The city of Dublin

Georgian Dublin was a booming city. In this article, Finola O'Kane looks at the ways in which the Irish capital was shaped by its topography and represented in topographical art.

Dublin is built along the River Liffey that flows into a great bay that lies in the lee of a range of mountains to the south. As Ireland’s capital, if not always the capital of a nation state, by the mid-18th century views of Dublin attempted to place the city in a wide maritime and economic context. Such positive viewpoints coincided with Dublin’s golden Georgian age of architecture and urbanism, when a visionary series of public streets and buildings established its identity as the second city of the British Empire. The design achievements of the architects Richard Castle, Edward Lovett Pearce, Thomas Cooley, James Gandon and others had established Dublin at the vanguard of Georgian public architecture and through the Wide Street Commissioners, urban planning.[1] Caught between the rising isthmus of Howth and the gentle slopes of the Wicklow Mountains, Dublin was often compared to Naples in the 18th century. Reaching a population of 200,000 in 1800 it was then the sixth largest city in Europe and the third largest port city.[2] River cities by the sea face a variety of physical and perceptual challenges. Caught between two bodies of water, this duality of origin, form and aspect informs their design. Floods and tides together create zones of hydraulic complexity requiring solutions of technical and legal ingenuity. The beauties of a sea prospect cannot always fight off the temptation of land reclamation and perfect ring road circulation is foiled by the topography. Conceived visually as urban landscapes from an early date, such cities’ topographical reality cannot be easily captured in two-dimensional plans.

Early maps of Dublin generally described an expansive landscape setting, taking the city, the bay and much of the surrounding countryside as their subject area. Charles Brookings’ map of 1728 was accompanied by A Prospect of the City of Dublin from the North, setting in train the pronounced preference for prospects from north to south rather than the reverse. By the mid-18th century Dublin’s prospect points had evolved into three notable zones – the view from the sea; the view eastward from the promontories of the Phoenix Park, and the view southwards towards the Wicklow and Dublin mountains, which slowly veered out into the bay. 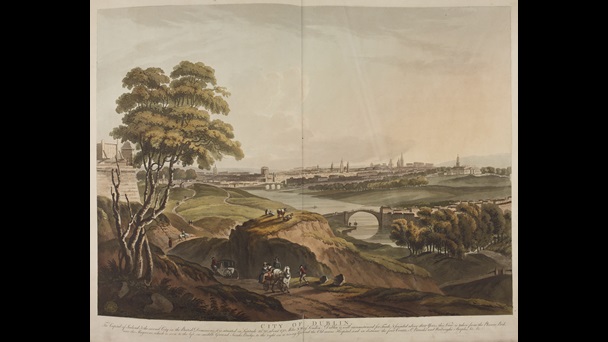 The view from Phoenix Park of the city with its spires and the domed Four Courts, c. 1790. 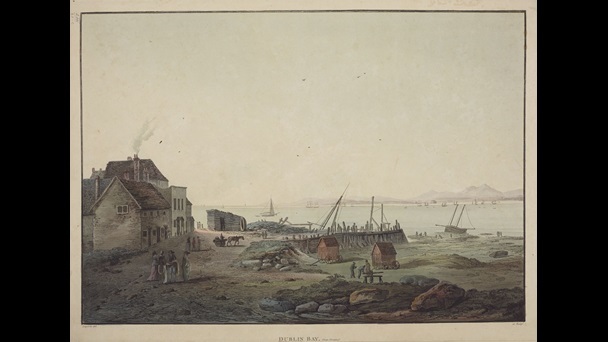 The bay to the east of the city played a crucial role in securing Dublin's maritime identity.

This swivel to the sea was indebted to the city’s growing pride in its maritime identity. As a port city it drew comparative inspiration from the other great port cities of Europe, particularly Amsterdam, the richest and most successful trading city of the 17th century North Atlantic. Richard Castle, architect of the majority of Ireland’s mid-century country houses, recommended his talents to Irish gentlemen by referring exclusively to the knowledge he had acquired from Dutch projects and sources in his Essay on Artificial Navigation.[3] Many Irish gentlemen had fought in the Low Countries and had witnessed at first-hand the extraordinary feats of Dutch hydraulic engineering. Amsterdam’s success probably made it reasonable to embark on substantial land reclamation projects in Dublin, despite the fact that Dublin had large areas of land that did not require drainage.

Dublin’s swivel to the east was also indebted to the power and sway of its two great eastern landowners: the Gardiner family to the north east of the city, and the Fitzwilliam family to the south east. The Duke of Leinster had made the first significant genteel commitment to a sea prospect in 1741, when he commissioned Richard Castle to build Leinster House for him, with its garden front looking towards a sea vista. This was a relatively short-sighted commitment in that, unlike Lord Aldborough, who later built a similar villa on an opposing north side location, Leinster did not own the entire site upon which he built his townhouse. The site was in the possession of the Viscount Fitzwilliam of Merrion and his subsequent heirs, and it was under their prospects that the eastern bias of Dublin city began to develop, while also confirming the bias of the city's northern quarter. The development of these low-lying eastern areas by predominantly genteel housing developments gave Dublin an unusual structure. In direct contrast to both London and Paris, Dublin’s wealthy lived close to the sea and the east end gradually became the most attractive part of town:

‘It is here necessary to remark, that the eastern side of the City, contiguous to the sea, is almost entirely laid out in elegant streets, for the residence of the gentry: and the western side, though more remote from the sea, and consequently not so conveniently situated for the purposes of commerce, is chiefly inhabited by merchants and mechanicks’.[4]

An anonymous 1790 print of Dublin city (above) positioned the city in precise terms: ‘The Capital of Ireland, & the second City in the British Dominions, it is situated in Latitude 53: 20’, about 270 Miles N.W. of London’. Finding Dublin also to be ‘well circumstanced for Trade, & founded above 1600 years’, the view was taken west of the Magazine fort in the Phoenix Park looking eastward towards Dublin Bay in the hazy light of early morning. The blue outline of the Wicklow Mountains frames the city on the left hand side but, unlike the many views taken from this prospect point, the mountains are not balanced on the left hand side by the Hill of Howth, but by a large tree, with a red-coated sentry standing on the parapet walk to peep through the branches. Two cows together with their lounging drivers watch the river as it snakes under the delicate arch of Sarah’s Bridge to the old Dublin suburb of Chapelizod, to reach the distant city. There, James Gandon’s great dome of the Four Courts is set off by Dublin’s many spires, the most prominent, if not the tallest, being that of the Royal Hospital, Kilmainham, on the right hand side. This great public commission from the architect Thomas Burgh housed deserving old soldiers, a quite specific category of the caption’s ‘old men’.

Many views of Dublin’s great public buildings were produced towards the end of the 18th century. Thomas Sautelle Roberts took a close view of the Four Courts from the south bank of the Liffey, remarking that it had been begun by Thomas ‘Cooley and completed by Gauden [sic]’. Looking westward upstream, he structured his image in the approved picturesque manner with ‘the front’ ground showing the ‘ruins of the Coal Quay Bridge, as they appeared after the flood, in December: 1802: in the middle ground Blood Bridge, and beyond that Queens Bridge: a distant view of the Saluting Battery, and Phenix Park terminating the whole’.

A south view on the River Liffey, Dublin 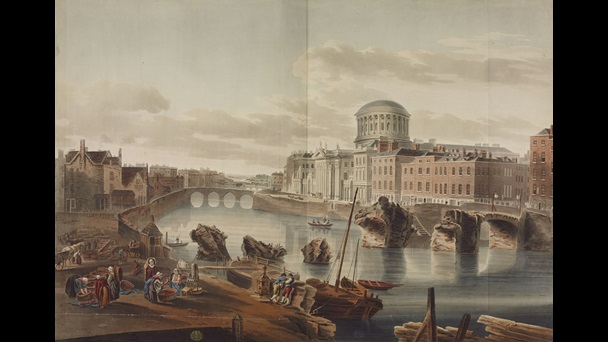 The quayside with the ruins of the Coal Quay Bridge and James Gandon's Four Courts.

James Laporte took his view of Dublin bay (above) from the northern seaside suburb of Clontarf, not far from the small Casino that William Chambers designed for a similar if more elevated prospect. Arthur Young also admired this prospect ‘of a noble river crowded with ships moving to and from the capital’ with its ‘shore spotted with white buildings, and beyond it the hills of Wicklow.’ By then the ascendancy of the sea prospect was such that Young thought that it ‘would be more perfect if the city itself were planted out’ by vegetation.[5] Laporte seems to have been of a similar frame of mind. He carefully included the long line of the south wall, built to guide ships safely through the dangerous bay, but only the edge of Dublin city is visible to the far right and none of its distinguished public buildings. He did carefully draw the south wall’s terminus in a small lighthouse. This was also used by the artist Jonathan Fisher as his first plate to guide readers into Ireland, as well as into Dublin, in his important book of views, Scenery of Ireland (1795), the first to depict the whole country visually.

Of Fisher’s four views of Dublin he singled out Plate 37, of the ‘approach to the City of Dublin from the north and north-west’ as having the ‘advantage of comprising in one view the City and Bay, and also the beautiful boundary of its Bason to the south, extending to the island of Dalkey.’ Close to that admired by Young and depicted by Laporte, it shared their concern to show Dublin Bay 'richly decorated with villas and improvements from the water edge up the rising grounds, so as to have the appearance of a continued City'. The bay’s growing landscape of genteel leisure is revealed in the wooden wheeled bathing houses positioned close to well-dressed women admiring a trader’s stock of fabric while another lady in a pink-toned dress may be negotiating a fee for their use. Drawn into the sea for the polite and private enjoyment of sea bathing, they ensured that any occupant was discreetly screened from the fishermen and cockle-pickers that congregate around the ramshackle timber quay.

As the 18th century drew to its revolutionary close, a constant state of military tension initiated much ‘map work’ of both Dublin and its setting by the British Ordnance.[6] Countless new barracks, forts, martello towers, batteries and magazines were drawn as dark figures against a pink city ground in such maps as Major Fryer’s 1813 Sketch of Dublin and its Environs.[7] Artists and engravers set out to frame Dublin’s expanding military landscape as a series of polite views, depicting the predominantly military buildings from multiple points of view, most of them ungainly and few of them picturesque.

The Salute Battery in the Phoenix Park 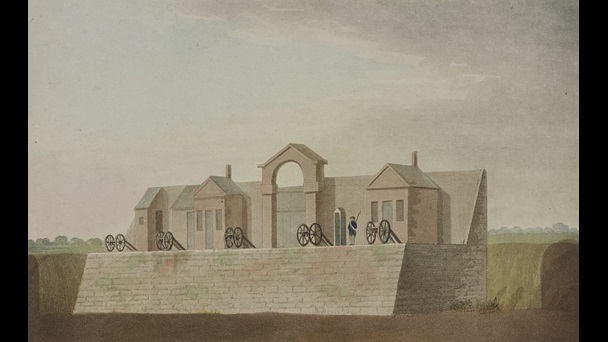 Two matter-of-factual views of the Battery, by Francis Jukes.

Francis Jukes also reverted to an older and more topographical and architectural tradition of drawing to do so. His first view of the Phoenix Park’s Salute Battery was intended to correct any misapprehension of the true height of the battery’s platform wall, ‘otherwise it would appear at some distance, as if the cannon were planted on the high road, which runs before it, close to the ditch’. In his other view of the Salute Battery, although he admits that the Battery ‘exhibits an irregular and confused appearance’ he evidently was not concerned enough to improve it, save for a few stray cows. This makes it unconvincing as a picturesque image, despite the token presence of middle and rear ground, which the first view did not even attempt. Such concern for a correct and informative representation of space is characteristic of topographical drawing, and topography continued to be sustained or revived in situations that called for an older, military or colonial cast of mind.

Dublin’s history as a contested space of empire, grinding ‘different versions of what Britain should be’ together, over and over again, reveals topography to be a more oscillating and strategic practice of place-making than a stage in the narrative of landscape painting.[8]

[6] See Felicity Myrone, ‘“The Monarch of the Plain”: Paul Sandby and Topography’, in John Bonehill and Stephen Daniels (ed.), Paul Sandby: Picturing Britain, (London: Royal Academy of Arts, exhibition catalogue, 2009), p. 57, for a discussion of the role of ‘map-work’ in both the evolution and denigration of topographical drawing.