Mikael Ahlund explores Johan Fischerström's 1785 description of Lake Mälaren in Sweden, which includes one of the first recorded uses of the term 'picturesque' in Sweden.

Utkast til Beskrifning om Mälaren (‘Draft for a Description of Lake Mälaren’) was compiled in 1782 by Johan Fischerström (1735–1794) and published in Stockholm three years later.[1] It is a poetical once prosaic description of the landscape around Lake Mälaren in central Sweden, written during a sailing trip from Stockholm to the town of Torshälla, undertaken in the late summer of 1782. The author describes the specific nature of the lake landscape and the character of the places and villages that he encounters on his voyage. Fischerström’s book is a marvellous blend of different themes – scientific ambitions in the tradition of Carl Linnaeus, the promotion of certain political ideas, and a sensitivity to the new picturesque ideals of the period, expressed here really for the first time in Sweden. Johan Fischerström was active as a journalist, writer and debater and published frequently on a number of various topics – poetry, politics, farming methods and rural economy. He had connections at the court of King Gustav III and was a member of various societies of letters and science. His tragic relationship with the Swedish poet Hedvig Charlotta Nordenflycht was already causing comment in his lifetime. 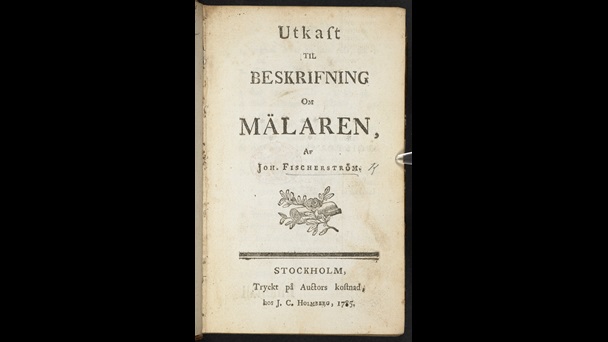 Johan Fischerström's text Utkast til Beskrifning om Mälaren (‘Draft for a Description of Lake Mälaren’) was the first picturesque description of the Swedish landscape.

With his description of Lake Mälaren Fischerström was one of the first in Sweden to express, in writing, an aesthetic interest in the northern wilderness. He describes how the lake landscape with its ‘clearings, smiling meadows, vast fields of grain’ is interrupted by another face of nature, presenting itself ‘in all its wildness’. In Fischerström’s account this versatility of the Swedish landscape is recognised as an appealing quality and described with repeated allusions to landscape paintings – in a general picturesque terminology, but also with specific references to the Swedish landscape painter Elias Martin (1739–1818):

Those who travel on Lake Mälaren will find so much that deserves attention. Picturesque vistas, peculiar contrasts, the most pleasant views over wide waters in between numerous islands and skerries – the most attractive perspectives over several straights and narrow passages. A glimpse of a church is followed by that of a castle or a manor house or scattered farmhouses, not seldom having the most beautiful locations. At times, the beaches are high and forested, at times flat and shallow. In numerous places the nature appears in all its wildness, in other places one sees nothing but clearings, smiling meadows, vast fields of grain. Almost everywhere are views, worthy for Martin to paint.[2]

Fischerström also pays attention to various meteorological phenomena and remarks on climate, wind directions and currents, alternating his observations with comments on the beauty of cloud formations and water reflections. With great sensibility he describes the shifting light, sunsets and sudden weather changes. On the first of September 1782 he makes the following observation:

The entire morning the weather had been calm, the air was mild, the sky slightly cloudy. It was raining when we passed the skerries at Vaxängskären; but we had barely sailed past these small islands, when the sun at once broke through, coloured the sky, scattered the clouds, enlightened the heaven and spread over everything its beneficent rays.[3]

Apart from this sensibility towards the ever-changing character of the atmosphere and the landscape, a more scientific gaze and a connection to the works of Carl Linnaeus is evident in Fischerström’s accounts of the geology, plants and animals of the lake landscape, a number of which are listed in a separate supplement to the text. In these passages the links to Linnaeus’ travel descriptions from various parts of Sweden, published some decades earlier, becomes obvious. Fischerström’s text is also clearly rooted in an 18th century context through the constant stressing of the usefulness and benefits of various plants, trees and natural phenomena described, connecting his book to the utilitarian ideology of the period. In this way Fischerström’s text constantly twines together scientific observations, enthusiastic descriptions of the beauty of nature, references to landscape art and arguments for political reforms that promote a rural economy based on agriculture rather than on urban businesses and industries. These opinions are here frequently accompanied by reflections on the healthy and unpretentious manners of the countryside, followed by repeated critique of life in the cities.

Another important theme in Fischerström’s text concerns various patriotic issues and touches the question of a national identity. At the end of his book, the author indignantly reflects upon the contemporary lack of appreciation for the beauty of the Swedish nature:

So now my trip through the beautiful Lake Mälaren was coming to an end, at last I had got a chance to see a good deal of the pleasing views of this lake. - - - - In France and England a lake like Mälaren would have been immensely celebrated in both prose and verse, of the finest minds. In Sweden we are so insensible to our own country! No description of the prettiest among lakes![4]

Fischerström is here perhaps referring to James Thomson's poem The Seasons and the numerous works it inspired in describing the nature of the Thames valley. On a number of occasions Fischerström returns to this disregard of the Swedish landscape among his countrymen and in these passages the focus on nature sometimes is broadened to include questions about the character of people and nations.

It has now among many started to become a habit to criticise the Climate, the Country, the People - - You who speak with such a disgraceful language, know – that the Climate is good, if not for weaklings; the Country has excellent localities, if they are wisely utilized; the People – what? Is there any nation in the world that in virility, honesty, patience and flexibility surpasses the Swedish?[5]


In Fischerström’s book a pattern emerges that was to be repeated in several subsequent travel descriptions and place oriented publications – the country's undiscovered beauty and benefits are contrasted against the conditions and attitudes in other countries. The description of the Swedish landscape becomes an instrument of a national self-assertion in which the characteristics of nature are associated with notions of a specific Swedish identity.

By combining patriotism, utilitarian thinking and a scientific approach with a pronounced aesthetic experience of nature, Fischerström introduced something new in the Swedish topographical literature, which he also self-consciously points out in his preface. Above all, his book introduces a new sensibility towards the characteristics of northern nature – his use of the word ‘picturesque’ is among the earliest recorded in the Swedish language. With Fischerström’s emphasis on the beauty and the aesthetic qualities of his native country, he opened up for new ways to observe and describe the Swedish landscape. In this he was soon to have a number of followers.