The Ground Glass: Landscape Art, the Camera Obscura and Photography

With reference to collection items in the British Library and beyond, photographer Michael Collins shows how the portable camera obscura was used as a drawing aid by landscape artists of the late 17th and 18th centuries.

The camera obscura, at its most literal and basic, is a darkened room with a pinhole in an exterior wall through which light passes, forming an inverted image on the interior wall opposite. Using a lens sharpens the image. Using two lenses, or a lens and a mirror, corrects the inversion. Such a projection has all the wonder and colour of a slide show, complete with the startling vivacity of an actual scene abstracted from real life. It not only displays this as a flat likeness with correct perspective, which can be traced, but it reduces the tonal range to a smaller spectrum (similar to the effect of slide film), presenting the artist with a more cohesive array of colour. Historically, the use of the camera obscura has been under recorded and despite recent research the full extent of its application and impact remains unclear. It has often been regarded as the precursor to photography, and analysed primarily within the context of the invention of photography. This overlooks the influence of the camera obscura on art, especially landscape art, and how this influence on landscape art influenced – and was influenced by - early landscape photography.

Piazza and Church of Santa Maria Forisportam in Lucca 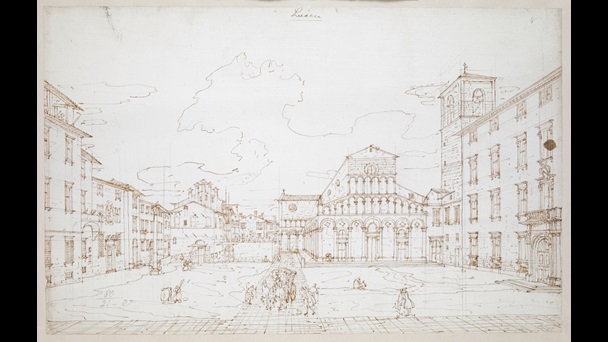 The histories of art and photography have been treated as separate highways, heading off in their own directions, and to this day they’re kept in discrete departments, on their own shelves and walls, which is as logical as partitioning painting from drawing. Theirs is a shared history, perfectly exemplified by the influence of the camera obscura. As landscape developed from fictitious to factual depiction, from setting to subject and from generic vistas to specific views, there was an incremental onus on the accuracy of the portrayal of actual places. As far back as Dürer and beyond, artists had made use of optical aids and surveying methods to make precise depictions. By the 18th century, partly through improvements in lenses and design, making the camera obscura more portable and practical, modifying it from a darkroom to a tent to a box, and partly through the vogue for the architecturally intricate in perfect perspective, it became used more and more. Canaletto employed one to great effect, and in Britain it was taken up by topographical artists such as Thomas Sandby. 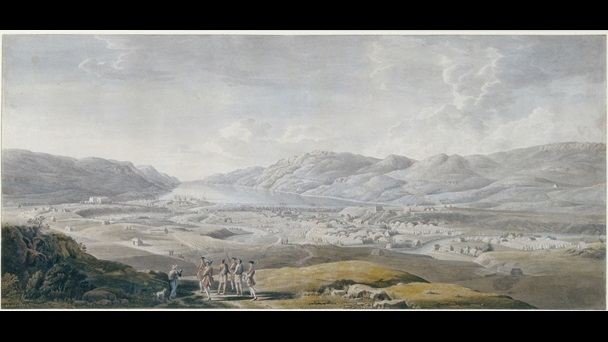 When the Duke of Cumberland commissioned Thomas Sandby to draw Fort Augustus in 1746, they were following a rich tradition in the history of Dutch military topographical landscape art that was made with or influenced by the camera obscura. Constantijn Huygens II, a skilled lens maker and draughtsman familiar with the camera obscura, who served with Willem III on his military campaign in 1672, made a series of landscapes that bear the hallmarks of the instrument. In his View of the Ijssel (The Courtauld Institute of Art Gallery, London) the carefully delineated details of the landscape fill the middle band of the small sketch, while the foreground is vague. There are traces of preliminary graphite, subsequently reworked in pen. By focusing the camera obscura on the middle distance, the foreground would be too blurred to trace, and consequently left ill-defined. This is characteristic of middle to far distance landscapes that are known to have been made with a camera obscura, for example Thomas Sandby’s Windsor from the Goswells drawn in a Camera of the 1760s (Royal Collection Trust).

View of the Ijssel 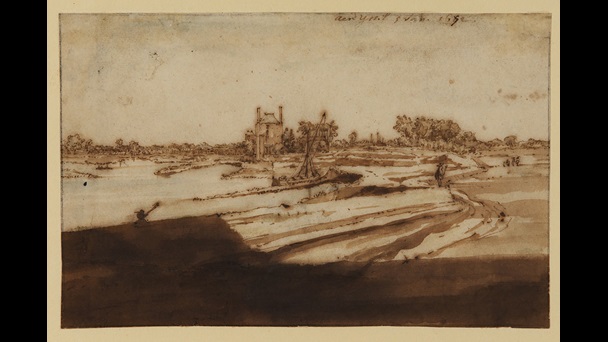 Held by© The Samuel Courtauld Trust, The Courtauld Gallery, London

Thomas Sandby’s two pictures of Fort Augustus, depicted from a far vantage point, appear to have been drawn on a camera obscura. Each focuses on the distant layout of the fort and encampment, which are rendered in sharp detail. Both of the foregrounds are topographically insignificant and have a swathe of darkened land populated by various characters – tropes – which together serve as a repoussoir to lend depth to the picture plane. Thomas Sandby’s views of Nottingham Market (1740–50), recorded as having been drawn with a camera obscura, have a similar composition. Such is the emphasis on the middle distance in these particular views, however, the acutely defined cityscape is unanchored, almost floating in space, looking as unreal as the architectural plans of Poundbury. Placing flunkies making small talk in the foreground (a forte of his brother Paul) in theory compensated for the nether ground, but unlike the figure in the German Romantic tradition, rather than leading you into the picture, they undermine its realism.

View of the market place of the town of Nottingham 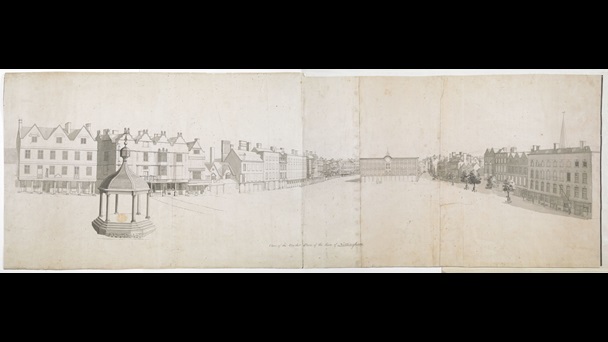 This is one half of a 360-degree view of Nottingham Market, produced with the help of a camera obscura

Thomas Sandby’s Nottingham Market is lost in space but not in time. His view from the west shows long shadows cast from the south, as does his view from the east, explicitly portraying a time of day and, through this, a sense of the actual then and there. In 1675, Valentijn Klotz, a military engineer, made a series of 18 drawings of the town of Grave after its bombardment. His view of the wrecked church depicts the ruins in the stark light of a low sun, the advance of the deepening shadows arrested, like the toll of a bell suspended mid chime. Formally, it’s also the kind of image that appears in a camera obscura. Such a projection shows the shadows more emphatically than normally noticed in everyday life, because the image is one long look, not a series of observations, and in this one look, the eye is not moving and adjusting from light to dark areas in order to see deeper into the shadows. This is one reason why a photograph taken in bright light has apparently more contrast and blacker shadows. It’s also an aesthetic arising from drawing or painting sur le motif, when whether for sombre effect or the authenticity of reportage, the artist’s fidelity with the light instils a sense of being out there in the open air.

Whether Klotz used a camera obscura is not known; drawing parallels from his Grave sketch stretches conjecture. But if the influence of the camera obscura is analysed in the context of its increasing role as a drawing aid for sur le motif sketches, it is revealing to compare the characteristics of the image produced in a camera obscura with the developments in this genre of painting and drawing.  Formally, the Grave sketch completely fills the frame, almost welling up out of it. This is a distinctive trait of how such a scene would appear in the rectangular image of the camera obscura. Just as on the ground glass of a view camera (its distant descendant), the rectangular frame of the camera obscura establishes the content and the limit of the composition; everything that is within it is included, nothing outside it exists. The edges of the frame are absolute boundaries. So too, it can be argued, are the limits of the artist’s paper, board or canvas. But how were such compositions conceived, how was the content and its extent envisaged? This study should not be confined to the camera obscura; Constable, for example, used a glass drawing frame based on the one in Leonardo de Vinci’s Treatise on Painting (1540).

In 1765 Paul Sandby worked on a series of pictures of Luton Park, the Duke of Cumberland’s estate in Bedfordshire.[1]These woodland scenes are unlike any of his other compositions. This is no view staged at a polite distance with some rural types manning the foreground. You’re in the woods among the trees. Trunks and branches and foliage fill the space in front of your face, and are so all encompassing, the trees are sliced abruptly by the edge of the frame. This is exactly what it is like to see such a scene on a view camera. Imagine being in a clearing and pointing the camera into the woods. When you put your head under the dark cloth, what you see on the ground glass is a rectangular scene cut out from its surroundings, the formal equivalent of these Luton Park pictures.

Some of Francis Towne’s watercolours of the Colosseum from his trip to Rome (1780–81) have this same kind of composition. Although there appears to be no account of Francis Towne using a camera obscura, a 'Small Mahogany Camera (imperfect)' was listed in his probate inventory. His No. 21 Inside the Colosea features a vaulted gallery receding off to the far right and an open view on the left exposing vegetation and ruins under a wintry Mediterranean sky. An architecturally exact drawing of an elaborate series of arches supported by vast piers, the stone ceiling stretches away, curling overhead, enveloping the viewer in the composition in much the same way as Sandby’s woodland scene. In Towne’s watercolour, the sepia light and subdued shadows are as true-to-life as the millennia of wear and weather on the masonry. Emphasising the fidelity of this artistic report, he records that the picture was made 'Decr 22nd.1780..from 11 till 1 o clock'. Noting date and time and conditions ('evening sun from the left Hand'), he often included the term 'taken on', which although in current usage infers the use of a camera (or camera obscura), back then had no such definitive interpretation. Towne used the term 'drawn' more often than 'taken', and in eleven instances, used both. Nonetheless, to 'take' a view infers observing and composing from the real rather than the imaginary, possibly with the benefit of an optical aid. 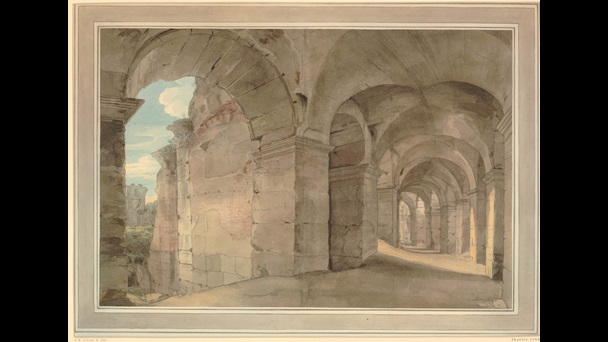 The geographically accurate landscape became known as 'topographic' because it purported to depict an actual place and as such, the picture’s veracity could be compared with the view itself. Pejoratively, this genre was sometimes termed 'mappy'. But the Grand Tour encouraged an artistic obsession with antiquities and archaeology, culminating in Neoclassicism, and this infatuation cherished art that was based on Classical remains, and the more accurately, the better. Whether topographically exact landscapes or architecturally precise structures, the paintings and drawings that emerged from the Grand Tour became more explicitly empirical. In contrast to the Romantics’ heightened realism or John Varley’s recipe that ‘nature needs cooking’, Francis Towne's pictures from those two years in Italy, although set in the elegiac light of eternal Classicism, are more down to earth. 'A Ruin on the Road to the Ponte Nomentana, 12th December 1780, 2-4 pm' has all the apparent fidelity of a tracing from nature, in gentle pen and ink and understated watercolour, as observed in the raking light of a December afternoon, a half century before Fox Talbot’s Pencil of Nature recorded in silver the fleeting image on his camera obscura with photography.

Much of the mystery of the camera obscura’s influence remains unexcavated in the art produced on the Grand Tour. The developments in Western landscape art arising over the course of that two hundred year history came to a head with the invention of photography. Whether formed within a camera obscura or made directly from a photograph, the flat image produced through a lens was at large. The definitive, truncated framing, the fluid handling of light and shade, and the unforeseen mass of detail that the image through the lens reveals, inspired new standards of composition and realism, and questioned what those new standards meant.