The British Library’s topographical drawings that survive from the 16th century, in particular those of the Cotton collection of Tudor manuscripts, make clear that the principal use found for such draughtsmanship was in the service of national defence. When record keeping was required, instead of written topographical descriptions, surveyors, military planners, builders and, later, landowners turned steadily and increasingly in the course of the 16th century to drawn records. Surveying and engineering practice might in fact make little distinction between topographical prospects drawn from a bird’s-eye viewpoint and maps presented, as they most commonly were, in diagrammatic or pictorial form.

With improvements in surveying instruments and mapping techniques, and with the growing popularity of the landscape and ‘prospect’ painting offered by immigrant Dutchmen and Flemings in the mid-17th century, cartography and topography moved further apart. One might say that the vantage point of mappers moved higher and that of most topographers moved lower.

Many of the Cotton maps and bird’s eye views were prepared at royal command and had a military or naval purpose. One of the most accomplished is a view of Dover harbour which it is now thought may have been the work of the English military engineer, Richard Lee. Drawn in September 1538, it is part of a group of such ‘platts’ which date from the period following the break with Rome when foreign invasion from across the Channel presented a very real threat. Henry VIII and his military advisers had need of up-to-date and accurate surveys of the country’s coastal defences. Much emphasis is given in the Dover picture-map to the lay-out of the newly improved harbour works, and, because the picture could give only estimated dimensions, it is supplemented with notes and measurements (‘the couth est Jette conteneth in length viij hundredth and twenty footes). The view beyond the distinctive pink-wash sea, showing Dover town and castle with the cliffs and downs, forms in itself an attractive watercolour landscape.

View of the harbour, town and castle of Dover 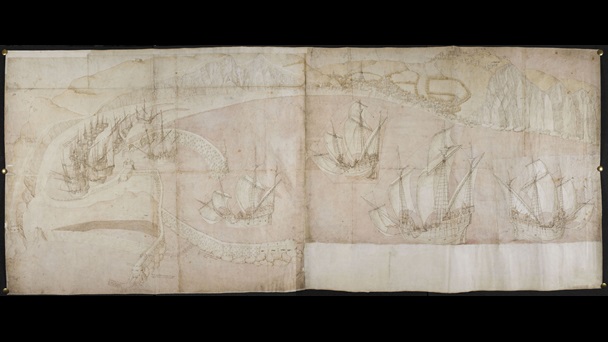 Richard Lee drew this view of Dover at a time of high tension in England, when the threat of foreign invasion was omnipresent.

A later Tudor example in this tradition of military at-a-glance views of coastal fortifications is the coloured plan or bird’s-eye view of Carrickfergus in Ulster. Although the view shows interesting topographical details in the town with its market cross and bee-hive shaped huts, it centres on the castle and harbour defences. The main purpose of the drawing was undoubtedly to show their ruinous state – ‘so fare in decaye’ as the energetic constable of the castle William Peers complained to all and sundry. The complaints (and perhaps the drawing) had their effect in the face of Elizabeth’s notoriously miserly bureaucracy: by 1568 the castle had been repaired, the garrison increased and the buildings of ‘the freres’, the former friary seen to the north-east of the town, converted to a fortified depot.

The castle and town of Carrickfergus, Ireland 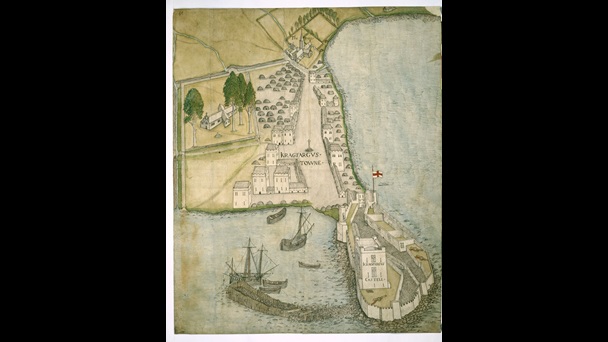 The dilapidated castle is the focal point of this sixteenth-century view of Carrickfergus.

John Rogers, master mason, military engineer and surveyor of the fortifications at Hull and Berwick, was almost certainly responsible for a striking bird’s-eye view of Hull Manor House, executed in 1542 or 1543. Improvements were proposed to this royal manor, as a result, no doubt, of Henry VIII’s visit in the autumn of 1541, and Rogers’ drawing may well have been in this connection. 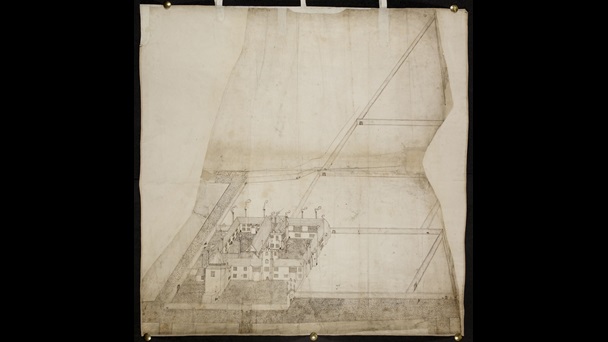 In the age of Vauban and the ever-increasing elaboration of city and harbour fortification, there could be no let-up in the flow of assessments and reviews by military surveyors. A good example is the work of Thomas Phillips, master gunner and engineer, whose deft hand and cultured eye enabled him to turn in some of the most handsome pictorial reports of his day. Part of Colonel George Legge’s ‘Present State of Guernsey with a short Accompt of Iersey’ (1680), for which Phillips also produced charts and soundings (‘Tryly layd down as they wear surveyd and Mesured by T P’) were nine watercolour views by Phillips. These are not aerial picture maps, but on-site prospects of a number of Channel Island towns and forts taken from ground level in such an accomplished manner as to confirm that military draughtsmen too had learned from Hollar and artists from the Low Countries. 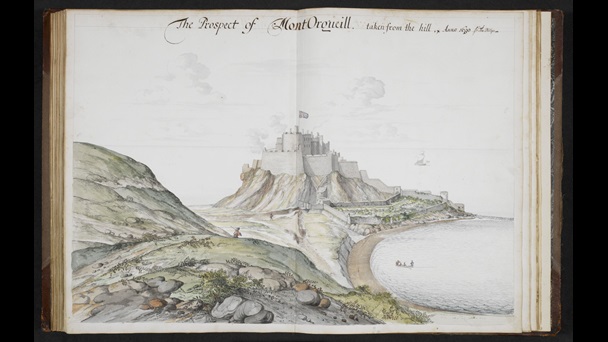 One of several extremely accomplished views of Jersey and Guernsey by the military engineer Thomas Phillips.

Slightly later is a ‘Survey and Description of the Principal Harbours’ of south-east England drawn up for William III in 1698. It is an impressive volume, cataloguing and picturing with some precision naval properties and recently improved dockyards in the Thames estuary and along the south coast, with large prospect views, by an unidentified hand, of, among others, Chatham, Portsmouth and Plymouth. It closes with a neat coloured drawing of the Navy Office itself, off ‘Crutcht Fryers Street’ in the City of London. This was erected in 1683-84 to Sir Christopher Wren’s design, to replace the building where Samuel Pepys had worked and lodged and which was burned down only a half dozen years after surviving the Great Fire. 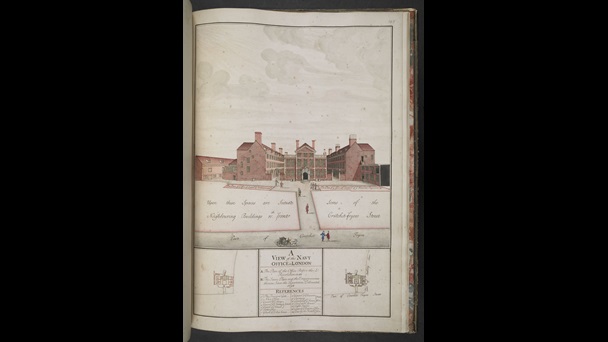 Christopher Wren's Navy Office, from a ‘Survey and Description of the Principal Harbours’ (1698).

It was accepted by military and naval authorities that a reconnaissance drawing of a place made on the spot provided more reliable intelligence than any written accounts. Soldiers and sailors who were able to draw accurately were therefore of great value not only for the preparation of essential maps, charts and elevations but for a lengthening list of functions ranging from the depiction of battle scenes to the illustration of instruction manuals. Samuel Pepys was among those who, at a time of rapid naval expansion, put their weight behind schemes to improve the quality of naval draughtsmanship. Pepys was prominent in the establishment in 1673 of the Royal Mathematical School at Christ’s Hospital, whose purpose was the training of boys for the navy. Here the syllabus came to include not only the science of navigation and mapping but also ‘the practice of Drawing for laying down the appearance of Lands, Towns and other objects of notice’. Pepys and Sir Christopher Wren also supported the proposal of the Christ’s Hospital governors in 1692 to introduce drawing-masters into the school and from 1705 the ‘Mathemats’ were given the benefit of their own professional Drawing Master. The Royal Military Academy at Woolwich acquired its first such master in 1743, and its most distinguished one, Paul Sandby, in 1768. Sandby held the post for almost 30 years and consequently was in a position to play as important a part in the development of military topography into the 19th century as he did in that of English watercolour painting. An unfinished drawing of the Royal Foundry is attributed to Sandby, done during his time as an army drawing master at its Woolwich neighbour, the Academy. 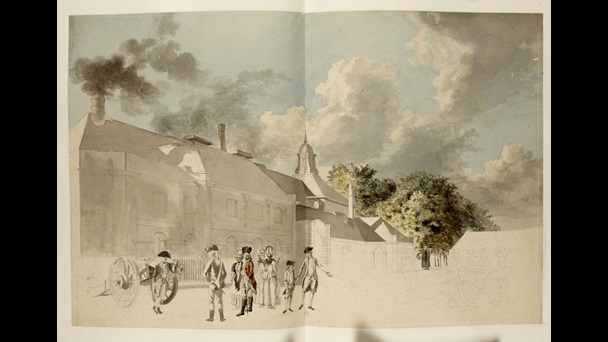 Paul Sandby's unfinished drawing of the Royal Foundry was begun while he was drawing master at the adjacent Royal Military Academy.

Paul Sandby and his older brother Thomas were from a cartographic background. Both had been attached as Board of Ordnance mappers to the forces of the Duke of Cumberland in Scotland after the 1745 Jacobite Rebellion. Paul became the official draughtsman of a team led by William Roy making a detailed survey of Scotland, which was thought desirable as part of a policy of strengthening central control. His hand is seen in many of the original maps of the survey now in the British Library, and he also produced a splendid illustration of the surveying party at work in the Grampian Highlands.