From 1800, London’s dock system was revolutionised, and many commemorative prints were published to celebrate the transformation. William Daniell’s prints of the new docks represented London’s modernisation in particularly exultant terms. Alice Rylance-Watson explores.

In the 1790s a formidable and influential merchant named William Vaughan (1752–1850) published a series of pamphlets advocating his ‘Reasons in Favour of the London Docks’.[1] He argued that it was high time for the city’s authorities to construct up-to-date docks because London could no longer cope with the influx of shipping which plied the Thames.

New docks were necessary as the current moorings were based around a collection of just 20 wharves, originally appointed in 1558 by Elizabeth I. The congestion was intolerable, the river traffic chaotic, the merchants and ship owners angry.

By 1760 the system had reached breaking point: the Pool of London’s capacity was 542 ships but it regularly squeezed in almost 2,000 vessels.[2] Spectators reported a ‘double forest of masts, with a narrow avenue mid-channel’ that sometimes closed in gridlock. Goods, domestic and foreign, much expensively imported from the Empire, often spoiled aboard because there were no facilities to unload and store them. Navigation was ‘frequently impeded, and the losses, damages, accidents, and plunder’ sustained were huge. Cargo was at the mercy of ‘river pirates’, ‘scuffle hunters’ and ‘mudlarks’ who stole and smuggled goods from ships waiting up to two weeks to be off-loaded.[3] Vaughan estimated that traders were losing between £2–300,000 per annum.[4]

‘Commerce, Shipping, and Revenue, for the Port of London…nearly trebled itself’ in the 18th century, Vaughan wrote, and formed ‘above three-fifths of the Trade of all England’.[5] In today’s money £13 million was made from trade imports in 1700 rising to £34 million in 1790.[6] Much of the stock came from the fleet of 1,000-ton East India Company ships, bringing prized commodities like tea, spices, textiles, furnishings and bullion from Bengal and China. Merchant frigates from the West Indies imported tobacco, sugar, rum, cotton and mahogany. Slave ships also passed in and out of the port.

On the eve of a new century, Vaughan argued that ‘England never had a fairer opportunity of becoming the great Depot for all Europe’.[7] ‘The Docks and Canal, as National Objects, would give Protection and Security to an amazing floating Capital’.[8] Never mind about the current residents of areas proposed to be demolished for the new constructions: they lived in ancient and rickety buildings on streets surrounded by wasted pastures, and were only ‘weekly or monthly’ tenants anyway.[9] It was their duty, Vaughan implied, to defer to the national economic good.

The merchant’s free-market rallying cry was heard and a Parliamentary report was produced in 1796 on his evidence.[10] Opposition came from individuals with vested interests in the current arrangements, but also from porters and car-men working on the bankside, from ‘lightermen’ who off-loaded cargo from moored ships onto smaller nimbler vessels, and from the owners of the original wharves and quays who would lose much of their business.

However, these objections were finally met and in May 1800 a bill was passed to proceed with a scheme of new docks. The Times reacted to Parliament’s announcement with praise: ‘It must be, it ought to be expected, that in the first city of the world, schemes of national amelioration are adopted’ to ‘increase commercial wealth’ and advance ‘public improvement and happiness’.[11] Ambitious plans were submitted from individuals from local boroughs, military surveyors and private companies of architects and engineers. 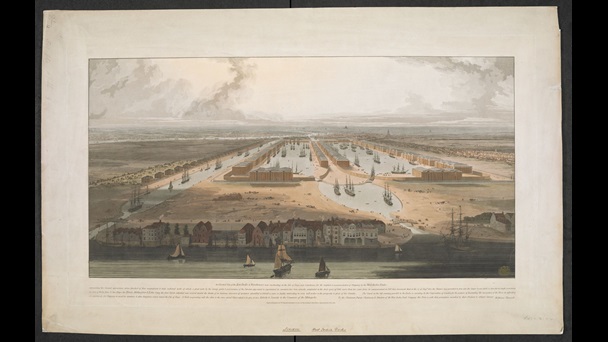 This aquatint, produced by William Daniell, depicts the newly built West India Docks on the Isle of Dogs in east London

West India Dock, designed by the leading civil engineer William Jessop, was the first to be constructed on the northern end of the Isle of Dogs. Finished in 1802, it was soon accompanied by Daniel Asher Alexander and John Rennie’s London Docks at Wapping (1805), John Rennie and Ralph Walker’s East India Docks at Blackwall (1806) and the 1807 Surrey Docks at Rotherhithe (designed by the ship-owner John Hall and endorsed by William Jessop).

Colossal walls fortified the new ports, capacious storage warehouses were built in their numbers, and a new police force was established to protect the river traffic and its valuable stock.[13] A raft of sub-industries mushroomed around the docks, from tradesmen supplying the everyday needs of port workers to larger productions refining sugar, processing tobacco and grinding spices and pepper.

An Elevated View of the New Dock in Wapping; A View Of The London Dock 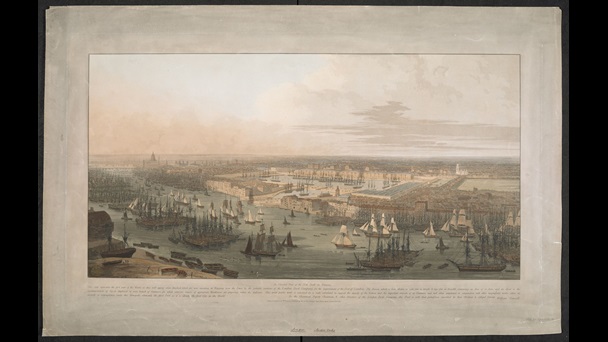 London Dock was built at Wapping to process goods from across the Empire like tobacco, rice, spices, wine and brandy

Entrepreneurial energies mobilised, the entire landscape of the Thames at London was transforming. The story of its transformation was told in a plethora of published prints depicting plans and views of the new docks. A large number of these are held in the British Library’s Maps department, within Frederick Crace’s and King George III’s collections. Particularly arresting is a series of seven coloured aquatints produced and published between 1802 and 1813 by the English landscape painter and engraver William Daniell (1769–1837).

In each of Daniell’s views the new docks are rendered monumental and vast, depicted from an elevated perspective and in a palette of austere, perfectly harmonised tones. Ships are arranged in orderly ranks: gone is the hectic jumble of displaced and weary behemoths straining with cargo from all corners of the Empire. The yards are tidy, the new warehouses perpendicularly aligned and fit for purpose. These are great cities within a city: rational, organised, and cleansed of disorder, dirt and thievery. London expands before the viewer as an almost infinitely spacious metropolis, free of congestion and bathed in an optimistic morning light.

A View of the East India Docks 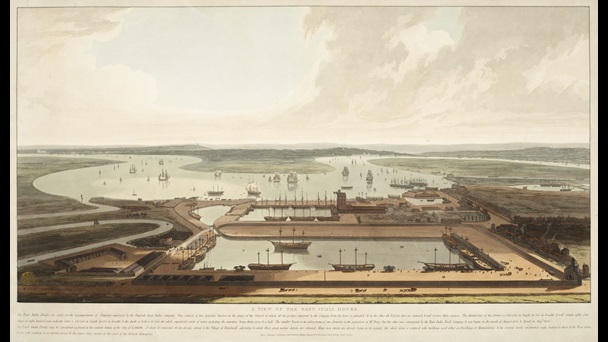 These docks were built exclusively for the use of the British East India Company, which traded mainly in the Indian sub-continent and Qing China

Daniell’s aquatints originated from his own 1802 painting of the Thames, which foregrounded George Dance’s proposed design for a new and modernised London Bridge (Guildhall Art Gallery, London). Dance’s concept was for a double bridge, which combined Roman classical features with the latest engineering initiatives. Though never executed, the British public perceived Dance’s design as visionary: the embodiment of a proud, prosperous and technologically advancing nation. The painting was exhibited at the Royal Academy and an aquatint was published to follow it.

View of London, with the Improvements of its Port 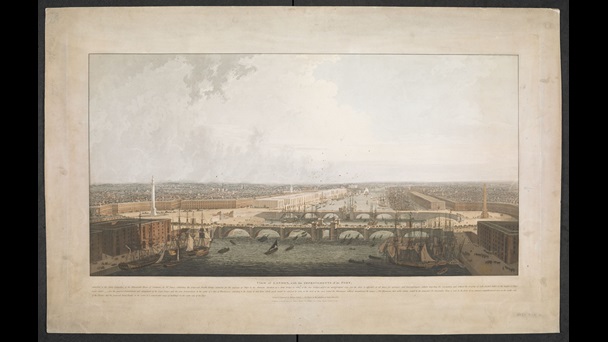 The prospect of Dance’s bridge was followed with an aquatint depicting the new West India Docks. The edition sold well, and Daniell was reported to have ‘cleared two hundred guineas’ from its sale.[14] He released the next two views in the series in 1803, with two more in 1808, and the final instalment showing Rotherhithe’s Commercial Docks in 1813. Daniell also produced a series of six complementary Views of London (1804–05) which cleverly exhibited the new order on the Thames. Again, vessels are shown neatly arranged and navigating in a cooperative system, implying efficiency, civic stability and financial success.

A view of the Commercial Docks at Rotherhithe 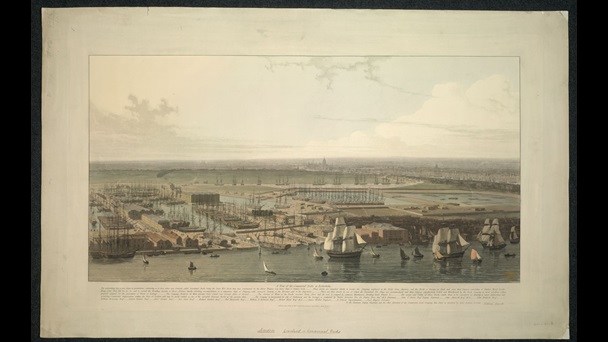 The Commercial Docks were principally used to manage imports of timber, corn, iron, tar, and hemp from Canada, America, Scandinavia and the Baltic

Daniell’s Views of the London Docks and Views of London were designed to appeal to a market demand for nationalistic imagery, produced and released simultaneously to approving newspaper reports and publications. They satisfied the establishment’s and the public’s appetite for affirmative pictures of Britain. Though contemporaries of Daniell satirised this triumphalism, his panoramas remain exultant, in line with City and parliamentary interests.[15] The Thames, newly modernised, becomes in Daniell’s representation the self-evident epicentre of a commercial empire.