The traveller and writer Jonas Carl Linnerhielm celebrated the natural beauty of the Swedish landscape within the picturesque tradition through his writings and etchings. Mikael Ahlund examines Linnerhielm’s three publications and reflects on the impact of the writer known as “the first Swedish tourist”.

Jonas Carl Linnerhielm (1758–1829) captured Sweden in the late 18th and early 19th centuries in his images and travel writings, with its countryside, lakes, ironworks, manor houses and gardens – nothing escaped his eye.[1] He has been called the first Swedish tourist and from 1787 he spent his summers touring the country, from Skåne in the south up to the province of Dalarna in central Sweden. On his journeys he brought with him pencils, brushes and sketchbooks, describing rural Sweden in hundreds of letters, drawings and watercolours. Following in the footsteps of his predecessor Johan Fischerström, Linnerhielm was one of the first in Sweden to undertake a voyage pittoresque – a journey in search of views and scenery that moved his sentiment and delighted his eyes.[2]

Linnerhielm was a landed gentleman with an estate in the southern part of Sweden, but he also held a position as a civil servant in Stockholm during the reign of King Gustav III. Here he became closely connected to the leading cultural figures of the Gustavian period and was deeply influenced by the Swedish artist brothers Elias and Johan Fredrik Martin – both of whom had experienced Britain and the London art scene in the 1770s. Alongside them, Linnerhielm developed an early form of open-air painting, recording in watercolours the natural scenery of Sweden and its shifting moods. Through the Martin brothers Linnerhielm's pictorial world had a clear link to the contemporary art of landscape and topography in Georgian Britain. His watercolours also formed a basis for the engraved illustrations in his printed travel journals, which he published in three volumes: Bref under resor i Sverige (‘Letters from travels in Sweden’, 1797); Bref under nya resor i Sverige (‘Letters from new travels in Sweden’, 1806); and Bref under senare resor i Sverige (‘Letters from later travels in Sweden’, 1816). 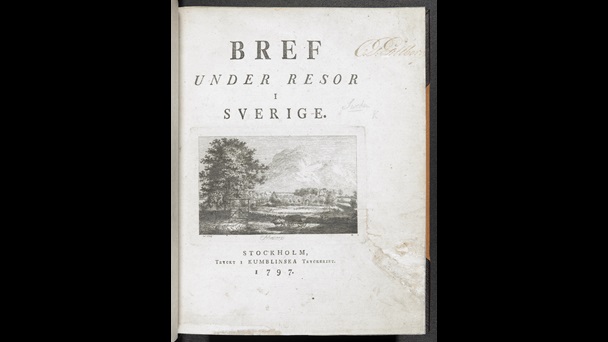 Jonas Carl Linnerhielm published his first volume, Bref under resor i Sverige (‘Letters from travels in Sweden’) in 1797, in which he compiled a decade’s worth of letters, observations, and sketches on the Swedish landscape.

Through his letters Linnerhielm stands out as the most diligent and stylistically sophisticated travel writer of the Gustavian period in Sweden. When his first volume was published in 1797 the preparations had lasted for more than ten years, with his earliest letters dated in May 1787. Stylistically, he was deeply influenced by authors such as Salomon Gessner and William Gilpin and through them he joined the European voyage pittoresque tradition that emerged during the second half of the century. With an everlasting energy he set out to study the specific Swedish landscape through the filter of the picturesque ideals. In the preface of his first volume Linnerhielm gives a clear description of his aims: ’I have travelled to see my Fatherland: to see it; not to do research; and I have written what I have seen.’[3] This statement can be appreciated as a deliberate attempt to distance himself from the more sober and scientific tradition of Swedish travel writing, initiated by Carl Linnaeus and others a few decades earlier. Instead of science and research Linnerhielm now stresses the visual and emotional experience of nature and his ‘delighted eye’ remains the focus throughout his letters. A countryside spring sunset in 1787 in the province of Uppland is described with the following words:

We arrived just when the sun had gone down. The afterglow still coloured the skies, which in varying degrees of clarity were reflected in the water, and this contributed not little to the beauty of the view. It was a gentle nature, just shaped for mild feelings; as if nature itself demanded man to enjoy.[4]

Such recurring sensibility towards the shifting evening light are often accompanied by references to the visual arts in his letters. In Sweden, as in the rest of Europe, the paintings by Claude Lorraine had by the end of the 18th century become a measurement of beautiful nature. When Linnerhielm on a September evening in 1787 reaches the banks of the river Göta älv in the southwest part of Sweden, he makes the following remark:

This neighbourhood was here in the evening glow so beautiful, and the setting sun illuminated for a while the surroundings with such an indescribable grace, that we thought ourselves standing before the origin of the imagery of Claude Lorraine himself.[5]

Linnerhielm’s search for the picturesque could from time to time take him beyond the pleasant countryside and give evidence to the new attitudes towards the untamed nature that developed in 18th century Europe. Also in this Linnerhielm follows Johan Fischerström, but his aesthetic appreciation of the northern wilderness certainly surpasses his predecessor. When Linnerhielm sets out from Stockholm towards the rocky coastal landscape east of the city, he first describes the pleasant prospects, open fields and beautiful manor houses that he passes. A little farther away, however, his account takes on a different character – he penetrates deep into the forest and descends dangerous paths between overgrown rocks and steep scarps:

Here, between the pines, that only time or storms have overthrown, you clutch into a narrow gorge of grim ferocity and impressive majesty. On both sides surrounded by tall vertical rocks, broken into forms that the painter's eye consider beautiful. Along the cliff walls proud oaks rise and in the cracks smaller trees have found space, shadowing the shabby moss here and there covering the cliff. [...] For quite a while I pushed forward into the solemn shadows of rocks and trees, through which glimpses of the sun only seldom penetrates.[6]

Standing in the midst of this wilderness, Linnerhielm describes a scenery highly reminiscent of the paintings by his friend, the artist Elias Martin. He also explicitly refers to the ‘painter’s eye’ to inform the reader how the scenery should be appraised. A spontaneous appreciation of the wilderness could not yet be assumed among all Swedish readers. 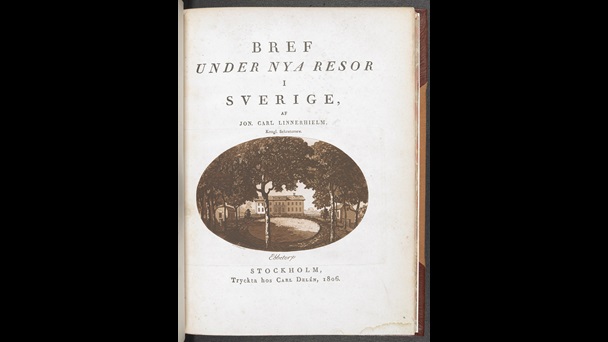 Apart from the countryside and the rocky wilderness, Linnerhielm dedicates a great deal of interest in the iron-producing regions north of Stockholm, describing not only nature itself, but also the mines and the specific ideal villages created by the iron-making barons around these early rural industrial sites in central Sweden. Describing these places, his travel accounts include detailed information on the architecture, technical installations and industrial processes. In May 1787 Linnerhielm visits the mine at Dannemora, which provided ore for many of these ironworks. In his description of the site Linnerhielm informs the reader about the power transmission and water pumps, and gives detailed information about the mine's depth, the annual production of iron ore and the number of workers. But despite his apparent fascination with the technical side of mining, it was something else that made the deepest impression on him. In the following description the objective interest in facts is abruptly transformed into feelings mixed with fear:

I cannot describe how frightful it was to look down to the bottom of the mine. It was a dreadful chasm, full of horror and abomination. Since the openings went right down, the depth and the consequent darkness made it impossible to see the bottom.[7]

When one of his companions allows himself to be submerged into the opening of the mine, the author trembles at the sight of the fragile barrel and the rope on which his friend's life literally hangs: ‘Imagine this, and you will feel the same dizziness as I did’, he writes. Here Linnerhielm follows an international pattern – descending into the frightening depth of mines became a popular pleasure mixed with horror among the elite in various parts of Europe and turn out to be a recurring motif in the voyage pittoresque genre.

The iron-production itself was located to certain villages in the region, where the industrial installations, housing for the workers and the central manor house with its garden were laid out as ideal communities – the specific Swedish rural ironworks known as ‘bruk’. In Linnerhielm’s letters – and in contemporary paintings by Elias Martin and others – these places are presented as sunlit and utopian societies, where glimpses of a pleasant nature frame the descriptions of prosperous and infinitely beautiful villages – such as Lövsta, Österby, Forsmark and Söderfors. Linnerhielm’s text, and Martin’s paintings, were part of a strong tendency to idealize these places during the 18th century.

Bref under senare Resor i Sverige 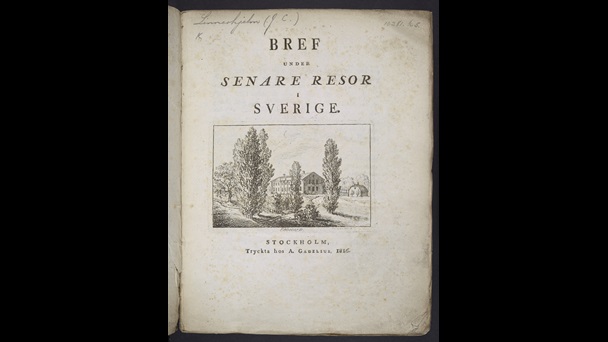 Bref under senare resor i Sverige (‘Letters from later travels in Sweden’) was the third and final collection of writings on the Swedish landscape by Jonas Carl Linnerhielm, published in 1816.

As in the case of the earlier travel account of Johan Fischerström, a patriotic theme is essential also to the writings of Linnerhielm. In the preface of his first volume of letters, he gives the following statement regarding the driving force behind his endeavour:

I have travelled to see my native country [...] and will I be fortunate enough to attract anyone's attention to the beautiful and picturesque locations that this country in a constantly shifting way presents, my purpose is fulfilled. Our Fatherland deserves it. [...] Quite wrongly an English author has considered the mountains of the North to be masses of frightful ferocity rather than scenes of grandeur and proportion.[8]

In this last sentence, Linnerhielm turns with resentment against William Gilpin’s disapproving view of the Nordic nature and his assertion that the mountains of Sweden and Norway are ‘rather hideous masses of rudeness, than Scenes of grandeur and proportion.’ With indignation Linnerhielm claims the opposite and continues:

We do not own the Alps of Switzerland, nor the  buildings of Rome, nor the statues of Greece; but our mountains often possess a grandeur and our valleys a smiling delight, our lakes prettiness and sweetness. The monuments of the North holds a Northern simplicity. They do not have the elegance or splendour of art, but they are often perfectly – just as majestic. See these ancient mounds that Time has not been able to destroy! On many of them still stands a stone, upright after so many ages.[9]

In his attempt to promote the beauty and the qualities of the northern nature, Linnerhielm follows a pattern that can be found in a number of Swedish topographical accounts of the late 18th and early 19th centuries. By using foreign comparisons the aesthetic qualities of the Swedish landscape are enhanced.

For more than thirty years Linnerhielm devoted himself to the task of describing and depicting the pleasant views and picturesque sceneries he encountered on the road during his relentless travels – views of his native country that had delighted his eyes and moved his feelings. In hundreds of letters, watercolours and engravings he created a marvellous record of Sweden during the reign of King Gustav III and during the following decades. Through his books he also reached out to a fair number of readers among the Gustavian elite, opening the eyes of a steadily increasing number of travellers and tourists, setting out to explore the beauty of their native country.