Sileas Wood offers an introduction to the tours, travels, and topography of Thomas Pennant.

Of the many 18th century figures associated with the British topographical movement, few loom as large as Thomas Pennant (1726–1798). Over the course of a 30 year career, the naturalist, travel writer, and antiquarian promoted the study of British topography beyond a parochial interest to a polite past time.

Thomas Pennant was born at Downing Hall, Whitford, Wales, in 1726, and was educated at Wrexham and Fulham grammar schools before continuing his education at Queen’s College, Oxford and Oriel College, ultimately leaving without obtaining a degree.[1] During his time at Oxford Pennant fostered his first great interest: the study of zoology, and more specifically, ornithology. In 1766 he published his British Zoology, a significant reference work which he continued to develop over the following 20 years, continually researching the natural history of Britain.[2] In line with the development of 18th century enlightenment thought, Pennant’s zoological works were grounded in careful observation and meticulous record taking. It was this practice of closely observing the natural world that motivated Pennant to undertake his first Tour, which would form the basis of his life’s work, researching and writing topographical works.

Today Pennant is best remembered for his Tours – journeys around the British Isles which Pennant recorded and published accounts of. During a period of 10 years Pennant travelled extensively in Britain, visiting Scotland, regions of England, and his native Wales. Pennant outlined his motivations for undertaking his first tour in 1769, published in 1771:

After publishing three volumes of the Zoology of Great Britain, found out that to be able to speak with more precision of the subjects I treated of, it was far more prudent to visit the whole than part of my country: struck therefore with the reflection of having never seen Scotland, I instantly ordered my baggage to be got ready and in a reasonable time found myself on the banks of the Tweed.[3]

Pennant’s desire to observe the natural world first-hand compelled him to undertake the near 300 mile journey, first from Whitford to Edinburgh, and then onwards travelling to Perth, Inverness, Fort William and Glasgow. During the three months of travelling Pennant carefully recorded his observations which appeared in print in 1771. 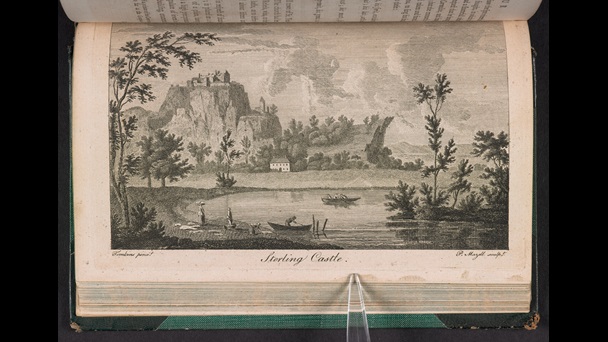 The concept of a ‘Tour’ and the associated travel writings which followed were familiar to Pennant’s readers. The Grand Tour remained a staple of 18th century polite society, and Pennant himself had completed a European Tour in 1765. However, Pennant’s decision to confine his first Tour to Scotland was highly unexpected, despite his warm expression of it as ‘part of my country’.[4] At this time, Scotland – unmapped and unknown – was very little travelled. Still reeling from the cultural and political backlash of the Jacobite rebellion which had been quashed only 23 years earlier, Scotland was widely considered to be apart from the rest of Great Britain. Pennant’s Tour in Scotland 1769 (Chester, 1771 and London, 1772) described the course of his journey from Edinburgh to the Highlands and then back. His candid writing, which ranged from topographic descriptions, botanic and geologic observations to snippets of history and commentary on local customs, was an unexpected success with the (English) reading public.

Such was the popularity of his first Tour, that one year later Pennant undertook a second journey to Scotland, published as A Tour in Scotland, and Voyage to the Hebrides 1772 (1774). This second Tour focussed on his travels in the remote Hebrides, and again Pennant captured the landscape, culture, and customs in his writing.

Ruins of the ancient monastery on the Island of Oronsay 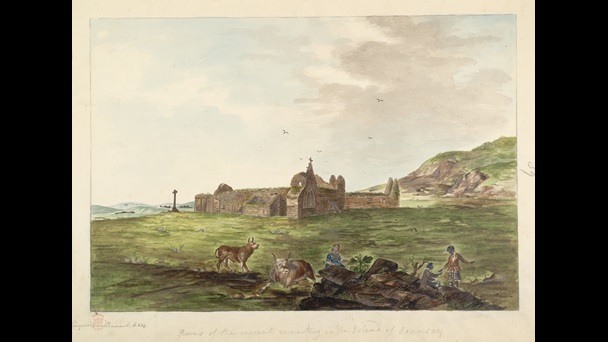 This watercolour of the ruined monastery on Oronsay was used as the basis for an illustration to A Tour in Scotland, and Voyage to the Hebrides 1772

Pennant’s topographical writings on the Scottish land and landscape helped to contribute the developing concept of ‘Britain’ as a single nation.[5] Following the success of his two Scottish Tours, Pennant completed two Tours of his native Wales published as A Tour in Wales (1778 & 1781) and The Journey to Snowdon (1781). Pennant’s Welsh Tours also served to identify Welsh history with a wider British identity:

I now speak of my native country, celebrated in our earliest history for its valour and tenacity of its liberty; for the stand it made against the Romans [...] The hardy Saxons, for above three centuries, could not make an impression even on our lowlands. [...] With obdurate valour we sustained our independency for another four centuries, against the power of a kingdom more than twelve times larger than itself: and at length had the glory of falling, when a divided country, beneath the arms of the most wise, and most warlike of the English monarchs.[6]

Pennant’s pride in historic Welsh independence from England is apparent from his celebration of Roman and medieval conflict; however Pennant uses his text to consolidate Welsh culture and landscape as an integral part of the identity of Great Britain. Following the publication of his Welsh Tours, Pennant also published his writings on a portion of his English Tours documenting his journey from Chester to London, and his hugely popular Of London, which first appeared in 1790.[7]

A Tour in Wales 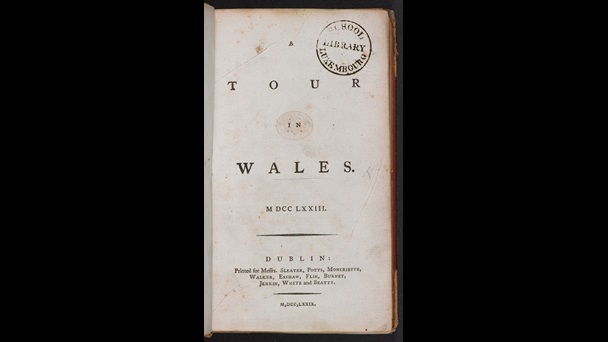 A Tour in Wales simultaneously celebrated Welsh identity and culture while bringing Welsh landscape, history, and customs into a wider British perspective

Pennant’s Tours were not wholly individual enterprises, as is evident from his acknowledgements naming numerous persons, including ‘The revered Mr. EDWARDS, rector of Llanvechan, [who] favoured me with some excellent accounts of the parishes of Oswestry, Sellatyn, and Hope’ and ‘To OWEN BRERETON Esq; I owe the loan of the curious antiquities found in his estate near Flint, which are engraven in the plates[…]’.[8] Pennant relied heavily on a network of antiquities, local historians, and naturalists to provide him with local knowledge with which to illustrate and expand his Tours.

Pennant was a lifelong traveller, and when later in life he was physically unable to undertake further Tours, he continued to journey the length of Britain and beyond from the comfort of his home. This is most clearly embodied in Pennant’s writings on Patagonia, China, Indonesia, Australia, and ‘Hindoostan’ (the Indian subcontinent); none of which Pennant ever saw and which were pieced together from other written sources.[9] Pennant was a prolific writer, and publication of his many Tours continued posthumously in the 19th century.

During his Tours Pennant did not travel alone. In the interests of scientific study and observational record, the self-taught artist Moses Griffiths accompanied him on the Scottish Tours. During these journeys Griffiths recorded specimens of birds for Pennant’s ornithological publications, alongside views of the landscapes they encountered, which appeared in the first and subsequent editions of Pennant’s Tours. Pennant’s Tours were also illustrated with prints after contemporary topographical works, such as a series of drawings by the brothers John Frederick and James Miller created during Sir Joseph Banks journey through the Hebrides in 1772.

Back front of the Weaver's House near Bowmore, on the Island of Islay 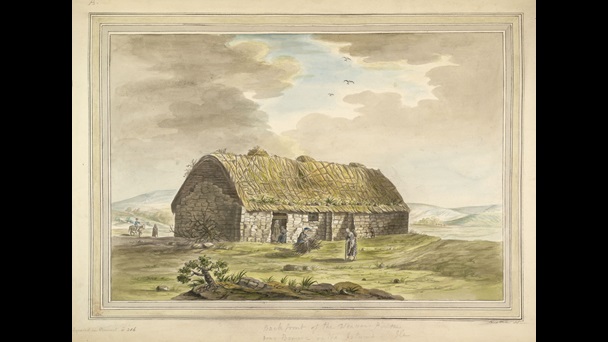 James Millar’s watercolour view of a weaver’s house was used as the basis for an illustration to Pennant’s A Tour in Scotland, and Voyage to the Hebrides 1772

As the popularity of Pennant’s writings grew, so did the taste for topographical prints and drawings. Pennant’s Tours became perfect vehicles for the 18th century practice of extra-illustration: a process by which print collectors would acquire maps, prints, and drawings to bind with the associated printed text. This practice, known as grangerising or extra-illustrating, had first been popularised by the Rev. James Granger and his Biographical History of England, which provided short biographies of historic figures and was designed to be bound with numerous printed portraits. The extra-illustration of Pennant’s Tours was widespread, with choice collectors such as the prolific extra-illustrator Richard Bull, filling his pages with drawings by artists such as Griffith and Paul Sandby alongside commercially available prints.[10]

Ramnock in the High Lands of Scotland 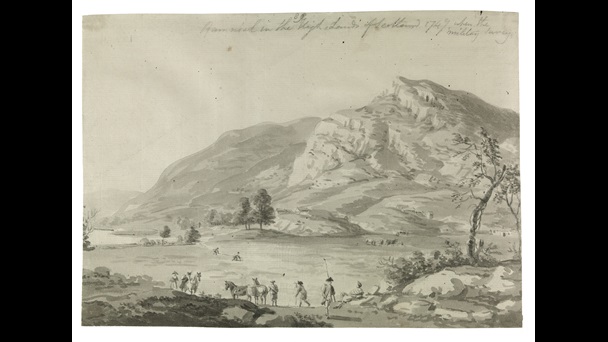 In order to meet the demand for topographical prints with which to illustrate Pennant’s works, publishers produced series of views designed specifically with the Tours in mind. Other writers soon capitalised on the popularity of Pennant’s writings, and in the closing decades of the 18th century and the early 1800s numerous topographical texts designed for extra-illustration appeared including Daniel Lyson’s Environs of London (1792–96) and John Thomas Smith’s publications The Antiquities of London and its Environs (1791–1800) and The Ancient Topography of London (1810–1815).[11]

Pennant’s Tours helped to foster a renewed interest in British topographical writings and illustrations which endured into the 19th century. Practices of first-hand observation and record making encouraged antiquaries and aesthetics alike to undertake their own British Tours, and helped to transform topography into a distinctly national art form.

[10] Lucy Peltz, Facing the Text (San Marino: The Huntington Library, Art Collections, and Botanical Gardens, 2017), and for a specific discussion of the influence of Pennant’s work on contemporary print collecting see pp.222–67.