Topographical drawings at the British Library

Historically the division of drawings of topographical and architectural subjects between the department of Manuscripts and the department of Prints and Drawings at the British Museum has never been altogether clear-cut. Broadly speaking, where the interest is not primarily artistic such drawings have been considered more appropriately retained with the associated written material. In practice the spheres of the two departments have always overlapped. Transfers in both directions have taken place from time to time, but it is still not difficult to find exceptions to any general rule. While it is true that you may look to the Manuscript collections in vain for the masterpieces of British art, this does not preclude the more modest pleasures of discovering unfamiliar works by such artists as Thomas Rowlandson, Edward Dayes, William Mulready and Paul Sandby. 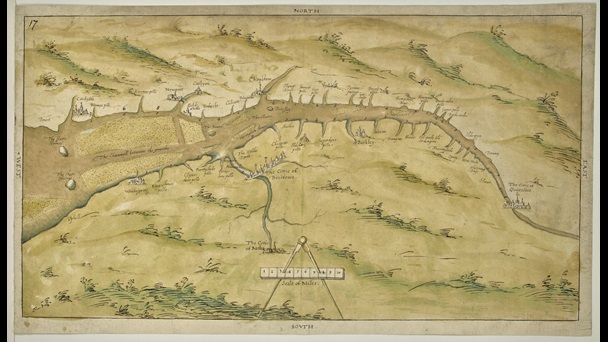 This Tudor map is from the collection of Sir Robert Cotton, one of the foundation collections of the British Museum.

The main strengths of the Library’s collections lie in two areas. For the early history of topographical landscape in this country the great series of Tudor maps, plans and views formed by Sir Robert Cotton (died 1631) whose manuscripts became one of the foundation collections of the British Museum, is of enormous importance. Secondly, there is a wealth of material for the period 1760 to 1860, reflecting the great age of English watercolour painting and topographical or landscape drawing. This includes a number of large collections of the work of particular artists. Most notable among these for quality of workmanship, geographical spread and sheer quantity are over 3,000 drawings of the social scene of late 18th-century England by Swiss-born Samuel Hieronymus Grimm; some 700 drawings by the antiquarian and architect John Carter for his Ancient Architecture in England; 45 volumes of monochrome drawings with an emphasis on architecture by Edward Blore; and more than 12,000 drawings by John Buckler, his son John Chessell and his grandson Charles Alban spanning virtually the whole of the 19th century. 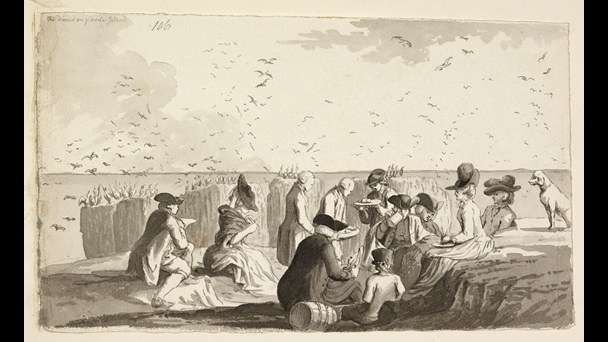 This typically characterful view is one of many by Samuel Hieronymus Grimm in the collections of the British Library. 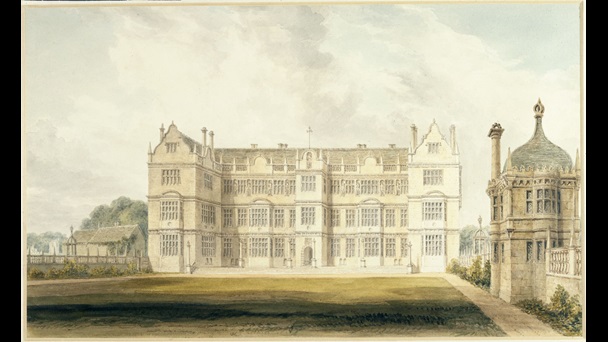 Buckler's view of Montacute is typically precise and informative.

Of incidental source material there is a great variety: travel journals and sketchbooks, illustrated reports from voyages of discovery and sight-seeing excursions, notes, letters and papers, personal albums and official commissions. A great deal of material is to be found in historical collections made for proposed county histories or in extra-illustrated copies of such works.

The practice of extra-illustrating or ‘grangerising’ was established in 1769 when the print collector James Granger published A Biographical History of England with blank leaves for additional portraits or other pictures. Filling up a ‘Granger’ became a popular hobby and other suitable texts were soon brought into use. County histories in particular lent themselves to this treatment.

The 19th-century vogue for compiling these vast works and the tireless industry of the ‘noble band of Grangerites’ has left a wonderful quarry. One of the fullest examples in the Manuscripts collection is contained in 28 volumes of illustrations collected by a London merchant, J. W. Jones, to enrich histories of Hertfordshire and Kent. In 1881 the British Museum Trustees sanctioned a payment of nearly £1,000, a sizeable sum at that time, to procure these collections: Clutterbuck’s History and Antiquities of Hertford  ‘tastefully illustrated’ with 1,040 additional engravings and 467 drawings, and Hasted’s Kent, ‘3,710 drawings by eminent artists and nearly 5,000 engravings’. This watercolour by John Hassell comes from a grangerised book at the British Library.

For the years after about 1860 the material in the Library becomes a good deal scarcer. Topographical drawing is a functional art. Its main purpose is to record accurately; but the invention and development of the camera brought into common use an instrument that was able to record the features of a place with more speed, accuracy and reliability than a pencil and paintbrush.

Thomas Love Peacock found space in The Misfortunes of Elphin (1829) to lament the ill-usage of the abbot’s kitchen at Glastonbury:

‘These ruins were overgrown with the finest ivy in England, till it was, not long since, pulled down by some Vandal, whom the Society of Antiquaries had sent down to make drawings of the walls, which he executed literally, by stripping them bare, that he might draw the wall, and nothing else.’

Making exact records of places might on occasion vie with aesthetic discernment. An emphasis on straightforward and sometimes finicky copying, and the non-exclusive participation of an assortment of soldier-artists, local historians, travellers, clergymen, heralds and eager amateurs has consigned topographical drawing to the rank of a humble art. But many men of taste and talent have been lured into topographical art. The drawings in great measure have charm, and nearly always immediacy. Some have more than charm. And even where achievement in terms of artistic merit is slight, the value of the legacy to the student of the past is unquestionable and increasingly widely recognised.