Topography and the historic shelving schemes at the British Library

Throughout the last 400 years librarians and curators have taken different approaches to classify topographical collections. Adrian Edwards, Head of Printed Heritage Collections at the British Library, explores the historic shelving schemes and traces the development of their organisation.

From the perspective of a librarian, topography is a broad and varied subject. Long experience of working with the antiquarian book collections at the British Library leaves one with the distinct impression that over time various different approaches have been taken towards topographical books, particularly illustrated ones. It is certainly true that topographical materials can be found dispersed across a number of different parts of the collection that was inherited from the British Museum in 1973. Sometimes they are interfiled with major histories, but elsewhere they sit alongside art books illustrated with early photographs. So what did 18th, 19th and 20th-century librarians working with this collection understand by topography? One way to explore this is to see how the term topography featured in past classification schemes used for organising and indexing books on the shelves. Elements of these historical schemes have become fossilised in the shelfmarks still in use today. Librarians can therefore visit the various shelfmark sequences reserved for topography, see what was placed there, and glean something of how our predecessors interpreted this subject across the centuries.

Montagu House and the Old Library

For much of its history, the British Museum Department of Printed Books aimed to organise its general collection according to its own broad subject-based shelving schemes. That said, other factors have also been taken into consideration, particularly volume size, rarity and expected level of reading room use. The activity of arranging books by subject began in the 1750s when most of the books in the original Montagu House building were divided into 10 broad class sequences. This arrangement lasted until 1838, at which point the entire collection was re-organised as the library expanded into the Museum’s new North Wing. For this move, a new classification scheme was devised by Thomas Watts (1811–1869). It began at book press number 463 (Bibles) and worked upwards to book press 1469 (English poetry), although further presses were soon added. This part of the collection is known as the ‘Old Library’, and the books generally retain their original shelfmarks even today.[1] In his Topical Index (1987),[2]  Robin Alston transcribes a manuscript shelving list (now lost) which was used by staff in the 1840s to place volumes in their new locations. From this, we learn that topographical books were split across several sequences: ‘Topography’, ‘Topography – Travels’, and  ‘Geography & Topography’. It is not clear what criteria were used to differentiate between the various categories, but the three separate sequences for ‘Topography – Travels’ may in some way reflect volume size.

As most of the Old Library is still shelved according to these historical pressmark sequences, staff can often visit the book stacks to see which items had been sent to each of these shelving sequences in the 1840s and 1850s. In each of the three topographical subject areas, the main content appears to be British and European histories, geographies and travelogues. Titles range from A Description of Holland (1743) and Agostino Falconi’s Sea-Turn about the Gulf of Spezia (1846), to Johann H. Schnitzler’s Essai d’une Statistique générale de l’Empire de Russie (1829). Only a few of the volumes sampled contain illustrations. These include Edward W. Brayley, The Beauties of the Isle of Thanet ... with 106 engravings (London: W. Marshall, 1830), British Library 579.c.56. Shelved in the range for ‘Topography – England’, and William Jeffs, Recollections of Italy: 15 select views drawn from nature by William Jeffs in the years 1826 and 1827 (London: Ackermann & Co., 1829), British Library 789.g.7. Shelved in the range for ‘Topography – Travels.

Castel Gandolfo with Part of the Alban Lake 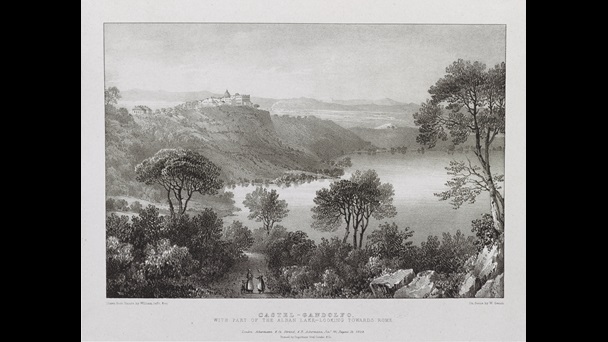 This lithograph was published as part of Recollections of Italy, a series of fifteen 'select views drawn from nature by William Jeffs in the years 1826 and 1827'.

The explanation for the scarcity of illustrated works appears to relate to volume size: 18th and 19th century books containing plates are often large and were sent to oversize sequences in order to make efficient use of the available shelving. There are no oversized presses listed in the manuscript transcribed by Alston. They do, however, appear in the main section of his Topical Index, where Alston records that oversize topographical books were sent to presses 1786–1790 and 1853–1855.[3]  Visiting the stacks where these books are now stored, it is again evident that most of the volumes contain only text. Among the few exceptions is W.A. van Rees, Nederlandsch-Indië (Leiden: A.W. Sijthoff, 1881–83), British Library 1787.d.5.

But a check of material nearby shows that some topographical works went instead to shelves reserved for  ‘Illustrated Works, Extra Size’, for example Richard Phené Spiers, Egypt: a Series of Thirty-Six Views of Ancient and Modern Egypt  (London: B.T. Batsford, 1887), British Library 1878.d.8. 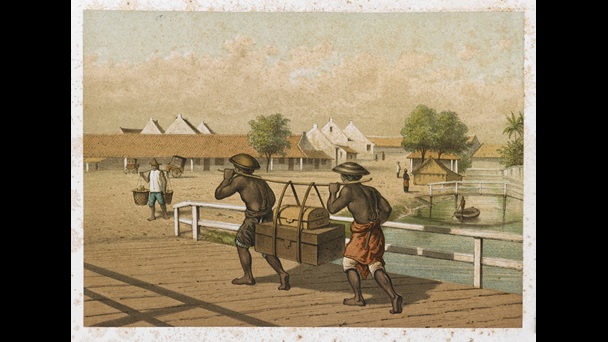 This coloured lithograph shows two labourers carrying trunks across a bridge in Batavia, capital of the Dutch East Indies.

By the mid-19th century, rapid growth of the collection and the construction of book stacks around the new Round Reading Room meant that Watts had to devise a new subject arrangement to cover thousands of additional presses, subsequently known as the ‘New Library’. Once again Alston transcribes a now-lost manuscript handlist used by the placing team, this one dated 1877.[4] In this new subject scheme, there is a single sequence for ‘Topography’, sub-divided according to a logical and comprehensive geographical arrangement; the categories of ‘Topography – Travels’ and ‘Geography & Topography’ are no longer present.

Again, most books acquired from around 1860 to the early 1970s have retained these shelfmarks in the British Library today. A survey of the relevant shelves finds a mix of mainly British, continental European and American works. Hardly any contain illustrative plates, although guidebooks generally contain at least one map.  A preliminary assessment would be that later nineteenth- and early twentieth-century librarians defined topography as travel guides, local histories and city handbooks. Volumes that contained primarily collections of views – by now increasingly photographic rather than engraved – appear to have been systematically sent instead to shelfmark sequences created for illustrated books irrespective of subject.[5]

The King’s Library and its Classed Catalogue

In Thomas Watts’s Old Library classification scheme in 1834, the numeration began at press number 305. This was because presses 1 to 304 were those in the King’s Library Gallery reserved for the printed book collection of King George III. The shelving arrangement of the King’s Library may once have followed a similar system to that of Old Library, although subsequent transfers, re-arrangements and its wholesale move to the King’s Library Tower at British Library mean that this is no longer particularly apparent. There is, however, an extra level of insight that we have for the historical understanding of the subjects matter covered by this collection in the shape of its Classed Catalogue (1827?).[6] This comprises 12 volumes of manuscript bibliographical entries arranged by subject (classes), compiled by Sir Frederick Barnard (1743–1830), George III’s librarian who transferred to the British Museum along with the books.

In the Classed Catalogue, ‘Topography’ appears only as a facet within Class 2: History, and is not a heading in its own right. Barnard did not take a systematic approach to subject division, but instead seems to have shaped his arrangement around the material in the collection. For example: 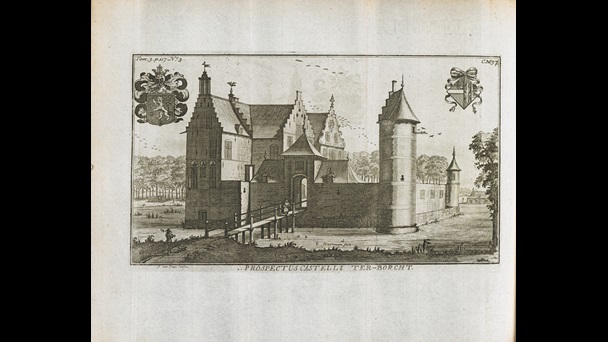 The Duchy of Brabant was an ancient territory within the Holy Roman Empire, which today encompasses West Flanders in Belgium.

It is interesting that the illustrated volumes identified in this way do not contain the King’s Topographical (‘K Top’) geo-reference numbers found in most other maps and views owned by George III. Nor are these copies listed in the 1829 catalogue of King’s geographical and topographical collection.[7]

The Hidden Hand of the Librarian at Work?

This brief look at the subject arrangement of the British Library’s Old and New Libraries raises some interesting points with respect to topography. Within just one institution, subject-based shelving schemes over time have addressed topographical books in more than one way. For example, Watts aimed in the Old Library to distinguish topographical travel from topography by country, but he abandoned this idea in the New Library. In the early years when many of these books would have been shelved around the walls of the Museum’s public rooms, decisions about the placing of individual books could have directly affected their visibility among researchers: a reader who has successfully found a shelf of material classified as ‘Topography ­– France’ might not appreciate that they also need to look for books classed as ‘Geography & Topography – France’. The choice of how to categorise each book rested with the placing staff; send a volume to a less obvious book press, and there is a risk that it will stay on the shelf, unseen, for decades to come.

The existence of Barnard’s Classed Catalogue, seemingly compiled in the years before the books were moved to the new King’s Library Gallery at the British Museum,[8] perhaps suggests that some librarians were already aware of the shortcomings of relying solely on shelving schemes to provide subject access to their collections. Nevertheless, the British Museum itself did not start to publish general subject indexes until 1902,[9] so there continued to be a reliance on the subject  arrangement of books at shelf; this despite the fact that the majority of the collection had long since been moved to book stacks with no public access.

Initiatives such as this ‘Picturing Places’ resource, the King’s Topographical Digitisation Project, and the general upgrade of historic catalogue records to include subject and format information, will all help to raise the profile of topographical items at the British Library. In the meantime, it is perhaps inevitable that some items will be missed by researchers as a result of decisions made by generations of librarians, either because of the subject-based shelving schemes or the placing of individual books within them.

[1] Historical press numbers have become fossilised as the first element in older shelfmarks. For example, volume 1 of Paul François Velly, Histoire générale de France (1808–10), now at shelfmark 900.a.1 was once on press number 900, which was reserved for books about French and Polish history. For more about the shelving and classification schemes used for printed books in the British Museum, see F.J. Hill, ‘The Shelving and Classification of Printed Books’, in P.R. Harris (ed.), The Library of the British Museum (London: British Library, 1991), pp. 1–74.