Views of the Middle Colonies

Brett Culbert discusses Thomas Pownall’s observations of the changing landscapes of the New World from his visit from 1753–60.

In 1753, the future Governor of the Massachusetts Bay Colony, Thomas Pownall, travelled from London to the Province of New York to fulfill his Royal appointment as Secretary to Governor Danvers Osborne. Within a week of the statesman’s arrival the Governor died unexpectedly. Secretary Pownall – having taken a keen interest in British-American affairs – chose to remain in the Colonies to update Lewis Evans’ Map of Pensilvania, New-Jersey, New York and the three Delaware counties (1749), the most widely circulated map at the time. Pownall set out to survey the greater Hudson River valley and along the way he observed the emergence of a specifically American identity concentrated within the wilderness, settlers, and nascent industries of the New World. Subsequently, Pownall’s topographical surveys of the provincial hinterlands and refinements to Evans’ work were incorporated into a new Map of the Middle British Colonies (1755): a critical tool for the British on the frontlines of the French-Indian War and the legal survey for future land transactions in the Colonies.[1]

A general map of the middle British colonies in America 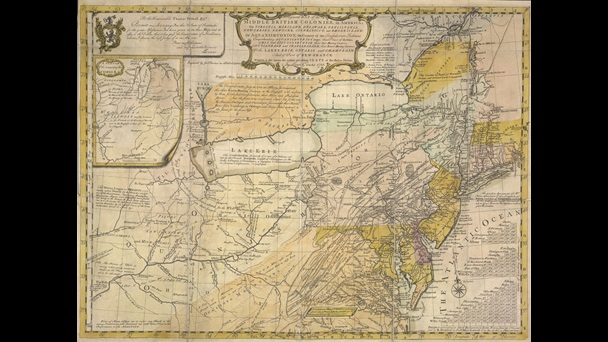 In retrospect, the urgency of his self-guided travel and later Pownall’s attendance at the Albany Conference in 1754 – the first major gathering to discuss inter-Colonial co-operation in wartime – reveal his strategic preparation for Britain’s military effort in the foreseeable conflict with France.[2] At the time, England’s pending expansion into the Indian-controlled Ohio Territory was critical to the future viability of the Atlantic Colonies, as they had not significantly settled beyond 100 miles inland in at least as many years.[3] The advancement of the frontier would thus grant access to resources that were critical for what were by now densely populated towns along the seacoast as well as the growing coffers of the British Empire. As Pownall reveals by visually documenting particular topographical features along the colonial frontier, gaining control over the upper reaches of major river arteries, beyond fall lines, would allow for the communication of settlers and military servicemen deeper into the forests: the realm of contested French and Indian land claims and resources.

Along his travels to the frontier, Pownall encountered settlement and industrial operations born within the wilderness among a battery of natural effects previously unknown to Europeans. As he verified Evans’ map and made his way from New York to Albany, Pownall recorded these adaptations as literary observations that comprised a travel narrative in his Topographical Description… (published 1776): a genre that was popularised by the British gentry who were intellectually sustained by envisioning foreign cultures to complicate their worldview.[4]  Pownall’s knack for reflecting through word and image on early industry and dramatic landscape features is first revealed at his stop at the Passaic Falls in the forests of New Jersey. As the Secretary made his way to a prospect above the mighty cataract, he observed the first operating English steam engine in the New World at the Schuyler Copper Mine in present day Arlington.[5]

Pownall’s reference to what he called a ‘fire engine’ at New Jersey’s most notable industrial operation at the time is interesting given the context of the nearby Falls, as they were construed as an overwhelming – indeed sublime – source of both visual and impending industrial power. As Pownall climbed to the precipice to take a view of the valley and industrial operations below, he described the scene in the following passage:

'The River running round the Back of a Rocky Cliff, which by some Accident has been shattered & riven from Top to Bottom about 90 feet, turns short round & Tumbles head long with an Inconceivable force & Velocity down this horrid chasm foaming with its hoarse stunning roar at its base more like something combustible than Water.'[6]

A view of the falls on the Passaick 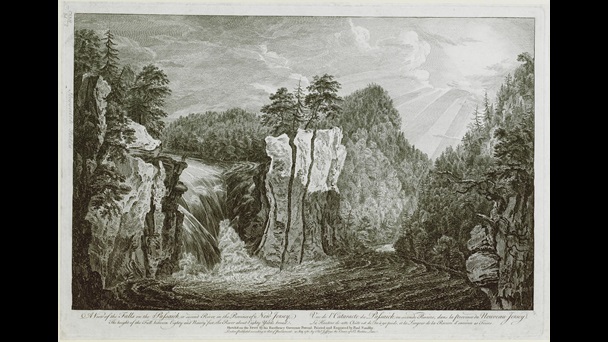 One of eight serialised views of the New World published in the folio: Eight views in North America and the West Indies.

Pownall sketched a view of the Falls ‘made upon the Spott’ which was later painted and engraved by the English landscape artist Paul Sandby, titled: A View of the Falls on the Passaic (1761).[7] Sandby, a founding landscape painter at the Royal Academy of Art, had expertise in topographical representation from serving on the Ordnance Survey Board in Scotland; he would later become the Chief Drawing Master of the Royal Military Academy at Woolwich, charged with training engineers to document the expanding landscape of the British Empire.[8] Sandby’s translations of Pownall’s visual impressions were ‘given to the Publick’ whose tastes for landscape observations and printed views, especially in the picturesque style, were emerging in England at the time.[9] The view of the Passaic Falls was one of eight serialised views of the New World published in the collectible folio: Eight views in North America and the West Indies (London, Thos Jefferys, 20 May, 1761).

As Pownall believed that all of society was connected through the natural world, he surmised that the native qualities of a 'race' grew out of available resources and surrounding nature. This conceptualisation of cultural origins was used by Pownall to describe the governance and order of political society as a phenomenon that could naturalise foreigners within their new surroundings. As Pownall’s tour drew near to the Moravian settlement in Bethlehem, Pennsylvania, the subject of his second printed view was revealed through a picturesque frame of trees at a clearing made by the natural character of the topography. Here Pownall sketched a scene that would later be translated and engraved by Sandby, titled: A View of Bethlehem the Great Moravian Settlement in the Province of Pennsylvania (1761).[10]

A view of Bethlem 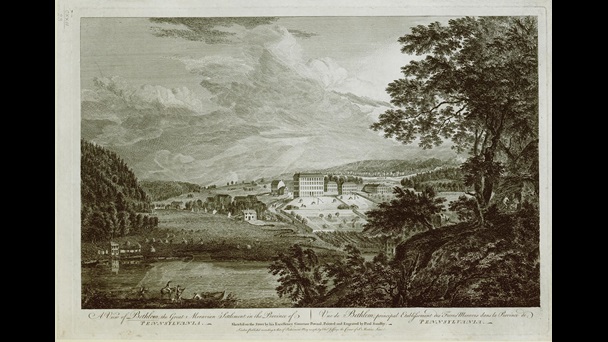 Pownall’s aesthetic appreciation of the American scenery is evident from this etching.

In the published account of Pownall’s travels that accompanies this view, A Topographical Description…, the statesman recounts the visual and intellectual pleasure he experienced at the scene of Bethlehem:

‘My eye was struck with unexpected pleasure. The Place itself makes a delightful landskip but found, & thus seen in the center of a wilderness, derives unusual beauty from the contrast & surprise with which it presents itself.’[11]

The Moravian’s model community in Bethlehem was planted on a 500 acre parcel that was claimed from the Indians by Penn during the Colony’s walking purchase in 1737.[12] As the settlement was envisioned to be the North American beacon for the Moravian’s global trade empire, it became a prime composition of industry and society upon which Europeans were apt to reflect along their travels. What’s more, the stylised qualities of Sandby’s composition reveal the state of English landscape art by the mid-eighteenth century, especially the emergence of a national style based on Continental precedents that were widely translated to print and circulated in Britain at the time. Topographical observations like Pownall’s were prime underlays for landscape artists like Sandby to explore the potential for visual effects capable of augmenting one’s view.

Perhaps the most experimental and provocative of Sandby and Pownall’s Eight Views… is one that is not described in Pownall’s travel narrative: A Design to represent the beginning and completion of an American Settlement or Farm (1761). As the title suggests, the composition is most novel in that it was designed to represent various moments of time in a static topographic view. This temporal collapse into a single image results in a scene that expresses the accelerated pace of development in the New World. The landscape depicted contains various stages of growth and the ongoing transformation of wilderness into a familiar pastoral setting that enabled foreign settlers to imagine themselves in a New World that resembled home. 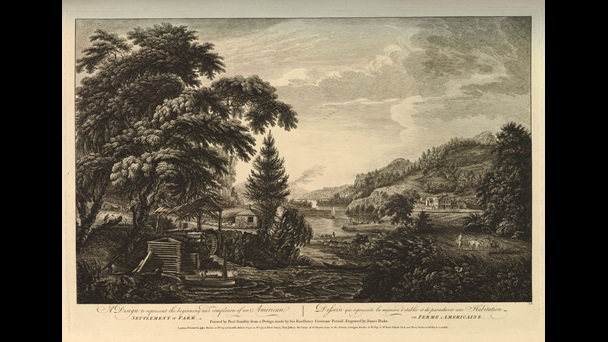 The changing face of the New World.

In the composition, Pownall and Sandby draw on themes from views like the Passaic Falls that celebrate the cultivation and industrial productions of the New World. The subject of this view, the water-powered sawmill in the foreground, appears to provide an abundance of timber for myriad productions downstream including: a log cabin, a Georgian farmstead, fences, boats, and a utility wagon, as well as the very sawmill that makes the scene possible – preparing material for the unsettled frontier beyond. In the distance, there is a collection of Indian teepees gathered on an island in the river; a settlement that is downstream from the civilising industrial and agricultural operations in the foreground. The collected Indians within the river valley thus appear as a target for the advancing British frontier as it moves deeper into the imagined landscape of Sandby’s print. These isolated moments within the view are contained within a greater seemingly natural or wild setting: a visual effect that makes it seem as if the wilderness of the New World ultimately remained dominant and resilient to the control of compositional aesthetics and the cultivation of human labour and artifice.

When taken together, the writing from Pownall’s tenure in the Colonies and Sandby’s co-authored prints reveal formative topographical features and the industrious spirit that forged an identity for individuals who were naturalised in the context of the American wilderness. Prior to the American Revolution, while the Provinces were under the control of England, Pownall’s work also satisfied a European desire to visualise this previously unknown setting as an intellectual curiosity. The natural environment of the New World was a model subject for the implementation of aesthetic landscape principals that were emerging in England at the time of Pownall’s travels. Such principles perhaps shaped Pownall and Sandby’s reflections and led them to embellish topographical depictions with an Anglo vision for ordered industrial, spiritual, and scenic composition – an approach that made the views more comprehensible to an English audience comfortable with certain landscape aesthetics and excited to see views of England’s territories abroad. This practice would come to be replicated by subsequent travelers who followed a similar tour to Pownall’s and further attempted to draw British North America into existence by way of a distinctly European lens.

[1] Lewis Evans, Geographical, Historical, Political… Essays. The First Containing an Analysis of a General Map of The Middle British Colonies in America (Philadelphia and London: B. Franklin and D.

[2] Pownall recognised the importance of visualising the British boundaries as well as significant topographical features, especially navigable river arteries, that could render a strategic British military deployment within the landscape.

[4] On the popularity of travel literature in this period, see: Charles L. Batten Jr., Pleasurable Instruction: Form and Convention in Eighteenth-Century Travel Literature (London: University of California Press, 1978), 101–107; the British Library has a later edition of Pownall’s travel narrative, see: Thomas Pownall, A Topographical Description of Such Parts of North America as are contained in the (annexed) Map of the Middle British Colonies in North America (London: J. Almon, 1776) British Library, London, Cartographic Items Maps C.24.g.5.

[11] Thomas Pownall, A Topographical Description of the Dominions of the United States of America (Pittsburgh, PA: University of Pittsburgh Press, 1949), 102.