Wenceslaus Hollar as a map-maker

Former Head of Map Collections at the British Library Peter Barber explores Wenceslaus Hollar’s interest in and experience of creating maps to picture place and convey his political opinions.

The artist and etcher Wenceslaus (Wenzel in German; Václav in Czech, Wenceslas in English – but he spelt it ‘Wenceslaus’) Hollar was born in Prague on 23 July 1607 to an ennobled, Protestant Czech lawyer and his German wife. He told the antiquary and gossip John Aubrey that ‘when he was a Schoole-boy he tooke a delight in draweing of Mapps; which draughts he kept, and they were pretty’. Although best known for his views, fashion plates and etchings of fur, throughout his career he supplemented his income by etching maps and panel decorations for maps. His personal interest finds expression in some of his non-cartographic works: for instance he produced a striking image of the globe when creating his unorthodox depiction of Aesop’s fable of the eagle and the tortoise in 1668 for John Ogilby’s edition of the Fables.

During the earliest stages of Hollar’s career in the late 1620s and early 1630s, when part of the workshop of Mattheus Merian in Frankfurt following his departure from Prague in 1627, he created numerous urban plans and bird’s-eye views. He created only one town plan between 1636, when he was brought to London from Cologne by Thomas Howard, Earl of Arundel, and 1642 probably because Arundel wanted him to concentrate on making etchings of his large collection of paintings and antiquities. 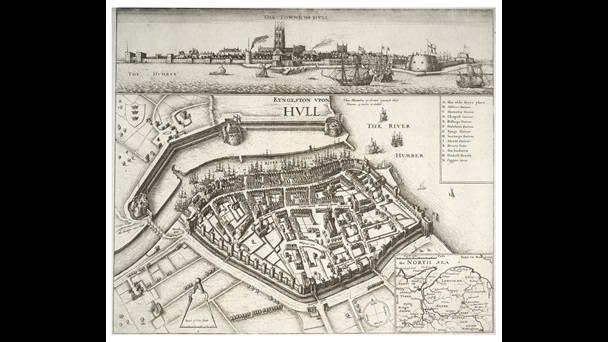 A comparison between the Bohemian and English Civil Wars 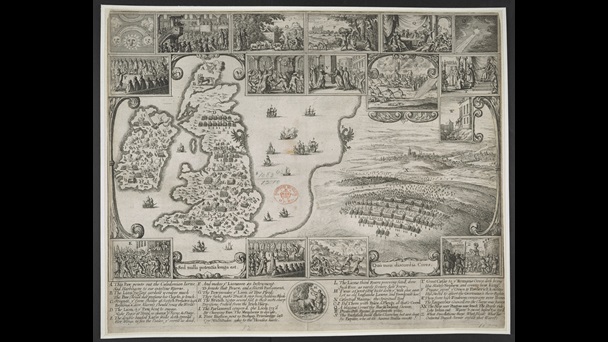 There followed a period of personal anguish for Hollar. The outbreak of the English Civil War in 1642 seemed destined to involve him once again in the bloodshed and chaos of war which he thought he had escaped by coming to England: he recalled to Aubrey that ‘when he first came into England (which was a Serene time of Peace) that the people, both poore and rich, did look cheerfully’. His personal anguish found expression in the map of 1642–43 comparing the outbreaks of the English Civil War and the Bohemian civil war, which had sparked the Thirty Years War after 1618. In the same years, Arundel’s increasing financial difficulties and ultimate departure from England for Italy forced Hollar to earn his living though commercial commissions, which included maps.

Despite his own royalist sympathies in 1643-44 he accepted a commission from the puritan publisher Thomas Jenner to copy Christopher Saxton’s large wall map of England and Wales, dating from 1583 but still the most accurate map of the kingdom. An extremely utilitarian object, virtually lacking in decoration, Hollar’s copy was advertised as ‘Useful for all Com[m]anders for Quarteringe of Souldiers & all sorts of Persons would be informed, Where the Armies be’ and it became known as the ‘Quartermaster’s Map’. 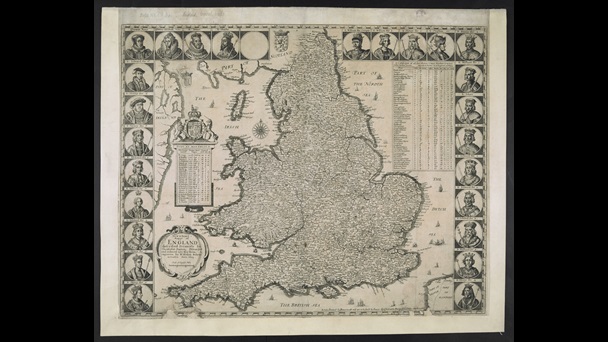 Some examples were issued in strips and backed with leather for use as pocket maps, or, once rolled, for placing in saddles for the convenience of its users – an idea which was to be illustrated at the end of Hollar’s career in the frontispiece that he created for John Ogilby’s Britannia Volume the First (1675), the first ever printed atlas of road maps in strip form.

In the course of 1644, and because of his royalist sympathies and abhorrence of war, Hollar left London for Antwerp where the Countess of Arundel was then living and where he remained until 1652. During this period he etched several bird’s-eye views of towns such as Rostock, though he mainly produced views, fashion plates and portraits.

After his return to London in 1652, Hollar became increasingly preoccupied with the creation of a 5 feet by 10 feet (150 x 330 cm), 24 sheet, bird’s-eye style wall map depicting every important building in London which he seems to have intended to survey himself.

Propositions concerning the map of London and Westminster &c. 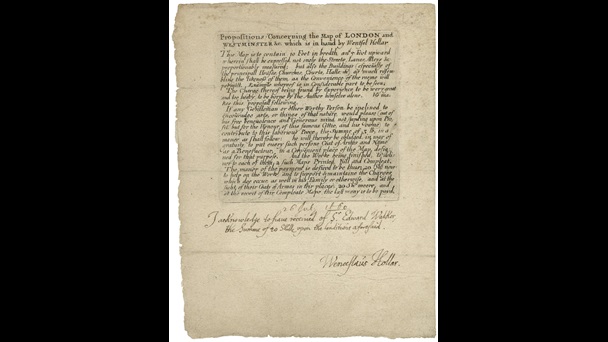 He would have known that the last detailed map of London had been created a century earlier and was almost totally obsolete, new suburbs having come into existence as the population quadrupled in the intervening years. He may have been toying with the idea of such a map from shortly after his arrival in London: the back of one of the preliminary drawings for his great panorama of London dating from the late 1630s, now in the Yale Center for British Art at Newhaven, once had a sketch plan of some London streets around Thames Street.

Although only one trial sheet of the proposed map, showing the streets around Covent Garden, now survives, he seems to have made good progress. Even the Great Fire of 1666 which destroyed most of the City did not lead him to give up hope of finishing the map – if only as a memorial to the city that had perished. However, he was unable to find sponsors. This was probably not because of any decline in his popularity (he was kept busy with all sorts of commissions throughout his life and received the honorific title of ‘Scenographer’ from the King in 1666) or in his skills but because of a change in genteel taste. The measured, ‘scientific’ ground plan became popular at the expense of the more ‘artistic’ bird’s-eye view which was Hollar’s speciality. He created his last, miniature, bird’s-eye view style map of London in 1675 but it seems not to have sold well.

A New Map of the Citties of London, Westminster & ye Borough of Southwarke 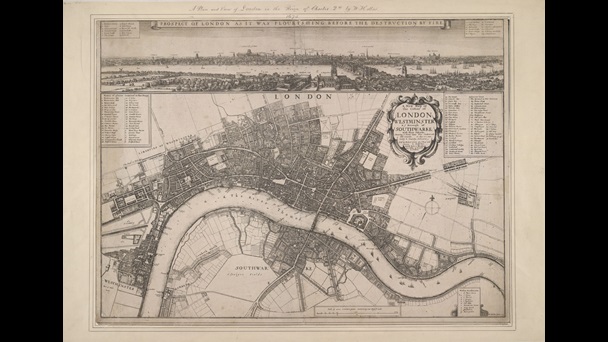 The face of London in 1675, nine years after the Great Fire

One of his last jobs was to etch the lettering, compass rose and ships on the Thames for the first, highly detailed and scientifically measured ground plan of the City of London supervised by John Ogilby and published by William Morgan in the autumn and winter of 1676–77.

Meanwhile, the need to earn enough money to live as befitted an aristocrat led Hollar to etch numerous local maps and architectural plans to illustrate antiquarian and topographical works by patrons such as William Dugdale and Elias Ashmole and to etch numerous maps of the counties of England and the countries of the world for the publishers who were among the founding fathers of the English map trade. These included Peter Stent, the latter’s successor John Overton, John Ogilby, Richard Blome, whose Geographical Description of the Four Parts of the World (1670) was the first new folio world atlas to be compiled, engraved, printed and published in England, (though the maps were derived from French originals) and John Seller, a prolific publisher of small atlases of maps and charts.

Quite often Hollar simply supplied etched views for maps engraved by others. Thus he etched a view of Dover Castle and van Dyck’s view of Rye to illustrate a late edition of Philip Symonson’s detailed map of Kent, originally of 1596. These maps and views were executed to order, were mechanistic and usually show little originality. Where he had a personal interest, however, the results were far finer as can be seen in the map of the Straits of Messina, which he etched within a year of his death on 25 March 1677.

A Mapp Containing the Island & Kingdome of Sicily 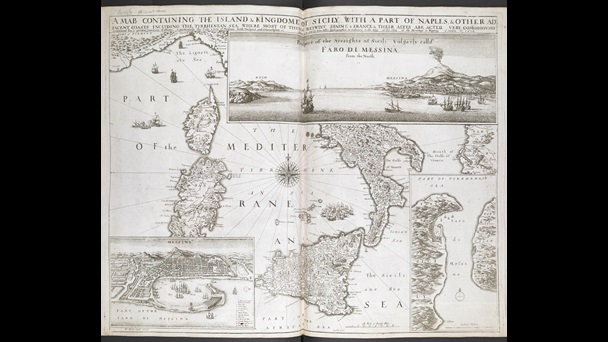