A set of views in the King's Topographical Collection shows blossoming settlements in the Australian territory of New South Wales. Published in Sydney by Absalom West, the set provided George III with a glimpse into colonial life thousands of miles away. Oliver Flory explores further.

The first locally published topographic printmaking venture in Australia was Absalom West’s Views of New South Wales. The set consists of 24 plates, published at various intervals between November 1812 and September 1814 and accurately depicts the growing towns of Sydney, Windsor, Newcastle and Parramatta, as well as the landscapes surrounding the settlements.

View of part of Sydney, taken from Bennelong Point 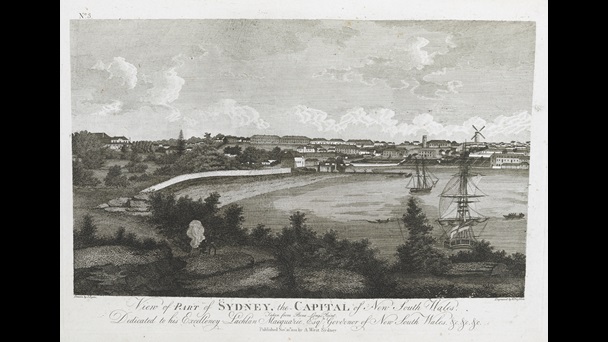 The views are presumably designed to support the desire of the enlightened Governor, Lachlan Macquarie, to depict Sydney and its environs as the fine Georgian colony that it was becoming, rather than the squalid penal settlement that it had arguably been at the very end of the previous century. As such, the views depict an idyllic and pastoral landscape, none more so than the two views of the country houses of Wooloomaloo and Ultimo. Both appear in the best tradition of the 18th-century depiction of the English country house, were it not for the unfamiliar vegetation and, in the case of Ultimo, a small group of distant kangaroos leaping across the lawn.

The views are all of a roughly identical size (12 x 18 inches) and include, along with their depictions of topographical features, numerous vignettes of aboriginal peoples (including some of the earliest images of cross-cultural interaction), Europeans, carriages, boats and general daily life. In addition to this, a couple of the views (nos. 3 & 4, 9 & 10, 11 & 12, and 17 & 18) form panoramas when placed end-to-end and were presumably intended to be cut down and mounted as such.

View of the seat of Ultimo, near Sydney, New South Wales 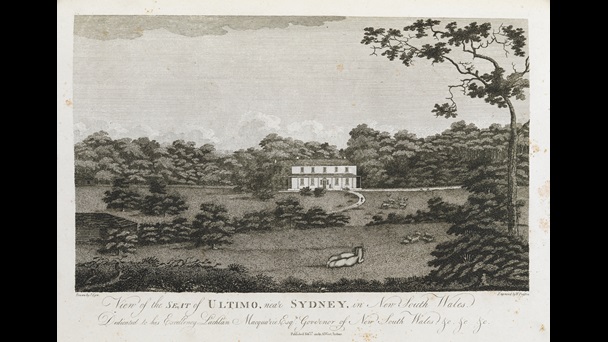 Ultimo House, built in 1804 for the surgeon John Harris, was one of the grandest houses in Sydney

Unsurprisingly for a settlement in which only around two-tenths of the population were freemen, the contributing artists and printmakers were overwhelmingly convicts (with the exception of John William Lewin, the naturalist and artist, after whom two of the prints were engraved). The main dramatis personae were as follows:

As so often, the history of publication is complex. It seems that West, possibly convinced by Philip Slaeger, decided to supplement his brewing business in March 1812, when he advertised (on 21 March in the Sydney Gazette) two views of Sydney engraved by Slaeger, presumably after drawings by Eyre. These were extremely well-received and well-reviewed, though oddly, they were not reproduced in the following sets of plates.

Newcastle, in New South Wales, with a distant view of Point Stephen 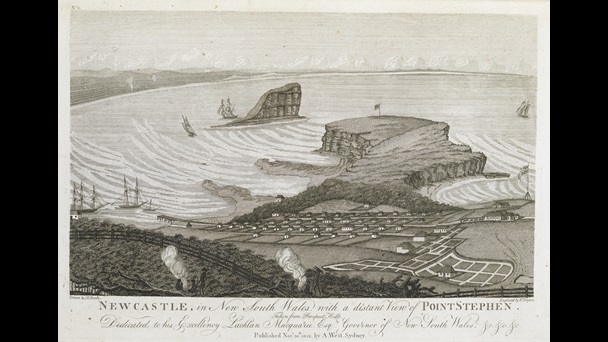 Inspired by both the success of his venture and, we can assume, the arrival of the skilled engraver Walter Preston, West announced on 7 November that a set of 12 views would be available at the end of the month, priced at the relatively expensive £3 for the set. The views were delayed which forced West to apologise on two occasions, blaming the ‘sudden indisposition of one of the Persons employed in their Completion’ and because demand had ‘far exceeded his Expectations’. Finally, he was able to issue an advertisement on 1 January 1813 that the views had finally been published. The advertisement for these and the subsequent set is bound with the views in the British Library. Two of these views (those of Newcastle) were after Brown and the others after Eyre, with two engraved by Slaeger and the others by Preston.

Paper was scarce in the colony. Recent conservation work at the National Gallery of Australia has revealed that West’s views were initially printed on double-layered paper, presumably to compensate for the poor quality and thinness of the sheets and to ensure that printing was successful.

West had clearly begun to consider a return to England (he made several abortive attempts to sell up throughout late 1812 and 1813). However, he still found time to publish more views. Later that January, he advertised that two more views (namely the views of Woolloomooloo House and Ultimo House) were to be added to the existing set at 2 pounds, 2 shillings for the pair, both engraved by Preston after Eyre.

In May 1813, the total increased to 16 views, adding a view of the Hawkesbury River and an unidentified view to the original 12 and the two ‘country houses’. This unidentified view is, according to Sir William Dixon, presumably either the view of Parramatta (with a publication line for February 1813) or the view of Shark’s Bay (with a publication line for November 1812), though he opts for the former.  The next year, in March 1814, West announced that he now had 20 views available, which completed the set of views on single sheets with platemarks c. 12 x 18 inches. 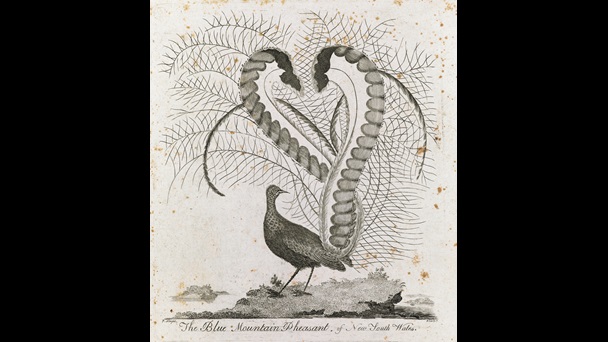 The superb lyrebird, first described in 1800 by Major General Thomas Davies at a meeting of the Linnean Society, is native to the forests of south-eastern Australia

West was finally able to advertise on 12 September 1814 that his full range consisted of 24 plates on 22 sheets, due to the addition of four inferior, smaller prints, including two non-views (namely, a natural-historical study of a superb lyrebird (Menura novaehollandiae) and a depiction of a Koori burial ceremony). This complete set was made available for the exorbitant price of £9. The first seven views in the set were engraved by Preston after Eyre (though the two views from St. Philip’s have no production line), the eighth by Preston after Lewin, and the other five were drawn and engraved by Slaeger.

The complete set appears to have been popular; the high price tag not deterring purchasers in New South Wales, who were anxious to see their colony in the best possible light. The prints were also seemingly available in Britain, despite a rather luke-warm public interest; the general population being less interested in genteel images of a functional colony than lurid descriptions of bloodthirsty or tragic convicts and sensational accounts of the newly discovered fauna and native peoples. This prejudice clearly did not affect the librarians of the ailing George III, who purchased a complete set for their monarch’s topographical collection sometime after 1814.

Outlines of Australian printmaking: prints of Australia from the last third of the 18th century, until the present time (Ballarat: Ballarat Fine Art Gallery, 1976)