What did Henry Fuseli mean to say about ‘topography’?

The opposition between topographical and imaginative landscape imagery has structured the understanding of landscape art in important ways over the last two centuries. If we were to look for the locus classicus, we do not need to look very hard. Henry Fuseli's Fourth Lecture on Painting as Professor of Painting at the Royal Academy includes a passage which has been quoted repeatedly for encapsulating – or seeming to encapsulate – the division.[1] The Lecture was first read at the Academy in 1804 and delivered to the students no less than thirteen more times before 1820. The topic of the lecture was ‘Invention’, and specifically, ‘Choice of subjects; divided into positive, negative, repulsive’.[2] In the course of his lecture, Fuseli effectively reworks the ‘hierarchy of the genres’ that had been codified in 17th- and 18th-century art theory. At the poles of worthiness are ‘positive’ subjects identified as those ‘commensurate with and adopted for the art’ that compel aesthetic dignity and elicit the highest moral and intellectual responses, and ‘repulsive’ subjects that are impossible to treat artistically and which should therefore be disregarded. On the one hand there are epic subjects from the Bible and allegory, on the other, inanimate or gross objects that can inspire no great thoughts howsoever well they might be painted. A further, middle class of ‘subjects negative and uninteresting in themselves’ is more ambiguous, for this ‘depends entirely on the manner of treating; such subjects owe what they can be to the genius of the Artist’. The base-line would be ‘scenes of vulgar life, of animals, and common landscape’. Above these there are religious subjects which lack narrative interest but might be made interesting by the artist; there are scenes of pomp and ceremony; there are portraits, which might be rendered pictorially interesting ‘by invoking the assistance of back-ground, chiaroscuro and picturesque effects’; and then there is:

the kind of landscape which is entirely occupied with the tame delineation of a given spot; an enumeration of hill and dale, clumps of trees, shrubs, water, meadows, cottages, and houses, what is commonly called Views. These, if not assisted by nature, dictated by taste, or chosen for character, may delight the owner of the acres they enclose, the inhabitants of the spot, perhaps the antiquary or the traveller, but to every other eye they are little more than topography. The landscape of Titian, of Mola, or Salvator, of the Poussins, Claude, Rubens, Elzheimer, Rembrandt, and Wilson, spurns all relation with this kind of map-work. To them, nature disclosed her bosom in the varied light of rising, meridian, setting suns; in twilight, night and dawn. Height, depth, solitude, strike, terrify, absorb, bewilder in their scenery. We tread on classic or romantic ground, or wander through the characteristic groups of rich congenial objects. The usual choice of the Dutch school, which frequently exhibits no more than the transcript of a spot, borders, indeed, nearer on the negative kind of landscape; but imitation will not be entitled to the pleasure we receive, or the admiration we bestow, on their genial works, till it has learnt to give an air of choice to necessity, to imitate their hues, spread their masses, and to rival the touch of their pencil.[3]

The images that would, then, satisfy ‘the antiquary or the traveller’ appear almost inevitably to fall short of the status of art, or at least art of any intellectual or aesthetic ambition.

Titania and Bottom, by Henry Fuseli 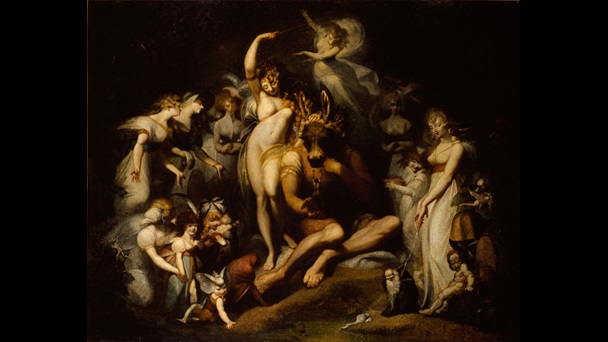 Fuseli's identification of topography as a ‘kind of map-work’ was interpreted at the time and latterly as suggesting a strongly hierarchical distinction between descriptive and imaginative landscape painting. The antiquarian and architectural writer John Britton went into print as early as 1812 to refute what was interpreted as Fuseli’s allegations:


we have been told that landscape painting is the lowest branch of the Fine Arts, and that those who practise it are little better than ‘topographers and map-makers’. Thus a whole class has been stigmatized for the insipidity, or tasteless puerility of a few of its members.[4]

Britton must have been responding to the lecture as it was spoken at the Academy, or reports of it. His initial draft was apparently far more explicit and critical of the Professor of Painting, and as Sam Smiles has noted, J.M.W. Turner – a friend of both Fuseli and Britton – was rather disappointed by the more muted comments that ended up appearing in print.[5] Nonetheless, the point had been made, and an interpretation established.

Fuseli’s text was included in the second edition of his Lectures on Painting (1820), published in the Life and Writings of Henry Fuseli (ed. John Knowles, 1830–
33) and then as part of the Ralph Wornum’s collected Lectures on Painting issued by the popular publisher Henry Bohn in 1848.  His comments on ‘tame delineation’ and ‘mere map-work’ have been quoted numberless times since as evidence of the divide between artistic landscape painting and documentary topographical imaging, much along the lines set by Britton in 1812. As John Barrell asserts in his incisive critique of the exhibition Constable, Gainsborough, Turner and the Making of Landscape (Royal Academy of Arts, London 2012–13), the historical narrative which arises from such a division underpins the most entrenched and pervasive ideas about landscape painting in Britain. In Barrell's view, this was simply re-stated, uncritically, by the exhibition, for it told (and he quotes the exhibition booklet):


how there was in the 18th century a variety of landscape called ‘topography,’ sometimes ‘strict topography,’ which was committed to ‘the accurate recording of particular places’ … Eventually, however, in the early 19th century, topographical art was transcended by something infinitely more serious and more powerful, a sublime style of painting that sought to represent the ‘grandeur of nature’, and to produce in us ‘feelings of awe, fear or horror.’[6]

However resilient, it is the case that it has been challenged repeatedly over the last thirty years or more, which fact must help explain the note of obvious exasperation in Barrell's polemic. Accounts of landscape imagery that propose it can ‘only’ or ‘simply’ represent the truth of the natural world have long been under scrutiny, while the ideological content of landscape painting has been a primary focus of progressive scholarship in art history and visual culture studies. With reference to British landscape art more particularly, there was a highly concentrated and hugely influential chain of scholarly contributions by among others Barrell, David Solkin, Ann Bermingham and Michael Rosenthal which, in the 1980s and early 1990s, reshaped British art history at large. Even that seminal body of work had, though, focussed primarily on oil painting and the most obviously ambitious forms of watercolour painting. More recently still, Andrew Kennedy, Stephen Daniels, John Bonehill and others have also subjected topographical and antiquarian landscape imagery to serious critical scrutiny. Landscape imagery has been re-situated in a more encompassing visual culture of print, exhibition and display as these emerged in the late 18th and early 19th century, with the exhortation that ‘topography should be analysed in relation to larger structures of knowledge and value and the changing technologies and communication systems of this nascent consumer society’.[7] Even as the opposition of topographical imagery to ‘art’ was set out seminally in the early 19th century, and by Fuseli most influentially, the possibilities for a much more productive confusion of categories was being actively entertained, for personal, professional, and commercial reasons. This, at least, is what becomes clear when the range of media and contexts addressed by historians of landscape art is expanded sufficiently, to include ‘topographers and map-makers’ as well as canonical figures like Turner and Constable. But it is also the case that Fuseli's famously divisive comments on landscape and ‘map work’ are worth revisiting. We can note that in counting landscape among ‘negative subjects’ which ‘owe what they can be to the Genius of the artist’, he grants the depiction of place a pivotal role in the hierarchy of cultural values. Claude and Rubens and Salvator Rosa are placed pretty firmly on one side of the divide. But even the Dutch school only ‘borders’ on the ‘negative’. He dramatizes, rather than simply dismisses, the act of representing an identifiable locale. This is a point which would have been made more emphatically in passages deleted from the original manuscript:


Our own school in this very branch has embodied scenes of nature so novel, real combinations so original or charming with so much taste equal Judgement & powers of execution, that the transcript vanishes in the choice of Genius. Such is the display of oriental grandeur in ruins or still subsisting, such as the aweful scenery of Wales & the romantic windings of our rivers . . . There are scenes of Nature in themselves so novel, with features so original, charming & astonishing; real combinations so curious & unusual, that nothing but a judicious Transcript is wanted, to impress us with all the effects of Genius.[8] 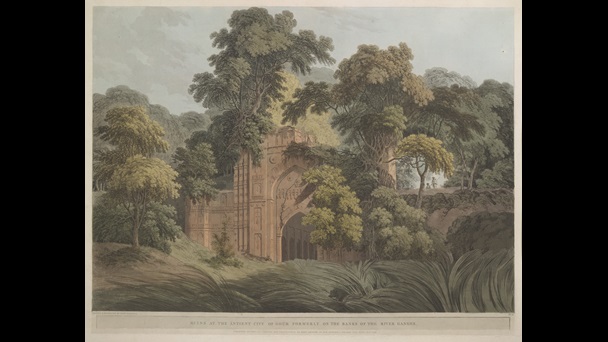 Plate 4 from the first set of Thomas Daniell's Oriental Scenery, depicting the jungle choked ruins of Gaur, a city situated on the present-day Bangladesh-India border.

View between Llandrillo and Corwen on the River Dee 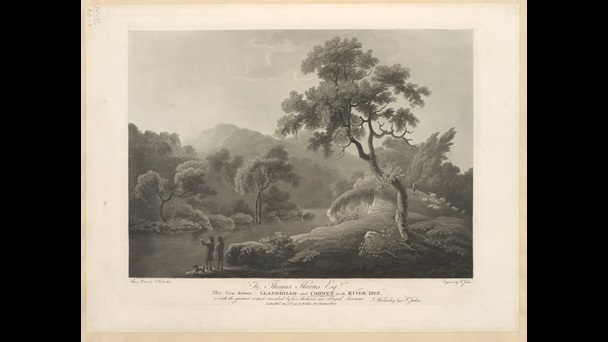 An aquatint example of ‘the aweful scenery of Wales & the romantic windings of our rivers’ engraved by Francis Jukes, after Thomas Walmsley.

The drafting of this passage at least makes room for a more nuanced position, one which could be reconciled with Fuseli's known admiration of J.M.W. Turner, the artist who perhaps more than any other would exemplify the possibility that the recording of nature could also be sublime. Turner’s disappointment at what he perceived to be Fuseli’s dismissive attitude perhaps gained a sharper edge in this context. It was not, it seems, Fuseli’s original intention to set out his argument in such stark terms.

The Drawing of the Clyde, after J M W Turner 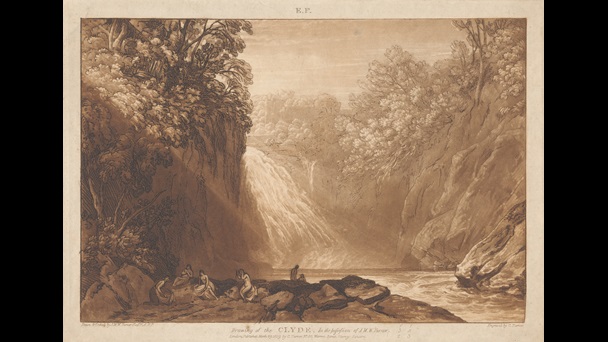 This mezzotint, after a composition by J. M. W. Turner, appears in the Liber Studiorum (c.1806–24) a series of prints published by Turner showcasing a selection of his landscapes and seascapes

In the end, the distinction Fuseli set out to make does not appear to be between landscape images that represent identifiable places and landscape imagery of a more abstracted character; nor, even, between landscapes painted with imaginative ambition and landscapes painted in imitation of appearances. It was a distinction within an expanded field of landscape imagery between scenes that could inspire moral interest or sensation, and scenes that were uninteresting. What was crucial was not some sort of fixed genre or category of imagery, but the taste and judgement of the artist in choosing his subjects. By that measure, even imagery that we might classify as topographical could qualify as artistically legitimate. Partly published, partly discarded in draft, Fuseli’s fuller thoughts on topographical imaging may have only half-surfaced; but they set out a more complex understanding of the topic than has been routinely espoused in the dominant accounts of landscape painting that emerged in the succeeding two centuries.