The British Library holds William Burrell’s research materials from the 1770s and 1780s towards a history of Sussex which remained unpublished at his death in 1796. John Farrant explores how his work was of great value to later historians and underpinned the county histories which appeared between 1815 and 1835, while the 1,300 watercolours of views, antiquities and buildings continue to be a treasure trove for researchers.

The context of the county history

Queen Elizabeth I’s reign saw a renaissance in historical studies, with the county emerging as a major focus of interest. This led to the establishment of the ‘county history’, a printed book dedicated to a varying range of topics related to its chosen territory, but always with a concentration on the past, whether the physical remains of human activity (the antiquities), the history of institutions such as the diocese or borough corporations, or the ancestry of the landowning families.

From the 17th to the early 19th centuries, to embark upon writing a county history was a not uncommon challenge, although most of the contemporary aspiring authors failed to publish during their lifetimes and many put their mental and financial health at risk. Most were country gentlemen or clergy and a significant minority were lawyers.

The pace of the necessary research and of publication varied greatly from county to county, and Sussex, a laggard, had to wait until 1835 for a history of the whole county. But that was not for dint of trying, and William Burrell’s research materials from the 1770s and 1780s are one of the finest antiquarian collections in the British Library. Nothing from him was published before his death in 1796. But his bequest to the British Museum, along with the highly systematic organisation of his works, ensured that they underpinned the county histories which appeared between 1815 and 1835. Meanwhile, the 1300 watercolour views, landscapes, antiquities and buildings continue to be a treasure trove for researchers. Indeed without the foundation he provided, Sussex might well, like Hampshire, have passed the 19th century without a substantive county history.

William Burrell (1732-96) was the third son of Peter Burrell (1692–1756), a merchant and MP, of Mark Lane in the City of London, with a country seat at Beckenham, Kent. From Westminster School in January 1743, he entered the University of Cambridge and graduated as a bachelor of laws in 1755 and five years later as a doctor of laws. Thus qualified in ‘civil law’ rather than ‘common law’, he practised in the ecclesiastical and Admiralty courts from Doctors’ Commons rather than an inn of court. Elected MP for Haslemere in March 1768 on the family interest, he steadily supported the administration. His most prominent contribution to parliamentary business was in November 1772, seconding the investigation into the East India Company and serving on the secret committee—probably at the prompting of his future father-in-law, Charles Raymond of Valentines, Ilford, Essex, leader of the East India shipping interest and a critic of the directors.

In 1773 Burrell married Sophia (1753–1802), who gained a reputation as a poet and dramatist. They brought up at 71 Harley Street, Marylebone, London, the five children who survived infancy. Although his wife's fortune was said to be the great sum of £100,000, he needed a secure income—which came from appointment as a commissioner of the excise in March 1774, whereupon he resigned from parliament and from Doctors' Commons. He was a director of the South Sea Company (as his father had been), 1763–75, and (in place of Charles Raymond) of Sun fire insurance, 1773–95. His father-in-law was made a baronet with remainder to Burrell in 1774, and he succeeded to the title in 1788. 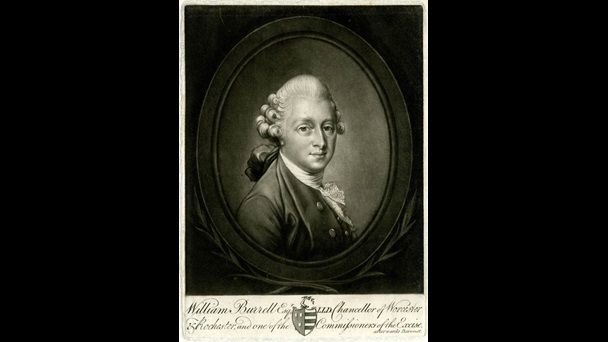 William Burrell Esq, after an original portrait by Richard Cosway.

Despite his upbringing and career within the London-based mercantile-governmental nexus, by 1770 he was working on the history of Sussex. His great-grandfather's estate in central Sussex had mostly passed out of the main line, but the remnant had unexpectedly devolved on his grandfather, the ninth son, and on his father. His uncle Merrik Burrell, former director of the Bank of England, had bought back the rest. That achieved in 1768, perhaps Sir Merrik, the bachelor baronet, about to rebuild West Grinstead Place as his country seat, wanted his place in county society to be recorded for posterity within a county history.

Burrell suffered a stroke in August 1787 and, though he recovered his speech, lost the use of his left arm. Wealth cascaded onto him at his father-in-law's and mother's deaths, but too late to buy leisure for research. He resigned from the commission of excise in September 1789, and in 1791 retired to The Deepdene, Dorking, Surrey. His active researches now ended, he offered his collections to John Nichols, but Nichols declined to print them and the principal drawings at his own risk, for he was committed to his own history of Leicestershire. So Burrell bequeathed them to the British Museum library, now British Library.

Burrell died in 1796 and was buried in the family vault at West Grinstead, Sussex. Simple monuments by John Flaxman are both there and at Cuckfield. Few of his working notes or private or business papers have survived, much probably being lost by fire in 1904 at Knepp Castle, Shipley, Sussex, the family seat his eldest son built on the estate Burrell had acquired through his father-in-law.

Friend and fellow director of the South Sea Company, Benjamin Way (1740-1808), wrote to his brother-in-law, John Baker Holroyd (1735-1821), in November 1770, ‘Dr Burrel [who as an MP had free postage] gave a frank on condition of your sending him (through me) a drawing of your mansion for the Sussex History.’ The mansion was Sheffield Park at Fletching which Holroyd had acquired the previous year. So by late 1770 Burrell had a well-formulated project for an illustrated history of the county. ‘’tis also said,’ fellow lawyer and Sussex antiquary John Elliot noted in 1773, ‘Dr Burrell has formed a large collection of materials, with a view to publishing the History, or a Deduction of the landed property, of this county, from the Norman Conquest, in the manner of Dugdale’s Warwickshire; but ’tis said that work is not in any degree of forwardness.’

In the Revd Philip Morant’s newly published History and antiquities of the County of Essex (1761-8) Burrell had a recent model of the desirable final outcome, with at its heart an account of manorial lordships, the most elaborately-documented feature of the county’s past, and a determinant of the structure of county society in their day, unaffected by the wider scope adopted by some county historians. In working method he may have been influenced by the Revd William Cole whom he had first met in Paris in 1765 and thereafter in or around Cambridge. In the 1740s Cole was transcribing archives and visited nearly every Cambridgeshire church, making far more thorough notes than Burrell was to do, and continued to refine his parochial topographies into the late 1760s. He was also later to bequeath his extensive collections to the British Museum, now British Library.

Burrell’s work on archives was in progress in 1771. Surveys of the monuments and registers in parish churches began in earnest in September 1772. The years from 1774 to 1786 were those of his greatest activity. When in London he was abstracting archives in the British Museum, maybe in the Tower of London and Norfolk House as well, and copying from documents lent to him, working with a clerk to organize material into the ledger volumes (in their final format by 1778), and corresponding with parochial clergy. The first tour to visit Sussex churches was in September 1774 and the tours continued each Whitsun for at least 11 years with a summer one as well in some years. In 1775 he first commissioned pictures from the Lewes artists James Lambert and his nephew James. After touring in 1777 with Francis Grose, he may have appreciated having a draughtsman with him, and from 1780 S. H. Grimm accompanied him for at least part of the Whitsun tour.

Diary of a tour in Sussex 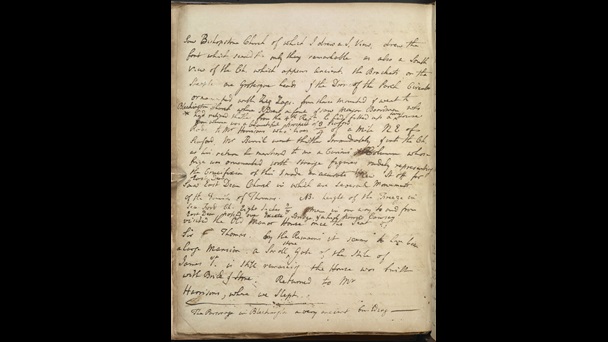 Francis Grose recorded his tour of Sussex with fellow antiquarian William Burrell in his journal.

After his stroke and on retiring to The Deepdene early in 1791, he left his Sussex collection in Harley Street and made his last trip to Sussex churches and muniment rooms that summer. That his active researches were ended by June 1794 is sadly reflected in a letter dictated to his wife: ‘I have none of my Sussex Books here, … and it would be a difficult task to decipher many parts of [them], even if my health permitted me to continue collecting information respecting antiquities in Sussex.’

Burrell transcribed documents, often initialling the original, in the keeping of the great landowners, stewards, lawyers, and clergy, as well as copies made by Sussex antiquaries such as John Elliot. He visited at least two-thirds of the churches, mainly in 1773–8, to transcribe the monumental inscriptions and make extracts from the parish registers, and elsewhere the clergy responded to his enquiries.

Burrell was exceptionally diligent in collating his materials. What he bequeathed, in several series of volumes arranged mainly by parish within rape in Sussex, were fair copies in his own or a clerk's neat hand. The main sequence comprises 15 large folio volumes each of some 600 pages: 12 by manor within each of the six rapes (subdivisions of the county since the 11th century), containing mainly notes from primary sources on the descent of property, and three by parish within rape, of extracts from parish registers, monumental inscriptions and notes on churches and incumbents. 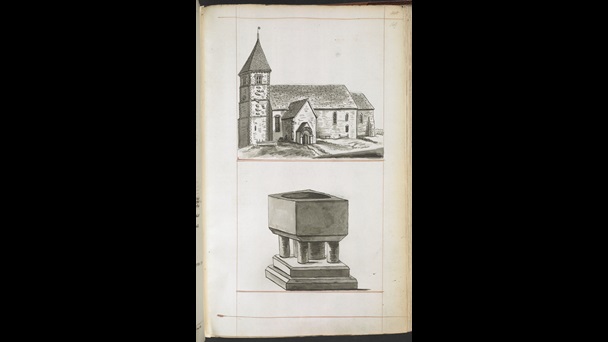 Francis Grose's drawings of the church and font at Bishopstone were copied for Burrell's own records.

Notes on the Manor of Bishopstone 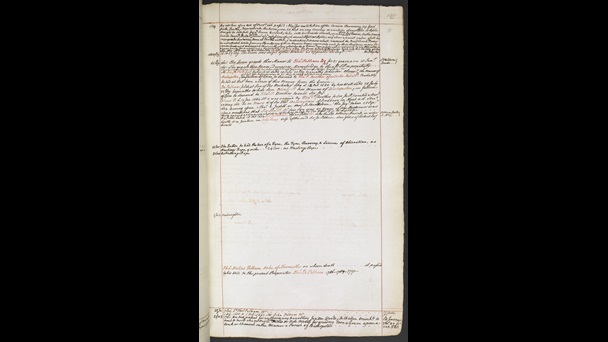 Burrell was a diligent researcher, as is proved by his notes on the Manor of Bishopstone.