Jackie Marsh explores the importance of children's play with objects

From the first months of a child’s life, playing with things is an integral part of their everyday activities. ‘Things’, in this context, can include anything from toys and household objects to natural objects and materials. Whatever is to hand often becomes the focus for children’s play. At first, objects are at the centre of sensory play as children watch, feel, and/or suck them. Objects then become important to imaginative play as older children begin to embed objects in fantasy scenarios, for example playing with a toy tea set, or pretending that one object (such as a stick) represents another object (such as a horse). Objects can also be deployed in games with rules, such as board games, and play that takes place in groups, such as football. In short, ‘things’ are so integral to many aspects of play that it makes sense to consider this category as a cross-cutting one that can be found in language, physical, pretend and many other forms play.

A short recording of the game 'conkers'

Toys are the dominant objects in children’s play. Handmade toys have a prehistoric origin, with a range of toys found at various archaeological sites across the world. For example, dolls, whistles and a miniature stone vehicle with axles and wheels were found at a dig near the town of Qoser, which is in the south of modern-day Turkey. Archaeologists have identified that the vehicle is around 7,500 years old, with other toys found at the site, such as dolls and whistles that were assumed to originate in the fourth and fifth millennia. Excavations of the Indus, Egyptian and Mesopotamian civilisations have led to the discovery of dolls, rattles, wheeled horses and puzzles. It is not certain that all of the objects that have been found in archaeological digs were toys for children, as adults may have owned them, or indeed the objects may not have served the purpose of toys. For example, toys that replicate weapons have been found in many civilisations, with sticks serving as swords and homemade slings or bows and arrows enabling children to engage in play fighting. In some ancient cultures, however, such as ancient Rome, these were not seen as toys but the ‘real thing’.

This footage was captured in London in 1957 and shows a boy playing on the streets with his bow and arrow.

This footage, filmed in 1947, offers an insight into children’s play and the materials available to them shortly after the Second World War.

Handmade toys vary across cultures because of the materials to hand in any given context. For example, children in Indonesia produce handmade cars using the local Jeruk Bali fruit and coconut fronds, whilst children in Papua New Guinea create ‘pu abu’, which is made from grass and wood and consists of a whirling piece of wood that creates a humming sound. In those cultures in which children have limited access a range of materials, toys may be made from discarded materials such as plastic bags and elastic bands (used to make footballs) and metal wire (used to make vehicles).

This footage was shot in 1947 as part of an educational film aimed at ex-servicemen who were turning to teaching after the end of the Second World War.

Toys have historically played an important role in the enculturation of children into the values and history of a given community. For example, this card game, entitled ‘Magna Carta’ or ‘Knight Errantry’ was designed to enable young people to be introduced to the codes of chivalry: 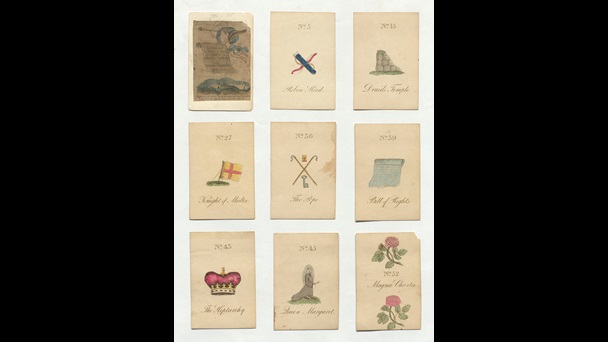 A card game which was created as an aid for players to learn the codes of chivalry.

The advent of the industrial revolution in the late 18th and 19th centuries led to the mass production of toys, such as the jigsaws created by John Spilsbury in the mid-1700s.

These developments meant that handmade toys became less pervasive in industrialised countries and tended to only be produced by parents who enjoyed craft-like activities, many of whom lovingly crafted toys such as dolls’ houses and go-karts.

This recording was made by Iona Opie in Wythenshawe, Manchester, in 1976, and discusses games played with whips and tops.

As suggested previously, play with objects is frequently linked to other types of play such as pretend play, or language play. The folklorists Iona and Peter Opie recorded a wide range of toys and artifacts that permeated play in the mid-twentieth century, such as marbles, fivestones, balls, skipping ropes and tops (Opie and Opie, 1997). Many of the games incorporating such objects also involved chants and rhymes, well documented by the Opies. For example, in this extract, Iona Opie, discusses skipping songs with a group of girls in St. Patrick's Roman Catholic Primary School, Huddersfield in 1978.

This footage was filmed in London in 1957 and shows children playing the popular game of marbles.

This film was taken in Keighley, Yorkshire in 2002.

The Opies also documented a number of ‘crazes’ in which particular objects rapidly became popular with large numbers of children for a period of time, such as milk-bottle tops, or clackers (balls on string that clacked together as they were swung around). An example of a more recent craze is loom bands, bracelets made from weaving elastic bands together. These crazes are likely to disappear as rapidly as they appeared in the first place.

Whilst a study of play with objects inevitably includes a focus on the toys and artefacts identified above, it should be noted that children have also always played with natural objects and materials. Stones, leaves, mud – all have been marshalled into children’s imaginative and language play. Here, for example, is an episode of play at Monteney Primary School, Sheffield, in which children create ‘nests’ from grass cuttings.

Created in 2010, this film shows two children in Reception class at a Sheffield school building nests out of grass clippings and leaves

It can be seen from this brief review that play with things has been an important aspect of play over centuries. As technology has advanced, however, the materials used to create playthings, as well as the playthings themselves, have changed. Digital toys have been popular in many countries for the past few decades. For example, in contemporary homes, many children now play with dolls and other artefacts that can be characterised by the phrase the ‘Internet of Toys’. These are toys that link offline play with online activities, such as Disney Infinity characters, plastic figures that link to video games. This relationship between toys and technology has historically led to adult concerns, with older people anxious about young children’s play being dominated by toys and artefacts that were unknown to previous generations. This pattern is unlikely to change in future decades, as we will inevitably confront media concerns about robots, or play with virtual reality toys. These concerns appear not to acknowledge that change is inevitable. What is consistent across time, however, is the creativity and imagination children bring to their play with things.

More articles on Playing with things