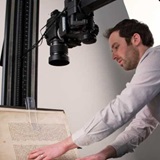 The British Library’s Imaging Services team used its extensive preservation expertise and state-of-the-art equipment to photograph 350 rare Greek manuscripts from as far
back as the 11th century.

It's possible for researchers anywhere in the world to study the manuscripts in greater detail than would ever be possible with the naked eye.

Andrea Clarke was the lead curator on the project and is delighted that some 900 manuscripts are now “fully digitised and we are delighted to be able to make this
important and rich collection freely available on our Digitised Manuscripts site”.

There were many highlights among the collection including the Howard Greek Lectionary
and the Codex Crippsianus.  One item that brought particular appeal was “The Divine Liturgies”, a manuscript written in 1600 at the monastery of the Virgin Demitrash, near Brusa.  The work contains intricate images of several Saints including Basil the Great and there is fine artwork throughout the piece.  The Divine Liturgies also has 17th century, crimson velvet binding, which for preservation purposes is kept separately to the manuscript.

Andrea was impressed that British Library’s Imaging Services delivered “excellent
high-resolution, zoomable images” which allow “for researchers anywhere in the world
to consult the manuscripts and to study them in greater detail than would ever be possible
with the naked eye”.

…"We were delighted with the British Library service offering onsite photography at our convenience: it was efficient and enjoyable, and produced the most beautiful images." John Sunderland, Friends of Malmesbury Abbey…

Malmesbury and its Abbey, had one of the most important libraries in Europe in the Middle Ages, and the famous historian William was from Malmesbury. The Friends of Malmesbury Abbey commissioned the British Library to digitise four volumes of the bible, known as the Malmesbury Bible earlier this summer.

…This project makes a number of our most important globes available beyond the British Library’s Reading Rooms and exhibition galleries, to a wider audience and in a more imaginative way than ever before.…

Using 3D photography, the British Library’s rare and fragile collection of historical globes have been digitised and made available for the public to discover via augmented reality.