An introduction to The Beggar’s Opera

The Beggar's Opera was an instant hit and became the most performed play of the 18th century. Moira Goff explores the elements that made up John Gay's work, from its popular tunes and dances to its satirical targets and depiction of a criminal underworld.

The Beggar’s Opera had its first performance at London’s Lincoln’s Inn Fields Theatre on Monday 29 January 1728. It was a sensation, drawing enormous audiences and enjoying a record of 62 performances before the end of the 1727–28 season that June. This first ballad opera established a new dramatic form on the London stage, inspiring many similar works in the following years. It continued to be played in London’s theatres every year into the 19th century, reached many theatres elsewhere over that period and influenced stage musical works into the 20th century, most notably Brecht and Weill’s The Threepenny Opera. The Beggar’s Opera was undeniably successful in its day and remains influential.

Playbills for performances in London and Bristol, 1774‒77 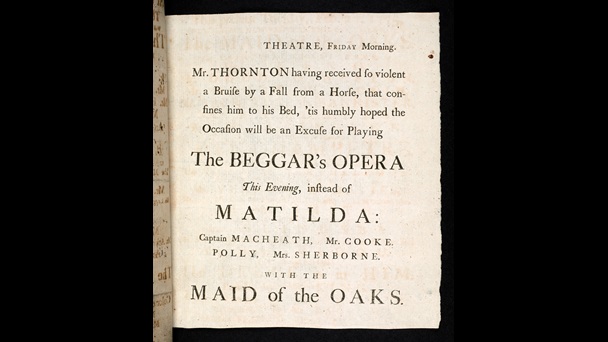 The Beggar’s Opera was the drama most performed in the 18th century – a reliable back-up in emergencies. When an actor suffered a violent ‘Bruise by a Fall from a Horse’ in 1775, it was ‘an excuse for playing The Beggar’s Opera’.

The ballad opera was the idea of the writer and dramatist John Gay (1685–1732). He wrote the play and chose a wide variety of popular tunes for the ballads for which he provided the words. London audiences were used to evenings of mixed entertainments, in which tragedies or comedies (sometimes both) had singing, dancing and speciality turns between their acts. Some plays included interludes of singing and dancing, but a play with songs throughout, which were also an integral part of the drama, was entirely new. 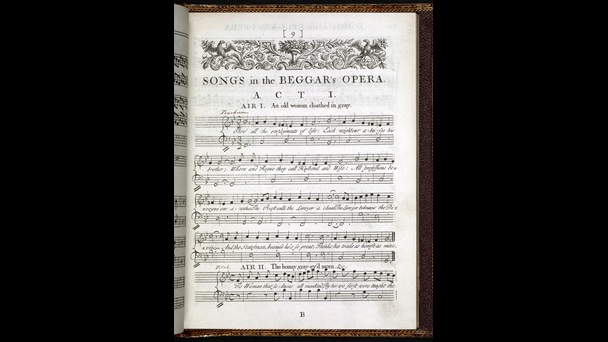 The work is often described as the first musical, mixing dancing and popular songs with spoken-word drama. In the first song, Gay exposes the dishonesty of contemporary statesman.

The immediate context for Gay’s ‘opera’ was not only the elite Italian opera given at the King’s Theatre in the Haymarket but also the competition between the only two theatres allowed to perform plays, Lincoln’s Inn Fields and Drury Lane. They had to meet audience demand for novelty. There was avid public interest in the underworld, fostered by London’s newspapers with their detailed reports of criminal exploits and many ‘biographies’ and ‘memoirs’ of the most notorious lawbreakers. Beyond these theatrical and lowlife contexts was the wider political world, dominated at this period by the man now known as Britain’s first prime minister – Sir Robert Walpole – whose corruption was an open secret.

A General History of the Lives and Adventures of the Most Famous Highwaymen, Murderers, Street-Robbers This lavish volume, published in 1734, is one of the many works which exploited the public appetite for daring criminal exploits.

The Beggar’s Opera is set in and around London’s Newgate Prison. It opens with a scene in which the Beggar justifies the title of ‘opera’ to a Player. In the first act, Peachum and his wife (thief-takers and receivers of stolen goods) learn that their daughter Polly has married the highwayman Macheath. They resolve to turn him in for a reward, but Macheath escapes. In Act 2, Macheath diverts himself among his favourite harlots. One of them betrays him, and he is arrested and taken to Newgate. There, he is confronted by Lucy Lockit (daughter of the prison-keeper) whom he has made pregnant and promised to marry. Polly arrives to claim Macheath as her husband, and the two women quarrel. Lucy helps Macheath to escape for a second time. In the third act, Lucy tries to poison Polly but fails. Macheath’s hiding place is revealed by a confederate, and he is arrested again. As he is brought back to Newgate, Polly and Lucy plead with their fathers to spare him but Macheath is tried, convicted and sentenced to death. He is only spared execution when the Player from the opening scene objects to the tragic ending, and the Beggar agrees that an ‘opera’ must end happily. Macheath is reprieved to enjoy the opera’s final scene with Polly and his doxies.

1921 edition of The Beggar's Opera, illustrated by Claud Lovat Fraser 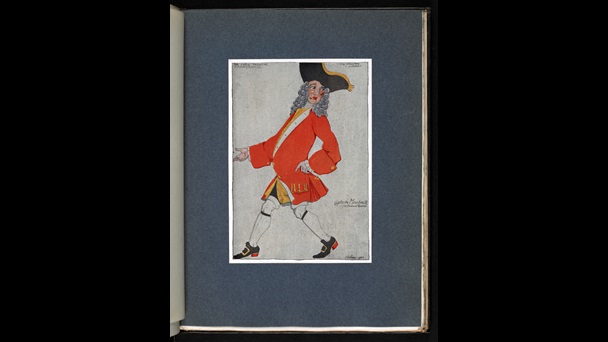 This painting shows Frederick Ranalow playing Macheath in a dashing scarlet coat designed by Claud Lovat Fraser. It was part of the Lyric Theatre’s spectacular revival of The Beggar’s Opera, 1920–23.

The ballad opera was published within little more than a fortnight after the first performance, with a second edition appearing less than two months after that. Both included the music for the songs, but it was only the third edition of 1729 that gave these and the overture in full. As well as the ballads to well-known tunes throughout the action, The Beggar’s Opera included a number of dances which rapidly became a favourite feature of productions. There was a cotillon by Macheath and his whores, a ‘Dance of Prisoners in Chains’ (soon replaced by a hornpipe, usually given as a solo by a popular performer) and a country dance by the opera’s characters at the end of the piece. 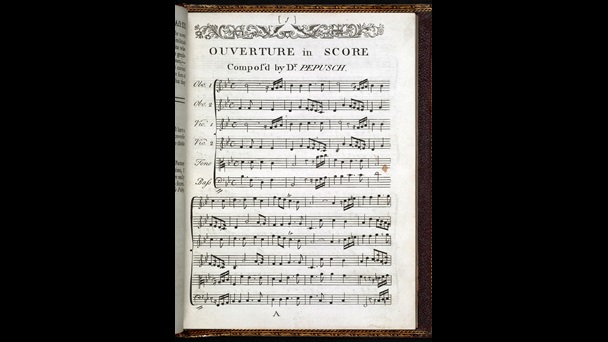 The stars of the show were Thomas Walker as Macheath and Lavinia Fenton as Polly. Both were depicted in popular prints during the ballad opera’s first run. She was also the subject of a biography, The Life of Lavinia Beswick, Alias Fenton, Alias Polly Peachum, not least because she became the mistress of the Duke of Bolton and left the stage altogether before the end of the year. Walker was not deemed worthy of a biography, but hi character Macheath was accorded the Memoirs concerning the Life and Manners of Captain Mackheath. Both of these anonymous works were published in 1728, marking a key point in the development of celebrity culture.

Letters from John Gay to Jonathan Swift about The Beggar's Opera, 1728‒29 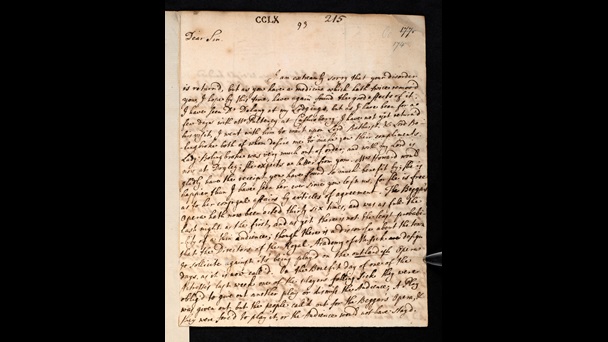 In this letter, written only two months after his ‘opera’ opened, Gay says that Lydia Fenton is now in ‘so high vogue’ that ‘a Mezzo-tinto Print’ of her has been published.

The Beggar’s Opera also caught the attention of the artist William Hogarth (1697–1764), who painted many versions of the scene in which Polly and Lucy plead for Macheath’s life. Gay’s satirical approach to politics and fashionable life and his use of both high and low culture echoed Hogarth’s own practice in his visual satires, seen in series such as A Harlot’s Progress (1732) as well as in many individual prints. 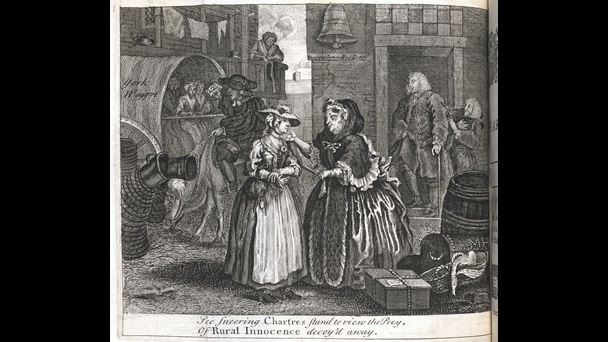 This series of prints by Hogarth (1733) charts Moll Hackabout’s heart-rending fall from an innocent young girl to a wretched prostitute, after her arrival in London.

The most immediate and obvious target of Gay’s satire was Italian opera. This had been introduced to London in the first decade of the 18th century and had quickly become the touchstone for elite culture. It was exorbitantly expensive and, to most English ears, incomprehensible as well as absurd. In the opening scene of The Beggar’s Opera, the Beggar pleads ‘I hope I may be forgiven, that I have not made my opera throughout unnatural, like those in vogue’. London’s most popular composer of Italian opera was the German, George Frederic Handel. Gay capitalised on the extravagant behaviour of operatic divas. When he had Polly and Lucy quarrel in Act 2, he was reminding audiences of the quarrels between Faustina and Cuzzoni that had bedevilled both Handel’s and Bononcini’s operatic productions the previous year. Gay used music by both composers in The Beggar’s Opera. This elegant third edition includes all Dr Pepusch’s musical arrangements. Here he adapts a march from Handel’s Rinaldo (1711) – one of the fashionable operas which Gay used and satirised.

Sir Robert Walpole had come to power in the wake of the 1720 financial crisis known as the South Sea Bubble. When George II succeeded George I in 1727, Walpole had clung on with the support of the queen. Walpole was widely regarded as corrupt (even by the notorious standards of the age) and had many enemies, notably among the literary establishment. The Beggar’s Opera was quickly seen as an attack on Walpole; although he is not directly represented, – Peachum, Lockit and Macheath all have facets of his character. Walpole responded by suppressing Polly, Gay’s sequel to The Beggar’s Opera intended for performance the following season. Nevertheless, Polly was published in 1729 and became a best-seller, even though there was no performance of this new ballad opera until 1777. John Gay’s plush edition of Polly was published at his own expense and bound with The Beggar’s Opera. In the preface, he relates how the work was ‘supprest’ and ‘not allow’d to be acted’.

Peachum is widely agreed to have been based on the notorious ‘Thief-Taker General’ Jonathan Wild, hanged at Tyburn in 1725. Wild was immediately immortalised in a variety of biographies as well as fictional accounts of his life, including A True and Genuine Account of the Life and Actions of the Late Jonathan Wild (1725), attributed to Daniel Defoe. Gay’s main inspiration for the character of Macheath was the thief, gaol-breaker and occasional highwayman Jack Sheppard. In 1724, Sheppard had become a celebrity following four daring escapes from prison, including two from Newgate, before his execution at Tyburn on 16 November. Sheppard was the subject of even more publications than Wild. A Narrative of all the Robberies, Escapes, &c. of John Sheppard, also attributed to Daniel Defoe, ran through many editions.

A General History of the Lives and Adventures of the Most Famous Highwaymen, Murderers, Street-Robbers 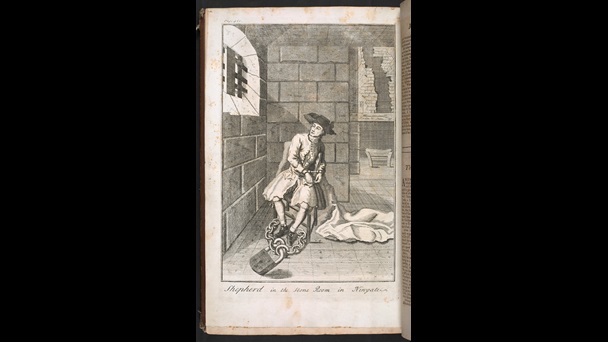 This engraving shows Jack Sheppard ‒ the notorious thief and gaol-breaker – bound in chains in the Stone Room at Newgate Prison.

In the 1720s, the rivalry between Lincoln’s Inn Fields and Drury Lane was played out through competing productions of another new dramatic form – the pantomime. Sheppard’s notoriety was such that the Drury Lane Theatre used his story for a new pantomime, Harlequin Sheppard by John Thurmond junior, first performed less than a fortnight after Sheppard’s execution. Jonathan Wild was also featured in the piece, which was published in an attempt to exploit insatiable public interest.

London’s criminal underworld was the subject of many other publications in the early 18th century. Gay, like Hogarth with A Harlot’s Progress, probably had the bawd Elizabeth ‘Mother’ Needham and the celebrity prostitute Sally Salisbury in mind when he penned his scenes for the ‘Women of the Town’. Many of their names (like those of Peachum’s gang) can be found in A New Canting Dictionary, a guide to underworld slang published in 1725, pointing up their lowlife status and criminal calling. Gay’s characters’ names reflect their lives of trickery and corruption, and many of them are richly defined in the pages of this book. ‘Budge’ is ‘one that slips into a House in the dark’; ‘Doxies’ are ‘Wenches’ or ‘Whores’. The words ‘Betty’, ‘Filch’, ‘Mint’ and ‘Nim’ all relate to thieving.

The political context for The Beggar’s Opera soon became old news, but the work itself survived and continues to be revived because of its colourful depiction of lowlife characters and the perennial relevance of Gay’s lively and pointed critique of the rich and powerful. The ballad opera format, innovative in 1728, has proved long-lived. It is the ancestor of the ever-popular modern musical.

Photograph of a 1930s production of The Threepenny Opera, Moscow More articles on Theatre and entertainment

More articles on Satire and humour