David Crystal looks past the myths surrounding Samuel Johnson's Dictionary to discover a work of remarkable precision, sensitivity and attention to social and regional variation.

Read a media article about Samuel Johnson's Dictionary, and you will likely end up thinking it a very strange beast. A mythology has grown up around it which can convey the impression that the compiler was a humourless eccentric who wrote definitions reflecting his personality rather than the language. The reality is quite the opposite. 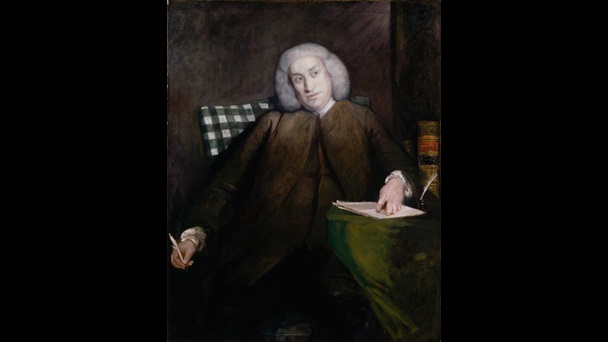 Johnson, posing with quill and ink, shortly after the Dictionary was published in 1755. 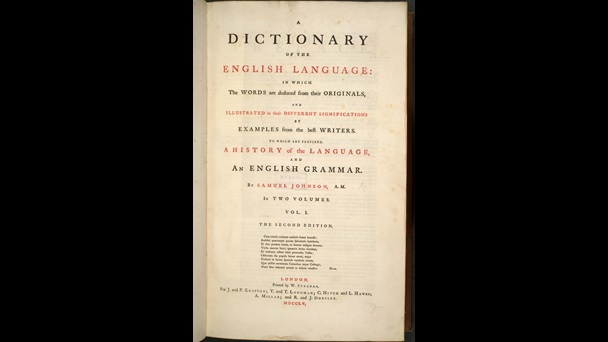 The title page for the second edition of Johnson’s ambitious work, 1755.

It's true that a few definitions have achieved notoriety due to the personal opinions they express. James Boswell was the first to point them out in his Life of Johnson. Characterising them as instances of 'capricious and humorous indulgence', he lists Tory, Whig, pension, oats, excise 'and a few more' – by which he means such entries as lexicographer, patron, reformer, palmistry and stockjobber. Their fame far exceeds their significance: although judgemental nuances are scattered throughout, I estimate that there are less than 20 really idiosyncratic definitions in the whole work – out of 42,773 entries (in the first edition) and 140,871 definitions. 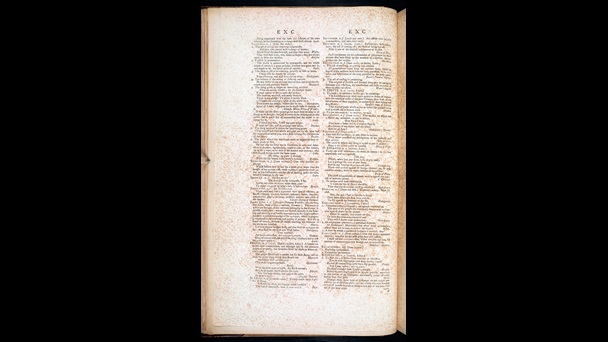 Johnson’s provocative definition of excise: ‘A hateful tax levied upon commodities, and adjudged not by the common judges of property, but wretches hired by those to whom excise is paid’. The Commissioners of Excise considered this libellous, but Johnson didn’t remove it.

The most famous example – oats, defined as: 'grain, which in England is generally given to horses, but in Scotland supports the people' – was almost certainly one of those in-jokes that lexicographers love to bury in their books. It would have been no more than a friendly dig at his amanuenses, five of whom, as Boswell points out, were from Scotland, and whose influence is reflected in dozens of allusions to Scottish English throughout the Dictionary. A similar sympathy pervades his famous definition of lexicographer: I've never met one of these individuals who did not delight in the characterisation of their profession as 'harmless drudgery'. 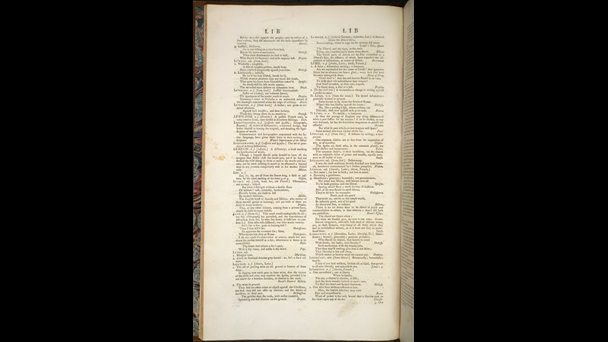 Lexicographer: ‘a writer of dictionaries; a harmless drudge, that busies himself in tracing the original, and detailing the signification of words’.

We mustn't dismiss that characterisation of 'drudgery'. Every lexicographer knows what this is – the need to handle with precision the grammatical words of the language (such as of, but), the everyday words (three, January), the remarkable number of words beginning with prefixes such as un- and self- and those verbs of 'vague and indeterminate' use, as Johnson puts it in his Preface, which play an important part in English idiom, such as make and do. His longest entry is for take, whose 134 uses (including phrasal verbs) take up 11 full columns of print. Such mammoth entries were unprecedented in English dictionaries, and they are remarkable in their attention to semantic nuance.

‘the labour of interpreting … words and phrases’

Of the two major dimensions in any dictionary – coverage (which items to include) and treatment (how to deal with them) – Johnson is in no doubt that treatment is the greater problem. As he says in his Plan, after talking about issues to do with selection and identification:

The great labour is yet to come, the labour of interpreting these words and phrases with brevity, fullness and perspicuity.

Samuel Johnson's Plan of a Dictionary of the English Language, 1747 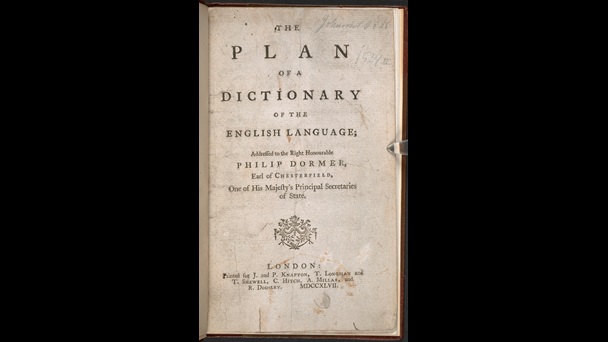 Johnson’s Plan was written with the aim of persuading leading booksellers to support his great venture.

It was indeed a huge labour, and when we look at his definitions today it's obvious how much thought must have gone into them. They are the Dictionary's primary strength, and its chief claim to fame. Anyone can get a sense of the problem by trying to formulate for themselves appropriate definitions for such words as effect, nature, relation and sign, then comparing their attempts with Johnson's entries. Use of the plural here, 'definitions', is important: most words have more than one sense. All require definitions that are clear, succinct, elegant and perceptive, and Johnson's achievement can be seen on any page.

For clarity and succinctness, see message: 'An errand; any thing committed to another to be told to a third'. For elegance, see history: 'A narration of events and facts delivered with dignity'. For perceptiveness, see sorry:

Grieved for something past. It is generally used of slight or casual miscarriages or vexations, but sometimes of greater things. It does not imply any long continuance of grief.

Johnson's definitions can also be humorous, such as his cheeky alliteration in heresiarch: 'A leader in heresy; the head of a herd of hereticks'.

Then consider the supposed 'difficulty' of his definitions, in such cases as network ('Anything reticulated or decussated, at equal distances, with insterstices between the intersections') or cough ('A convulsion of the lungs, vellicated by some sharp serosity'). Here too their presence has been exaggerated, for there are only a couple of dozen of them. To modern eyes, they do often seem lexically obscure, but they have to be seen in the context of the time, which was a period when 'hard words' were much more routine than today. The definitions would have been challenging, but not wholly obscure, to Johnson's contemporaries. We mustn't assume that the 18th-century sense of lexical difficulty is the same as ours today.

Johnson’s shift from purist to linguist

The mythology about Johnson has had all of the press attention. As a consequence it has hidden some of the properties of the Dictionary which deserve much more widespread recognition, and which arose from the great change in his thinking from purist to linguist. In his Plan, he had been unequivocal:

one great end of this undertaking is to fix the English language.

In his Preface he realises how absurd this notion had been:

Those who have been persuaded to think well of my design, require that it should fix our language, and put a stop to those alterations which time and chance have hitherto been suffered to make in it without opposition. With this consequence I will confess that I flattered myself for a while; but now begin to fear that I have indulged expectation which neither reason nor experience can justify. By the time he wrote his Preface, Johnson had realised that his plans to ‘fix’ the English language had been a mere dream, like ‘the elixir that promises to prolong life’.

The editions of the Dictionary published during Johnson's lifetime show the ongoing process of change at work. Especially revealing is the three-volume revisionary compilation made in the early 1770s, in which the entries from A to jailer, taken mainly from the third edition, with some from the first, are interleaved with blank pages. They contain changes and additions suggested by one of his amanuenses that Johnson then reviewed and marked up for publication. The alterations weren't used, but they bear witness to the way he had taken on board the necessity for a dictionary to keep pace with language change. Johnson scrutinised his assistant’s proposed changes, making cuts, additions and edits. He then used a system of letters and daggers to show where things should be inserted on the printed pages.

One of the consequences of his change of mind can be seen in his recognition of linguistic regional and social variations. The entries containing information about regional dialects are often ignored in accounts of Johnson's lexicography, but they are an important innovation. There are not many of them, but they fall into three main types: words from his home town Lichfield and the country of Staffordshire (e.g. gnarled, goldfinch, moreland, orrery, shaw); occasional observations about other English dialects (e.g. amper, atter, haver, onset); and above all usages from Scottish English (e.g. mow, scambler, sponk), which are common enough to suggest that his amanuenses were being used for more than just their copy-writing skills.

Similarly, the Dictionary contains a great deal of information about social and stylistic variation – observations about 18th-century usage or, at least, Johnson's opinion about contemporary usage. The stylistic range of the Dictionary is in fact very wide. At one extreme we find highly formal words of classical origin (adumbrate, prognostication, sagacity); at the other we find colloquial interjections (ay, foh, hist, look, right, tush, tut). The latter rarely get a mention in the media, and nor does his inclusion of social locutions (phrases) such as howd'ye, terms of address (servant) and gender differences ('women's words' such as frightfully and horrid). At the same time, being part of the spirit of his age, he routinely draws attention to words he considers improper, using terms such as 'bad', 'low', 'vulgar', 'cant', 'barbarous', 'ludicrous' and 'corrupt' to describe such words as alamode, budge, cajole, coax, desperate, nowise, plaguy and sconce. We can sense his concern to warn his readers about words which it might be dangerous to use in 18th-century 'polite' society. However, we should not exaggerate his attitudes: terms such as 'low' and 'vulgar' may have been intended to convey no more than the labels used by modern lexicographers (for example, 'informal').

Johnson gave regional, social and stylistic variation a dictionary presence that had not been seen before, and he left a message that all would-be lexicographers should bear in mind when wondering whether to engage in collecting the lexicon of a lesser-known dialect. In Chapter 20 of Boswell's Life, we find the following report:

He advised me to complete a Dictionary of words peculiar to Scotland... 'By collecting those of your country, you will do a useful thing towards the history of the language.' He bade me also go on with collections which I was making upon the antiquities of Scotland. 'Make a large book - a folio.' BOSWELL: 'But of what use will it be, sir?' JOHNSON: 'Never mind the use; do it.' In 1755, after much personal lobbying, Johnson received an honorary MA from the University of Oxford. The doctorate he received 20 years later required no special pleading. It would be a century before a comparable attempt would be made to capture the language in its entirety, in the work that eventually became the Oxford English Dictionary. Johnson's great achievement was acknowledged by its first editors, who adopted many of his definitions without change. Johnson’s MA was rushed through as the Dictionary was being printed. It arrived just in time for him to mention it on his title page.

More articles on Language and ideas