Popular politics in the 18th century

Caricatures capturing public opinion and riots on the streets; in this article Matthew White discusses how the majority of Georgians, who didn’t have the right to vote, engaged in politics and expressed their grievances.

Throughout the Georgian period the political rights of ordinary men and women were extremely limited. Only those men with substantial property or wealth were entitled to vote – this amounted to around 200,000 individuals, which was only a tiny fraction of the population. Many Members of Parliament were elected to represent ‘rotten boroughs’ – these were boroughs in which just a handful of voters enjoyed totally disproportionate representation in Parliament. Many large towns such as Manchester, on the other hand, which were expanding quickly as a result of migration and industrialisation, had no representation at Westminster at all until the passing of the first Reform Act in 1832.

Bribery and debauchery at a Whig electioneering banquet, in Hogarth's An Election Entertainment, 1755 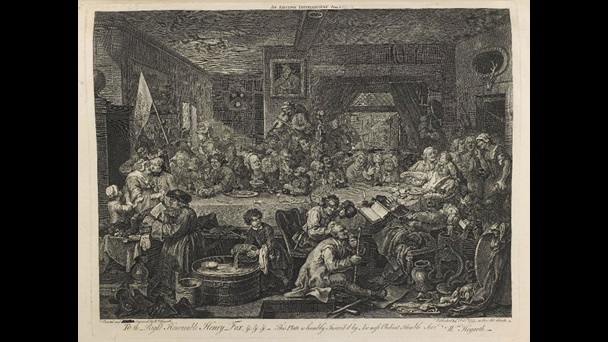 This image depicts the violence, gluttony and bribery of an election banquet among supporters of the Whig party.

Although the majority of the British population had no right to vote, the influence of public opinion was extremely strong. The will of the people was expressed in many different ways. The leading political factions of the period – the Whigs and the Tories – were endlessly bullied and ridiculed in print, for example, and, like today, reputations could rise and fall quickly according to public opinion. Most politicians were satirised mercilessly in cartoons by leading artists such as James Gillray and Thomas Rowlandson, and there was a huge market for political pamphlets, books, ballads and newspapers. 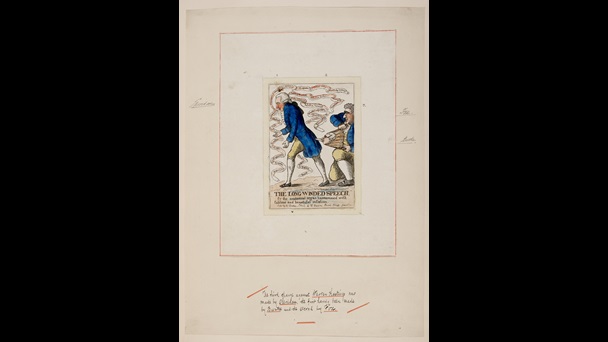 Sheridan was renowned for his length and well-delivered speeches.

A satirical cartoon showing the wealth made from colonial rule in India, 1788 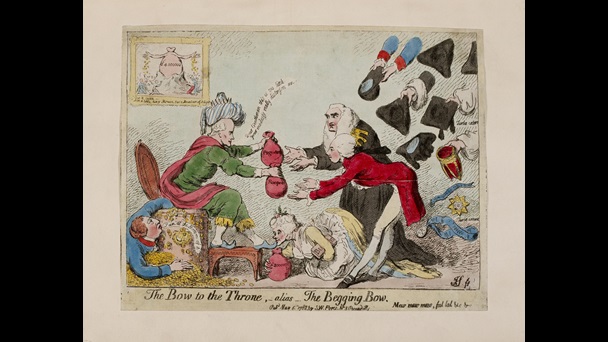 Here Gillray demonstrates his skill in satire as he lampoons Warren Hastings, the governor of Bengal, whose extrication of finances from Indian rulers in order to enrich the British Government later led to his impeachment by parliament for corruption.

Political opinion was also expressed in a more direct manner. Rioting was a familiar feature of daily life in both towns and the countryside, and many people came to fear the power of the ‘mob’. Crowd action was particularly strong in London, where people regularly threw stones at the carriages of leading politicians or booed unpopular ministers. Crowds sometimes forced householders to light their windows in celebration of political or military victories, and massive mobs formed around their political heroes. In 1780, after the government had passed legislation giving more political rights to Catholics, thousands of people rioted for a week in London in protest. Catholics were attacked, and Catholic property smashed up. All of London’s major prisons were burnt to the ground, and the Bank of England came under attack. King George III was forced to call in the Army in order to restore order, and over 200 people were killed in the ensuing violence. The incident became known as the Gordon Riots.

Newspaper report of the Gordon riots, 1780 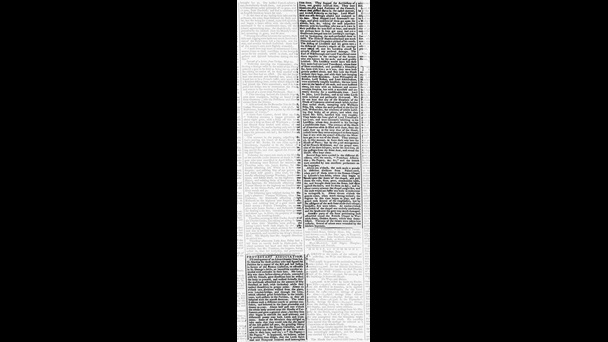 The Gordon Riots of June 1780 are considered by some historians to be the closest Britain has ever come to a full-blown revolution.

Military map showing the areas in which troops were deployed during the Gordon riots, 1780 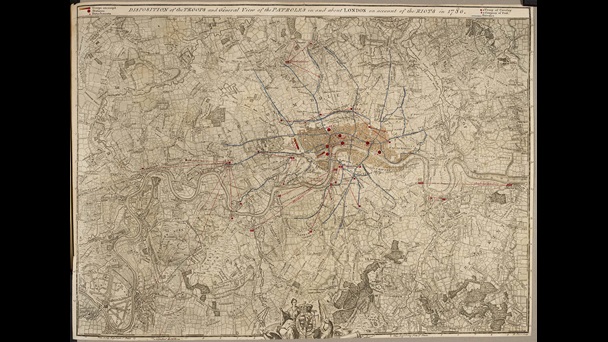 Riots over the rising cost of food also occurred regularly. In 1766 rising grain prices caused rioting across the British countryside. In Wiltshire food stores were looted, and over 3,000 troops were called in to disperse the crowds. Rioting and disturbances also frequently occurred during industrial disputes or strikes. In the 1760s, for example, hundreds of silk weavers in London rioted over foreign competition and the unemployment caused by the use of new weaving technology. One of the consequences of rapid industrialisation during the Georgian period was a rise in popular protest at the human cost of economic change.

A major question is why Britain did not experience a political revolution, similar to those which took place elsewhere in Europe. Rioting and protest against the Establishment was certainly serious in Britain in the late 1700s, but it never resulted in fundamental upheaval. An answer can perhaps be found in the fact that the relationships between different social classes were mainly stable. The working classes remained the backbone of the industrial revolution, and their rights and customs were usually recognised by those in power. By the 1790s many working-class protests were also channelled through more formal political organisations that proved highly effective in bringing about political change by peaceful means.

The French Revolution of 1789 had serious consequences in Britain. News of events across the Channel initially caused much sympathetic interest, and prompted many political radicals to agitate for Britain’s own political reforms. For others, however, the French Revolution represented a grave political danger. It was the cause of much concern in the British government and illustrated the potentially serious consequences of social unrest at home.

Newspaper account of the outbreak of the French Revolution This contemporary article shows that there were mixed reactions to the news of the French revolution.

The situation in France resulted in a range of measures passed in Britain during the 1790s that were designed to restrict political protest. This was a period of great repression in the country that has been described as Prime Minister William Pitt’s ‘Reign of Terror’. A series of legal measures were implemented to restrict the activities of political radicals, including the restriction of political meetings, the banning of allegedly treasonable publications and the extensive use of spies and informers. At the same time, large loyalist associations were formed throughout the country pledging allegiance to the Crown.

'Death of the French King' from the London Packet 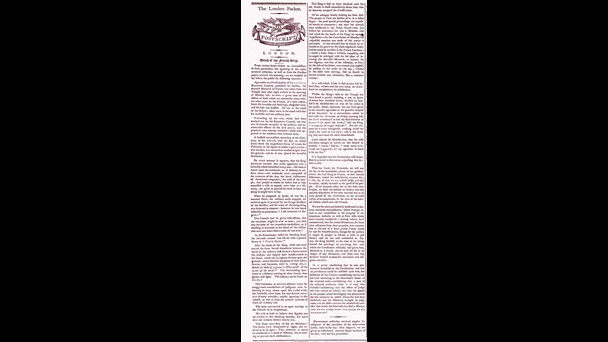 The success of the French Revolution, described here, caused increasing consternation among the British Whig government.

In 1793, Britain – in coalition with other European states – was drawn into war with France. For most of the following 22 years Britain was in an almost constant state of war, resulting in severe strains on her national economy. A threat of invasion by French forces in the south created a sense of panic throughout the nation and was responsible for a wave of anti-French sentiment sweeping the country. In villages and towns up and down the country thousands of men were called to arms, and dozens of amateur volunteer forces were formed. By the end of the century nearly 400,000 men were in readiness for an imminent French invasion – more than twice the size of the standing Army. These impressive lines of national defence would remain in place until Napoleon’s eventual defeat in 1815. Huge armies of amateur volunteers came together to create a defense force against threat of French invasion. They were encouraged by pamphlets such as this one.

More articles on Politics and religion