An introduction to ‘Ode on a Grecian Urn’: time, mortality and beauty

‘Ode on a Grecian Urn’ is one of the five great odes Keats composed in the summer and autumn of 1819. It was first published in July that year, in a journal called Annals of the Fine Arts, and subsequently in Keats’s third and final publication, Lamia, Isabella, The Eve of St Agnes, and Other Poems (1820). The poem bears similarities to the ‘Ode to a Nightingale’ (which was probably written slightly earlier) in its exploration of the relationship between imagined beauty and the harsh, changeable reality of everyday human experience.

Urns were used in ancient Greece to hold the ashes of the dead. Keats does not describe a specific urn in his ode, but he knew Greek art from engravings, and experienced it at first-hand on visits to the British Museum, which had recently taken possession of the Elgin Marbles. His friend the artist Benjamin Robert Haydon had taken him to see the marbles in March 1817 and Keats had responded with two sonnets, published in the Annals in April 1818. Greek sculptures were admired for their formal perfection and ideal beauty, by which, wrote William Hazlitt in his essay ‘On Gusto’, ‘they are raised above the frailties of pain or passion’.[1]

Manuscript of ‘Ode on a Grecian Urn’ by John Keats 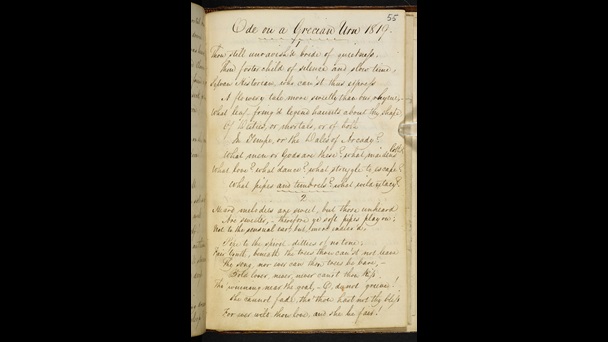 ‘Ode on a Grecian Urn’ from a manuscript copy believed to be in the hand of George Keats, the poet's brother.

‘Foster-child of silence and slow time’

In the ‘Ode to a Nightingale’ immortality is glimpsed in the bird’s effortless song; in the ‘Ode on a Grecian Urn’ it is to be found in the stillness and silence of classical sculpture. Keats praises the urn as a ‘foster-child of silence and slow time’, a ‘Sylvan historian’ whose pictorial narratives are sweeter than words:

Heard melodies are sweet, but those unheard
Are sweeter; therefore, ye soft pipes, play on;
Not to the sensual ear, but, more endear’d,
Pipe to the spirit ditties of no tone:

Where are the places the urn depicts? asks Keats. Who are the people? What are the legends and passions it narrates? He then describes, rather vaguely, what he sees. In one scene there is a lover and a maiden in a grove of trees, and a piper (‘happy melodist’); another shows a crowd on its way to a ritual sacrifice, and a ‘mysterious priest’ leading a heifer to an altar. Keats’s descriptions are richly ambivalent. The silent scenes are timeless, and speak, unchanged, across generations, and that stasis protects the subjects of the urn from the impermanence of human life:

All breathing human passion far above,
That leaves a heart high-sorrowful and cloy’d,
A burning forehead, and a parching tongue.

For this very reason, however, they are prevented from achieving the joyful consummation that is also a part of human experience. The trees may never lose their leaves, but they are forever caught in spring, and so will never come to their full, summer fruition. The maiden will never elude the pursuing lover and his love will never fade, but he will never reach her: ‘never, never canst thou kiss, /Though winning near the goal’. The scenes depicted on the urn exist outside time, but this separates them from humanity.

A turning point in the poem comes when Keats imagines the ‘little town by river or sea shore’ that has been emptied of its inhabitants due to the sacrifice. Its empty streets will always be silent and still; and here the silence is a kind of loss, and the stillness is not the formal perfection admired by Keats at the beginning of the poem, but a kind of desolation. Just as ‘Ode to a Nightingale’ turns on the word ‘forlorn’, so here the poem turns on the word ‘desolate’:

And, little town, thy streets for evermore
Will silent be; and not a soul to tell
What thou art desolate, can e’er return

In the final stanza the urn is both friend and stranger. Its ‘silent form, dost tease us out of thought’, providing a relief from the feverous activities of the brain. Unchangeable, it will provide friendly relief to future generations afflicted by different sorrows. Its pastoral delights are not, however, warm and human, but cold.

There is some uncertainty about the poem’s famous conclusion:

‘Beauty is truth, truth beauty,’ – that is all
Ye know on earth, and all ye need to know.

Is the ‘ye’ of the final line the urn itself, or the viewer, representing humanity? It is not altogether clear, but Keats had equated truth with beauty more than once in his letters. ‘What the imagination seizes as Beauty must be truth’, he wrote to his friend Benjamin Bailey in November 1817, ‘whether it existed before or not … The Imagination may be compared to Adam’s dream – he awoke and found it truth’ (22 November). ‘[O]n my word I have thought so little that I have not one opinion upon any thing except in matters of taste’, he told his brother and sister in law in December the following year, ‘I never can feel certain of any truth but from a clear perception of its Beauty’ (31 December, 1818).

The ending of ‘Ode on a Grecian Urn’ may be ambiguous, but this is in keeping with the ambiguity that pervades the whole poem; and, like Keats’s other odes, it is a poem notable not for the answers which it may or may not present, but for the skill and intensity with which it asks the questions. ‘It is a wonderful picture’, said Keats of Benjamin West’s painting ‘Death on the Pale Horse’, which he saw in December 1817. ‘But there is nothing to be intense upon; no women one feels mad to kiss; no face swelling into reality. The excellence of every Art is its intensity, capable of making all disagreeables evaporate, from their being in close relationship with Beauty & Truth’ (22 December, 1817).