Like most of his great contemporaries, Anthony Trollope used every device available to maximise his exposure in the literary marketplace. In his day, this meant publishing novels as serials, either in magazines or newspapers, or in 20 separate parts, each sold with full-page illustrations and stapled into a soft paper cover with a few pages of advertisements, and ready to be bound together into two or three volumes when serialization came to an end. At his most popular, in the 1860s, Trollope dominated the literary scene as far as the prosperous middle-classes were concerned. Readers thought and wrote about his characters almost as though they were real people, and his was the picture of the life of the professional and landed classes which people recognised and believed in. Women even had dresses made in imitation of what one of his characters wore. Charles Dickens, it is true, consistently sold more copies, having more readers from less well-off households. One might say that everyone who read Trollope also read Dickens, but that not all readers of Dickens were Trollope fans. 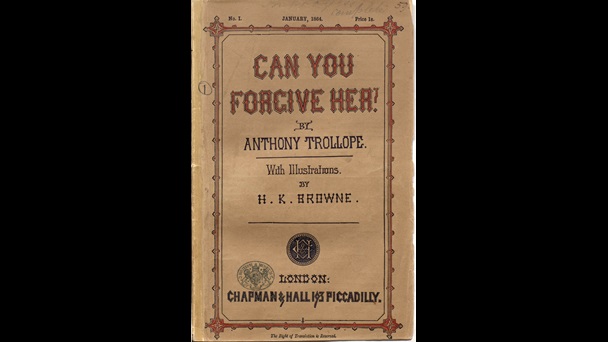 Front cover for the first instalment of Can You Forgive Her? by Anthony Trollope, January 1864. The novel was originally published in serialised parts.

Trollope specialised in the world of the middle and upper classes, and the stories which interested him most concerned the efforts of individuals to behave morally in a world which was changing rapidly, in which fortunes were made and lost, marriages were made for love or for money, or in the best instances, both. It is the world of Jane Austen brought up to date into the world of railways, steamships, telegraphs, electoral reform, arguments for the rights of women and for the political representation of the working men (still ‘men’ and rarely ‘men and women’). Life was more hectic. Even in rural life there were trains taking people to London every day, and bringing London fashions, London money, London crime and London thinking down into the countryside. Even in the Church of England, which played a huge role in the social and economic as well as the religious life of the nation, new ideas, social and political ambition and the pursuit of wealth were daily more apparent. The ancient buildings of the cathedral cities were taken over by forces centred in London.

Living morally in a wicked world

In such a world it took strength to act in such a way as to live a moral but effective life. Trollope’s novels are amusing, immensely engaging and frequently moving, but at their core there is always the age-old problem of how to lead a good life in a dangerous and possibly wicked world. So all Trollope’s characters have highly developed consciences, not in a strictly religious sense, but in the sense of a self-awareness. They constantly question whether, in choosing to do the best things for themselves, they can also manage to do good things for their families, their neighbours, and their fellow humans as a whole, including perhaps their enemies too. Young women and young men long for a marriage which will satisfy the contradictory desires for romance, sexual attraction, prosperity and social respectability. (Yes, Trollope’s characters, though not using today’s open language about sex, have powerful sexual urges in their love relationships).

The illustrations to Trollope’s novels support all the aspects of the fiction described above. His best illustrator was the eminent painter, John Everett Millais, whose outlook on the world was broadly the same as the author’s. They became great friends, holidayed together and went fox-hunting together. Millais’s drawing style and the skillful wood-engraving of the firm of Dalziel Brothers, made these illustrations collectable from an early date. There is a dress so fashionable in one of Millais’s images to Framley Parsonage (1860–61) that it actually set off a fashion instead of merely following it.

Framley Parsonage by Trollope, with illustrations by Millais 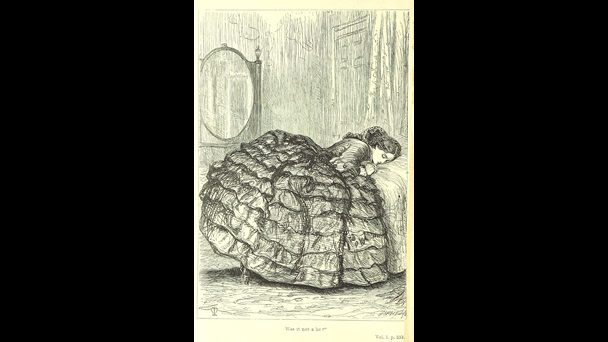 John Everett Millais's illustration of Lucy Robarts depicts her in an extraordinarily fashionable dress. From Framley Parsonage by Anthony Trollope,1861.

In Orley Farm Trollope and Millais together create the perfect example of how an old manor house should look in order to express that an ‘old’ family lives there, and moreover they set it in the county’s social life, Millais going so far as to locate the viewer of his plate as a appreciative on-looker. In the same novel, in contrast, there is a unique picture of a salesman of folding cast-iron furniture showing off his wares, wares that might also be seen simply as things in the advertisements accompanying the parts of the novel, and which author and artist have animated as part of contemporary life. 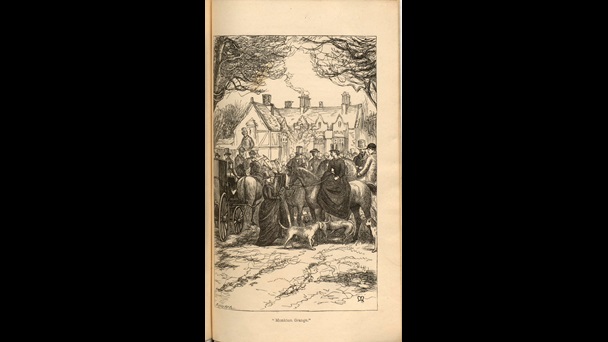 John Everett Millais's illustration of Monkton Grange depicts the old manor house in the background, foregrounded by a group of people gathering for the Hanworth Hunt. From Orley Farm by Anthony Trollope, 1862. 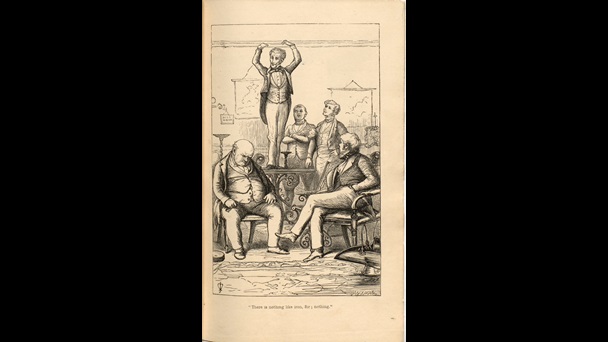 John Everett Millais's illustration of a travelling salesman of cast-iron furniture depicts him demonstrating the strength of his wares by standing on a table. From Orley Farm, 1862.

The art of doing much with very little

In the same novel there is a plate which portrays the subtle interaction of people’s words and actions in the very formal context of Victorian life. Author and artist together have created a moment in which slowly moving characters, uttering no more than quite conventional words, becomes unstable, uncertain, leading we know not where. Mrs Furnival, a solicitor’s wife, is worried that her husband may be improperly involved with his beautiful client, Lady Mason, and has intruded on them, as though accidentally. For quite unromantic reasons, Lady Mason has felt the need to conceal her visit to her solicitor, and so has told her son that she is going shopping. Hence the economical caption, ‘your son, Lucius, did say shopping …’. This is the art of doing much with very slight means. The suspense created is out of all proportion to the means used, and the whole is expressive of a degree of uncertainty difficult to capture in visual art. 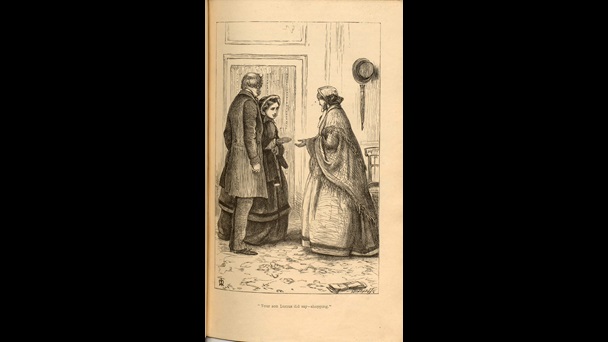 In this illustration of Mr and Mrs Furnival and Lady Mason, John Everett Millais draws on his skills of composition to create tension and suspense. From Orley Farm, 1862.

In The Small House at Allington (1862–63), a group of men return from shooting, having bagged nothing. They are crest-fallen as they are greeted by Squire Dale on his doorstep, and Lilly Dale, standing veiled at the back of the group with her sister, mocks them by the remark which is the caption: ‘It’s all the fault of the naughty birds.’ Unusually, female perception of male characters has belittled them. This image, quiet though it is, is a striking and quite unusual (almost transgressive) assertion of the female gaze in Victorian illustration.

At their best, Trollope and Millais show just what impressive effects word and image can create when working together in the medium of the illustrated novel.

Millais's illustrations for The Small House at Allington by Trollope 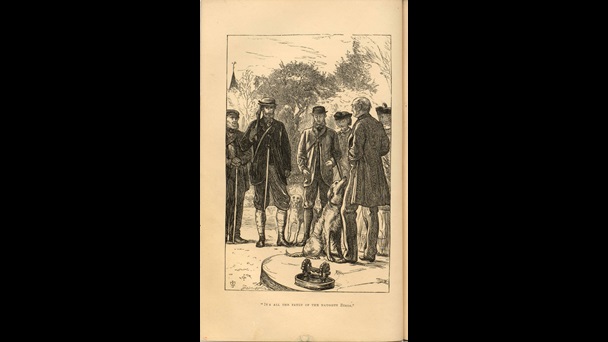 John Everett Millais's illustration of a group of men returning from shooting, from The Small House at Allington, 1864.