Paul Schlicke considers the contrast between fact and fancy in Hard Times, exploring how Dickens uses the excitement of the circus to challenge the doctrines of 19th-century philosophers and political economists.

Charles Dickens (1812–1870) took lifelong delight in the amusements of ordinary people, and from the outset of his career he defended their right to leisure and recreation. He insisted upon the basic decency of working men and women in their leisure activities, maintaining that in pursuing their pleasures ‘nothing but good humour and hilarity prevail’. He criticised ‘the iron-hearted man who would deprive such people as these of their only pleasures’.[1] The stated intention of his writing and performing was to promote ‘the capacity of being easily pleased with what is meant to please us’.[2] ‘Whatever be the class, or whatever the recreation, so long as it does not render a man absurd in himself, or offensive to others, we hope it will never be interfered with’.[3]

Hard Times is perhaps Dickens’s most polemical novel, contrasting what he saw as the errors of hard-headed rationalism with values represented by the daughter of a circus clown. ‘I entertain a weak idea,’ he wrote, ‘that the English people are as hard-worked as any people upon whom the sun shines. I acknowledge this ridiculous idiosyncrasy, as a reason why I would give them a little more play’ (Book 1, ch. 10). 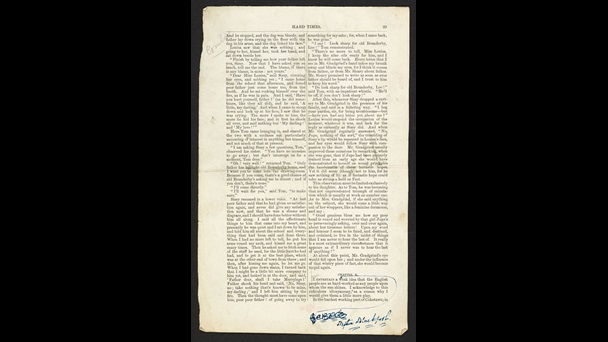 The story opens in a schoolroom, where the pupils are being indoctrinated in Mr Gradgrind’s philosophy of Fact. Dickens illustrates two intensely contrasting reactions to this: the rote learning of Bitzer, the model pupil; and the confusion of Sissy, who is incapable of turning the knowledge gained through real life into a fixed, ‘factual’ definition.

The scene satirises two popular schools of thought of the day. Utilitarianism, the philosophy of Jeremy Bentham, taught that human nature was motivated by self-interest, and it was the duty of the state, through education and extension of the franchise, to support and encourage each individual to pursue his or her own interest. Political Economy, on the other hand, considered national prosperity dependent on unchanging economic laws, according to which the individual self-interest of employers promoted the general welfare. Raising the wages of workers, the followers of Adam Smith and David Ricardo taught, would cut into the profits of industrialists and thereby jeopardise national prosperity. The proper role for the state was one of laissez-faire, to enable the process to operate freely.

These ideas which, it could be argued, made genuine contributions to social progress in 19th-century England, differed considerably both in theory and in practice, but for Dickens their conceptions of man and society were equally destructive. Their trust in economic forces and their reliance on statistical evidence failed to take account of noble human qualities such as generosity, altruism, and imaginative sympathy. Their concern with quantitative analysis made them insensitive to the real lives of individuals, and their high-minded notions of general prosperity, he believed, promoted selfishness. The ‘utterly sensual and careless’ nihilism of James Harthouse, Dickens observed in his notes for the novel, amounted to ‘very much the same thing in the end as the Gradgrind school’.

The circus: delight and wonder

Thomas Gradgrind’s daughter Louisa, raised on a regimen of Fact, instinctively recognises that something is missing from her life, and it is Sissy, resistant though she is to abstract reasoning, who supplies what is absent. Dickens’s interest was not in dramatising the circus – although the description of acts and the dialect are authentic. Rather, the circus provides a window on to values which he held passionately. This is clear from the fact that it is Sissy, not a performer at all, who embodies those values: unhesitating love for others, openness to experience, trust, and firmness in standing up for what is right. In an earlier depiction of the circus (in The Old Curiosity Shop) Dickens similarly diverted attention from the performers onto the spectators, showing how Kit and Barbara find shared enjoyment, delight and wonder, lifting them out of their everyday lives into a world of colour and excitement, and nurturing the bonds of affection between them. The circus appeals to their curiosity, caters to their willingness to be entertained, and stimulates their inherent affection for one another. In both novels, the circus promotes gregariousness, escape, expansion of borders between what is real and what is imaginary and above all fellow-feeling. Where other novelists focus on individual moral development, as attained through introspection and self-reflection, Dickens emphasises instead social values, above all the Christian commandment to love one’s neighbour as one’s self. 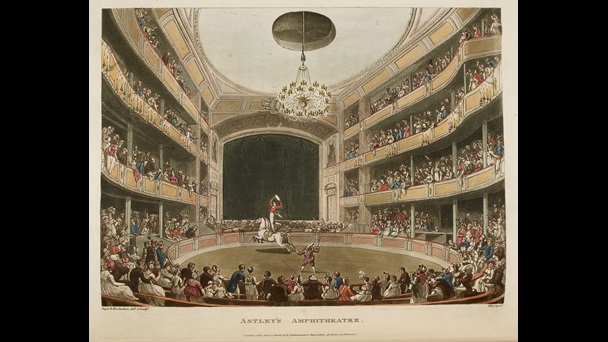 This illustration of Astley's circus depicts a packed crowd watching the famous horse show. From Microcosm of London, 1808-10.

In Hard Times this leads Dickens to condemn not only the selfish bluster of Bounderby and the denial of the truth of the heart in Gradgrind, but also the divisiveness promoted by Slackbridge: for Dickens, industrial relations, as well as all individual human relations, are not furthered by confrontation and pursuit of self-interest but by seeking out shared interests and needs.

It is a strength of the novel that Dickens presents these matters not as abstract ideas to be pondered rationally, but as self-evident truths captured imaginatively, through feeling rather than reason. Imagery depicts Coketown as a grotesque mutant of the circus, with its melancholy mad elephants, erupting from the suppression of imagination. Dickens uses metaphor most tellingly, in the great scene in which Gradgrind presents Bounderby’s proposal of marriage to his daughter:

‘Are you consulting the chimneys of the Coketown works, Louisa?’

‘There seems to be nothing there but languid and monotonous smoke. Yet when the night comes, Fire bursts out, father!’ she answered, turning quickly.

Louisa’s cry that ‘fire bursts out’, makes sense not as literal utilitarian fact but only as metaphorical, imaginative truth, a point which Dickens underlines by noting that Mr Gradgrind does not understand the relevance of the remark, which can only be grasped – by us as readers, as well as by Mr Gradgrind – by means of circus values.