In News from Nowhere, William Morris imagines a utopian future in which money, ‘wage slavery’ and marriage have been abolished. Dr Marcus Waithe explores the origins of this iconic socialist work.

Transplanted into the future

William Morris's News from Nowhere (1890) takes its hero, William Guest, on a journey into the future. After returning home from an acrimonious socialist meeting, Guest goes to bed in an unsettled state, his mood worsened by the 'vapour-bath' of his commute on the underground railway (ch. 1). On waking, he notices that the industrial din of the Hammersmith riverside has subsided. A walk outside convinces him that he has been transplanted into a beautified city of the future. Guest gradually learns that money has been abolished, that craftwork has pushed aside 'wage slavery', that contracts of marriage have been replaced by flexible bonds of affection, and that Parliamentary democracy has given way to informal patterns of co-operation .

Later in the narrative, Guest is enrolled on a secondary journey. This time, he travels up-river, between Hammersmith and a place that strongly resembles Kelmscott Manor, the summer residence that Morris owned in the Cotswolds. By now, he is feeling ecstatically happy. But just as the prospect of lasting contentment dawns, he loses his footing in the future, and he finds himself back in the 19th century. Devastated at first, Guest gradually accepts that turning his personal 'dream' into a collective 'vision' will require work and organisation, and that these efforts have to take place in the old world (ch. 32). Morris's utopia resists the compensation of a quick solution, in other words. Happiness is glimpsed, but there are definite strings attached. 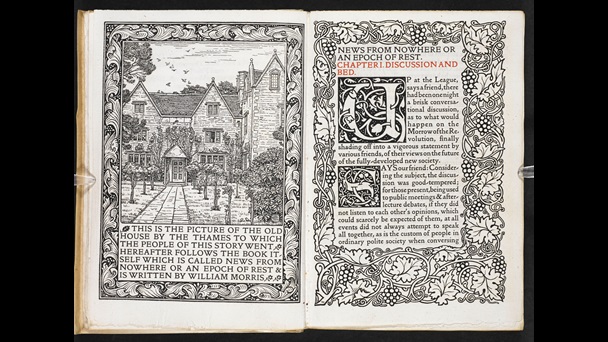 1892 Kelmscott Press edition of News from Nowhere, with a woodcut of Kelmscott Manor, Morris’s summer house in the Cotswolds.

Original publication in Commonweal, the newspaper of the Socialist League

This unwillingness to offer readers a finished vision also affects the book's form. The fixity we expect of novels packaged as 'classics' tends to unravel as soon as we appreciate the effect of serial publication on their original audience. Morris's utopian romance is no exception, but it takes textual instability to unusual extremes. In its first incarnation, News from Nowhere appeared as instalments in Commonweal, the official newspaper of the Socialist League. Morris crossed 'the river of fire' to socialism on joining the Social Democratic Federation in 1881, and he helped form the League in 1884. As his diaries indicate, Morris not only edited Commonweal, but spent many hours preaching socialism at meeting houses, and in the open air. News from Nowhere was always more than ephemeral propaganda, but it was printed on pages handed out in this campaigning context. The narrative contains many 'in jokes' aimed at rival factions in the League. It also pokes fun at his own tendency to lose his temper. In short, it is a story that speaks first and foremost to a readership of friends, comrades, and rivals.

Connections to news of political protest

Connections to the raw 'news' of political protest jump out from the original sheets of Commonweal, where reports on strikes and demonstrations jockey for space with Morris's unfolding dream of the future. Some of these events made their way into the structure of News from Nowhere. An historical section called 'How the Change Came' re-imagines the 'phoney war' between police and protestors, described in Morris's diary as 'the Siege of the Butcher's Shop' (ch. 17). When Guest is shown Trafalgar Square, a 'strange sensation' comes over him as he 'remembers' the violent clashes Morris witnessed on 'Bloody Sunday' in 1887 (ch. 7).

'The Riots in London on Sunday' from the Illustrated London News 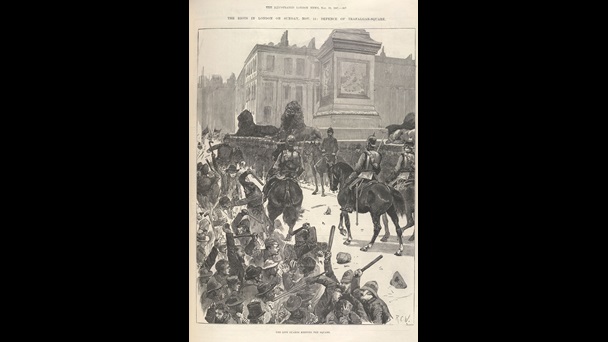 Picture in the Illustrated London News, showing the riot in Trafalgar Square in November 1887.

Even Guest's placid journey up the Thames mimics a real family expedition, as recounted by Morris in his desk diary. This relationship with actual events makes the descriptive detail unusually time-sensitive. In the serial edition, Guest is entertained by his hosts in a 'Guest-hall', which bears an inscription commemorating the work of the Socialist League. By the time News from Nowhere appeared as a book (Reeves & Turner, 1891), the wording had changed to read 'The Hammersmith Socialists', reflecting the fact that Morris abandoned the Socialist League to found his own party in 1890 (ch. 3). The book edition even incorporates 'feedback' from its serial readers: in response to complaints that Morris had forgotten his proto-feminist comrades, he included a chapter about a head stonemason named Philippa.

From newspaper to fine paper

While most serial novels reached their final form between plain covers, News from Nowhere experienced one further textual revolution. In 1892, it was republished by Morris's art-printing venture, the Kelmscott Press. A text originally set in disposable newspaper print was now impressed on fine paper in the profoundest black ink, with marginal comments in luxuriant red, all bound in the best quality vellum. Even so, it continued to bear witness to previous incarnations. Haunted by all the 'old news' worked through the structure of the text, its artistic finish couldn't hide the inconsistencies and 'rough edges' caused by Morris's hurry to compose as the deadlines for copy loomed.