Sexuality and desire in Tess of the D’Urbervilles

Margaret R Higonnet considers how Thomas Hardy uses the character of Tess to complicate conventional ideas of modesty and desire.

When we first meet Thomas Hardy’s heroine Tess, she is dressed in white, with a red ribbon in her hair, engaged in ‘clubwalking’, an ancient fertility ritual or ‘Cerealia’, in which maidens of all kinds, young and old, carry phallic peeled willow-wands to the green where they dance. Primordial seasonal rituals tie Tess to the land and to classical myths both of chastity (Artemis) and of abduction to Hades (Persephone). Tess’s ambiguous qualities, at once seductive and modest, echo those of the Vale of Blackmoor, which is ‘fertile and sheltered’ (ch. 2). As her future husband Angel Clare passes by, he notes that Tess combines childhood and womanliness, ‘large innocent eyes’ and a mobile, ‘pouted-up deep red mouth’ that resembles a peony. The ambiguities of Tess’s situation at the outset – virginal yet about to be marketed by her mother, in order to save the family from indigence – are captured by the effect of her gauzy dress and hairdo, which lend a ‘luxuriance of aspect, a fulness of growth, which made her appear more of a woman than she really was’ (ch. 5). 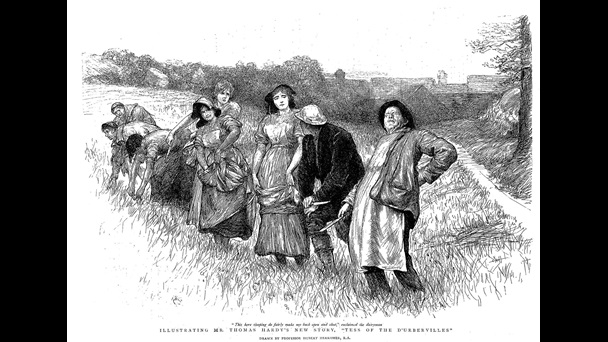 Hubert Herkomer’s illustration for Hardy’s Tess of the D’Urbervilles published in the Graphic newspaper, 1891.

Hardy lingers on the transitional status of this heroine in whose eyes or smile one might glimpse a child of nine or five, yet whose ‘developing figure ... belied her age’ (ch. 7). Hardy may have had in mind Darwin, who noted that physiologically woman ‘comes to maturity at an earlier age than man’[1]; but Hardy resists Darwin’s generalizing binaries, as he presents to us a girl who is also more mature than her parents, and more philosophic than her scholar husband. Tess’s placement in a sexual marketplace may not have surprised readers who had read in Elizabeth Barrett Browning’s Aurora Leigh (1854) about the country girl Marian Erle, whose mother similarly tried to sell her, and who was later drugged and raped. Indeed, the public had rallied to change the age of consent after publication of William T Stead’s exposé of child prostitution in London, ‘The Maiden Tribute of Modern Babylon’.[2] But editors of family magazines for ‘household reading’ were ‘prudes’, as Hardy complained in an essay on ‘Candour in English Fiction’ (1890), where he argued that ‘Life being a physiological fact’, conscientious and honest fiction should portray ‘the relations of the sexes’.[3]

As Hardy expected, even before Tess of the D’Urbervilles (1891) was published, his figure of a sexualised young girl provoked scandal about its ‘improper explicitness’[4] and an objection to the excessive ‘succulence’ both of his heroine and of her rural environment. After three editors refused the manuscript, Hardy, who depended on serial publication of his novels for the income, censored it himself, cutting out the Chaseborough episodes in which Tess is carried off and possessed while asleep by her ‘cousin’ Alec, (ch. 11). He stripped away some of its least proper scenes and rewrote sections that might arouse further objections (such as the sublime scene in which she baptises her illegitimate child) before submitting his novel to the weekly Graphic. For the Graphic, Tess tells her mother that she had foolishly ‘married’ Alec before a false registrar. Only after the Graphic returned the serial manuscript, did he restore the 47 omitted leaves, and revise the bowdlerised pages, a process of parturition that he described in his explanatory note as piecing the trunk and limbs together.

For the volume edition of 1891, Hardy added a subtitle in defence of Tess: ‘A Pure Woman Faithfully Presented’. In correspondence, he even declared that she was ‘purer than many a so-called unsullied virgin’.[5] The readers of that version, which he had largely stitched back together, learned that on the evening of a market day near Alec’s estate at Tantridge, Tess accepted his offer to ride home, only to be tricked, drugged, and raped by ‘the hands of the spoiler’.[6] Instead of recounting Alec’s attack on the sleeping Tess, Hardy surrounded the moment with philosophic questions and the fatalistic reflections of country folk: ‘It was to be.’ When Tess returns home several weeks later, the narrator alludes to the serpent image in Shakespeare’s ‘The Rape of Lucrece’, indirectly emphasising the idea of rape rather than seduction. Each time Tess tells her story (to her mother and to Angel), the narrator leaves a blank, inviting the reader to fill in the details; likewise, Angel dismisses Tess’s several efforts to recount ‘my history’ (ch. 30). 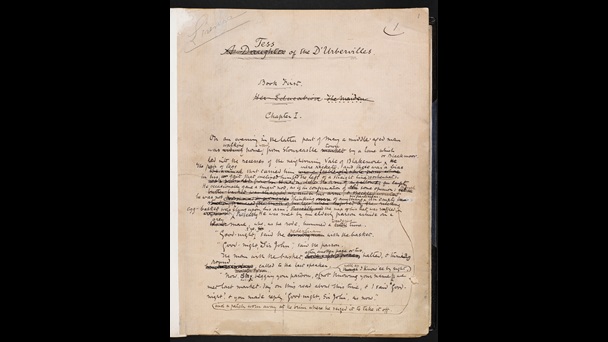 The first page from Hardy’s draft of Tess of the D’Urbervilles (1891), showing the extensive reworkings of the text, and the alteration to the title.

Undercutting these self-censoring precautions, the image of Tess presented through the illustrations in the Graphic directly capitalised on her sensual attractiveness and her intense desire for Angel Clare, who believes her to be ‘the most honest, spotless creature that ever lived’. One image shows her arched in torment, torn between her fear of telling him about her relationship to Alec and her desire to accept his proposal of marriage. Above the suggestive caption, ‘Tess flung herself down upon the undergrowth of rustling spear-grass as upon a bed’, Ernest Johnson’s wood engraving shows her stretched on a hillside, as she clutches her bodice (ch. 28). The scene fuses pleasure with pain, and ‘shoots of joy’ with ‘palpitating misery’. 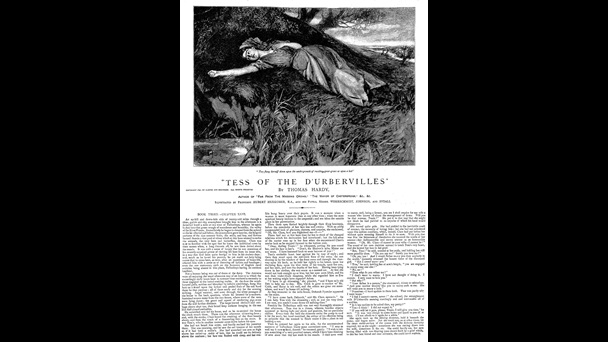 Ernest Johnson’s illustration for Chapter XXVII of Hardy’s Tess of the D’Urbervilles (1891).

Such antitheses resonate throughout the depictions of Tess’s desire for Angel, charging them with the passion of a first love that hangs in suspension, when ‘sex takes the outside place in the presentation’ (ch. 27). The sensual contrasts between life-drives and a death-drive shape one of the most striking scenes in their courtship, when he is playing his second-hand harp in the twilight at the Talbothays dairy farm. In a Gothic version of the Garden of Eden, when his notes strike Tess with a stark ‘nudity’, she is drawn irresistibly to him through the mists of pollen and ‘sticky blights which, though snow-white on the apple-tree trunks, made blood-red stains on her skin’ (ch. 29). Paradoxically, one of the objections to the novel has been that Angel proves himself insufficiently sexual, when he priggishly rejects her on their wedding night, after hearing her story. The Graphic engraving by Hubert Herkomer for that chapter shows Angel sleepwalking: he carries Tess wrapped in a sheet, in an unconscious embrace, as he turns his head away from her, and places her on a coffin (ch. 37). Their idyllic days together at the end of the novel will close at Stonehenge, another primeval setting where this field-woman ‘pure and simple’ will be made to pay. 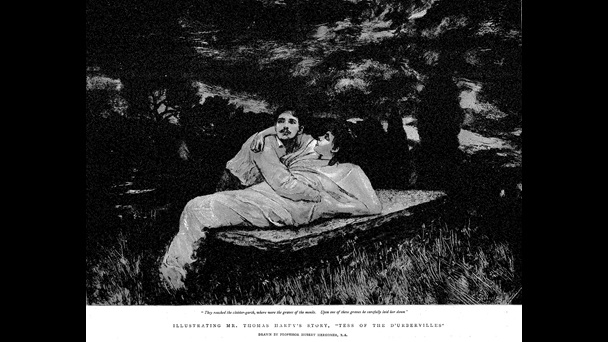 Hubert Herkomer’s illustration for Chapter XXXVI of Hardy’s Tess of the D’Urbervilles (1891).