The ball in the novels of Jane Austen

Professor John Mullan explores the protocol and the passion of balls in Jane Austen’s novels.

In Jane Austen's fiction, as in many novels of the 19th century, a ball is the ultimate occasion for a heady kind of courtship – a trying out of partners that is exciting, flirtatious and downright erotic. Couples perform together, feeling each other’s physical proximity (though both men and women wore gloves throughout) while being watched by others. Many of the dances were physically demanding: a ball might last for six hours or more, and end only as dawn approached (in Sense and Sensibility Marianne is delighted to hear of Willoughby dancing ‘from eight o'clock till four, without once sitting down’ (ch. 9)). In a crowded room lit by candles the heat could be overwhelming. When you are told in Pride and Prejudice that Mr Bingley ‘danced every dance’ at the Meryton assembly ball you should realise that he is a thoroughly vigorous young man (ch. 3). 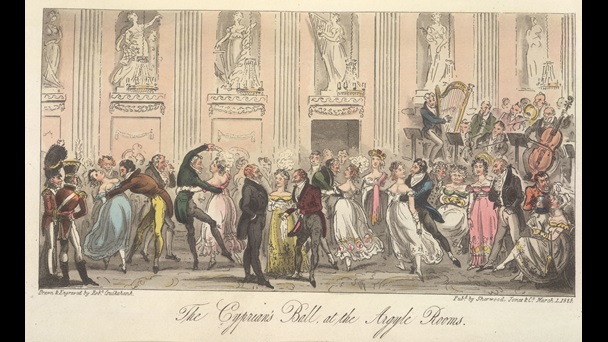 This engraving from The English Spy (1825) shows a lively ball held in London's Argyle Rooms.

In reality, Austen loved balls, which were the most exciting events in provincial life. In her novels, she uses them brilliantly for their combination of propriety and passion. In Pride and Prejudice, the mutual attraction of Elizabeth Bennet and Mr Darcy is established through their behaviour towards each other at a succession of balls. They approach and retreat, tease and repel each other, as in an elaborate dance. At the assembly ball (where anyone who pays for a ticket can take part) Mr Darcy fancies himself above it all. With extraordinary rudeness, he lets Elizabeth overhear his description of her as ‘tolerable; but not handsome enough to tempt me’ (ch. 3). He later tastes his own medicine when he offers himself as Elizabeth’s dance partner at the Lucases and is turned down. Finally, at the Netherfield ball (a grand occasion, entry by invitation only), he suddenly asks for ‘her hand’ and ‘without knowing what she did’ she accepts (ch. 18). ‘Without knowing what she did’ because at the ball Austen shows us Elizabeth’s unconscious interest in Mr Darcy.

Codes of behaviour were exacting. At the Netherfield ball Elizabeth must dance with Mr Collins because if a woman turns down one request for a dance she must turn down all others. Say no to Mr Collins and you must stand out for the whole evening. Elizabeth’s first two dances (the maximum you were allowed with the same partner) are therefore ‘dances of mortification’. Mr Collins, ‘often moving wrong without being aware of it’, gives her ‘all the shame and misery which a disagreeable partner for a couple of dances can give’ (ch. 18). He, of course, thinks that he has done brilliantly, the dance being a preparation for his proposal of marriage the next day.

A Companion to the Ball Room 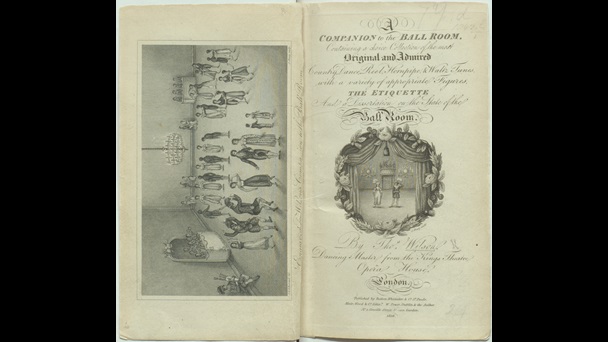 A Companion to the Ballroom, published 1816, taught readers how to dance as well as how to behave properly in the ballroom. 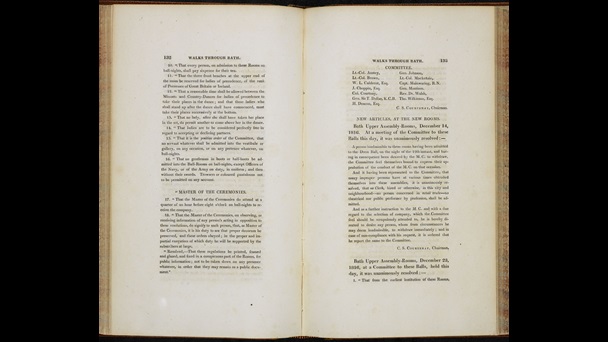 Elizabeth’s mortification is all the greater because she is being watched by those who are not dancing. Spectators will be sizing them up as a couple. At the first ball in the novel Mrs Bennet watches her daughter Jane dancing with Mr Bingley and sees the prospect of a future marriage (rightly, as it turns out). At a ball there were plenty of people who were not dancing but either playing cards in an adjacent room (a proper private ball would have tables laid out for whist) or just watching. In Emma the heroine is distressed to see Mr Knightley ‘among the standers-by’ at the ball at the Crown, ‘with the husbands, and fathers, and whist-players’ (ch. 38). Those who stand by are removed from the sexually charged pleasures of performance. She is later delighted to see him dance with Harriet, and to see that his dancing is ‘extremely good’ (ch. 38). At the end of the chapter we know something really significant is happening when he asks Emma herself to dance – and she accepts.

The complexity of steps and movements

The patterns of steps and movements were often complicated and required a great deal of practice. Books were published to guide would-be dancers. Look at these patterns and you might sympathise with Mr Collins for his incompetence. Even the Bennet girls, whose education was entirely neglected by their mother, would have had lessons. Dancing well was a test, and when Austen's heroines take the floor with the men they love it is in order to perform well together. Dancing is one of the female ‘accomplishments’ that Miss Bingley lists during Elizabeth’s earlier stay at Netherfield (ch. 8). When her fellow dancers at the Netherfield ball see Elizabeth take the floor with Mr Darcy, they are suitably in awe. As she stands opposite him, she reads ‘in her neighbours’ looks’ their ‘amazement’ (ch. 18). They are in awe because of his social status, and because he has chosen to dance with one of the local girls. Some of the other young ladies will also have to come into contact with him as they prance and rotate.

A Description of the Correct Method of Waltzing 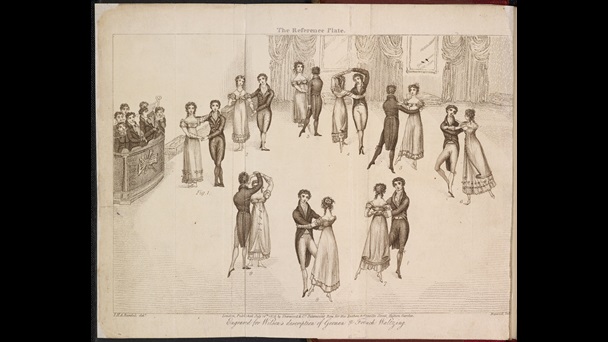 Dancing was among the most important accomplishments for the women, and the men, of polite society. It encompassed not only the steps and figures of social dances but also deportment and etiquette.

An Analysis of Country Dancing 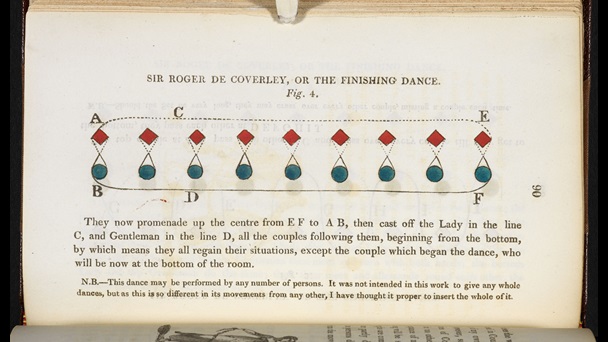 This dancing manual, Analysis of Country Dancing by Thomas Wilson, contains descriptions and diagrams of the steps in a variety of country dances. 1811.

The drama of Austen’s fiction is shaped around the very protocol of the ball. A man can only ask a woman to dance if he has been formally introduced to her. In Northanger Abbey, Henry Tilney gets the Master of Ceremonies, who presides at any public ball, to introduce him to Catherine Morland. He must already have had his eye on her. When he attends the Meryton assembly ball, Mr Darcy declines to be introduced to any woman in the room. He will dance only with the women he already knows, the baleful Bingley sisters. Not only is he too proud to mingle with the vulgar locals, as a rich young man he is also sick of being the target of husband hunters. Talking to your partner

At the balls in Austen's novels, you can talk during dances, especially those that require some partners to wait while others perform. In Mansfield Park, we can feel the anticlimax when Fanny finally gets to dance with Edmund, the man she loves, and he tells her that he does not want to talk. ‘“You will not want to be talked to. Let us have the luxury of silence’". In Pride and Prejudice, when Elizabeth Bennet and Mr Darcy do eventually dance together they also have their most erotically charged conversation, a kind of verbal fencing match. It is a verbal intimacy to parallel their physical closeness. In the crowded room, everything seems to narrow to these two people. Once these two have danced together, they are destined for each other. Anyone in that ballroom should have been able to see it, even if they did not see it themselves. 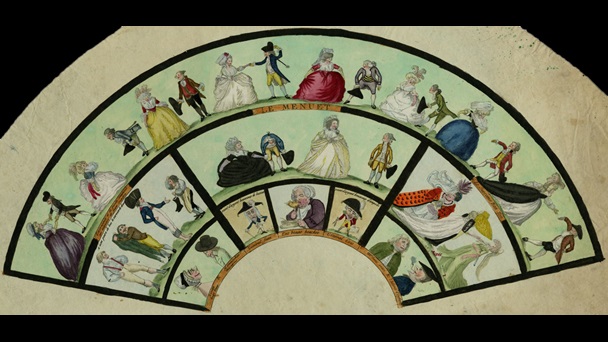 The minuet was without doubt the most important couple dance of the 18th century. The terror it inspired in would-be dancers made it a ready object of satire.