‘The Charge of the Light Brigade’: making poetry from war

Dr Seamus Perry explains how Tennyson transformed a catastrophic episode in the Crimean war into one of the 19th-century’s most successful poems, using rhythm, repetition and vocabulary to convey both the folly of the cavalry charge and the bravery of the soldiers.

On 25 October 1854, as part of the Battle of Balaklava, an episode in the Crimean War, the Light Cavalry Brigade of the British Army made a disastrous frontal assault upon a well-positioned battery of Russian artillery. The British soldiers rode the mile’s length of a valley, vulnerable to heavy enemy fire on both sides as well as from the front. Despite losses, they reached the Russian forces and, using sabres, drove them from their position, before turning to ride back down the long valley, exposed once again to insistent cannon fire. About 670 men had begun the charge, of whom 118 were killed and 127 wounded: by the end of the episode, only 195 men were left with horses.

It was a complete military disaster, the awfulness of which was only compounded by it being the result of a misunderstanding. The order had been given to capture some heavy guns that the Russians were attempting to withdraw from the hills to the south of the valley; but when Captain Nolan brought the order back to the brigade its precision had somehow got lost, and the charge was launched instead at the substantial artillery dug in at the valley’s far end – a task for which the lightly armoured brigade was suicidally unsuited. Nolan may have realised that a mistake had been made as his first action upon charging was, extraordinarily, to ride to the front of the company, before his senior officer; but if this was indeed an attempt to get the men to change direction it was futile: he was shortly killed by Russian artillery, and so the cavalry rode on.

William Simpson's illustration of the Charge of Light Brigade 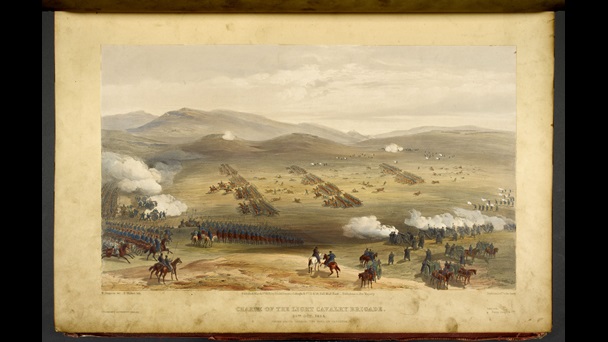 An artist’s impression of the charge of the Light Cavalry Brigade at Balaklava, 1855.

Edward Morin's illustration of the Charge of the Light Brigade 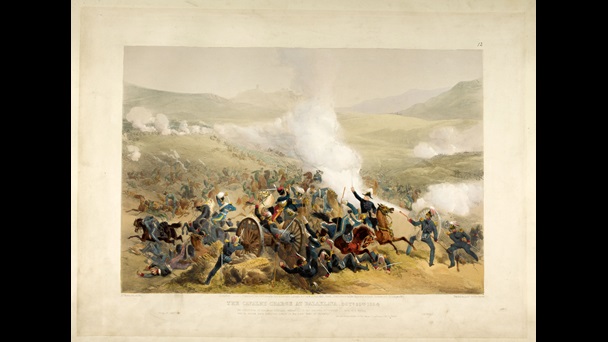 An artist’s impression of close combat between the Light Cavalry Brigade and Russian troops at Balaklava, 1854.

Reports of the Charge

Terrible mistakes happen in war all the time, of course, but this one had an unprecedented sort of publicity as the Crimean War was the first to be covered by photographers and reporters, who sent news home within just a few weeks. It was the first campaign to be covered by a war correspondent, the Irishman W H Russell, who was dispatched by The Times, where his compelling account of the Light Brigade’s catastrophe was published on 14 November 1854. The day before, however, The Times had offered a first treatment of the story in its leader column. It was indeed a ‘disaster’, said the newspaper, evoking vividly the brigade ‘simply pounded by the shot, shell, and Minié bullets from the hills’ as the cavalry advanced through ‘that valley of death’, and registering a loss all the more lamentable ‘because it seems to have arisen from some misunderstanding’. But still there was something to be celebrated: ‘Causeless as the sacrifice was, it was most glorious … The British soldier will do his duty, even to certain death, and is not paralyzed by feeling that he is the victim of some hideous blunder’. Years later, Tennyson’s son would recall his father writing his response to the charge on 2 December, ‘in a few minutes, after reading the description in The Times in which occurred the phrase “someone had blundered”, and this was the origin of the metre of the poem’; but in fact The Times report does not contain the phrase: that is Tennyson’s work. The poem first appeared in The Examiner on 9 December, signed ‘A.T.’, before being collected, in a revised version, in Tennyson’s volume Maud the following year. 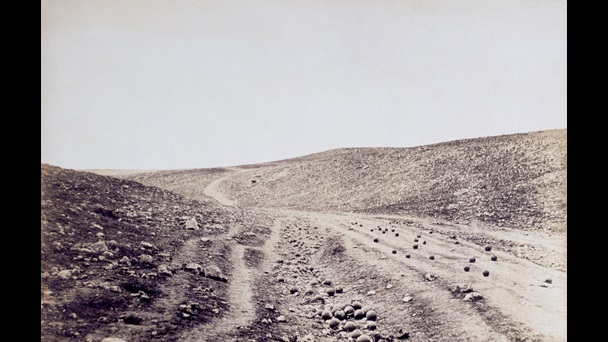 Cannonballs from the Charge litter the 'Valley of Death'. This haunting photograph was taken by Roger Fenton, Britain's first war photographer, 1854.

Tennyson's 'The Charge of the Light Brigade', first published in the Examiner 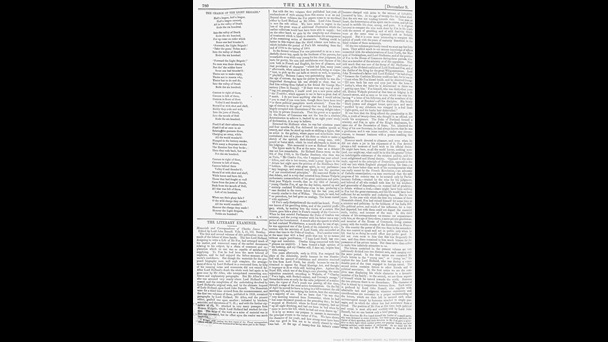 'The Charge of the Light Brigade' as it was first published in the Examiner, 9 December 1854.

The poem is the creature of its insistent rhythm, which captures the headlong plunge of the cavalry with great brilliance. As first published, Tennyson included a documentary detail about the captain:

‘Forward, the Light Brigade!
Take the guns,’ Nolan said:
Into the valley of Death
Rode the six hundred.

This was amended in later versions to ‘“Charge for the guns!” he said’, which adeptly anonymises the voice of authority: for one point of this poem is the irrelevance of who is giving the order, or why, for the men to whom it applies – ‘Their’s but to do and die’. Responding to The Times’ report, Tennyson is suspended between admiration at the reckless magnificence of the charge and a conviction of its idiocy; and the poem revolves around its insistently repeated key-rhymes – hundred, blundered, thundered, wondered, sundered – with an obsessed fascination. The moral vocabulary of the poem is brilliantly pitched between an endorsement of their heroism and a bewilderment at the sheer folly of its occasion. ‘O the wild charge they made! / All the world wondered’; but then wonder can be evoked by things appalling as well as things appealing: this episode of military incompetence manages to combine both. The Times quoted a French general who watched the whole thing: ‘C’est très magnifique, mais ce n’est pas la guerre’  (‘It’s very magnificent, but it’s not war’).[1] Tennyson partly shares that sense of an event that has transcended its sorry reality; but he remains conscious, too, that it is indeed nothing but war at the same time, and his ambiguously celebratory lines do not flinch to imply the grisly detail of hand-to-hand combat: ‘Cossack and Russian / Reeled from the sabre stroke / Shattered and sundered’.

Proof of 'The Charge of the Light Brigade' by Alfred Tennyson 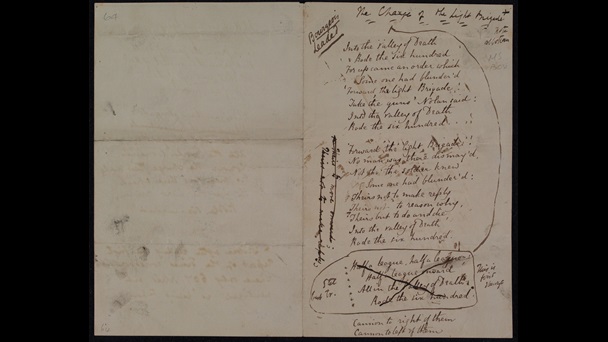 Draft of the second version of ‘The Charge of the Light Brigade’ in the hand of Alfred Lord Tennyson, Emily Tennyson and the poet’s publisher, 1854. 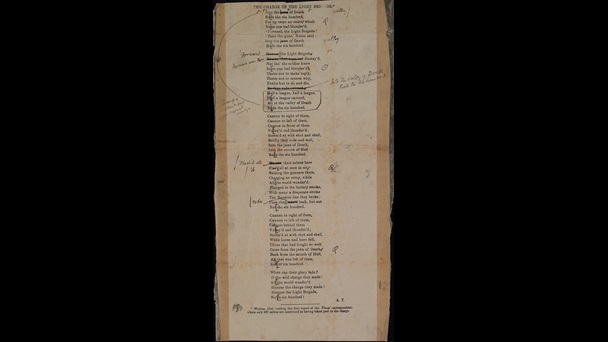 Printer’s proof for the seventh version of ‘The Charge of the Light Brigade’ with corrections Alfred Lord Tennyson’s hand, 1854.

Tennyson’s poetry was always drawn to imagine returns and repetitions, and the charge of the light brigade gave him an opportunity to explore that fascination once again, now from a bleak perspective. For this was not just a charge, but a charge and a terribly depleted return, ‘Back from the mouth of hell’; and Tennyson’s poem captures that movement in its own verbal returns. The stanzas repeat ‘Rode the six hundred’ until the fourth, with a shocked stutter on ‘not’: ‘Then they rode back, but not / Not the six hundred’. And then the fifth, when the honorific definite article has been shed too, as we start to count the war dead: ‘All that was left of them, / Left of six hundred’. The poem ends with a call to honour them, ‘Noble six hundred!’ That is a markedly better close than the revised version that Tennyson temporarily adopted in the first book printing of the poem:

Honour the brave and bold!
Long shall the tale be told,
Yea, when our babes are old –
How they rode onward.

Those lines are dutiful in their regard, but since the whole thing has been so emphatically about not just riding onward, disastrously, but then riding back, disastrously, too, its clinching ‘onward’ strikes a note of falser or simpler heroism than the poem deserves. ‘Noble six hundred!’ has a more fittingly epitaphic quality, an entirely appropriate sort of utterance that brings to a public conclusion to a poem of such bewildered private feelings.