The impact of the Napoleonic Wars in Britain

The start of the 19th century was a time of hostility between France and England, marked by a series of wars. Throughout this period, England feared a French invasion led by Napoleon. Ruth Mather explores the impact of this fear on literature and on everyday life.

Following the brief and uneasy peace formalised in the Treaty of Amiens (1802), Britain resumed war against Napoleonic France in May 1803; hostilities were to continue until the British victory at the battle of Waterloo in 1815. The return to war required the resumption of the mass enlistment of the previous ten years, especially as fears of a Napoleonic invasion once again intensified. The Corsican general Napoleon, soon to become emperor, had made no secret of his intentions of invading Britain, and in 1803 he massed his huge ‘Army of England’ on the shores of Calais, posing a visible threat to southern England.

Buonaparte's Soliloquy, from a collection of material relating to the fear of a French invasion 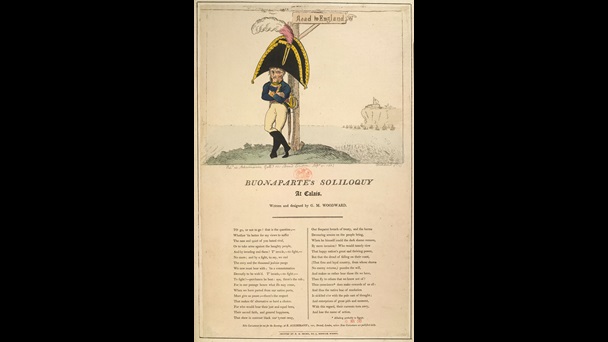 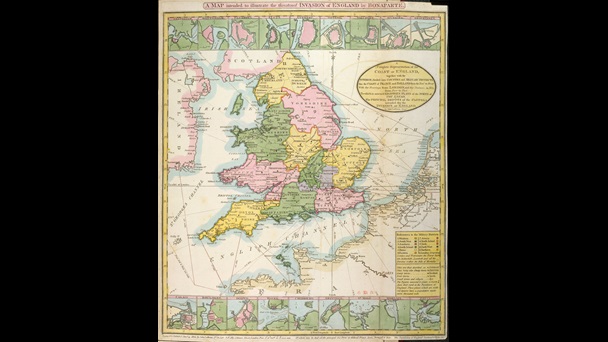 Map illustrating the fear of Napolean’s invasion of Britain, 1804.

Although fears of invasion were downplayed in satirical prints that mocked Napoleon’s size and strength, for many men and women these fears were very real. Indeed, the public rallied behind the British military, to the extent that the historian Linda Colley has argued that British identity was forged in these years.[1] For men, this often involved training with the local volunteer forces, which were established for protection in the event of a successful French landing. Some women found an outlet for patriotic or charitable impulses in the campaign to make uniforms for the troops, while others found perhaps less noble enjoyment in the social whirl that surrounded army camps and brought excitement to an otherwise dull and repetitive daily round. Jane Austen’s Pride and Prejudice captured the heady mix of danger and glamour that military men in their dashing, brightly-coloured uniforms could bring to a sleepy market town, and this mood was echoed in numerous popular ballads and in regular reports of soldiers’ elopements with local girls. A fascination with military men also fuelled a market in commemorative goods, especially of Nelson and Wellington, elaborate illustrated battle histories, toys and military-influenced fashions. Previously, British culture had been suspicious of land armies, but the glamorisation of soldiers helped to encourage enlistment at a time when it was very much needed. This increased recruitment and enthusiasm for the military demonstrated the army’s power both to the enemy and to discontents at home.

As well as increasing the size of the army and navy, the British government responded by strengthening existing defences and building new ones along the south coast, notably the Martello towers which can still be seen today. These reinforcements came at no small cost, and taxes were again increased to fund the war effort. Many British men and women were left in desperate misery due to high taxes, skyrocketing food prices, unemployment caused by wartime trade restrictions, and the increased use of labour-saving machinery. Economic struggles forced many men to sign up for the army. In the popular Lancashire ballad ‘Jone O’Grinfelt’, the protagonist illustrates the choice between enlisting and starving: Jone tells his wife he will ‘fight oather [either] Spanish or French’ before he spends another day cold and hungry.[2]

'The Friend of the People; & his Petty New Tax Gatherer paying John Bull a visit' by Gillray 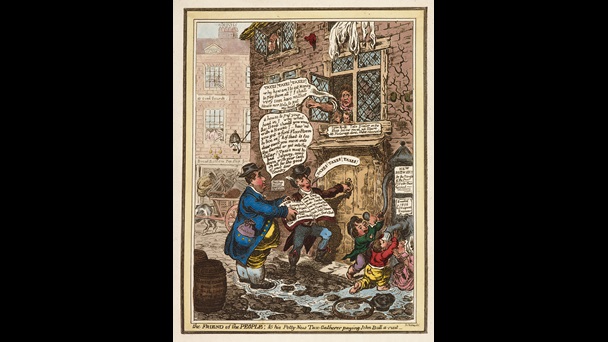 Satirical print by James Gillray about the increased taxes caused by the Napoleonic wars.

What the ballad does not mention is the fate of wives like Jone’s. Officially, army policy permitted only six married men per company, with all others paid as single men. The Duke of Wellington himself weighed in against the recruitment of married men, protesting that it would ‘leave their families to starve.’[3] Despite this, in miserable economic circumstances many husbands and fathers clearly felt they did not have much choice, and their wives and children were forced to rely on their own work or the support of the parish. Not all were willing to accept their situation passively, and the later years of the Napoleonic wars were characterised by strikes, riots and Luddism in some depressed areas like Yorkshire and Lancashire, with the militia brought in to put down internal dissent.

Charlotte Brontë’s novel Shirley (1849) is set during 1811 and 1812, and depicts the effects of war on a Yorkshire cloth manufacturing community, in which the mill operatives have become so desperately poor that they must consider emigration – even the owner of the mill is under considerable pressure to marry a woman he does not love to secure his financial position.

Much anti-war art and literature focused on the struggles of ordinary people and the capacity of war to impoverish and separate families. William Wordsworth’s The Excursion (1814) , for example, tells the tale of Margaret, whose husband is driven by poverty to enlist, leaving her and their child to cope in straitened circumstances, in which she eventually goes mad with wondering if he will ever return. Anna Laetitia Barbauld’s poem ‘Eighteen Hundred and Eleven’ likewise spoke of women suffering at the uncertainty of the fate of loved ones, and described in apocalyptic terms the collapse of commerce and the spread of poverty and famine in all warring nations. While many Britons felt hostility was justified to repulse Napoleon’s expansionist aims, Barbauld and others questioned the morality of war, warning Britain that ‘Thou who hast shared the guilt must share the woe’.[4]

After the Battle of Trafalgar in 1805, the threat of a French invasion receded. However, Napoleon continued to be successful in his campaigns on the continent, and the continued costs of a distant war left wearied even former enthusiasts. Hopes for a better life after the war were frustrated, and maintenance of taxation and the flooding of the labour market led to continued unrest among working people. This began to express itself in the formation of organised political groups calling for better political representation. In 1819, the Female Reform Society of Manchester denounced the ‘unjust, unnecessary, and destructive war, against the liberties of France’, stating that it had ‘tended to raise landed property threefold above its value, and to load our beloved country with an insurmountable burden of Taxation’.[5] Although the war had begun with the ostensible aim of protecting the liberties of the British people, many of those people queried whether the corrupt aristocracy were the only ones to benefit.

[2] In the popular Lancashire ballad ‘Jone O’Grinfelt’, the protagonist illustrates the choice between enlisting and starving: Jone tells his wife he will ‘fight oather [either] Spanish or French’ before he spends another day cold and hungry.

[3] Letter from Duke of Wellington to Colonel Torrens, January 28th, 1811, quoted in Jennine Hurl-Eamon, “Insights into Plebeian Marriage : Soldiers, Sailors, and their Wives in the Old Bailey Proceedings” in London Journal, 3.1 (2005), p.24.