The regnerative power of nature in Silas Marner

In a world of increasing workload stress, we are told that people experience greater loneliness and detachment. Life success is too-often measured in terms of money. The negative effects of being motivated by financial gain and the positive regenerative power of nature is something tackled in George Eliot’s 1861 novel Silas Marner. By setting her novel at the turn of the 19th century, in a pre-industrial era, Eliot pre-empts current discussions about the damage caused by economic fixation. With the feel of a modern fairytale, Silas Marner depicts the threat of industrial and technological obsession with capital in more universal terms. Eliot draws on the Romantic poet William Wordsworth to present a story in which a world of human sympathy finds essential nourishment in the regenerative, natural world.

Natural images of growth and vitality

Silas Marner opens with Silas leaving his industrial town and close-knit religious community when wrongly accused of theft. Bereft of hope and purpose, he lives the life of a recluse in his new residence, the rural Raveloe. His desperation is overturned when he adopts a young girl, Eppie, who brings hope and love back into his life. The novel’s epigraph from Wordsworth’s poem ‘Michael’ tells us that a child brings ‘hope’ and ‘forward-looking thought’. Silas Marner is full of natural images of growth and vitality that insist that human life needs to have a similar forward trajectory to thrive. Although it is clear that Silas’s love for his adopted daughter is the key to his renewed life, the novel also emphasizes the regenerative power of nature and its positive influence on the kind of nurturing care that Silas and Eppie represent.

Eppie has also lost her home and, in finding Silas, she helps her adopted father to put down roots and begin to thrive again. While Silas nurtures Eppie with parental tenderness, Eppie draws Silas into the living world around them. Finding home, according to Eliot’s novel, is a matter of engaging with other living beings, with the natural world of growth, nurturance and organic life. In a novel full of natural imagery, Eliot’s human characters appear as plants. They may be uprooted and transplanted but with nourishment and care can reproduce strong roots.

The reviving power of childhood

Eliot’s novel has as its epigraph a few lines from Wordsworth’s poem, ‘Michael’. A tale of a shepherd and his much loved son, Luke, the poem depicts intergenerational affection and the shepherd’s intimate relation with the worked landscape. The lines Eliot quotes suggest that Silas Marner too will be about the reviving power of childhood:

A child more than all other gifts
That earth can offer to declining man,
Brings hope with it, and forward-looking thought. 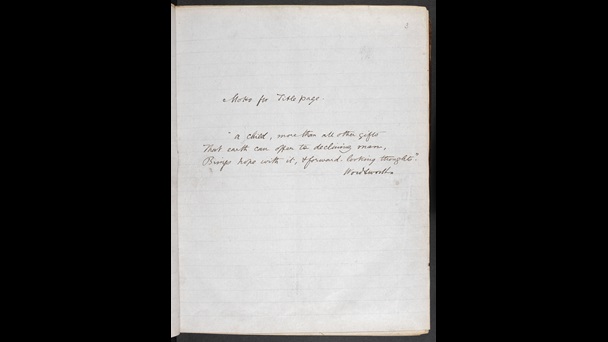 The epigraph to Silas Marner is from William Wordsworth’s poem ‘Michael’.

Important here is the fact that the child is a gift from the ‘earth’. Part of the reason Eppie revives the reclusive Silas is because she is a vibrant element of the natural world. Silas Marner expands Wordsworth’s poem, especially its depiction of landscape’s cultivating of human relationships. We can see in the novel what Wordsworth had expressed as ‘the gentle agency/ Of natural objects’ (ll. 29–30) that enable the poet to feel ‘For passions that were not my own’ (l. 31). Something about the natural world encourages in the shepherd Michael, and in Eppie and Silas, a tenderness that fosters human relationships.

When Silas becomes exiled from his community and his faith, he becomes disengaged from everything around him. He retreats into the comforting repetition of his weaving, which works to ‘bridge over the chasms of his life’ (ch. 2). The wealth his work brings further isolates him. The gold works upon Silas; it encourages his ‘hard isolation’ (ch. 5). Contact with his gold kept ‘his thoughts in an ever-repeated circle, leading to nothing beyond itself’ (ch. 14). Self-contained like Silas himself, the gold is inert and life-sapping. It is ‘deaf to the song of birds, and started to no human tones’ (ch. 14): it reproduces in Silas its own lack of perceptiveness to the world and other people. It is only when his gold is stolen and a lost golden-haired child finds refuge in his cottage that Silas enters into the vibrant natural world of growth, energy and, in Wordsworth’s terms, ‘forward-looking thought’.

Silas’s transformation is expressed in a shift of attention. He moves from a state of inertia – what is, in fact, a lack of attention – to one of ‘loving sunshine, and living sounds, and living movements’ (ch. 14). The replacement of gold by a living, loving child is a reversal of the tale told in another of Wordsworth’s poems, ‘The Ruined Cottage’. In this poem, a father and husband mistakenly thinks his family needs gold more than they need him, to tragic ends. Eliot’s rewriting of Wordsworth’s poems ‘Michael’ and ‘The Ruined Cottage’ presents a more hopeful trajectory for the despairing Silas.

Silas is brought back to life through this child that draws him to life itself: ‘Eppie was a creature of endless claims and ever-growing desires, seeking and loving sunshine, and living sounds, and living movements; making trial of everything, with trust in new joy, and stirring the human kindness in all eyes that looked on her’. (ch. 14) Eppie is not merely affectionate but a part of regenerative nature and draws Silas to that reviving world. Like the natural world around her, Eppie is characterised by a forward-moving dynamic that embodies hope:

Eppie was an object compacted of changes and hopes that forced his thoughts onward, and carried them far away from their old eager pacing towards the same blank limit. (ch. 14)

Eppie is made up of ‘changes’: she is a living, growing being. But she is also made up specifically of forward-looking ‘hopes’, and Silas looks forward to a future moment when Eppie ‘would have learned to understand how her father Silas cared for her’ (ch. 14). The effort of Silas’s nurturing of Eppie is the foundation of his hope for reciprocal affection, which is where the novel ends. Silas’s hope for Eppie’s flowering is dependent precisely on the nurture that he plans to give her.

Where the religious community of Silas's past were mistaken in believing him a thief, so they were also mistaken in rejecting his inherited practice of collecting medicinal herbs. They had judged Silas’s mother’s natural remedies as an affront to the power of prayer. Their overdependence on a view of the world that privileged God’s supernatural intervention – whether in casting lots to determine Silas’s innocence or in miraculous healing – denies the divine power of nature, evident in Wordsworth’s poems and in Silas Marner. When Silas returns to his mother’s work of collecting herbs, it causes him to focus on expectations for future health and care. But it also returns Silas to his inherited practice, and in doing so redeems his past. When the herbs, ‘their unchanged outline and markings, lay on his palm, there was a sense of crowding remembrances from which he turned away timidly’ (ch. 14). While Eppie and the herbs lead his thoughts forwards, they also reconnect Silas to his past.

Towards the end of the novel, Eppie asks her father for a garden. She also falls in love with a gardener, Aaron; someone who expresses a faith in nature’s self-replenishing capacities. Aaron offers to bring cuttings to populate Eppie’s garden, observing: ‘there’s never a garden in all the parish but what there’s endless waste in it for want o’ somebody as could use everything up’. The natural world represents an endless regeneration and capacity for growth and hope.

Habitual activity – the rhythm of a weaving loom or the feel of familiar herbs in the hand – shape us in different ways. Silas gains relief and forgetfulness from weaving. But he benefits so much more from his engagement with the natural world and the vivacious Eppie. The novel depicts the very different effects of what and who we spend time with. Habitual weaving and the counting of gold had sapped Silas’s life. But the child Eppie, as part of the living vibrant natural world, brings vitality and renewed life.