The title page of William Blake’s Songs of Innocence (1789)

Michael Phillips compares the title page of William Blake’s Songs of Innocence to an earlier children’s book, in order to reveal Blake's progressive views on the importance and power of childhood.

What does the title page show?

The title page of Blake’s Songs of Innocence dramatically introduces the collection of illustrated poems that he completed and first issued together in 1789. It depicts two children standing at the knee of their nurse or mother reading from a book, out of doors, in a garden or the countryside. Symbolically, a young vine entwines itself for support around the trunk of a tree that in turn provides shade. Birds rise up through the lettering of the title, a piper in a broad-brimmed hat leans back against the capital letter I of Innocence, while higher up children can be seen at play in the capital letters O and G of SONGS, and an angel leans back against the letter N engaged in writing in a book. What imagery could be more appropriate, indeed innocent, to head such a collection? But Blake wrote and designed these poems in response to an 18th-century tradition of literature addressed to children for the purpose of moral instruction. For those familiar with this tradition the implicit comparison would be recognised and explored. 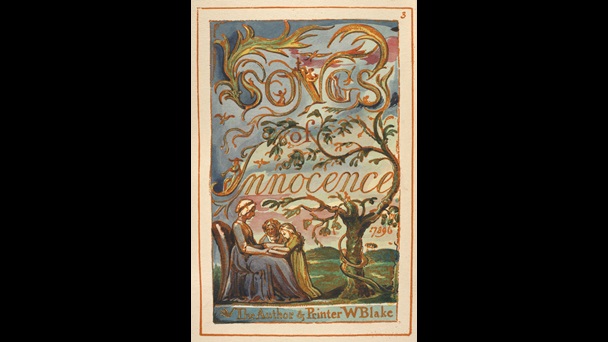 The title page of Blake’s Songs of Innocence, 1789.

How does this compare to a book that children at that time would have known?

The most prominent publisher of these books for children, that typically, like Blake’s Songs, combine text and emblem, word and image, was John Newbery, who was based at ‘the sign of the Bible and Sun’ in St. Paul’s Church-Yard. A Little Pretty POCKET-BOOK, Intended for the Instruction and Amusement of Little Master Tommy, and Pretty Miss Polly, first published in 1744 and here in an edition of 1767, is typical. It is the frontispiece engraving in particular, and others like it in general, that Blake invites us to recognize, as they are mirrored in the design of his own title page. The more closely we look, the more distinct and telling the discrepancies become.

The scene of Newberry’s frontispiece engraving is set indoors, in the drawing room of a comfortable middle or upper class home. The nurse or mother is reading from a book, at the same time she raises her hand in a gesture drawing attention to the point of her instruction. The two children are dressed like little adults presumably representing what they are to gain by their instruction: moral uprightness commensurate with material success and station. 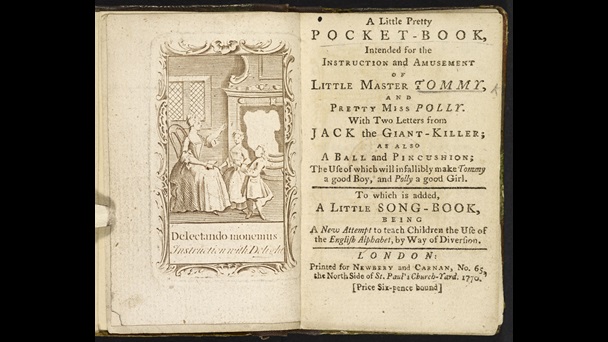 The title page of John Newbery’s A Little Pretty POCKET-BOOK, 1767.

How can we interpret the differences?

When we compare Newberry’s frontispiece with Blake’s title page, the discrepancies are clear enough. Blake has set his scene out of doors. The relaxed and informal dress of both the woman and the two children, together with the children at play amongst the letters of the title in the company of a piper and an angel, contrast sharply with the formality and comparative claustrophobia of the Newberry frontispiece. The implicit juxtaposition within the pastoral tradition, expressed by the contrast between city and country, also becomes explicit. But it is not the juxtaposition between material circumstances that is the point here. In contrast with the Newberry frontispiece, where the nurse or mother is holding the book from which she is reading and instructing the children, in Blake’s title page it is the children who hold the book; it is they who are reading to the adult.

As the poems of Songs of Innocence are read and unfold, we discover that it is we who can learn from the children. It is from their point of view, dramatically expressed in poem after poem, that we begin to question and gain insight. The shift in point of view from adult to child is fundamental and revolutionary. As readers, in particular as experienced readers, it becomes a matter of acknowledging the child’s way of seeing and responding to the world - in the most profound sense, by taking it upon ourselves, by it becoming a part of ourselves. Responding to the Songs of Innocence in this way is to realise the promise made to our first parents by the Archangel Michael at the close of John Milton’s Paradise Lost, the promise of a ‘paradise within’, that is latent in each of us and to be regained. It is the evocation and promise of all pastoral.

Michael Phillips demonstrates William Blake’s printing process, explaining how it relates to his work as a poet and artist. Filmed at Morley College, London.