Women and the Russian Revolution

Katie McElvanney explores how women’s lives changed during the Russian Revolution, tracing the history of female revolutionaries in Russia and the different ways women documented and participated in events.

What was life like for women before the Russian Revolution?

The life experiences of women in the Russian Empire before the Revolution were extremely diverse. While wealthier women had access to limited education, especially after women’s higher education courses were introduced in the late 1870s, peasant women (who constituted the majority of the Empire’s female population in the 19th century) were mostly illiterate.

Despite class differences, society was staunchly patriarchal and women of all backgrounds were not allowed to vote or hold public office until 1917. 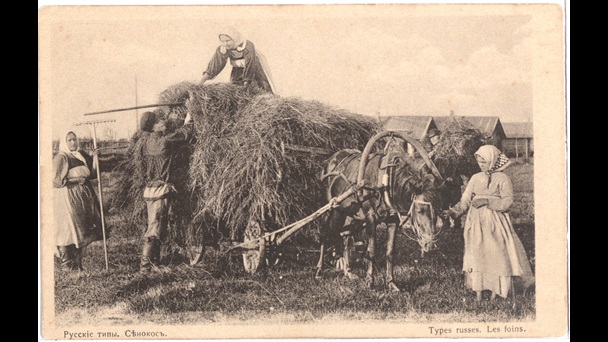 Towards the end of the 19th century, peasant women began to migrate to the cities in large numbers to work in factories or domestic service. Although their working hours and conditions were long and difficult, this was the first time that many women experienced independence from the patriarchal village traditions and structures.

World War I brought even greater freedom – and hardship – as thousands of women were mobilised to fill roles left vacant by men at the front and to support the war effort.

Who were the first women revolutionaries in Russia?

In the 1860s and 70s, a number of women joined the populist revolutionary movement that was gathering momentum in Russia. Many of the women were from noble or bureaucratic families and had studied abroad, where they had formed and participated in women’s study circles. Calling for social justice and political change, these women took advantage of the revolutionary mood sparked by Alexander II’s reforms to serfdom, the judiciary and education.

Both male and female revolutionaries printed and distributed propaganda, and carried out political and economic terrorist acts. In 1874, thousands of Populists (Narodniks) went to the countryside to live among peasants in the hope of improving living standards and raising socialist consciousness.

Tsarist authorities swiftly crushed the movement and hundreds of male and female activists were arrested. New non-violent and violent groups soon emerged, including the revolutionary terror organisation People’s Will (Narodnaia Volia), which was responsible for the assassination of Tsar Alexander II in 1881.

Some of the most well-known women revolutionaries of the 19th century include Vera Zasulich, Maria Spiridonova, Vera Figner and Ekaterina Breshko-Breshkovskaia (Catherine Breshkovsky). 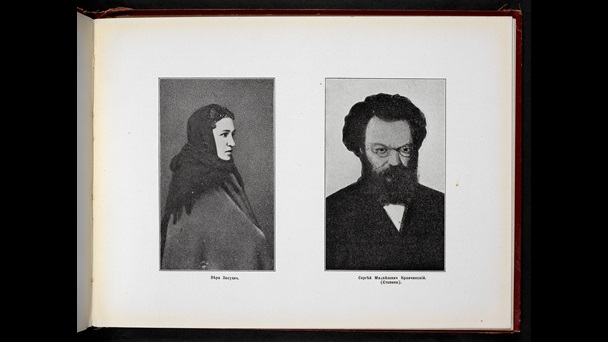 The rise of Social Democracy in Russia in the 1880s attracted both women workers and women from the intelligentsia. Students from the newly established women’s higher courses played a particularly key role in shaping the social democratic views among urban workers and many later became leading Bolshevik figures.

Among them was Nadezhda Krupskaia. A tireless advocate for women’s and educational issues, Krupskaia married Lenin in 1898 and held prominent roles within the Bolshevik party until her death in 1939.

How was the ‘woman question’ addressed in Russia?

From the mid-19th century, Russian intellectuals, such as the anarchist Petr Kropotkin, began to take an interest in the ‘woman question’. These intellectuals, mostly men and a few noblewomen, debated in salons and the press on the issue of women’s legal and social status and their role in the family.

The campaign for women’s suffrage and equality in Russia gained momentum during and after the 1905 Revolution. More radical groups, such as the Russian Union for Women’s Equality, and journals dedicated to the ‘woman question’ were established.

Bolshevik revolutionaries were critical of what they saw as the ‘bourgeois’ women’s groups, which were mainly run by women from privileged backgrounds. They argued that these ‘bourgeois’ women could not understand the needs of workers and peasant women and that the women’s movement threatened working-class solidarity.

On the newly-established Women’s Day in 1914, a group of Bolshevik women, including Konkordiia Samoilova, Nadezhda Krupskaia and Inessa Armand, published the first Russian socialist women’s journal, Rabotnitsa (The Woman Worker). However, the journal was careful to distance itself from feminist issues. Rabotnitsa ceased publication after only seven issues but was revived in 1917 and became one of the main Bolshevik publications. 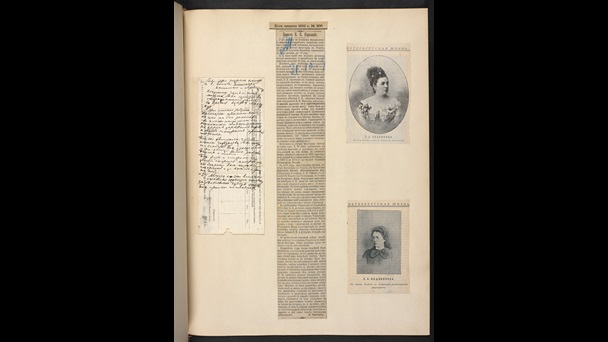 An album of press cuttings on the emancipation of women in Russia, collected and annotated by Prince P. A. Kropotkin

After the February Revolution, the fight for women’s suffrage increased, in line with the general call for the implementation of democratic reforms. Along with educated women of the intelligentsia, female workers and peasants also called for the right to vote.

In March 1917, the largest women’s demonstration in Russia’s history took place in Petrograd. Led by Poliksena Shishkina-Iavein, President of the League for Women’s Equal Rights and Russia’s first female gynecologist, and the revolutionary Vera Figner, the march was attended by up to 40,000 women.

In July 1917, women over 20 were given the right to vote and hold public office. The first opportunity to exercise their newly-won right was during elections for the Constituent Assembly in November 1917. In many areas, such as Yaroslavl, the female turnout exceeded that of men.

What role did women play in the Russian Revolution and civil wars?

Historians generally agree that the February Revolution began in Petrograd on International Women’s Day, 23 February (Old Style: 8 March) 1917, when thousands of women from different backgrounds took to the streets demanding bread and increased rations for soldiers’ families. There is, however, disagreement as to whether the women-led demonstrations were spontaneous, or whether they were a result of conscious political action. The former view tends to downplay the role of women in the Revolution, painting them as impulsive and politically backward.

The Women’s Day demonstration is often upheld as the main (and even sole) example of women’s involvement in the Revolution. Yet, as studies, such as Jane McDermid and Anna Hillyar’s book Midwives of the Revolution: Female Bolsheviks and Women Workers in 1917, have shown, women activists and workers played a crucial role throughout 1917. In the months leading up to the October Revolution, for example, working class women and Bolshevik activists staged a number of strikes and demonstrations to protest the continuation of the war and poor working conditions.

During the October Revolution, women soldiers helped to defend the Winter Palace against the Bolsheviks. Women’s battalions had been established earlier in 1917 on the authorisation of Alexander Kerensky, leader of the Provisional Government, to fight in World War I and to shame men into joining the army. The first, and most famous, of these battalions, the ‘Woman’s Battalion of Death’, was established and led by Maria Bochkareva, an uneducated peasant woman from Siberia.

The Women’s Battalion of Death 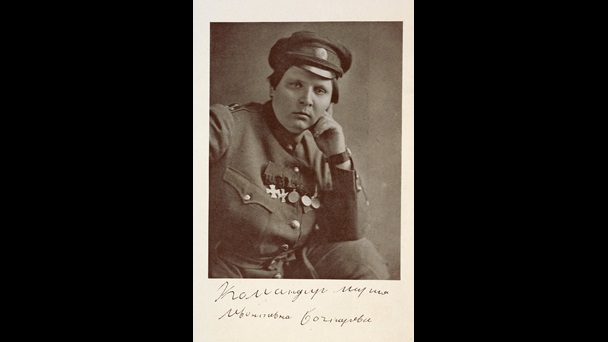 Photograph of Maria Bochkareva, founder and leader of the Women’s Battalion of Death

The engagement of women in combat roles continued on both sides during the Russian civil wars. However, while up to 80,000 women are estimated to have served with the Red Forces, the majority served in support roles as doctors, nurses, telephonists and clerks.

Nevertheless, some women did fight for the Red Army in combat roles and even held command positions. One such example is Rozaliia Samoilovna Zemliachka, a senior military commissar on the Southern Front and Northern Front who was nicknamed ‘Bloody Rosa’ by the British opposition.

As well as participating in combat, a small but significant number of Bolshevik women were appointed as political workers, whose task was to instruct Red Army soldiers on politics.

While women also fought in the White Armies, their numbers were considerably smaller and the Whites did not actively recruit women for combat roles.

How did women document their experiences of the Russian Revolution?

Although women of different nationalities and backgrounds documented their experiences and impressions of the Revolution and civil wars, their accounts have often been overlooked or side-lined. Among these are testimonies by ordinary women that provide fascinating and important insights into life during this period.

One such ‘ordinary’ account is a diary written by a young Russian girl named Nelly Ptashkina. 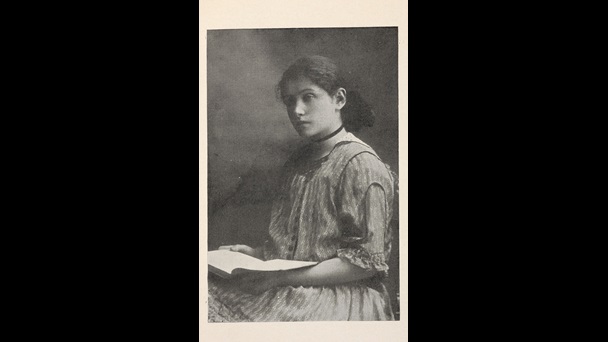 Women journalists also recorded events for Russian and international newspapers. Among them were:

How did the Bolsheviks change the lives of women after the Russian Revolution?

The first years of Bolshevik rule brought substantial changes to the lives of many women. Alexandra Kollontai, as People’s Commissar for Social Welfare and the first woman in the Bolshevik Government, was instrumental in improving women’s rights. She had written extensively on the ‘woman question’ prior to the Revolution and was an advocate for sexual liberation. 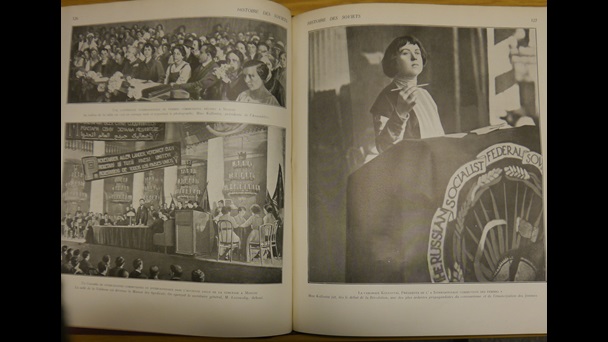 Photograph of the Russian revolutionary and feminist Alexandra Kollontai

The Family Code of 1918 gave women equal status to men, granted illegitimate children the same legal rights as legitimate ones, secularised marriage, and allowed a couple to take either the husband or wife’s name once married. Divorce became easily obtainable, abortion was legalised in 1920, and communal facilities for childcare and domestic tasks were introduced with the aim of relieving women of household chores.

In 1919, a Women’s Bureau (Zhenotdel) was established. Initially led by Alexandra Kollontai, Inessa Armand and Nadezhda Krupskaia, its purpose was to disseminate propaganda among working class women and attempt to engage them in public life and the revolutionary process.

The Zhenotdel also sought to promote literacy and education among women in Central Asia. In the absence of a sizable proletariat in Central Asia, the Soviets hoped that Muslim women, as the most oppressed group in the region’s patriarchal structure, could become agents of social change.

Muslim women as agents of revolution were tasked with bringing socialist values to traditional pre-capitalist society. Their attempts to target women in the region were largely met with resistance – partly due to the history of Russian colonisation in the region – and contributed to growing anti-Soviet feeling.

Muslim women and the Revolution The reforms to improve women’s lives were, however, short-lived. By the mid- to late-1920s, both public and party attitudes towards family policy had become more conservative. In the 1930s, Stalin reversed many of the rights granted to women and families in the 1918 Family Code. Abortion was banned, divorce became extremely difficult to obtain, and the law on the rights of illegitimate children was revoked.

Stalin also closed the Zhenotdel (the party’s Women’s Bureau) in 1930 on the basis that women’s emancipation had been achieved in the Soviet Union and the department was therefore no longer needed. Despite this, throughout the entire history of the Soviet Union, women constituted (on average) only 3–4% of the party’s Central Committee.

The early Communist vision of women’s equality and liberation – where women would be able to work in any profession and communal institutions would take responsibility for childrearing and housekeeping – was never fully realised. As emphasis shifted back towards the traditional family unit in the 1930s, women were faced with the double burden of combining domestic duties with (often strenuous) full-time work.

Elizabeth A.  Wood, The Baba and the Comrade: Gender and Politics in Revolutionary Russia (Bloomington, 1997)

Laurie Stoff, They Fought for the Motherland: Russia’s Women Soldiers in World War I and the Revolution (Lawrence, Kan, 2006)