The Baha’i Faith is a scriptural religion. Dr Moojan Momen explains the Baha’i beliefs about sacred texts and prophets, the transmission and distribution of their scripture and its role in the community.

Baha’is regard each of the prophet founders of the major religions of the world as being the Manifestations of the Names and Attributes of God (Manifestations of God for short). They have a dual station: in their higher reality, they are essentially one; but in their earthly station, they each come with a unique name and a special mission that is related to the time and circumstances of their coming. This can be likened to the series of teachers that a child has at school. Each teacher builds on what the teacher before has taught and the scriptures of each religion can be likened to the textbook that each teacher brings to the child. So each teacher is equally important to the child and they all have the same station. However, the series of Divine teachers, the Manifestations of God, has no end. Baha’u’llah teaches that he is not the last one. Whenever humanity needs further guidance, a Manifestation of God will be sent but Baha’u’llah says that this will not be for at least another one thousand years.

Baha’is refer to the works of Baha’u’llah as being the ‘Revelation’ of the Word of God and to Baha’u’llah’s writings (which comprise of letters to individuals and some books) as ‘Tablets’. Over 20,000 unique works by Baha’u’llah have been identified at the Baha’i World Centre, comprising just under seven million words. The Baha’i Faith is a scriptural religion; the current written texts are considered fully authoritative. Oral reports, although they exist, are considered too unreliable to be fully authoritative and are to be discounted completely if they contradict the written text. Most of Baha’u’llah’s writings are in a mixture of Arabic and Persian, although there are some that are just in Arabic, some in Persian and some in pure Persian (farsi-e sareh, Persian with little or no use of Arabic and other loan words).

How did Baha’u’llah write the Tablets?

As Baha’u’llah spent most of his adult life in exile, remote from the majority of his followers in Iran, his communication with them was mostly through the written word in the form of Tablets, which were often written in response to questions sent by the Baha’is. These would be taken to Iran by a few dedicated couriers and a steady flow of pilgrims who made the arduous journey.

As each Tablet arrived in Iran, it would be studied by its recipient and copies made to distribute to other Baha’is. These Tablets formed the main source of inspiration and guidance for the community, comprising Baha’u’llah’s theological, mystical and ethical teachings and laws for the individual; his social teachings; and teachings intended to bring peace and harmony at the global level.

Some of these works were written in Baha’u’llah’s own hand. However, while in Edirne, his brother Mirza Yahya attempted to take his life by poisoning him as part of a leadership struggle. He was unsuccessful, Baha’u’llah recovered but was left with a tremor which affected his handwriting. Specimens of Baha’u’llah’s altered hand-writing can be seen here: 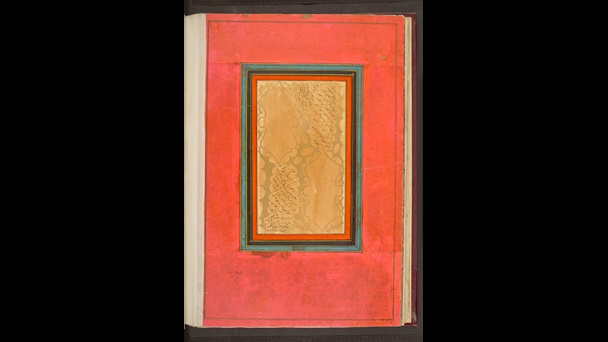 Short letters (Tablets) in the handwriting of Baha’u’llah. The effect of his poisoning can be seen if this handwriting is compared with the steady bold strokes of his childhood calligraphic exercises.

Most of Baha’u’llah’s revelations were dictated to his secretary. These were recorded initially in a form of short-hand which became known as ‘revelation writing’. 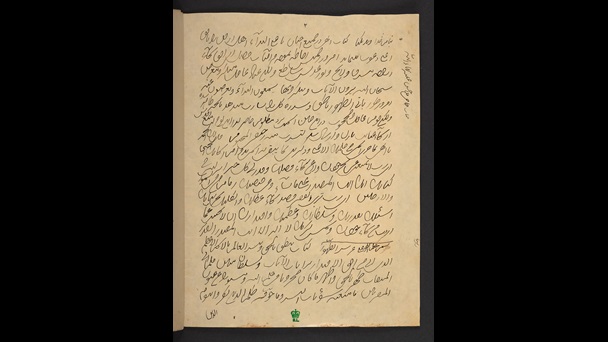 Revelation Writing: Baha’u’llah dictated his works so rapidly that his secretary develop his own form of shorthand. It can be read with practice.

Most of Baha’u’llah’s output in the Akka period was transmitted in this way. The Tablets were usually letters to individuals but often containing general statements and guidance.

These initial texts were transcribed by another secretary to create copies that were then sent to Iran or elsewhere. One of those who prepared many such copies, and whose copies are regarded as being so accurate that they are relied on as authoritative texts, was Zayn al-Muqarrabin.

Kitab al-aqdas and other Tablets by Baha’u’llah 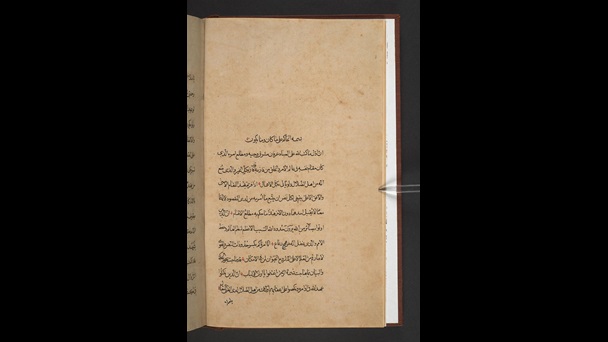 Manuscript copy of Baha’u’llah’s most important book, the Kitāb al-aqdas (The Most Holy Book). The copyist is Mulla Zayn al-‘Abidin Najafabadi who was given the title Zayn al-Muqarrabin. He made copies of Baha’u’llah’s writings for onward transmission to Iran and elsewhere. His copies are highly regarded for their accuracy.

In Iran, when a Tablet arrived in a town or village, the local Baha’is would gather to hear it read out to them and they would consult about it. Copies of it would be made and many of the Baha’is would have bound compilations of these Tablets either written out by themselves or by a local Baha’i with good handwriting.

Individual Baha’is would often ask a good calligrapher to write out one particular passage that they liked and this would then be illuminated – decoration usually with gold and coloured designs – and often hung on a wall. 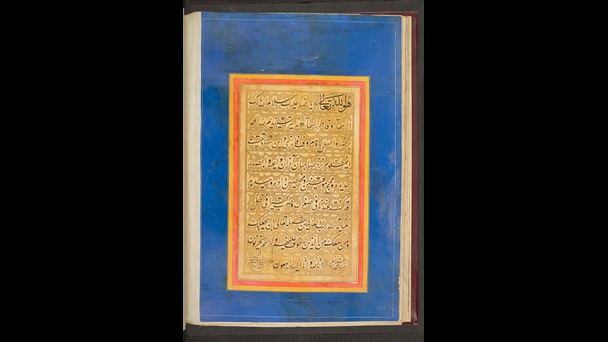 Tablet of Baha’u’llah in the calligraphy of the celebrated Baha’i calligrapher Mishkin Qalam. His signature is on the two sides of the bottom line together with the date Sha'ban 1308 (March/April 1891).

Baha’i books were printed in India from about 1882 onwards at Baha’u’llah’s direction. The first book to be printed was Baha’u’llah’s Kitāb-i Īqān. After 1892, the publication of Baha’i books shifted to Egypt, which was a major hub for publishing in the Middle East at the time. 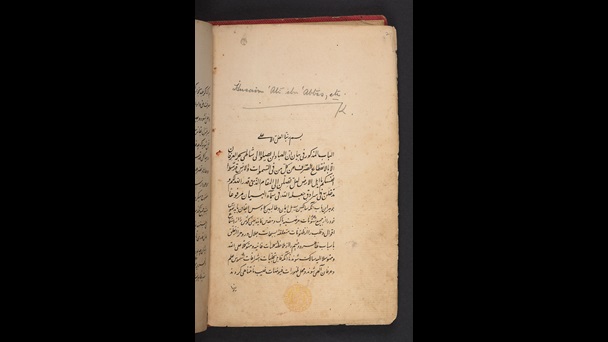 This is the opening page of the first ever publication of a Baha’i book. It the Kitāb-i Īqān (Book of Certitude), by Baha’u’llah and was printed in India around 1882.

Both the Bab and Baha’u’llah emphasise that whatever their followers produce should be with the greatest degree of beauty, perfection and refinement of which they are capable. The Bab explains that the ‘paradise’ of anything and anyone is attained when they are raised to the highest degree of beauty and perfection possible to them. He uses calligraphy and illumination as an example of this:

[W]hoever possesseth power over anything must elevate it to its uttermost perfection that it not be deprived of its own paradise. For example, the paradise of a sheet of paper on which a few excellent lines are inscribed is that it be refined with patterns of gold illumination, adornment, and excellence that are customary for the most exalted parchment scrolls. Then the possessor of that paper hath elevated it to its utmost degree of glory (Persian Bayān, Vahid 4, Chapter 11).[1] 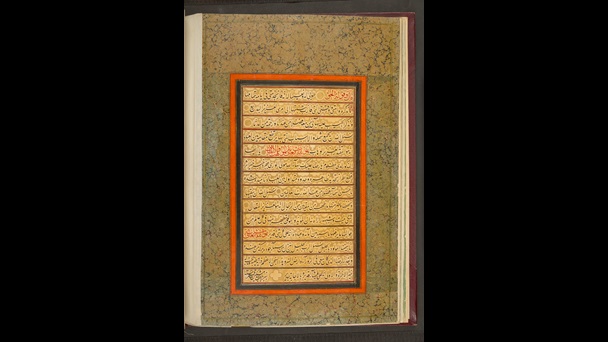 Some of the writings of Baha’u’llah in the penmanship of the renown calligrapher Mishkin Qalam and illuminated with gold.

The Bab attached great importance to the form and beauty of his writings. He instructed that some of his writings, especially prayers for men, be written in the form of a five-pointed star, which was called ‘The Temple’ (haykal – in that it created the form of the human body) for men, or in a circular pattern (da’irih) for women. 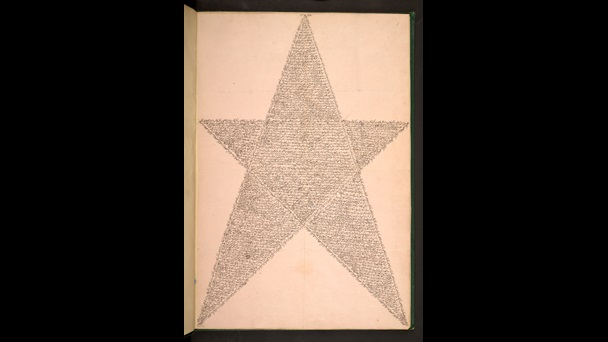 The haykal (temple) representing the form of the human body. The Bab gave the text for many of these but this one is in his own handwriting.

The Bab however also emphasises that he does not lay a burden on the artist and artisan that is beyond their capacity. However, the theory of beauty and refinement should be manifested in all human productions. Ornate calligraphy is used as an example of a wider point – that whatever one produces should be done with the greatest degree of attention and finesse that one is capable of. Indeed, the importance of calligraphy has lessened in the Baha’i Faith as the community expanded from being predominantly a Persian one (among whom calligraphy was much appreciated) to being a global one. However, the ethos of striving for beauty and refinement continues. Perhaps the epitome of this human endeavour for refinement are the various Baha’i Houses of Worship around the world and, in particular, the buildings at the Baha’i World Centre, which have been designated by UNESCO as a world heritage site.

The role of scripture in the Baha’i community

The Baha’i scriptures encourage individuals to transform themselves from self-centredness and a desire for wealth and power into individuals with spiritual attributes such as love, justice, patience, trustworthiness and truthfulness. This transformation best occurs when the individual lives a life of service to others; a cohesive interaction of an individual’s ‘being’ and ‘doing’. The framework for this endeavour are the laws regarding prayer, fasting and meditation given by Baha’u’llah. The aim is to be of service to the wider society, not just the Baha’i community.

These scriptures also give instructions and guidance for the institutional structure of the Baha’i community. They seek to create communities in which power has been removed from individual members of political and religious hierarchies and given instead to elected councils which operate by a consultative decision making process that Baha’u’llah and his successors have developed. The result is the formation of elected councils (the Spiritual Assemblies at the local and national levels) and the establishment in 1963 of the supreme global elected council of the Baha’i community, the Universal House of Justice.

Although as yet the Baha’i scriptures have only had limited impact at the international level, the Baha’i community is active at the United Nations and other international institutions, introducing Baha’i concepts and teachings such as the advancement of the social role of women, the importance of education, and the need to educate people away from prejudices and all forms of hatred and conflict. The overall aim is to achieve peace in a framework of justice. The principal teaching of Baha’u’llah is the oneness of humankind and his purpose is to achieve this unity by encompassing human diversity rather than imposing uniformity.

In reality all are members of one human family – children of one Heavenly Father. Humanity may be likened unto the vari-coloured flowers of one garden. There is unity in diversity. Each sets off and enhances the other’s beauty.[2]

More articles on The Baha’i Faith