Dr Rishi Handa looks at bhakti in Hinduism, exploring its common modes, the Hindu concept of enlightenment and how to achieve it, the importance of the Divine Name and the veneration of forms of the deities.

If any aspect of religiosity can be said to pervade India, it is bhakti. In a land whose culture is filled with a plethora of devīs (goddesses) and devas (gods), it is the foremost way by which Hindus express and experience the Transcendent.

Bhakti is best rendered in English as ‘loving devotion’, but it is much more than that. While common objects of bhakti can be one’s guru (teacher) and one’s country, this bhāva (emotion or feeling) is typically directed to īśvara (the divine, ‘God’). Bhakti can be articulated through gratitude, honouring of the deities, engaging in formal ritual service to a deity, hymn-singing, reading devotional scriptures, and constantly remembering the name of one’s deity. This list is certainly not exhaustive.

The nine modes of bhakti

According to a number of Hindu texts, there are nine ways of expressing bhakti. These differ depending on the text. According to two of the key Purāṇas of Hinduism, the Bhāgavata Purāṇa centred on Krishna (also spelt Kṛṣṇa), and the Viṣṇu Purāṇa (focused on Vishnu, also spelt Viṣṇu), the nine ways are:

One of the most famous retellings of the Rāmāyana from the medieval period is the Rāmcaritmānas (1574 CE) of Gosvāmī Tulsīdās (c. 1532–1623 CE) in the regional language of Avadhi. In the text, the central character, the avatar Rāma, explains nine modes of bhakti to his devotee Shabarī. These are:

What is the Hindu concept of enlightenment?

To understand bhakti, one must understand self-realisation or spiritual enlightenment. A well-known topic of Hindu spirituality, enlightenment involves a dissolving of the ahankāra (ego), although it would be more accurate to speak of the ego being relegated. By the ego, what is meant is the sense of individuality that makes us identify with the body-mind complex and its socially-given labels. We express this identification when we say phrases like, ‘I am young’, ‘I am tall’, ‘I am angry’. The identifiers ‘young’, ‘tall’, ‘angry’ which make up our apparent identity, are subject to change; these are all temporary objects of experience. Instead it is the subject of experience, the experiencer, the ‘I am’, which is important to the spiritual seeker. The experiencer, the one with whom these various labels are identified, is the ‘I am’. This is referred to as the ‘self’ or ātman (consciousness, awareness, knowing); it is never subject to change (and thus at rest) since it is present in every experience (and therefore permanent). On realising one’s own essential nature, one’s apparent nature as a person does not disappear, contrary to popular conjecture, which is why it is less accurate to speak of dissolving the ego. Instead, its status is relegated since one’s apparent nature is temporary; it is subordinate to the permanent self. There are a number of ways that spiritual awakening can be attained, and these are outlined in the Bhagavad Gītā.

The Bhagavad Gītā and yoga

The Bhagavad Gītā, perhaps the most renowned scripture of the Hindus, is a yoga shastra. This is a treatise on how to be yoked, that is, how ‘to control’ or ‘to unite’ with a view to being spiritually awakened. Being spiritually awakened means to arrive at a state of sahaja (inner stillness) where the mind is made calm and one comes to rest within. An awakened person continues to act in the world but is undisturbed by what is happening in it. Such a yoked individual is no longer a servant of the senses that long to be incessantly satisfied, but their master. 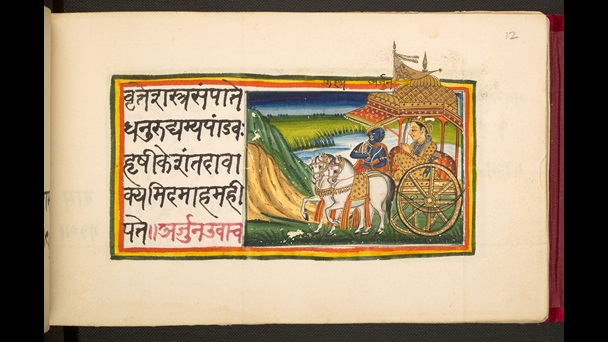 Krishna and Arjuna approaching the Kurukshetra battlefield, from a Bhagavad Gīta manuscript.

The Bhagavad Gītā describes four ways to achieve this. There is the path of jnāna yoga (self-inquiry), karma yoga (action), dhyāna yoga (meditation) and bhakti yoga. Jnāna yoga involves coming to the knowledge of one’s true nature as consciousness and not the ego. Karma yoga suggests that one’s focus should be on doing one’s duty without any self-motivated concern for the fruits of actions. Dhyāna yoga is where one brings one’s attention within oneself to still the mind. Bhakti yoga is where the spiritual seeker surrenders in complete devotion to their Beloved, thus abandoning ego. Some devotees seek liberation from saṃsāra (the cycle of birth, death and rebirth) and some engage in bhakti for nothing other than love for their Beloved; they are content with the experience of bhakti itself. This is the highest level of bhakti.

All of the four yogas enable the seeker to diminish the autonomy of their ego, the consequence of which is becoming yoked and identifying with one’s essential nature.

All practitioners of bhakti advocate the importance of japa (repeatedly uttering) or smarana (remembering) of the Name of the Beloved as a technique for escaping sansāra. In addition, the divine Name can be used in meditation since one’s focus needs to be pulled away from thoughts and be allowed to return to rest in its source – consciousness. This can be done by using an anchor, either the ‘third eye’ (the region between the eyebrows), a word, the flow of breath, the region of the heart or any of the seven chakras (energy centres in the body). One notable anchor is a mantra or a sacred formula: this can be a syllable, a word or a phrase, including the divine Name. When this mantra is recited throughout the day as one pursues one’s daily tasks, one’s attention is allowed to hook onto the anchor. This is therefore, meditation in the waking state. In the eyes of the devotee, the added benefit of the anchor being the divine Name is that one may remember the Lord incessantly, increase the bhakti within, and facilitate that sense of surrender to the will of the Absolute.

The most common way that Hindus express their bhakti is in front of an image or mūrti (form) of their deity. This may be engaged in periodically, such as in the morning or at night during pūjā (ritual veneration) at home, or whenever one visits the mandir (temple). The pūjā involves waving a lighted lamp, which is a common Hindu manner of honouring someone or something, while flowers are thrown upon the deity. This is accompanied by a recitation of verses eulogising the deity. In a mandir, a pūjārī will usually recite in Sanskrit; at home, the devotee performs pūjā in the manner of their family customs. Singing of bhajans (hymns or devotional songs) may also aid the experience of bhakti. This form of bhakti expresses a devotional acknowledgement of the divinity of the deity, and sometimes gratitude. At times, some devotees ask for a particular wish to be fulfilled; such engagement is not for spiritual transcendence but for material welfare. 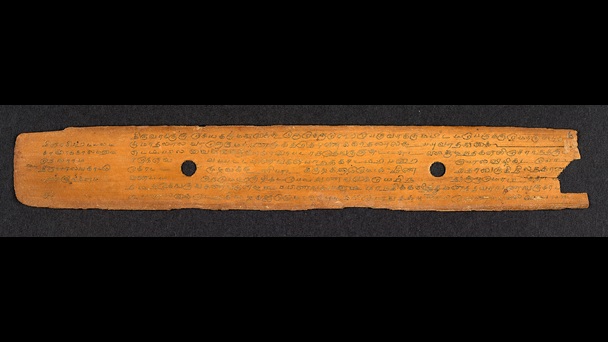 A palm leaf manuscript containing a compilation of Tamil Śaiva bhakti hymns (Tēvāram) from the 6th–8th centuries that are sung as part of Hindu worship.

Mūrti pūjā is often pejoratively translated as idol worship or the worship of statues, rather than a veneration of the form which is what it literally translates to. Many Hindus argue that the statue is not the object of worship but an aid to worship, and while this holds true to some extent, the devotional sentiment may taken a step further. What the outsider sees is not what is in the mind and heart of the one who engages in mūrti pūjā. The bhakti expressed by the devotee is subjectively transformative in that the statue is not actually a statue. For the devotee, it is the very manifestation of their deity. The mūrti does not simply enable the devotee to focus, but to serve his or her Lord in person. To the outsider, this appears as the worship of carved stone, but just as one sees a loved one in a photograph and not the ink and paper used to create the image, the devotee sees through the material used to make the statue, and instead perceives his or her Lord alone.

With and without form

According to Hindu texts, īśvara exists as both saguna (with qualities and form) and nirguna (without qualities and form). Discussing the relationship between nirguna and saguna divinity raises the question of which aspect is the original one, and therefore whether one is subordinate to the other, or if they have the same status. Various Hindu groups have different perspectives on how the two facets are related. For the Gauḍīya tradition, the saguna aspect in the form of Krishna is the original, and the nirguna aspect is but divine effulgence emanating from Krishna’s form. For the Smārta or Dashanāmī tradition, the primordial facet is that without form (nirguna), and the aspect of divinity with form is Its manifestation. This tradition also holds all principal saguna forms to be equal facets of the nirguna. These forms are those of Vishnu, Shiva (also spelt Śiva), Durgā, Ganesha (also spelt Gaṇeśa) and Sūrya (the Sun). There is a third perspective that considers both saguna (which is usually of Vishnu, Shiva or Durgā depending on the tradition) and nirguna aspects to be equally primordial. 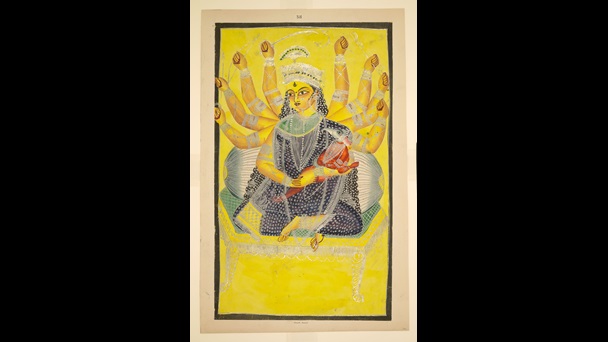 A Kalighat painting showing the goddess Pārvatī enthroned with the infant Ganesha in her arms. The painting dates to c.1865 and was produced by Indian artists for sale around the Kalighat temple in Kolkata, India.

When we look at the poetic compositions of the medieval bhaktas (devotees), we see that some orders and devotees have prioritised adoration to the nirguna while others to the saguna. For Vishnu’s devotees, the saguna forms are of Vishnu’s earthly avatars, notably Rāma and Krishna. However, this is not to say that for either type of bhakta, their devotion to their preferred facet excludes an acknowledgement that the other exists or is worthy of bhakti. They are simply more inclined to adore a particular aspect in preference to the other while recognising that the two aspects are two sides of the same coin. Therefore, rather than put these devotees in two seemingly distinct and strictly divided camps of nirguna bhakti and saguna bhakti as scholars have often done, we can say from the literary evidence that there is a spectrum with absolute nirguna bhakti on one side and absolute saguna bhakti on the other. In the medieval period, while Kabīr (1398–1448 or 1440–1518) is close to the nirguna end, Nānak (1469–1539) and his successors move a little away from him and accommodate more saguna devotion, even if they are primarily devotees of the nirguna. Namdev (1270–1350) is arguably in the middle of the spectrum. Tulsīdās (1532–1623) crosses the centre point and sits closer towards the saguna, whereas Chaitanya (1486–1533) and Mīrā (1498–1546/1547) may be arguably found on the saguna end itself. 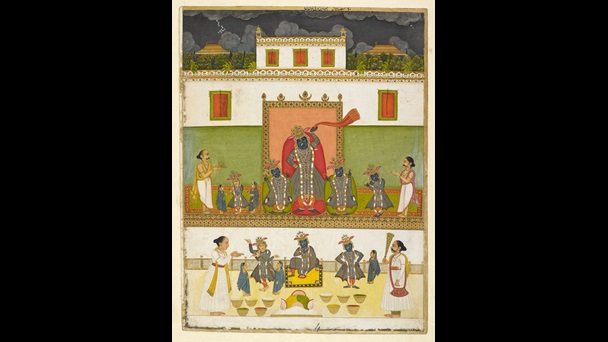 A painting shows Krishna in the form of Srinathji being worshipped and attended to by priests. Indian miniature watercolour painting, Northern India, later 18th century.

In spite of the difference in emphasis on the formless or with form, the one thing they all agree on is that the easiest and most effective way of attaining liberation is by remembering the divine Name at every moment since it remains with a person at all times, unlike other methods. In fact, Tulsīdās in his Rāmacaritmānas declares that greater than the nirguna and saguna aspects is the very Name of the Lord.

Not everyone is able to contend with the reasoned rigour of the path to self-realisation, whether this includes a component of meditation or not. Many, however, have considered bhakti to be the easiest path for self-realisation because love is an experience accessible to everyone.