Contemporary Paganism in the UK

Although not focused on a sacred text in a traditional sense, Professor Denise Cush looks at modern paganism, its practices and values, and the role of nature as the Pagan ‘sacred text’.

‘Paganism’ is used here as an umbrella term for a variety of traditions including Druidry, Wicca, Goddess spirituality, shamanism and animism. Reconstructionist groups such as Heathens, who seek to revive Norse religion, are sometimes included under the heading. Paganism is growing in popularity in the UK, and Pagan themes and motifs are frequently found in contemporary culture, reaching far beyond those who would consciously label themselves as Pagan. Although not focussed on a sacred text, this article takes the view that contemporary Paganism is mostly a recent creation, and that it is indicative of a wider trend within the changing religious landscape. The sociologists Paul Heelas and Linda Woodhead have referred to this as a ‘spiritual revolution’.[1]

This ‘new religiosity’, including Paganism, is more personal than traditional religions, and individual experience is the main source of authority. Several traditions are drawn upon (many Pagans talk, for example, about karma, and may include deities from different pantheons in their practice). There is not so much stress on creeds, doctrines, beliefs or metaphysical truth claims, and more emphasis on rituals, stories and mythology. There is a tendency to be the opposite of dogmatic, including in the ethical realm – the Wiccan Rede (counsel) ‘an it harm none, do what thou wilt’ (though sounding archaic, probably coined in the 1960s) being a typical example. Groups tend to be connected networks rather than institutions, and many focus on the divine immanent in nature, linking with concerns about the planet. New rituals, stories and even deities can be created to suit contemporary needs.

The two most influential forms of Paganism in Britain today are Wicca and Druidry, both of which have various subgroups, and, although drawing upon some elements of older traditions, they are substantially creations of the 20th century. Wicca can claim to be the one religion which originated in Britain (traced back to Gerald Gardner in the 1950s), and Druidry also places much emphasis on British land and heritage. Developing at the same time and among similar circles, Wicca and Druidry (as well as other forms such as Goddess spirituality) have much in common, and it does make some sense to talk of a generic ‘Paganism’.

Nature as the sacred text

Perhaps the central and distinctive feature of Paganism is the sacredness of the natural world, making it particularly appropriate for a society facing a human-created climate emergency which could lead to the extinction of many species, including ourselves. It could be said that the sacred text of Paganism is not a holy book but the natural world itself. Pagans may be pantheists, polytheists, animists or even atheists but they are united in finding the divine within nature, rather than beyond it. For many followers of Goddess spirituality, the Goddess IS nature, an immanent rather than transcendent deity, not a female version of the God of Abrahamic traditions. Pagans stress the interconnectedness of all life and seek to live in harmony with nature, viewing the current environmental crisis as a result of humans considering themselves separate from and superior to the rest of life. Pagan rituals often take place outside among trees, on hilltops, near ancient stone circles, by streams or waterfalls. Humans are a part of an interconnected community of all life, including all other-than-human beings, whether these are animals, spirits or deities, and actions and lifestyles should reflect this. 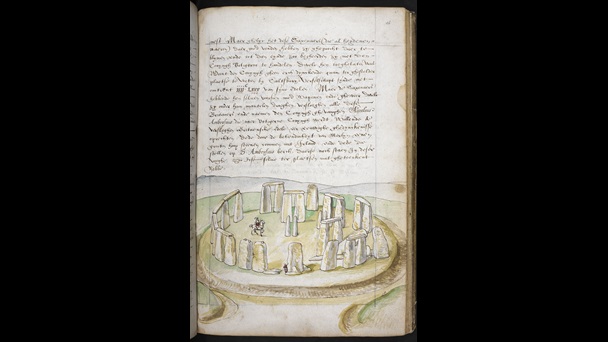 This is one of the oldest depictions of Stonehenge in existence, and the first to have been drawn on site. Stonehenge is a stone circle in Wiltshire, England.

Sociologists such as Max Weber spoke of the ‘disenchantment’ of the world brought about by modernity, science and industrialisation. Paganism seeks to ‘re-enchant’ the world and restore the sense of awe, wonder and magic. This may sound romantic (and much Paganism is definitely influenced by Romanticism), but this deep emotional connection with nature is a resource for environmental activism, and Pagans have been at the forefront of many protests and campaigns. Many Pagans are vegetarian or vegan to avoid harming animals or exploiting them in any way, whereas others think eating meat is natural but that we should be fully aware of and thankful for the life that has been sacrificed to give us nourishment.

Paganism does not focus much on beliefs or metaphysical truth claims and there is no creed or list of doctrines to which one must assent. Generally, it is up to the individual, and there is a positive welcoming of diversity and pluralism. However, there are a number of shared themes, and these may be spelt out in more detail at the level of particular groups.

Some Pagans are polytheist, with a pantheon of deities; Wiccans talk of the Goddess and the male God; others are more pantheist and talk of the divine energy within all things. Often, as in Goddess spirituality, polytheism and pantheism are reconciled – the many goddesses are, at a deeper level, aspects of the one Goddess. What tends to be rejected is the idea of a deity beyond and separate from the natural world.

There is a spectrum of views as to how far deities are ‘real’ or a form of colourful poetic or metaphorical language used to express spiritual experience. It is thus possible to be a Pagan atheist, accepting religion as a useful human creation. Experience, both everyday life and the more numinous/mystical/magical is central. While the idea of ‘revelation’ as found in Abrahamic traditions (communication between a transcendent deity and a prophet or messenger, often eventually written down as a sacred text) is not really found in Paganism, there is talk of ‘inspiration’ and insights gained from interaction with animals, plants, spirits and deities or what Druids call ‘awen’, the creative force flowing through all nature.

Pagans have various views of life after death, such as reincarnation, or the otherworld of the spirits, or the Summerland, or union with the divine life-energy. Other Pagans believe that there is no life after death and that we should concentrate on living this life on earth.

Ritual is very important in most Pagan practice, and can be simple and spontaneous or a scripted performance. Some practices in some traditions are only for the initiated, but many others are open to all. They may all be described as magic(k), which can be defined as the use of symbolic action to bring about change or transformation. This transformation can be understood either as in external reality, or in our own consciousness, or in both, as for example in healing.

Many Wiccan and Druid rituals involve casting a circle, establishing the four directions and the elements of fire, water, earth and air, and inviting the presence of deities or positive energies. Many rituals are designed by participants or adapted from existing sources to suit the particular occasion. There are lifecycle rituals for events such as welcoming new babies, funerals and weddings (‘handfasting’), the latter becoming popular even with people who don’t identify as Pagan. The cycle of eight festivals, found in Wicca, Druidry and Goddess spirituality is well known beyond Pagan circles: Samhain, Yule, Imbolc, Spring Equinox, Beltane, Summer Solstice, Lughnasadh and Autumn Equinox. Symbols include the pentagram/pentacle and the Druid ‘awen’. Stories and mythology are very important for Pagans and may be used in rituals, whether taken from traditional texts such as the Welsh Mabinogion, 19th-/20th-century literature, or more recent sources. Some local folk customs (often not as ancient as is sometimes believed) have gained a more Pagan feel in recent years. An interesting example of the use of Pagan ritual beyond Pagan circles is that words from a ceremony composed by Druids Philip Shallcrass and Emma Restall Orr for an inter-faith gathering at Avebury in 1993 were used for the closing ceremony of the Paralympics in London in 2012; the slightly adapted version being:

The circle is unbroken,
The ancestors awoken.
May the songs of the Earth
and of her people ring true.
Hail to the Festival of the flame
of root and branch, tooth and claw,
fur and feather, of earth and sea and sky.[2]

Generally, there is a life-affirming attitude, celebrating nature, the human body, sexuality and freedom. The approach to ethics is summed up by the Wiccan Rede – but living without fixed rules can be quite challenging as it involves making constant judgements about what is the least harmful course of action in each context. Important ethical issues for Pagans include environmental concerns, equality and diversity and social justice, and Pagan theologians and philosophers are starting to explore Pagan ethics in more detail.

Identifying as Pagan is becoming more acceptable than it was in the middle of the previous century, and there are Pagan schoolteachers and members of the police force. The Pagan Federation joined the Religious Education Council in 2011 and the Inter-Faith Network in 2015. However, there is still something of a ‘countercultural’ feel about Pagan identity, stemming in part from its association with witchcraft (illegal until 1951), the ‘hippies’ of the 1960s and various anti-war and environmental protests. Women find the stress on Goddess(es) and the roles of witch or priestess empowering compared to the patriarchal attitudes of many older religions, and those who identify as lesbian, gay, bisexual or transgender generally feel welcome among Pagans. Young people identifying as witches or Pagans interviewed by the author found in Pagan identity a source of self-esteem and a vocabulary with which to interpret their experience. They also found that Pagan rituals gave them a sense of control and thus reduced anxiety. Many Pagans talk about ‘coming home’, finding a name and a community that shares the views and feelings they already had. As a relatively new tradition, many first identified as Pagans as teenagers or adults, but as children are increasingly born into Pagan families, it will be interesting to see how the Pagan community (or rather communities plural) develops in the future.

For a more detailed account of contemporary Paganism, and a list of recommended books and websites, see https://www.reonline.org.uk/subject-knowledge/paganism/