The multiple gods and goddesses of Hinduism are a distinctive feature of the religion. However, Professor Julius Lipner explains that Hinduism cannot be considered polytheistic and discusses the way in which Hindu culture and sacred texts conceptualise the deities, as well as their role in devotional faith.

One of the most striking features of Hinduism is the seemingly endless array of images of gods and goddesses, most with animal associates, that inhabit the colourful temples, and wayside shrines and homes of its adherents. Because of this, Hinduism has been called an idolatrous and polytheistic religion. How are we to understand the concept of deity in Hinduism and its worship of images? In this essay, we shall take up this theme and also consider various forms of pilgrimage and prayer.

Hinduism can be likened to an enormous banyan tree extending itself through many centres of belief and practice which can be seen to link up with each other in various ways, like a great network that is one, yet many. The concepts of deity, worship and pilgrimage in Hinduism are a prime example of this ‘polycentric’ phenomenon.

What does the Veda say about deities?

Deities are a key feature of Hindu sacred texts. The Vedic texts describe many so-called gods and goddesses (devas and devīs) who personify various cosmic powers through fire, wind, sun, dawn, darkness, earth and so on. There is no firm evidence that these Vedic deities were worshipped by images; rather, they were summoned through the sacrificial ritual (yajña), with the deity Agni (fire) generally acting as intermediary, to bestow various boons to their supplicants on earth in exchange for homage and the ritual offering. Some Vedic texts speak of a One that seemed to undergird the plurality of these devas and devīs as their support and origin. In time, in the Upaniṣads, this One (Brahman) was envisaged as either the transcendent, supra-personal source of all change and differentiation in our world which would eventually dissolve back into the One, or as the supreme, personal Lord (īśvara) who was the mainstay and goal of all finite being. In both conceptions, we have the basis for subsequent notions of a transcendent reality that is accessible to humans by meditation and/or prayer and worship.

When did personal gods develop in Hinduism?

It is in the Bhagavad Gītā, composed at about the beginning of the Common Era, that we first find sustained textual evidence of developed thinking about devotional faith in a personal God, named Krishna (also spelt Kṛṣṇa). In this text, Krishna teaches his friend and disciple, Arjuna, about his divine nature and relationship with the world, and how the devoted soul can find liberation (mokṣa) from the sorrows and limitations of life through loving communion with him. Here, also for the first time in Hinduism, we encounter the doctrine of the avatāra (anglicised as avatar), which teaches that the Supreme Being descends periodically into the world in embodied form for, according to the Gītā, ‘re-establishing dharma, protecting the virtuous and destroying the wicked.’ The doctrine of multiple avatars with their specific objectives was to develop subsequently over the centuries in various sacred texts, such as the Purāṇas.

Visnu and his ten avatars 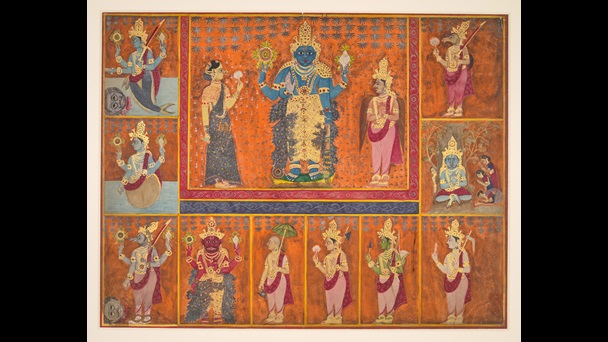 At about the same time as the Gītā was composed, the Śvetāśvatara Upaniṣad endorses devotion to Shiva (also spelt Śiva), also called Rudra, as the Supreme Being who transforms his devotees from the halter (pāśa) of existence into a state of profound union with him. Both the Gītā and the Śvetāśvatara Upaniṣad proclaim a form of disciplined devotion (bhakti) as the means to salvation, and it was not till about the 5th century that a theology of saving devotion to the Great Goddess (Mahādevī) appeared in the Devī Māhātmya. In a manner that accounts for the devotional faith of most Hindus, each of these three deities, Vishnu (also spelt Viṣṇu), Shiva, and the Goddess, under one alternative name or other, can be seen to head a distinctive strand of theistic Hinduism which inter-relates in complex ways with the other two. In terms of this interlocking grid, most Hindus would have a firm sense of religious belonging through faith in a Supreme Deity who can be approached, understood and worshipped by way of a system of disciplined belief and practice.

Shiva with Parvati and Nandi 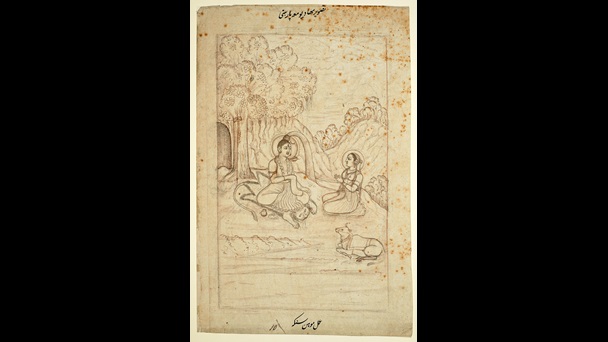 Is Hinduism a polytheistic religion?

It is important to grasp the distinctive way Hindus tend to approach their desired deity (iṣṭadevatā), usually a traditional feature of household or community worship, as the focus of their religious life. This deity, be it a form of Shiva, Vishnu or the Goddess, can normally manifest through multiple forms (rūpa). When speaking of worship of the great Goddess, the Kālikā Purāṇa (14th century) conveniently gives the model for the relationship between the chosen deity and its various forms: ‘Just as rays of the sun continually come forth from the sun’s disc so [the various forms of the Goddess] come forth from the body of the Goddess.’ This idea seems to be a conceptual development of the Vedic notion of the underlying One manifesting in and through the many: there is, ultimately, only one Supreme Source which can manifest, like rays of the sun, in alternative forms, each of which may indeed have its own tradition of narrative, belief and worship, but only as inter-linking with other centres of the whole. We can hardly call this ‘polytheism’ in the common sense of the term; it is, rather, a distinctive kind of ‘polymorphic’ monotheism, i.e. a monotheism underlying many manifestations of the same Deity – the whole relational web being a prime example of Hindu polycentrism at work.

When did the worship of deities begin?

The first archaeological evidence we have of standing temple construction and its implication of image-worship of the deity occurs in about the 3rd century BCE – of a Vishnu temple (in eastern Rajasthan) and of a Shiva temple not too far away. Presumably, since these were constructions of mud, timber, brick, stone etc., the process of temple-building had begun appreciably earlier, though we cannot say exactly where or when. We can also assume from textual and archaeological evidence that image-worship in Hinduism was present by about the 6th to the 5th century BCE.

It is generally believed (though there is mounting evidence against some external 'Aryan invasion') that people known as ancient Aryans had originally displaced an advanced civilisation in the north-western regions of the subcontinent called the Indus civilisation. Thre is evidence of brick structures, dating from this civilisation, that indicate a religious purpose and of small figures made of, and in, firm material such as terracotta and soapstone. However, since there is no agreement about how to interpret the script of the Indus civilisation, we cannot say for sure that these were truly figures of religious import, and thus had an influence on the fashioning later Hindu images.

How are deities worshiped?

By the first centuries of the Common Era, cults of the worship of images of various deities, such as Vishnu and the Goddess, were established. Such worship (pūjā) would have taken place both at home and in the temple. In time, temple design became ornate and varied, and temple-worship involved making the image according to strict iconographic rules and served by a dedicated class of priests, an elaborate ritual of consecration of the image, flower and food offerings, anointing and bathing the image, oil lamps, incense, bells and processions with the image, a daily programme for the deities involved patterned on practices of the royal court, and so on.

Album of images of Hindu deities 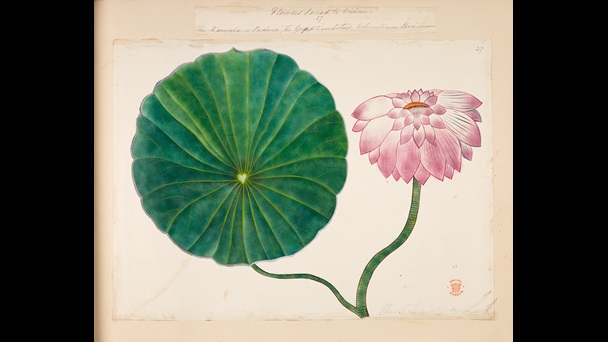 A botanical painting of the lotus flower (nelumbium speciosum) used in Temple worship as sacred to Lord Vishnu.

Most deities have an animal associate (vāhana) which helps identify the deity and express the latter’s specific powers; this was achieved too by an artistic device that attributed multiple body-parts, such as hands and heads, adorned by weapons and other objects, to the image. There are many stories, especially in the Purāṇas, which describe the origin and role of the vāhana and the weapons and other attributes associated with the image.

Album of images of Hindu deities 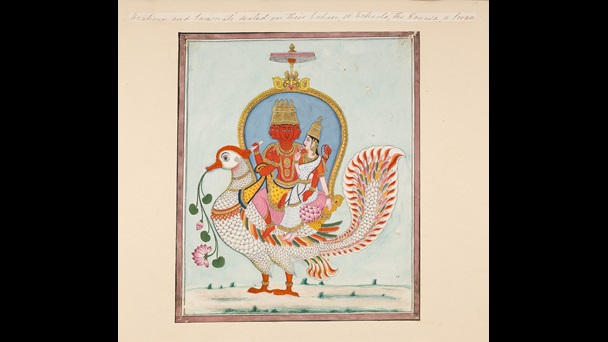 Lord Brahmā and Goddess Sarasvatī seated upon their vāhana (vehicle) the haṃsa (swan).

The temple itself was viewed as the body of the deity, with the darkened chamber at its heart in which (the image of) the deity was placed, known as the garbha-gṛha or ‘womb-house.’ This was the place in which the worshipper, who approached as humble supplicant, was reborn to a new lease of life by the grace of the deity.

Hindus tend to perceive the material of the consecrated image (arcā) as having undergone substantial change in the multiple earthly bodies of the deity itself, whose true, transcendent nature is really one and spiritual, consisting of pure consciousness, power and bliss. Here too we see that a complex relationship obtains between the One and the many. This cannot be dubbed ‘idolatry’ in any usually understood, derogatory sense. The point of the transcendent deity’s manifesting as the arcā, of appearing limited and powerless in many forms and places, is to express compassionate love and accessibility (saulabhya) on the deity’s part for the sake of the worshipper. Otherwise, as the Viṣṇudharmottara Purāṇa (ca. 6th–7th century) says, ‘what [else] can the image accomplish for the One who is always fulfilled?’ ‘Understand’, continues the Purāṇa, ‘that the purpose of His image-worship is the love of the worshipper’, that is, the divine love for the worshipper and the worshipper’s love for God.

Other than by forms of temple worship, which include both personal prayer and various rituals conducted by priests, the deity may be worshipped at home too, either through personal images, or family images handed down, or by way of meditation (dhyāna). Dhyāna can include highly specialised kinds of visualisation of the deity invoked, in which the deity is often envisaged as communicating with the worshipper.

Another form of worshipping the deity in Hinduism is through pilgrimage (yātrā). Pilgrimage is a way of creating a sacred landscape, of indicating that the whole world, including the pilgrim, belongs to the deity and is under its rulership. Through every pilgrimage, Hindus encounter a tīrtha, a sacred ford or crossing-point between heaven and earth, by which they may come to terms with this world of sorrows and arrive at the threshold of liberation. Over time, a great many tīrthas have developed across the Hindu sacred landscape. 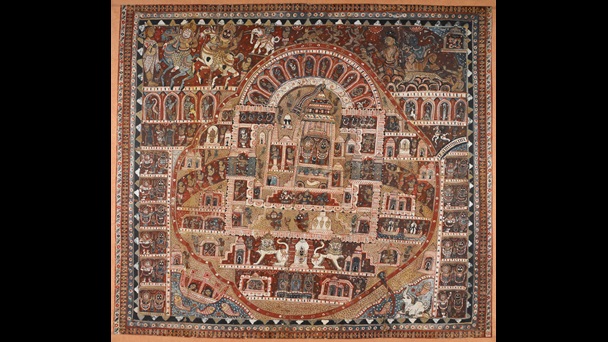 The Jagannath temple in the city of Puri, painting on cloth.