Barry Dov Walfish explains the development of biblical interpretation in Judaism, looking at key corpuses such as the Masorah, Targum and Midrash.

Judaism is a religion based on scripture and tradition, with a highly developed hermeneutical tradition. The Hebrew Bible has been studied assiduously from the time of its creation and subsequent canonisation (possibly in the 2nd century CE). Biblical interpretation began in the Bible itself, with newer texts often reacting to older ones or giving them new meanings.

What is the Masorah and who are the Masoretes?

A major concern of Jewish scholars was the preservation of the accuracy and integrity of the biblical text. Its earliest manuscripts, the Dead Sea Scrolls, dating from the 3rd century BCE to the 1st century CE, were written as straight consonantal text, without any punctuation or vocalisation, but with section breaks. This left considerable room for error and misinterpretation. In order to stabilise the text and preserve its integrity a group of scholars called Masoretes (from a root meaning ‘to hand down’ or ‘to count’), who were active between the 6th and 10th centuries, developed an elaborate system of signs which served the following purposes: (1) punctuation, to indicate where each verse ends; (2) vocalisation, to determine pronunciation; and (3) accentuation/cantillation, to indicate which syllable(s) should be stressed and to divide each verse into syntactic units. These symbols also served as musical notation for the purpose of cantillation, which is the oral tradition for chanting the Torah and certain other parts of the Bible (prophetic readings, Five Scrolls) in the synagogue during regular appointed times (especially the Sabbath and holidays). 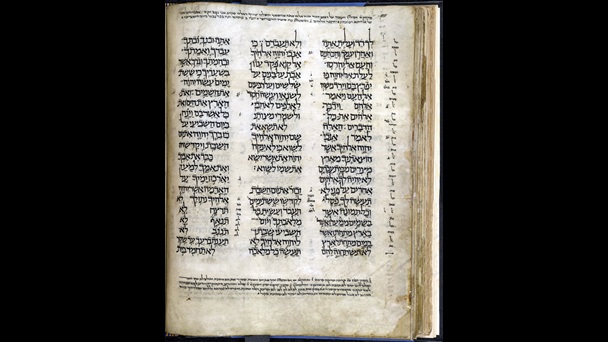 One of the oldest surviving Hebrew biblical codices. It is an early form of the Ben Asher masoretic text. Aaron Ben Asher, a 10th-century scholar from Tiberias, in the Holy Land, edited the most authoritative version of the Hebrew Bible.

In the later Middle Ages these masoretic notes were collected in separate codices and organised in alphabetical order. The medieval masoretic tradition reached its climax with the publication of the Great Rabbinic Bible, edited from various manuscripts by Jacob ben Hayyim Ibn Adonijah and published by Daniel Bomberg in Venice in 1524–1525. 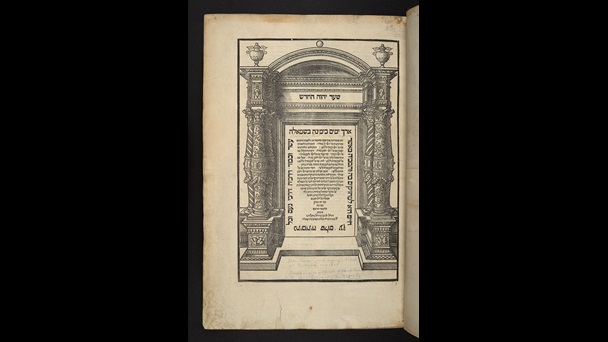 A first edition of the Second Rabbinic Bible (or Mikra’ot Gedolot in Hebrew), also known as the Great Rabbinic Bible, produced and edited by the Jewish scholar Jacob ben Hayyim ibn Adonijah and published by Daniel Bomberg in Venice.

What is a Targum?

A Targum (plural Targumim) is an Aramaic translation of a biblical book. Towards the end of the Second Temple period (1st century CE), Hebrew had ceased to be the spoken language in the land of Israel, having been replaced by Aramaic, the lingua franca of the region. Originally, the Aramaic translation was recited during the Torah reading in the synagogue to help the congregation understand the Hebrew text. Eventually, these Targumim were written down. The most famous Targum is that on the Torah attributed to the proselyte Onkelos (1st–2nd centuries CE). A 14th-century CE Pentateuch from Ashkenaz with Targum Onkelos and Rashi’s commentary.

In the rabbinic period (2nd–6th centuries CE), rabbis developed a method of biblical interpretation termed Midrash from the Hebrew root meaning ‘to seek or inquire’. The rabbinic approach was characterised by what has been termed ‘omnisignificance’, meaning that the rabbis, out of reverence for the sacred text, plumbed every detail for meaning and significance, taking note of unusual terms and expressions, or repetitions of words or themes. Folk etymologies were devised to explain the meanings of names of people or places, and there was a strong tendency to fill in gaps in the narrative and identify anonymous characters. Throughout the first millennium, works of Midrash were gathered into books (Midrashim), which were arranged like commentaries on the various biblical books. Other compilations were based on sermons delivered in public, which were later written down. In most cases, especially the earlier ones, the names of the compilers are not known. Tradition distinguishes between legal (halakhic) Midrashim, which elucidate the law and its application, and homiletic (aggadic) Midrashim, which focus on interpreting and expanding the biblical narratives, as well as deriving moral and spiritual lessons from the biblical text.

How are Bible commentaries different from Midrash?

In the 8th–9th centuries Jewish scholars in Islamic lands, primarily Palestine, Babylonia and North Africa, came under the influence of Islamic thinkers and Arabic grammarians. They began producing Judeo-Arabic paraphrases and glossaries of biblical texts, which eventually, by the late 9th century, gave birth to the commentary genre. The first authors were Karaites, members of a recently established scripturalist sect, but soon mainstream Rabbanites were following suit and the genre further developed and flourished in Islamic Spain between the 10th and 12th centuries. Unlike Midrashim, which were compilations of mostly anonymous oral traditions, commentaries bore a distinct authorial stamp. Drawing on the emerging fields of biblical Hebrew grammar and lexicography, this school was characterised by attention to the meaning of the words as understood in their proper grammatical forms, comparing words of the same root and making use of cognate languages, especially Aramaic and Arabic, to elucidate difficult words. Rather than focussing solely on what the words of the text meant for readers in their own time, exegetes also showed an interest in what the text meant for the original authors and their audiences. Many of these exegetes were also influenced by contemporary philosophical systems (e.g., Kalam, Neoplatonism, Aristotelianism).

The work of the Spanish school during its golden age culminated with the exegetical enterprise of Abraham Ibn Ezra (1089–1164). Ibn Ezra’s commentaries were built on the foundations of grammar and reason. He distilled the teachings of the great Spanish grammarians and applied them to his exegesis. He also drew on the works of Neoplatonist philosophers. While he respected reason and the rules of grammar, when there was a clash between reason and rabbinic tradition, he deferred to the latter. 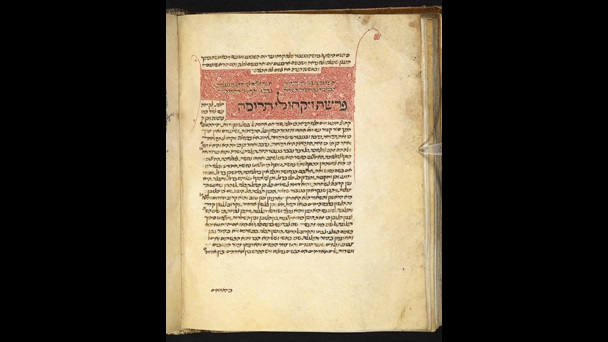 A 15th-century manuscript copy of Abraham Ibn Ezra’s commentary to the Torah.

During the same period, similar trends were emerging in northern France and Ashkenaz (German-speaking) lands. Ashkenazic exegetes were not as well-versed in Hebrew grammar, knowing very little of the works of their Spanish grammarian brethren. Nevertheless they too developed a taste for what they came to call peshat interpretation, which tried to explain the biblical text in its context, and rejected many of the midrashic comments of the rabbis, which took too many liberties with the text. The first and most famous member of this school of exegetes was Solomon ben Isaac, known as Rashi (1040–1105), who lived most of his life in Troyes, France. Rashi commented on almost the entire Bible, but is best known for his commentary on the Torah, which has attained quasi-canonical status. Rashi was the first exegete from this region to introduce grammatical comments in his commentaries.

Pentateuch with a commentary by Rashi 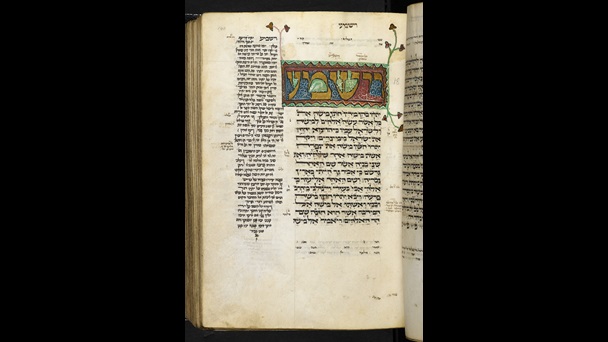 A 14th-century codex of the Pentateuch, complete with Rashi’s commentary.

While his Torah commentary is still heavily laden with midrashic comments, he claims to have made efforts to include only those Midrashim that do not stray excessively from the plain meaning. In actual fact, Rashi’s use of Midrash is weighted towards comments with a spiritual, moral or pedagogical message. Though his work was not universally accepted at first, Rashi eventually became the most revered exegete in Jewish history and his commentaries are still studied assiduously by engaged Jews of all persuasions. In the generations that followed Rashi, in the 12th–13th centuries, the trend to ever greater contextualisation of the Hebrew Bible continued. It culminated in the work of Rashi’s grandson Samuel ben Meir, known as Rashbam (1085–1158), the greatest representative of the peshat school. However, by the mid-13th century, this trend had all but died out, and Rashbam’s Torah commentary, which is studied with great interest by Bible scholars today, survived in only one manuscript.

The third exegete which will we mention in this very brief survey, is Moses ben Naḥman, or Naḥmanides (c. 1194–1270), a Catalonian talmudist, kabbalist and highly regarded communal leader. Though he lived in Christian Spain and he felt himself to be continuing the Spanish Andalusian tradition of peshat exegesis, at the same time he was also a student of Rashi and cited his works extensively, and sometimes critically. Naḥmanides was thus a synthetic figure whose exegesis combined threads from both the philological school of Ibn Ezra and the work of Rashi, which was still heavily indebted to the rabbinic tradition. In addition, he also enriched his commentaries with theology, mysticism, ethics and deep insight into the characters of the biblical narratives. He also made use of typology, a rare occurrence in medieval Jewish exegesis, interpreting the deeds and travels of the Patriarchs as foreshadowing events in subsequent Jewish history.

Nahmanides' Commentary on the Pentateuch 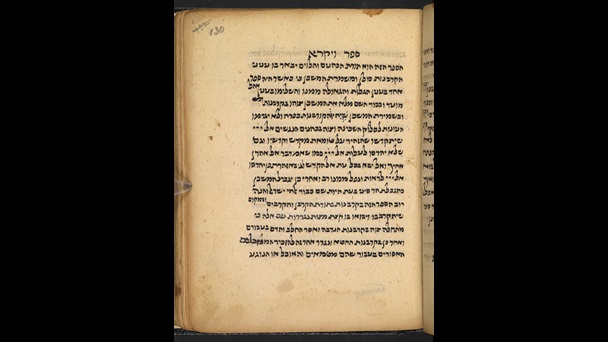 A 15th-century manuscript copy of the commentary on the Pentateuch by Nahmanides.

The triumvirate of Rashi, Ibn Ezra and Naḥmanides are considered the greatest medieval exegetes and they have maintained their popularity through the centuries. With the advent of print their commentaries, among others, came to populate the pages of rabbinic Bibles, which were studied avidly by scholars and laymen alike. Indeed, the medieval exegetes are still very popular and their works are still being translated and edited in new editions to this very day.

The modern period in Jewish biblical interpretation can be said to begin with the German philosopher and scholar Moses Mendelssohn (1729–1786), who spearheaded a project to produce a complete Judeo-German translation and Hebrew commentary of the Bible, called the bi’ur. This proved to be very popular in Germany throughout the 19th century and went through many editions. With the advent of biblical criticism and the challenge it presented to the doctrines of Mosaic authorship of the Torah and the Dual-Torah (the belief that an Oral Torah was given to Moses along with the written one and embodied its authoritative interpretation), scholars reacted with commentaries intended to buttress the traditional views. In the 20th century, many Jewish scholars have entered the mainstream of biblical studies and have written commentaries on biblical books for ecumenical scholarly series such as the Anchor Bible. A Jewish commentary series, which is both scholarly and critical and incorporates the best of the Jewish exegetical tradition, is being published by the Jewish Publication Society in Philadelphia. The three main denominations of Judaism (Orthodox, Conservative and Reform) have also produced one-volume Torah commentaries for use in synagogues to accompany the public reading of the Torah, each reflecting its denomination’s ideology and relation to sacred scripture.