Origins and development of Sikh faith: The Gurus

Gurus are central to the Sikh faith. Eleanor Nesbitt looks at the founder of the Sikh faith – Guru Nanak, the concept of Guru in Sikhism, the central principles of the Gurus’ teachings and the sacred scripture – the Guru Granth Sahib.

There are currently about 24 million Sikhs worldwide. The majority live in the Indian state of Punjab. They regard Guru Nanak (1469–1539) as the founder of their faith and Guru Gobind Singh (1666–1708), the tenth Guru, as the Guru who formalised their religion. Religions and religious teachers do not exist in a vacuum: India, in the Gurus’ time, was ruled by Mughal emperors who were Muslim. Punjabi society was a mix of Muslims and Hindus.

The Sikh religion has evolved from the Gurus’ teachings, and from their followers’ devotion, into a world religion with its own scripture, code of discipline, gurdwaras (places of worship), festivals and life cycle rites and Sikhs share in a strong sense of identity and celebrate their distinctive history.

A central principle of the Gurus’ teaching is the importance of integrating spirituality with carrying out one’s responsibilities. Sikhs should perform seva (voluntary service of others) while at the same time practising simaran (remembrance of God). The ideal is to be a sant sipahi (warrior saint) i.e. a person who combines spiritual qualities with a readiness for courageous action. Guru Nanak, the first Guru, and Guru Gobind Singh, the tenth Guru, continue to feature prominently in Sikhs’ experience of their religion.

Who was Guru Nanak?

Guru Nanak was born in 1469 in Talvandi, a place now renamed Nankana Sahib, in the state of Punjab in present-day Pakistan. His parents were Hindus and they were Khatri by caste, which meant that they had a family tradition of account-keeping. The name ‘Nanak’, like Nanaki, his sister’s name, may indicate that they were born in their mother’s parents’ home, known in Punjabi as their nanake. Guru Nanak’s wife was called Sulakhani and she bore two sons. Until a life-changing religious experience, Nanak was employed as a store keeper for the local Muslim governor.

One day, when he was about thirty, he experienced being swept into God’s presence, while he was having his daily bath in the river. The result was that he gave away his possessions and began his life’s work of communicating his spiritual insights. This he did by composing poetic compositions which he sang to the accompaniment of a rabab, the stringed instrument that his Muslim travelling companion, Mardana, played. After travelling extensively Guru Nanak settled down, gathering a community of disciples (Sikhs) around him, in a place known as Kartarpur (‘Creator Town’). 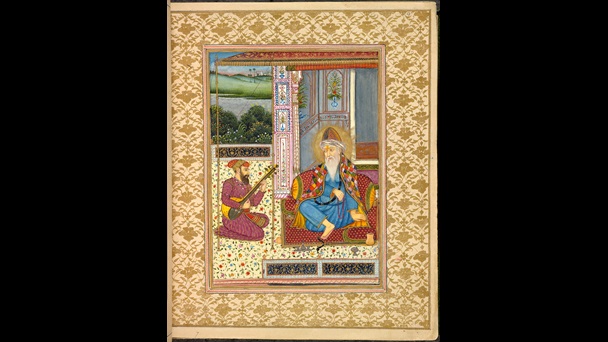 A portrait of Guru Nanak (1469–1539), the first Sikh Guru. Traditional gouache and gold on paper.

Guru Nanak’s poems (or shabads) in the Guru Granth Sahib (scripture) give a clear sense of his awareness of there being one supreme reality (ik oankar) behind the world’s many phenomena. His shabads emphasise the need for integrity rather than outward displays of being religious, plus the importance of being mindful of God’s name (nam) and being generous to others through dan (pronounced like the English word ‘darn’) i.e. giving to others. His poems are rich in word-pictures of animals and birds and human activities such as farming and commerce.

The British Library holds a number of lithographs and manuscripts of much-loved stories of Guru Nanak’s life; these include the Vilaitvali Janam-sakhi and the more famous, beautifully illustrated B40 Janam-sakhi. (The word ‘janam’ means birth and ‘sakhi’ means testimony or evidence.) Some of the events recounted in the Janam-sakhis are miracles, despite the fact that Guru Nanak and his successors criticised miracle-working. The stories are written in such a way as to glorify the Guru; the anecdotes often convey a deeper message: for instance when Nanak asked a rich man to take a needle to heaven for him, so showing the futility of accumulating wealth. 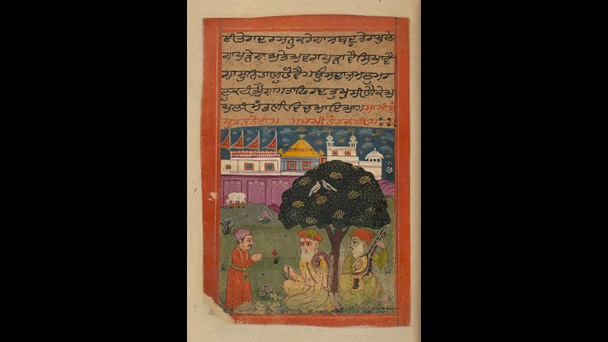 Guru Nanak is seated under a tree with his travelling companion Mardana; standing before them is a rich money-lender whom the Guru had entrusted with a needle, requesting that it be returned to him in heaven. Having understood the futility of amassing wealth, the money-lender is shown with hands joined in supplication as he begs for the Guru’s forgiveness.

Guru Nanak’s importance results not just from his inspirational teaching but also from the practical basis he provided for a new religious movement: he established a community of his followers in Kartarpur and he appointed a successor, Guru Angad, on the basis of his devoted service. Guru Nanak is respected as ‘Baba Nanak’ by Punjabi Muslims as well as by Sikhs and Punjabi Hindus.

Each year Sikhs celebrate his birthday on the day of the full moon in November. Like other gurpurabs (festivals commemorating a Guru) it is marked by an akhand path (pronounced like ‘part’), a 48-hour, continuous, complete reading of the Guru Granth Sahib which ends on the festival morning. Commemorative events in 2019 celebrated the 550th anniversary of Guru Nanak’s birth.

What is the concept of Guru in Sikhism?

At first Nanak was called ‘Baba Nanak’, with ‘Baba’ being an affectionate term, like ‘grandfather’, for an older man. These days he is better known as Guru Nanak. Just as the word ‘Sikh’ means learner, so ‘Guru’ means teacher. Sikhs explain ‘Guru’ as meaning ‘remover of darkness’. The Gurmukhi script that is used for the Punjabi language has no capital letters, but in English the correct practice is to use a capital ‘G’ for Guru in the Sikh sense. There have been just ten human Gurus. Their lives spanned the period from Nanak’s birth in 1469 to the passing away of Guru Gobind Singh in 1708. Since then the Sikhs’ living Guru has been the Guru Granth Sahib, the sacred volume of scripture. The Guru Granth Sahib is much more than a book: it is believed to embody the Guru as well as containing compositions by six of the ten Gurus. The preeminent Guru (Nanak’s Guru) is God, whose many names include ‘Satguru’ (the true Guru) and ‘Waheguru’ (a name which began as an exclamation of praise).

Sikhs believe that all ten human Gurus embodied the same spirit of Guruship and that their different styles were appropriate to the differing circumstances in which they lived. Guru Nanak’s first four successors, Guru Angad Dev, Guru Amar Das, Guru Ram Das and Guru Arjan Dev, were also poets. Their compositions, together with Guru Nanak’s, became the basis of the Guru Granth Sahib. While their spiritual emphasis seamlessly continued Guru Nanak’s, each made a distinctive contribution to Sikh community life. Guru Angad formalised the Gurmukhi script in which the scripture is written. It was almost certainly developed from the shorthand that accountants used for keeping their accounts, as a simpler version of the script that is still used for the older language of Sanskrit.

Guru Amar Das made the langar a key feature of Sikh life: a shared vegetarian meal eaten by people of all ranks sitting together regardless of their social status. His other innovations included setting up a Sikh place of pilgrimage and appointing preachers to lead local Sikh congregations. His son-in-law and successor, Guru Ram Das appointed stewards-cum-missionaries to organise worship and collect offerings and he started the settlement which in due course was renamed Amritsar. Its name, meaning the pool of immortality, referred to the pool associated with the temple, Harmandir Sahib, that was completed in the time of the fifth Guru, Guru Arjan Dev. In 1604 Guru Arjan Dev installed in Harmandir Sahib the volume of scripture, his compilation of the poems of the first five Gurus plus works by other spiritual poets such as Kabir.

Guru Arjan Dev is also remembered as the first Sikh martyr. Following his death, the sixth Guru, his son Har Gobind, became a military leader. Similarly, the tenth Guru, Guru Gobind Rai, whose father Guru Tegh Bahadar is also remembered as a martyr, assumed a high military profile. The seventh, eighth and ninth Gurus, Guru Har Rai, Guru Har Krishan and Guru Tegh Bahadar, were not military leaders – in fact Guru Har Krishan passed away as a child. Guru Tegh Bahadar championed the brahmins of Kashmir who had appealed to him for help. He was put to death when he refused to become a Muslim.

According to tradition, Guru Gobind Rai became Guru Gobind Singh in 1699, when he called his followers together and initiated five men who volunteered their lives for him. These five (known as panj piare or five beloved ones), and all Sikhs who have been initiated in a similar way in the years since, make up the Khalsa, the community that owes its allegiance to the Guru. Guru Gobind Singh received the amrit (holy water of initiation) from the panj piare and, like them, took the name ‘Singh’ (lion) in place of his earlier name. 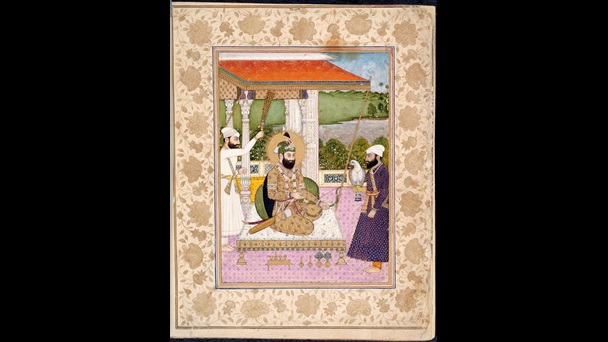 A portrait of Guru Gobind Singh (1666–1708), the last in a lineage of ten human Gurus under which Sikhism flourished.

Khalsa initiates (known as amritdhari Sikhs) accept a daily discipline which includes having five identifying marks (the ‘five Ks): kes (hair i.e. not allowing hair or beard to be shortened or removed), kirpan (sword), kachha (shorts – usually nowadays worn under one’s outer clothing), kangha (comb) and kara (iron or steel bangle). Female initiates take the name ‘Kaur’ (literally ‘prince’). In practice, many Sikh parents give their children the names ‘Singh’ and ‘Kaur’, so these names do not mean that someone has been initiated.

Guru Gobind Singh incorporated his father, Tegh Bahadar’s, hymns in the Sikh scripture. Shortly before his death, he instructed Sikhs to regard the Granth (volume) as their Guru – hence its respectful title, Guru Granth Sahib. Guru Gobind Singh himself was a poet and his compositions are in another volume, the Dasam Granth.