The Guru Granth Sahib plays an integral part in the lives of Sikhs. Eleanor Nesbitt describes the rituals that surround it and its role in the daily lives and life cycle rites of Sikhs, also exploring Sikh daily prayer, devotional songs and festivals.

Centrality of the Guru Granth Sahib

The Guru Granth Sahib is the sacred text of the Sikh community and the embodiment of the Guru. It is central to the lives of devout Sikhs, both in the sense of being physically present in the gurdwara and as Sikhs’ ultimate spiritual authority. Moreover, each day devout Sikhs hear or recite the scriptural passages that constitute their daily prayers and the Guru Granth Sahib also plays an integral part in life cycle rites and festivals.

As the Granth Sahib is Sikhs’ spiritual teacher, their Guru, it is honoured as a sovereign used to be, centuries ago in India. The 1430-page volume is enthroned under a canopy and it reposes on cushions on the palki (literally palanquin i.e. the special stand). An attendant waves a chauri above it when it is open and being read: the chauri is a fan consisting of yak tail hair set in a wooden handle. When not being read, the volume is covered by red and gold cloths known as rumalas, and in many gurdwaras, after the late evening prayer, it is ceremonially carried to a special bedroom where it is laid to rest.

Those Sikhs who keep the Guru Granth Sahib at home honour it in a room of its own. If a copy is temporarily housed in a Sikh’s home for the duration of a path (reading of the entire volume) strict rules are observed – for example no non-vegetarian food is kept or cooked. In other words, the house is temporarily a gurdwara.

Often the reading is an akhand path (continuous, 48-hour reading of the entire Guru Granth Sahib). Sikhs often arrange an akhand path to bless a new house or to mark a special birthday or other family event. Many families hold the akhand path in a gurdwara rather than at home. Either way, relays of readers are organised and the family provide free vegetarian hospitality (langar) for attendees.

Sikhs turn to the Guru Granth Sahib for guidance when they face a dilemma. The time-honoured method is for the volume to be opened at random and for the words of the hymn at the top of the left-hand page to be taken as the Guru’s response. This guidance is called a vak. A vak (also known as hukamnama i.e. order) is taken each day in all gurdwaras and the words are displayed for everyone to read.

Sikhs increasingly consult the Guru Granth Sahib via the internet: for example, online they can read or hear the daily hukamnama from Harmandir Sahib (the Golden Temple) in Amritsar and they can read and search their scripture’s original text or its translation. In the gurdwara the words are often projected, together with a translation, onto screens so that the sangat (congregation) can read verses while they are being spoken or sung.

In observant Sikh families a child’s name is chosen on the basis of a vak, as the first word of the hymn on the left-hand page provides the initial for the infant’s given name. So, if the first word began with ‘s’, names such as Sukhvinder, Satnam and Simran might be considered. Most Sikh forenames are unisex: in a boy’s case his name will be announced as, for example, ‘Satnam Singh’ while a girl would be ‘Satnam Kaur’.

The Guru Granth Sahib is literally at the heart of the rite of anand karaj (marriage), as – linked by a scarf that hangs over the groom’s right shoulder – the couple walk around it clockwise four times, with the groom leading the way and the bride following close behind him. She is helped on her way by her close male relatives. Before each round, the officiant reads one stanza of Guru Ram Das’s hymn entitled Lavan (Guru Granth Sahib, page 773) and the ragis (musicians) sing this again as the bridegroom precedes the bride around the palki. The stanzas of the Lavan evoke the progress of the human soul and the enthroned scripture is witness to the marriage. The service concludes with six verses of Anand Sahib (Guru Amar Das’s composition on pages 917-922 of Guru Granth Sahib), followed by the Ardas (congregational prayer) and a distribution of karah prasad (made from ghee, sugar, wheat flour and water).

At a Sikh’s funeral, the late evening prayers (kirtan sohilla) are recited and, following someone’s death, the entire Guru Granth Sahib is read over a period of up to ten days (this is known as a sahaj path or sadharan path). The ashes of the deceased person are immersed in a river – in many cases the river Satluj at the town of Kiratpur in north India.

Some Sikhs express their commitment to the Guru by being formally initiated into the Khalsa (the body of Sikhs who maintain a discipline that is attributed to the tenth Guru). They commit themselves to maintaining the ‘five Ks’ as indicators of their commitment. This is done by ‘taking amrit’ in a rite variously referred to as khande di pahul (initiation with the double-edged sword) and amrit chhakana. The word amrit (literally ‘deathless’) is used for the water of initiation. The khande di pahul rite is based on what is believed to have happened in 1699 when Guru Gobind Singh initiated five men who volunteered their lives to him. These men are known as the panj piare (five beloved ones) and this is the term that is used for the five amritdhari (initiated) Sikhs who conduct the amrit ceremony.

Passages from the Guru Granth Sahib are integral to the rite: initially each of the panj piare in turn recites the Japji (the opening hymn of the Guru Granth Sahib), followed by Guru Gobind Singh’s compositions: Jap, Savayye and Chaupai and then Guru Amar Das’s Anand, while using a khanda (double-edged sword) to stir the baptismal water, which has been sweetened with patasas (sugar sweets). The candidates next receive five palmfuls of the amrit to drink and it is sprinkled five times on their eyes and then on their hair. Then the panj piare and the initiates together repeat five times the Mul Mantar, the opening credal formula of the Guru Granth Sahib.

Guru Nanak emphasised that nam is central to life, together with snan (bathing) and dan (giving). Nam means ‘name’ in both Sanskrit and less ancient Indian languages: indeed, in many European languages too, the word for ‘name’ has hardly changed from its Indo-European origins (compare nomen, nom, nuome). In the Sikh religious context nam refers to the divine name – not just God’s name in the usual sense, however, but almost an encapsulation of God. For well over a hundred years, the Guru’s teaching has often been summarised as nam japo, kirat karo, vand chhako, meaning ‘repeat the name, do your work, and share what you earn’. The word japan (pronounced ‘jup – un’, meaning to repeat) and ‘simaran’ (pronounced ‘sim-run’, to remember) are used interchangeably for the practice of prolonged focus on God. This can involve repeating ‘Satnam Sri Vahiguru’, individually or with others, or it can be carried out by singing the shabads (compositions) in the Guru Granth Sahib or by listening attentively to them as the ragis sing them in the gurdwara congregation. 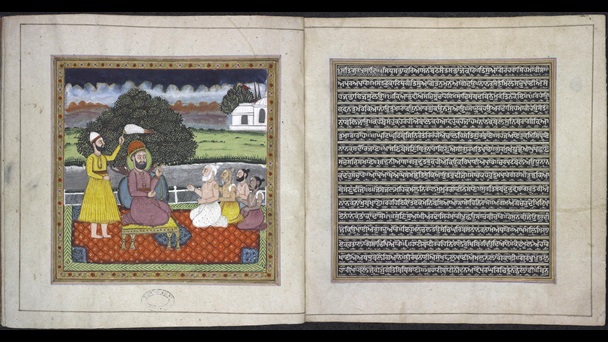 What are kirtan, shabad and katha?

Kirtan is corporate singing of devotional songs. Ragis (pronounced with a ‘hard ‘g’) are musicians who sing shabads (compositions, hymns) from the Guru Granth Sahib and they provide musical accompaniment by playing tabla and harmonium or (increasingly) the more traditional stringed instruments that were used before European missionaries introduced harmoniums into Punjab in the 19th century. Often in the gurdwara – especially at festival time – a giani (a Sikh recognised for his learning) offers a katha, an exposition of the shabads, for the sangat (congregation).

What are the Sikh festivals?

The Sikh religious calendar consists of melas (literally ‘fairs’) and gurpurabs (anniversaries of Gurus). The Vaisakhi festival in April is the most important mela, a commemoration of the founding of the Khalsa in 1699 at the first khande di pahul on what was already a spring harvest day in the calendar of Punjabi celebrations. Notable gurpurabs are the birthdays of Guru Nanak (celebrated on the day of the November full moon) and Guru Gobind Singh; the shahidi (martyrdom) days of Guru Arjan and Guru Teg Bahadar and the anniversary of the day when the Guru Granth Sahib was installed in the Harmandir Sahib.

Until recent years Sikh festivals were observed according to the north Indian Bikrami calendar. As most anniversaries were determined by the phase of the moon, the date would vary each year by the secular western calendar. In the 21st century many Sikhs instead follow the Nanakshahi calendar in which most festivals’ dates have a fixed date according to the secular calendar.

48 hours before the morning of the festival, an akhand path begins. On major festivals there is an extended kirtan in the gurdwara and, in some cities, Vaisakhi or the birthday of Guru Gobind Singh may be celebrated with a nagar kirtan. This means that the Guru Granth Sahib, duly enthroned and attended, is driven slowly through the streets. Panj piare, dressed in orange, blue or white, provide the vanguard and hundreds or thousands of Sikhs follow in joyful procession, while refreshments are offered to the walkers by volunteers along the route.