Eleanor Nesbitt explores Sikh gurdwaras, touching on the most notable ones, such as the Golden Temple, their common features and the principles of worship within them.

What is a gurdwara?

A gurdwara is a building in which Sikhs gather for congregational worship. However, wherever the Guru Granth Sahib is installed is a sacred place for Sikhs, whether this is a room in a private house or a gurdwara. The word is often translated as ‘doorway to the Guru’ and it means the place in which the Guru, embodied in the Guru Granth Sahib, is resident and honoured. In the 18th and 19th centuries the word gurdwara gradually replaced the earlier term ‘dharamsala’ for rooms used for religious purposes during the Gurus’ lifetimes.

There are gurdwaras in every country where Sikh communities have settled. In the UK alone there are probably about 300 gurdwaras. In the early years of Sikh settlement in the UK, rented premises served as gurdwaras. The next stage was to purchase a building and modify it for Sikh worship. An increasing number of gurdwaras are purpose-built, with architectural features inspired by historic gurdwaras in India.

Most of the Sikh historic gurdwaras are in north India though some are in Pakistan. (In the Gurus’ time, and until 1947, the Punjab region was not bisected by a national frontier, as Pakistan had not been created.) The architecture of major historic gurdwaras, involving fluted cupolas (gumbads), is influenced by Mughal style. Famous gurdwaras in Pakistan commemorate Guru Nanak’s life: in Nankana Sahib a gurdwara marks the place where he was born and at Kartarpur Sahib a gurdwara stands where he founded a settlement and (in 1539) passed away. Equally well-known is Panja Sahib gurdwara in Hasan Abdal (about 40 kilometres north-west of Islamabad), where a rock bears what is believed to be the imprint of Guru Nanak’s hand.

The title ‘sahib’ in the names of cities (e.g. Anandpur Sahib) and major gurdwaras expresses Sikhs’ reverence for locations associated with their Gurus’ lives.

Five notable gurdwaras in India are known as takhts: takht means throne or seat of authority.

The Akal Takht (‘throne of the Timeless One’) is in Amritsar (Punjab), facing the Harmandir Sahib (Golden Temple), and it is the highest seat of authority. The Akal Takht was first established by Guru Hargobind and the two nishan sahibs (pennants flying from flagpoles, honoured and clad in orange cloth) are a reminder of his two swords that signified the principle of miri piri (a balance of worldly and spiritual authority). 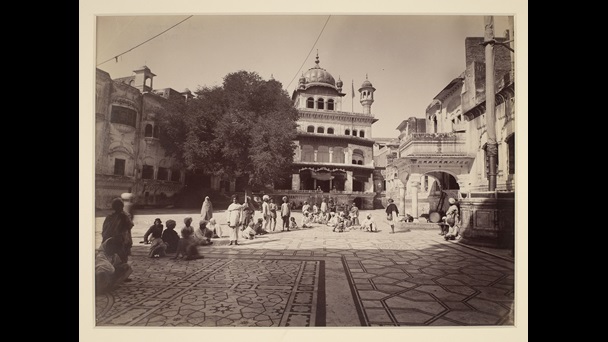 A 19th century photograph of the Great Square and the Akal Takht (‘Throne of the Timeless One’). Established by the sixth Guru Hargobind in the early 19th century, the Akal Takht is also known as Takht Sri Akal Bunga and represents Sikhism’s highest seat of temporal authority.

Many smaller, less well-known historic gurdwaras were established in other locations that the Gurus visited, and they mark, for example, the place where the Guru’s horse was tethered or where a miracle allegedly occurred.

The city of Amritsar is famous for Harmandir Sahib (also called Darbar Sahib), the gurdwara that has been popularly known as the Golden Temple ever since the early 19th century when Punjab’s ruler, the maharaja Ranjit Singh, had the exterior of the upper storeys gilded. Two hundred years earlier Guru Arjan Dev had established the original building on this site, in the centre of a pool of holy water (the amrit sar) which gave its name to the city that grew up around it. According to tradition, the healing properties of this water were originally discovered when a woman’s crippled husband was restored to health after immersion in the water. 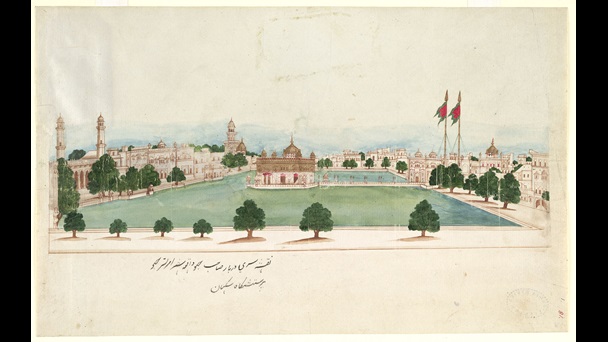 A watercolour painting of the Harimandir or ‘Temple of God’, situated in Amritsar in the Indian Panjab, executed by an anonymous artist in the Panjab style in the 1860’s.

Sikhs emphasise the fact that Harmandir Sahib has entrances on all four sides, reminding them that the gurdwara is open to every sort of person. This symbolises a Sikh commitment to equality regardless of gender, religion or ethnicity. According to tradition, at Guru Arjan Dev’s invitation, a pir (Muslim spiritual master) laid the gurdwara’s foundation stone, so affirming inter-religious friendship.

Sikhs worldwide look forward to visiting Harmandir Sahib and other gurdwaras connected with the Gurus, but pilgrimage is not a requirement of the Sikh religion. Indeed Guru Nanak was critical of tirath (pilgrimage), and the associated ritual bathing in sacred pools: his emphasis was on inward spirituality rather than external ritual. 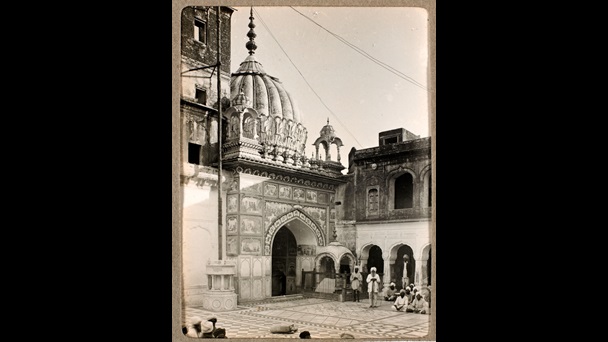 A photograph of the façade and dome of the bāolī or stepwell adjacent to the main Gurdwara established by the third spiritual master of the Sikhs, Gurū Amar Dās, at Goindval in the Indian Panjab.

What are the features of gurdwaras?

The nishan sahib, an orange pennant usually bearing the Khalsa insignia of a double-edged sword, encircled by a quoit and cupped by two kirpans (swords), indicates that a building is a gurdwara. Just inside the entrance there are usually racks for devotees to keep their shoes, wash basins for them to wash their hands after touching their footwear, and head coverings for men who are not wearing a turban. There will be at least one divan hall, i.e. hall for congregational worship.

The focal point of this hall is the Guru Granth Sahib, which is ensconced on cushions on a canopied stand known as a palki (literally, palanquin). When it is not being read, the open volume is covered by rumalas (red and gold cloths). Generally men and women sit down separately on each side of the hall, after having first walked up towards the palki and touched the floor with their forehead in a reverential act known as matha tekna. They may also put some money in the golak (collection box) in front of the palki. If someone is sitting behind the Guru Granth Sahib, reading from it, the reader or another attendant waves a chauri from time to time above the volume as a sign of respect. (Originally the chauri was a fan and – in the centuries before electric fans and air conditioning – dignitaries would be kept cool by an attendant in this way.)

Many gurdwaras have a separate room, known as sachkhand (literally ‘the realm of truth’) in which the Guru Granth Sahib reposes at night on a bed. There is also often a foyer area in which pictures of Sikh shahids (martyrs) are displayed. In the divan hall the walls are generally bare except, in some cases, for portrayals of Guru Nanak and Guru Gobind Singh.

Sikhs may visit the gurdwara briefly to pay their respects to the Guru Granth Sahib and sit for a while in its presence. The sangat (congregation) gathers for kirtan (the singing of the Gurus’ words) and katha (exposition). In the UK the largest attendance is usually on a Sunday, as this is when most people are free, but no particular day of the week is prescribed by Sikh teaching. Festivals too are often celebrated on the following Sunday. Although an akhand path (unbroken reading) continues through the night, the majority of attenders gather for the bhog (the joyful climax) on the final morning. Congregational worship always concludes with an Ardas (petitionary prayer that refers extensively to Sikh history), which everyone reverently stands up for. Then, in cupped hands, everyone receives a portion of karah parshad, a sweet pudding made from equal amounts of coarsely ground wheat flour, clarified butter and sugar plus some water. It symbolises everyone’s equality.

The karah parshad is prepared in the Guru-ka-langar, the Guru’s langar i.e. the kitchen-cum-refectory that is as essential to gurdwaras as the divan hall is. Langar is the word for not only the area of the gurdwara where food is prepared, served and eaten, but also for the time-honoured institution itself of daily providing free vegetarian hospitality for all who come. Langar is not an add-on – it is as central to Sikh practice as the worship in the divan hall. The provision of langar exemplifies the key Sikh principle of seva (voluntary service) which is, in Sikh teaching, coupled inextricably with simaran (mindfulness of God’s name).

Sikhs carry out other types of seva in the gurdwara too: they may dust the footwear in the racks, for example. Seva includes teaching children Punjabi and providing music classes in which Sikhs learn how to play the tabla and harmonium, or other instruments, and to sing shabads. Gurdwaras meet other needs as well: for instance, in Indian gurdwaras they may house a medical clinic.

The term kar seva is used for more strenuous volunteering such as construction work at the gurdwara or (in Amritsar) periodically cleaning out the sacred pool of water.

Disability is increasingly being catered for in gurdwaras but the sometimes rigidly applied requirement for all to sit on the floor in the presence of the Guru Granth Sahib and in the langar hall has posed a challenge to those who cannot sit on the floor or who require a wheel chair. One solution has been lowering part of the floor in the divan hall, so as to accommodate wheelchairs at a level that is deemed respectful to the Guru Granth Sahib. Catering for disability is currently a live issue for the design of gurdwaras. Many langars in the UK provide some benches and tables, although this is contrary to Sikh tradition.

In 1925, while India was still under British rule, the Sikh Gurdwaras Act was passed. The Act brought historic gurdwaras under the control of an elected body, the Shiromani Gurdwara Parbandhak Committee (Chief Gurdwara Management Committee), usually referred to by its initials as the SGPC. Prior to 1925 many concerned Sikhs had been involved in peaceful mass protests against the corrupt gurdwara managers (mahants) who had enjoyed British support.

In the UK, gurdwaras are generally run by an elected management committee. Some sangats, however, venerate a religious leader (known as a sant or a baba) and in these gurdwaras all decisions are referred to the sant concerned.