Spreading the Word: The missionary expansion of Christianity

Professor Brian Stanley looks at the history of how European Christians spread their message, using key texts from around the world, including China, West Africa and New Zealand.

Christianity is not a western religion. It originated on the Western fringe of Asia – what we tend to call the ‘Middle East’. However, for many centuries the expansion of Christianity was directed from Europe and became entangled with the growth of the great European empires. Today over two-thirds of the world’s Christians live outside Europe, which has reverted to what it was in the days of the early Church – unbelieving territory on the margins of the faith. The texts that you can look at here tell part of the story of how European Christians spread their message. They reveal some of their assumptions that we might now find strange or unacceptable. They also point to some of the reasons why Christianity would eventually take deep roots in other cultures – not least through the translation of the Bible into many different languages.

Who were the missionaries?

The Christian Church has sent out missionaries from the days of the Apostle Paul down to the present day. In the 16th and 17th centuries many of them belonged to the Catholic religious orders – societies of men (and later women) who followed a strict rule of life and committed themselves to the task of spreading the faith. The Society of Jesus – or Jesuits – established by St. Ignatius of Loyola in 1534 was especially influential in China.

Illustrated Life of Jesus in Chinese This book contains fifty-six woodblock-printed illustrations of the life of Jesus, each of them with an explanation in Chinese.

Leading Jesuits such as Matteo Ricci (1552–1610) attracted a ready hearing at the imperial court in Peking (now Beijing) through their presentation of Christianity alongside the wonders of European science, which they touted as a single package. They were also willing to express Christian belief in terms that made sense in the Confucian culture of China, for example, by giving approval to the Chinese practice of venerating one’s dead ancestors. Not all Catholics agreed with this, however, and eventually the Pope prohibited Chinese Christians from practising ancestral veneration.

Jesuit missionaries were also active in South America and in the ancient Kongo kingdom in West Africa.

Catechism in the Kikongo language 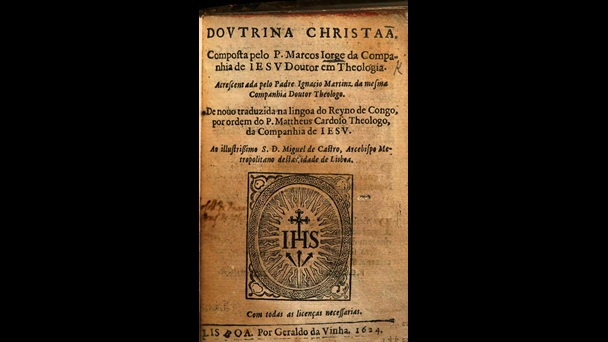 This may have been the very first printed book in the Kikongo language. When in 1625 Cardoso arrived at Mbanza Kongo, the capital of the Kongo kingdom, he brought hundreds of copies of his catechism with him, and presented the king, Garcia I, with twelve copies.

Father Mateus Cardoso was a Portuguese Jesuit who translated a Portuguese catechism (a handbook for teaching Christian doctrine by a series of questions and answers) into the local Kikongo language in 1624. Although Latin remained the language of liturgy used in the Mass throughout the Roman Catholic Church until after the Second Vatican Council of 1962–65, some Catholic missionaries were quick to realise the importance of teaching the faith in the languages of the people to whom they were sent.

Why did missionaries attempt to change people’s cultures?

Our belief in the integrity and value of all human cultures is quite a recent development. From the early 20th century, anthropologists have taught us to try to understand all societies in their own terms. Before then, Europeans believed that all peoples could be placed somewhere along a single spectrum from primitive superstition to modern civilisation and rational ways of thinking. Such ideas profoundly influenced Christian missionaries, who frequently assumed that part of their job was to move people along the spectrum so that they would become civilised, ‘just like us’. A good example is provided by the Puritans – sometimes described as the ‘hotter sort of Protestants’ – who emigrated to North America in the early 17th century. The Puritans made strenuous efforts to bring the gospel to the indigenous inhabitants of the New England colonies. Like other Europeans of the time, their most notable missionary, John Eliot (1604–1690), believed that they needed to be taught the principles of ‘civilisation’, which meant persuading them to exchange their nomadic pattern of life for a settled existence under European supervision. Such attempts to reform the traditional lifestyle of the indigenous peoples proved misguided, as they increased their vulnerability to European diseases, to which they had no resistance.

When did Protestant missions begin?

The Protestant churches that were formed as a result of the 16th-century Reformation lagged behind the Catholics in their involvement in overseas mission, though the efforts of the New England Puritans were a notable exception. John Wesley (1703–1791), the Anglican clergyman who became the founder of Methodism, is another example from a century later. In 1735 he sailed for Georgia in the American South, not simply to minister to the British colonists, but also to preach to the indigenous inhabitants. Whilst on the voyage he encountered a group of pious Christians from Central Europe known as Moravians, who remained impressively calm as the Atlantic seas got ever rougher. The irony is that this experience convinced Wesley that he was not a ‘real’ Christian himself, one who had experienced the transforming grace of God in his own inner life. On his return to England Wesley experienced this spiritual transformation for himself and became one of the leaders of what historians term the Evangelical Revival. This would become the primary source of enthusiasm for overseas mission among Protestants, and to this day most Protestant missionaries are evangelicals. 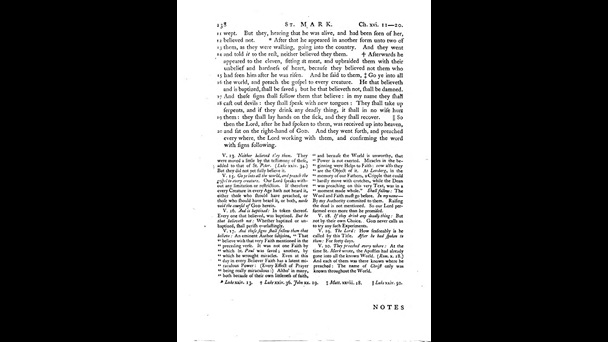 The new ‘evangelical’ variety of Christians who emerged in the 18th century increasingly felt an urgent obligation to spread the Christian gospel to all nations. John Wesley’s note on the parting words of Jesus to his disciples as recorded at the end of Mark’s gospel emphasises that Christ’s command to ‘preach the gospel to every creature’ was ‘without limitation or restriction’. It really did mean to everybody, wherever they lived.

Despite his expressed convictions, John Wesley always had his doubts about the wisdom of sending his Methodist preachers to serve overseas when the spiritual needs of England were so pressing. Only after his death in 1791 did British Protestants begin to catch the missionary vision. The Baptists formed the first evangelical missionary society in 1792, and they were closely followed in 1795 by the London Missionary Society. One of its first fields was Madagascar.

The first New Testament in Malagasy Two Welsh missionaries of the London Missionary Society, David Jones and David Griffiths, were responsible for the translation of the New Testament into the Malagasy language.

The publication of the Malagasy New Testament in 1830 came in the nick of time, for in 1831 the queen, Ranavalona, turned violently against Christianity, having been persuaded that to abandon the ancient customs of her people would incur the anger of the ancestors. Soon, church services became illegal and the missionaries had to flee. In contexts such as this, as in China after the Communist revolution in 1949, missionaries from the West have appeared to be dangerous aliens, undermining local cultural traditions and threatening the stability of the nation. However, in 19th-century Madagascar as in 20th-century China, Christianity survived and eventually grew even without the presence of foreign missionaries.

What impact did the missionaries have?

As always in human history, no single answer to such a question will do. Missionaries believed that they were acting in the interests of non-Western peoples, often defending them against the land-grabbing intentions of white settlers by encouraging them to accept the supposed protection of British colonial governments. Such was the case in New Zealand in 1840, where Henry Williams of the Church Missionary Society persuaded over 500 Maori chiefs to sign the Treaty of Waitangi, which in effect handed their lands over to the British Crown. Williams translated the Treaty into the Māori language, but the words he chose to use appear to have led the chiefs into wrongly supposing that they were simply accepting British protection of their on-going land rights. Williams was a controversial figure who went on to purchase 11,000 acres of land for his own family. Yet generations of the Williams family have a remarkable record of service to the Māori people, among their acheivements being the provision of high-quality schools and helping to standardise the Māori language through Bible translation. Since Te Paipera Tapu ('The Holy Bible in Māori') was first published in 1868, revised translations of the text have been published in 1887 and 1925 (the latter was produced by the Anglican missionary Herbert W Williams, an indirect descendant of Henry Williams). A committee which included Māori scholars such as the notable New Zealand politician Āpirana Turupa Ngata was formed in 1946 to produce a complete revision of Te Paipera Tapu. This version was published in 1952 and remains the accepted translation in use today.

The legacy of Christian missionaries is thus mixed. Christians outside Europe may remember them with affection as their spiritual fathers and mothers. However, in Europe some find their forebears’ unquestioning confidence in their own religious beliefs disturbing. Perhaps the most lasting cultural impact of the missionaries has come through their contributions to Bible translation and education. By translating the Bible into the language of a non-European people, missionaries had to become pupils, learning the finer points of a local language from indigenous teachers. They had to express Christian doctrines using the terms already available in that language – and that meant allowing Western ideas of Christianity to be modified by the cultural assumptions that shaped the language. What’s more, by giving a people education, missionaries not only taught them Christian beliefs, they also gave them tools that they could put to any purpose they wished.

One missionary whose career provides a powerful example of these themes is the Scotsman, James ‘Diego’ Thomson (1788–1854). Thomson was associated mainly with the British and Foreign Bible Society (founded in 1804), and worked in South America (from Argentina all the way up to Mexico) and later in Spain.
Thomson was much more than a Bible translator. He was a pioneer of national public education in three countries – Argentina, Peru and Ecuador. He collaborated closely with some of the architects of national independence as these nations sought to gain their freedom from Spain. He is remembered today in Peru as one of the fathers of the nation. Missionaries are often regarded as collaborators with imperialism, but paradoxically they often turned out to be the midwives of nationalism.