Dr Anna Sapir Abulafia looks at three of the Abrahamic religions: Judaism, Christianity and Islam, and explores the role and narrative surrounding the figure of Abraham in their sacred texts and traditions.

When people refer to the Abrahamic religions they are usually thinking of Judaism, Christianity and Islam. There are, in fact,  more Abrahamic religions, such as the Baha’i Faith, Yezidi, Druze, Samaritan and Rastafari, but this article will focus on the main three aforementioned. The term ‘Abrahamic’ highlights the hugely important role which the figure of Abraham plays in each of these traditions. Jews, Christians and Muslims look to their sacred texts to find the history of Abraham and how it has been interpreted through the ages. For Jews, the central text is the Hebrew Bible consisting of the Torah (the first five books or Pentateuch), the Prophets (Nevi’im) and the Writings (Ketuvim). Abraham’s story unfolds in Genesis, the first book of the Torah. Abraham is referred to over and over again throughout the Hebrew Bible as well as in post-biblical rabbinical materials interpreting the biblical narrative (Midrash). For Christians, the Hebrew Bible is the Old Testament, the precursor of the New Testament that narrates the birth, ministry, death and Resurrection of Jesus Christ as well as the life and preaching of the earliest followers of Jesus. For Christian understandings of Abraham the Letters of St Paul are of particular importance. Muslims engage with the figure of Abraham/Ibrāhīm in their holy book, the Qur’an, as well as in the Hadith, the body of writings which transmit the sayings and actions of the Prophet Muhammad.

What does the Bible say about Abraham?

Let us turn to Genesis to map out the story of Abraham, which is shared by Jews and Christians. In Genesis 12: 1–3 Abraham (at that stage his name is still Abram) is called by God to: ‘Go from your country and your kindred and your father’s house to the land that I will show you. I will make of you a great nation, and I will bless you, and make your name great, so that you will be a blessing … and in you all the families of the earth shall be blessed’ (NRVS). Because Abraham’s wife Sarai (later Sarah) remains childless, Abraham has a son with Sarah’s slave Hagar. The child is called Ishmael. At this stage (Genesis 17) Abraham receives the commandment of circumcision of all males when they are eight days old. At the same time he is told Sarah will bear a son as well. This is Isaac. Trouble brews between Sarah and Hagar as their sons grow up, and Sarah persuades Abraham to send Hagar and Ishmael away (Genesis 21). God promises Hagar that Ishmael too will be made into a great nation. God then tests Abraham’s faith by commanding him to sacrifice Isaac (Genesis 22). But when Abraham is about to sacrifice Isaac on Mount Moriah, an angel stops him and directs his gaze to a ram caught in the thicket. The ram is sacrificed instead of Isaac.

How does Abraham feature in Judaism?

In Jewish tradition the sacrifice of Isaac is called the Akedah, the Binding of Isaac. In times of persecution Jewish martyrs invoked the Akedah as they gave their lives in sanctification of God’s name (Kiddush ha-Shem). The Binding of Isaac as depicted in The Hispano-Moresque Haggadah.

Throughout Genesis, Abraham is depicted as a man who fully trusts God and who follows God’s commandments. This image of Abraham is exemplified in a midrashic story in which Abraham destroys the idols in his father’s house. When he is thrown into a furnace by King Nimrod he is saved by the God he worships. 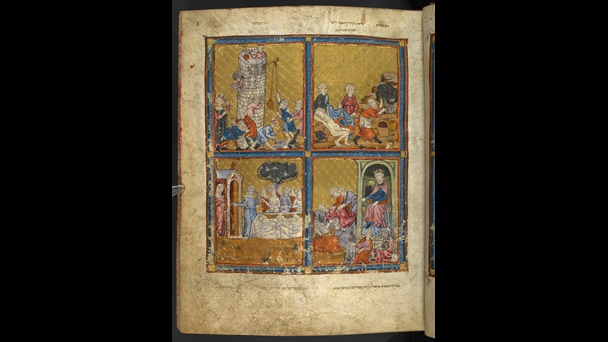 In the lower right hand miniature Abraham is thrown into the furnace by Nimrod.

In Jewish tradition Abraham became identified as the ‘first Jew’. He is depicted as the embodiment of the faithful Jew upholding God’s commandments. Traditionally, Jews see themselves as the descendants of Abraham through his son Isaac and Jacob, his grandson. In Jewish prayer-books God is referred to as the God of Abraham, Isaac and Jacob, and Jews are called the bnei Ya’akov/Israel, ('the children of Jacob/Israel'). The name of Jacob was changed to Israel in Genesis 32. 29. 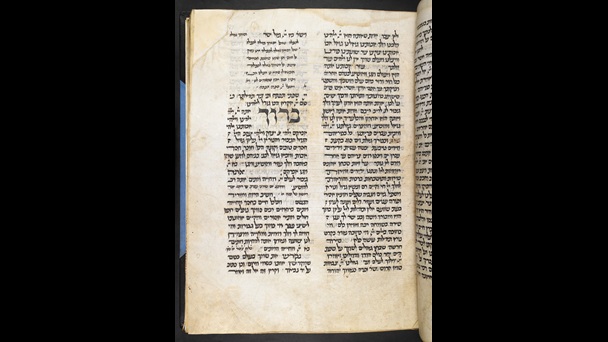 What does the Christian tradition say about Abraham?

In Christian tradition Abraham’s faith became paradigmatic for all those who followed Jesus. In the words of St Paul, in Romans 4: ‘For what does the scripture say? “Abraham believed God, and it was reckoned to him as righteousness.” … The purpose was to make him the ancestor of all who believe without being circumcised and who thus have righteousness reckoned to them, and likewise the ancestor of the circumcised who are not only circumcised but who also follow the example of the faith that our ancestor Abraham had before he was circumcised’. In this way Abraham became the spiritual father of all Christians. The Akedah, the Binding of Isaac on the altar, became the Sacrifice of Isaac in the Christian tradition; it was understood as representing Jesus Christ’s sacrifice on the Cross in atonement for the sins of the whole of humankind. This is the way all families of the earth would be blessed through Abraham. The sacrifice of Isaac signifying that Jesus Christ is the true sacrificial lamb in the Queen Mary Psalter.

What importance does Abraham play in Islam?

Islam shares with Judaism the narrative of Abraham’s destruction of idols in the service of the worship of the one true God. In Surah 37 of the Qur’an, Abraham ‘said to his father and to his people, “What is that which ye worship?” Is it a falsehood – gods other than Allah that ye desire? “Then what is your idea about the Lord of the worlds?” … Then did he turn upon them, striking (them) with the right hand. … He said: “Worship ye that which ye have (yourselves) carved?” “But Allah has created you and your handwork!” They said, “Build him a furnace, and throw him into the blazing fire!”'[1]

Spanish Qur’an from the 13th century 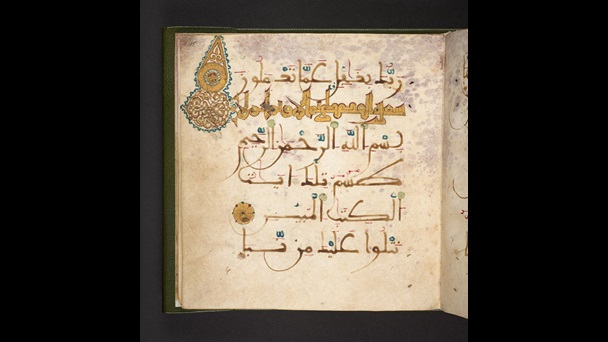 In the same Surah Abraham has a vision that he must sacrifice his son. As in the Bible, Allah intervenes in time. The Qur’an emphasises that this was a difficult trial which both Abraham and his son passed with flying colours. It does not specify whether the son was Isaac or Ishmael, although today most Muslims believe that it was Ishmael/Ismā‘īl. The biblical narrative concerning the dismissal of Hagar and Ishmael is paralleled in the Muslim tradition with Abraham taking Hagar and Ishmael to Mecca, where in due course Abraham and Ishmael build the Ka‘bah, the focus of the Hajj. Illustration of the Ka‘bah in Mecca from a travel guide for pilgrims in Malay, Risalah majmu‘ah fi manasik al-Hajj by Muhammad Azahari bin Abdullah, published in Singapore in 1900.

In Surah 4. 124–25 Abraham is described as the friend of God, and in Surah 3. 67–68 Abraham is presented as a figure who ‘was not a Jew nor yet a Christian; but he was true in Faith, and bowed his will to Allah’s (Which is Islam), and he joined not gods with Allah. Without doubt, among men, the nearest of kin to Abraham, are those who follow him, as are also this Messenger [Muhammed] and those who believe: And Allah is the Protector of those who have faith’. All are encouraged to emulate Abraham, the true adherent of Islam, which means 'submission' to Allah, taught by the Prophet Muhammad.

The shared origins of the Abrahamic faiths

There are many different Jewish, Christian and Muslim traditions concerning Abraham. Interpretations of Abraham reflect the wide variety of beliefs and customs among Jews, Christians and Muslims at different times and in different places. Varieties exist within each tradition as well as between them. Recognition of how different these interpretations are and how often these interpretations exclude the other is important if one is to understand the tumultuous history of relations between Jews, Christians and Muslims. Wishful thinking of a peacefully shared Abrahamic vision belies the realities of centuries of bitter conflict and persecution. Having said that, it is also important to acknowledge the fruitful work that has been done in the field of interfaith dialogue over many years. Theologians such as the German Karl-Josef Kuschel have urged each religion to focus on the essence of Abraham in their respective traditions, a man who trusted in God and who did God’s will. He asks followers of the three religions to recognise each other through their mutual identification as belonging to the Abrahamic family.[2] Another good example is the approach taken by the Oxford Abrahamic Group, which outlines Jewish, Christian and Muslim perspectives on Abraham, Moses, Jesus and Muhammad in order to find commonalities that can lead to fruitful discussions. Just as Abraham is seen by all three traditions to have been a man who put his trust in God, so too must the adherents of the three main Abrahamic religions trust each other enough to be able to engage in respectful dialogue.[3]