The importance of translation in the diffusion of Christianity

The Latin Vulgate Bible was the most commonly used Bible in the Christian West for centuries. Dr Annie Sutherland looks at the history of biblical translations in Anglo-Saxon and later medieval England.

Towards the end of the 4th century, an Italian scholar called Jerome translated the Bible from Greek and Hebrew (the languages in which it was originally written) into Latin. At this time, Latin was one of the languages most commonly spoken in Western Europe, so Jerome’s massive project made the Bible and its teachings available to a wide audience. 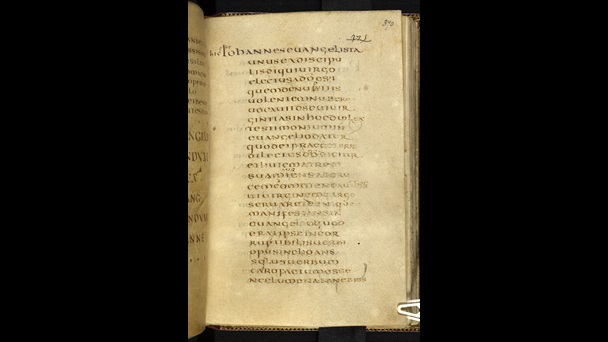 This is the first page of John’s Gospel in a 6th-century Italian manuscript. It contains all of four of the New Testament gospels in Jerome’s translation.

While other Latin translations of parts of the Bible circulated around this time, and while Jerome himself revised and revisited his own translation throughout his lifetime, we call the text that we associate with him the 'Vulgate’. It was this Vulgate Bible that circulated more widely than any other version of the Bible in the Christian West throughout the Middle Ages.[1]

The Qur’an has been translated from Arabic into several languages. However, Muslims regard the original Arabic, by means of which God communicated with the Prophet Muhammad, as the authentic Word of God; translations of the Qur’an are merely supplementary to this original. Jews have tended to take a similar attitude to the Hebrew text of the Bible.[2] However, unlike both of these sacred texts, the Christian Bible is generally believed to carry spiritual authority regardless of the language in which it was originally written (although, as we will see, this was not a belief unanimously held during the Middle Ages). In fact, several medieval copies of the Bible (and of parts of the Bible) contain translations of the text into more than one language. We call such manuscripts ‘multilingual’, and they seem to be designed to allow comparative reading of the Bible across several languages.[3] 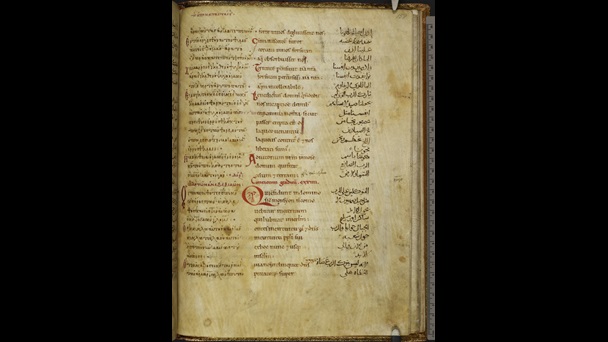 This is a page from a 12th-century multilingual manuscript of the Psalms. In the left-hand column, the Psalms are in Greek, in the middle they are in Latin and in the right-hand column they are in Arabic. If you look carefully, you can see that the scribe responsible for the Latin text has drawn a face inside the red ink capital 'Q'.

The manuscript pictured above is especially interesting. It was produced in Sicily, probably at the royal court of Roger II. The fact that it contains the Psalms in these three languages, each copied by a different scribe, tells us that many Mediterranean societies in medieval Europe were richly cosmopolitan. In fact, the Arabic Psalms in this manuscript may well have been intended for the use of Islamic converts to Christianity.

In Anglo-Saxon England, many different monks and scholars translated parts of the Bible from Latin into English. Some people were anxious about this, as they worried that uneducated people might misinterpret biblical teachings. In the Preface to his translation of Genesis, for example, the 9th-century monk Ælfric wrote:

Now it seems to me, beloved, that the work [of translating the Bible] is very dangerous for me or for any other man to undertake, because I fear lest some foolish man either reads the book or hears it read, that he will think that he might live now under the New Law just as the patriarchs did then, in the time before the Old Law was established, or just as men did under Moses’ law.[4]

Nonetheless, several vernacular translations survive from this period. They were often added to manuscripts containing Latin biblical texts, either in between the lines (interlinear translation) or in the margins of the page (marginal translation). 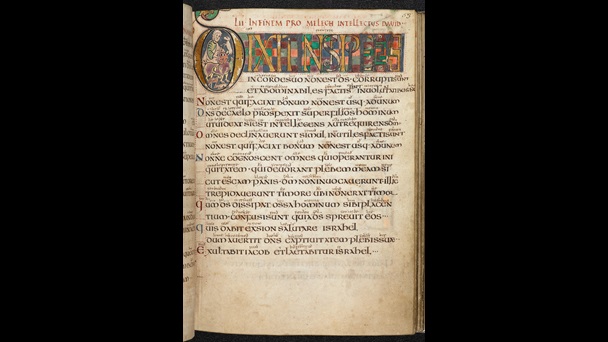 In this 8th-century psalter the Latin text is in large capital letters in the centre of the page and the Old English translation is in much smaller lower case letters between the lines of the Latin.

In a manuscript such as the one pictured above, the Latin Bible remains the focus of the page, with the word-by-word English translation playing a secondary role, fully comprehensible only when read alongside the Latin. We call this sort of translation a ‘gloss’. Other manuscripts, such as the one pictured below, show us that the Anglo-Saxons also read the English Bible independently of the Latin from which it was translated. 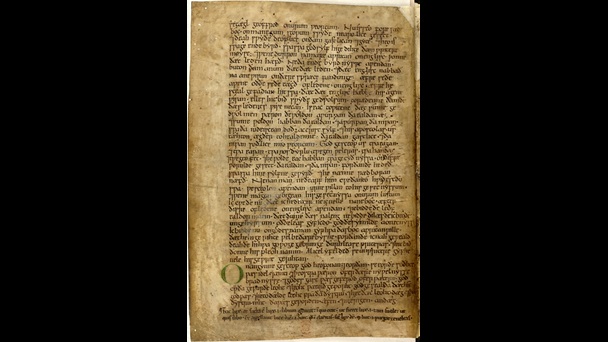 An 11th-century English manuscript containing parts of the Old Testament in Old English. Towards the bottom of the page you can see a large ‘O’ in green ink. This marks the beginning of the Old English Genesis, which reads ‘On angynne gesceop god heofonan and eorðan’ [‘In the beginning, God created the heavens and the earth’]. There are some Latin notes at the very bottom of the page, in smaller handwriting.

Biblical translation from Latin into English continued throughout the later Middle Ages. Of all parts of the Bible, it was the Psalms that were most frequently translated into vernacular languages. This was probably because, as personal prayers which directly address God, they were easily adaptable to use in private devotional practice.[5] Nonetheless, efforts to translate the Bible into the English vernacular during this period were often met with profound suspicion. These suspicions were based in part on a fear that the English language was not as sophisticated a language as Latin and was, therefore, unsuitable for use in the expression of biblical truth. This, for example, was how one anonymous late 14th-century author expressed his anxieties on the subject:

I am very fearful about writing of such high matters, for I have neither the sensibility nor the knowledge to convey them clearly in either English or Latin, and particularly in the English tongue, for it far surpasses my wit to reveal to you, in any vulgar [ie., vernacular] way, any vocabulary associated with divinity.[6]

Many important figures in the contemporary Church also worried that if the Bible was made available to ordinary people in a language that they understood, it might be misinterpreted (as we have seen, Ælfric was anxious about the same thing in the 9th century) and could lead to dangerous heresy. Anxieties such as these led the archbishop of Canterbury, Thomas Arundel, to pass legislation intended to outlaw any unauthorised translation of the Bible, or of parts of the Bible, from Latin into English. Known as Arundel’s Constitutions (1407), this legislation stated:

We enact and ordain that none hereafter translate upon his own authority any manner text of Holy Scripture into the English tongue or any other tongue in manner of a work, book or treatise. And that no such work, book or treatise be read openly or privily, in part or in whole, which was made lately in the time of the said John Wyclif, or since, or hereafter shall be made, under the pain of great excommunication, until such time as that translation be approved by the Diocesan of that place, or if the thing so require by the Council Provincial. [7]

When was the Bible first translated into English?

Arundel’s Constitutions were published in part to counter the threat which the Church believed to be posed by John Wycliffe and his followers. A controversial Oxford priest and academic, Wycliffe (c. 1320–1384) spearheaded the so-called Wycliffite movement which argued, among many other things, for the importance of biblical translation into the vernacular.[8] The Wycliffites were responsible for the first translation of the complete Bible into the English language, completed by the end of the 1390s. Scholars call this translation ‘The Wycliffite Bible’, and have noted that it circulated in two versions: the Early Version was a very literal translation of the Latin, while the Late Version was a looser and more idiomatic rendering of the same. 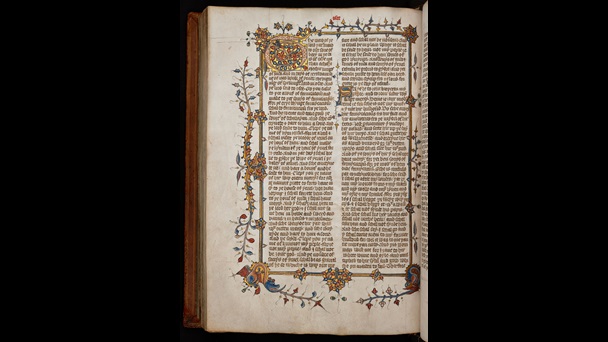 Here is a late 14th-/early 15th-century manuscript of the Early Version of the Wycliffite Bible, open at the beginning of the Old Testament Book of Hosea. This manuscript is important as it is our earliest complete copy of the Bible in English. It is a deluxe production which probably belonged to the Duke of Gloucester, the youngest son of Edward III.

The Wycliffites, and those who shared their views on biblical translation, recognised that God’s truth could be communicated in English just as well as it could in Latin. For such thinkers, Latin was simply a vernacular language on a par with English; it had no special claim to authority:

Since the truth of God resides no more in any one language than in any other, but whoever lives best and teaches best pleases God the most, in whatever language it might be, therefore the law of God written and taught in English may edify the common people just as it edifies scholars in Latin.[9]

This being the case, there was no excuse for denying biblical access to those unable to read Latin:

And since they [the Church authorities] pray so earnestly that Christian people should understand God’s law, I wonder at why they are so unwilling to teach English people God’s law in the English language. For without the English tongue, the unlearned English people will not be able to know God’s law. And I marvel greatly why they are so busy to prevent people from understanding God’s law and the holy Bible.[10]

Despite Arundel’s draconian attempt to limit the audience of the Wycliffite Bible, it became one of the most widely circulated texts of the late Middle Ages, and survives in whole and in part in around 250 manuscripts. Its profound impact on the religious and literary culture of the Middle Ages and beyond cannot be overestimated. 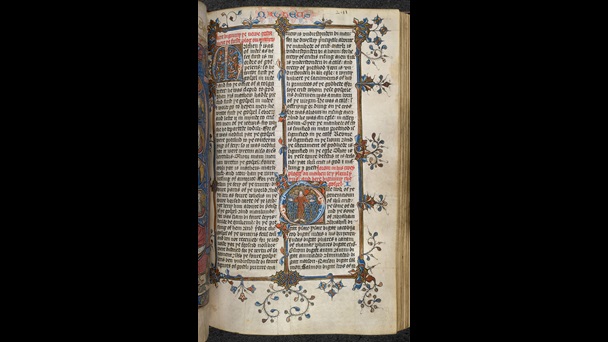 Early 15th-century manuscript of the Late Version of the Wycliffite Bible, beginning of the New Testament. In the bottom right-hand column, you will see that it is a ‘Tetramorph’, which is a figure with four heads (man, ox, eagle and lion). This is a symbolic representation of the four apostles – Matthew, Mark, Luke and John – and it functions as a ‘T’, signalling the beginning of ‘[T]he bok of þe generacioun of ihesu crist’ (ie., the Gospel of Matthew).