The Hebrew language is central to Judaism but several other languages have also been used in biblical translations and interpretations. Daniel Isaacs looks at the languages of Aramaic, Judaeo-Arabic, Djudezmo and Yiddish and their relationships to the Jewish sacred text.

What is a Jewish language?

A Jewish language is a particular form that a language takes when used by Jews, sometimes termed a ‘religiolect’. This term focusses on the social, ethnic and religious identity of the speakers, rather than linguistic differences. Indeed, the speakers of these languages view themselves as apart from their neighbours, and fill their speech with the spirit and images, formulations, concepts and icons from their reservoir of religious traditions. All Jewish languages are primarily written in Hebrew script and contain a layer of Hebrew and Aramaic that easily identifies them as such. They vary in their intelligibility to outsiders; some languages can differ by just a few words, whilst others are incomprehensible to the surrounding population.

The origins of Jewish languages, and there are many, are each a separate story. This article will explore the largest three: Judaeo-Arabic, Djudezmo (Judaeo-Spanish) and Yiddish (Judaeo-German). Each one developed out of the pre-existing language of the surrounding non-Jewish society.

How does Judaism view biblical translation?

The Jewish Bible is written mostly in biblical Hebrew, with a portion from the Books of Daniel and Ezra/Nehemiah written in Aramaic. Due to its sanctity, Jews stress the importance of studying the original text in its original language. The Babylonian Talmud states that ‘whoever translates a verse literally is a liar, but whoever adds to it is a blasphemer’. Nonetheless, even in this early period the rabbis of the Talmud record the following legend regarding the production of the Greek Septuagint (meaning seventy, although the legend mentions seventy-two Elders):

King Ptolemy once gathered 72 Elders. He placed them in 72 chambers, each of them in a separate one, without revealing to them why they were summoned. He entered each one’s room and said: 'Write for me the Pentateuch of Moses, your teacher.' God put it in the heart of each one to translate identically as all the others did.

This legend legitimises the miraculous (and therefore semi-sacred) production of the Greek translation, and highlights the risks of inexpert translation. 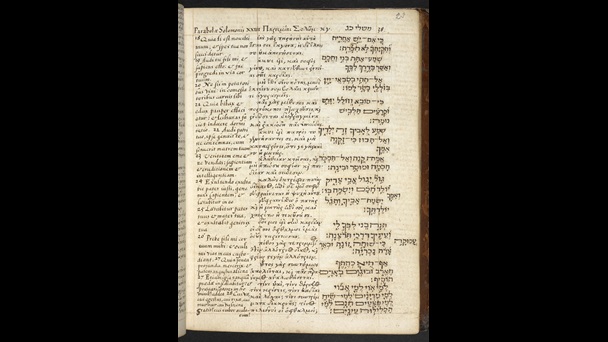 A 17th–18th-century copy of the Psalms with Greek and Latin translations.

Despite the Talmudic reservation, Jews have produced translations of the Bible into as many languages as they speak – Aramaic, Greek, Judaeo-Georgian, Judaeo-Arabic, Judaeo-Persian, Tatar and Yiddish, along with many more. Not all translations are viewed as semi-sacred in the way that the above passage implies. Some are intimately connected to Jewish life and have been passed down from antiquity. These have a semi-canonical status. Others have no special status and were translated for the purposes of education or preserving Jewish identity.

Aramaic is a Semitic language, generally written in Hebrew script, and is believed to be the language that Jesus spoke. The Aramaic versions of the Bible, or Targum, are a collection of translations written in the Jewish dialect of Palestinian Aramaic. They originate in the custom of translating the Hebrew text orally verse-by-verse into Aramaic during public readings of the Hebrew, and thus vary significantly in context. The oldest is by Onqelos (1st–2nd century CE) and is for the most part a syntactical reproduction of the Hebrew original. It gained a unique sacred status across the Jewish world and is found alongside numerous manuscripts and printings of the Hebrew Bible. It is still read by Yemenite Jews together with the original at public readings. Other translations, such as Pseudo-Jonathan or Targum Neofiti include extensive interpretation, homilies, or paraphrases of the original called Haggada or Aggada and cannot easily be called translations.

The Duke of Sussex's German Pentateuch

The opening of Exodus.

Judaeo-Arabic is as old as the earliest Jewish tribes that settled in Arabia. Abu Hurayrah (603–681), a contemporary of Muhammed, reported that ‘the people of the book used to read the Bible in Hebrew and interpret it into Arabic to the followers of Islam’. When the Islamic Empire spread out from Arabia to incorporate the large sedentary populations of the so-called Fertile Crescent, Arabic also spread. Judaeo-Arabic advanced alongside it, reaching as far as Spain, Yemen and Iraq. The newly conquered peoples (Jew and non-Jew alike) acquired an imperfect grasp of the Arabic language. Behind Hebrew and Aramaic, it is the most important language of Jewish literature, including Bible translations. It thrived during the foremost periods of Jewish cultural and intellectual creativity. Speakers of the various dialects of Judaeo-Arabic vary in intelligibility both to other dialects of Judaeo-Arabic as well as to their local Muslim or Christian neighbours.

The earliest Judaeo-Arabic translations date to the pre-Islamic conquest of the Fertile Crescent and North Africa. These translations are remarkable for their literalism, close reproduction of the Hebrew original and idiosyncratic orthography. However, with the coming of Se‘adyah Gaon (882–942) and his translation (al-Tafsīr), not only was Judaeo-Arabic orthography largely standardised, but the literalist approach abandoned for a freer manner of expression written in the style of the target language – Arabic. Se‘adyah believed that the Hebrew Bible, like the Qur’an, is essentially inimitable, yet he still tried to render its style, metaphors and difficult expressions into Arabic, which given the sacred nature of each word was a radical shift in attitude. He attempted to incorporate the sounds of the original Hebrew words and present a rabbinic interpretation of the text. For example, he rejects Christian interpretations of the Son of Man in Daniel 7. 9–15 as referring to Jesus, and presents legal passages according to rabbinic law. Nonetheless, this did not stop Coptic Christians and some Samaritans from adopting Se‘adyah's translation with only minor changes.

However, from about the 15th century Se‘adyah’s language became difficult for Jews to understand, and local translations, called sharḥ (plural shurūḥ), developed. These new versions started out in oral form first, by replacing words and phrases until they entirely eclipsed Se‘adyah’s translation. Eventually, as written versions appeared there was a return to the one-to-one reproductions of the text. Only in Yemen did Se‘adyah’s translation survive, with only the most minimal changes, until the 17th century. 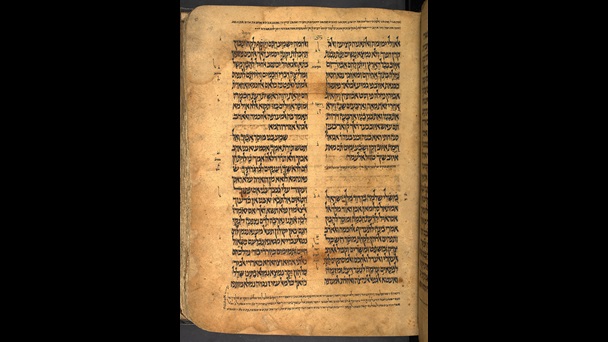 The beginning of Proverbs.

One group, the Karaite Jews, however, rejected Se‘adyah’s version in favour of their own translations. Often attacking Se‘adyah’s interpretations, Karaites (who rejected rabbinic law) viewed Scripture as the sole binding authority for religious tradition. The founder of Karaite Bible study, Yefeth ben ‘Eli al-Basrī, an Iraqi scholar of the 10th century, completed a translation of the entire Bible following the one-to-one reproduction of the ancient versions. His translation and accompanying commentary allowed others, including Yeshu‘ah ben Yehudah (known in Arabic as Abū al-Faraj Furqān ibn Asad) in the 11th, century to develop distinctive translations without slavishly copying Yefeth. 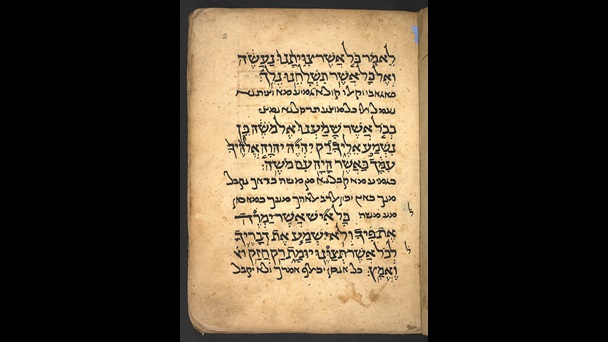 The Book of Joshua.

Djudezmo originated with Spanish speakers in Iberia and spread when the Jews were expelled from there in 1492, migrating to North Africa, the Balkans, Italy and Turkey. It is sometimes identified by other names: Espanyol, Franko, Ladino or Romance. Eventually, it began to be called Djudezmo (and Haketiya in North Africa). The names come from the word for speech in Arabic or from the Spanish Hakito, meaning Isaac (the Patriarch). It contains a large literature, stretching from its earliest beginnings right up to the modern era.

Djudezmo translations were mostly written for women, who rarely learnt Hebrew. The earliest of these translations began in Constantinople around 1540 with the Book of Psalms. These were literal one-to-one reproductions, incorporating many traditional rabbinic explanations of the text, archaic forms of Spanish, original Hebrew names of people or places and – where possible – words that sounded like the original Hebrew. The first complete translation of the Bible was the Ferrara Bible (published 1553), which served Crypto-Jews who had recently returned to Judaism. Unlike other Ladino Bible translations, which were published later in Turkey and Greece, it was written in Latin letters, but imitated their literal style and word choice. These Crypto-Jews, aesthetically influenced by their previous lives as Christians, felt obliged to apologise for its ‘barbarous and strange language, very different from the polite one used [by Christians and Jews] in our times, accusing it of being a language derived from two languages’. 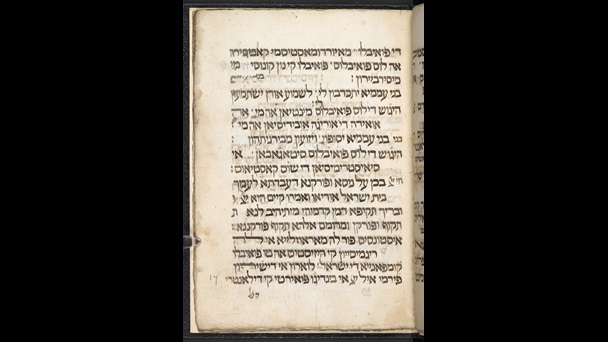 Part of the haftarah for the 7th day of Passover.

Numerically, Yiddish is the most widely spoken Jewish language; originating from south-west Germany, it spread in all directions as Jews fanned out across Europe. There is a wide Yiddish literature, and the language is still actively spoken by Hassidic Jews and Yiddish enthusiasts. It is possible for speakers of Spanish and German to comprehend Djudezmo and Yiddish with varying degrees of success.

The earliest Bible translation into Yiddish follows a one-to-one reproduction, written in a distinct style called Ivre-taytsh. In 1545 Elijah Levita wrote a Yiddish translation of the Psalms, which he aimed at the under-educated. Later, Aaron of Prossnitz proposed a translation of the complete Bible for women and children to read without the help of a teacher. Moses Tendel of Cracow translated the Book of Psalms in 1586 in the tradition of the Ivre-taytsh. Other attempts to translate into Yiddish were undertaken by Joseph Witzenhausen and Yekutiel Blitz at the end of the 17th century. A modern Yiddish translation for women was posthumously published by Solomon Bloogarden (Yehoash) between 1926 and 1936. However, the most successful translation was that of Jacob ben Isaac Rabbino of Yanov (Janova) in the 16th century. Often called Tse’enah u-re’enah, it was thought of as the ‘women’s Torah’ as men were expected to study the original Hebrew. It has been reprinted over 275 times from the end of 16th century to today. Its eclectic and intimate style combines literal and homiletic interpretations of the Bible drawn from rabbinic literature, and includes illustrations and digressions into first person accounts and stories. 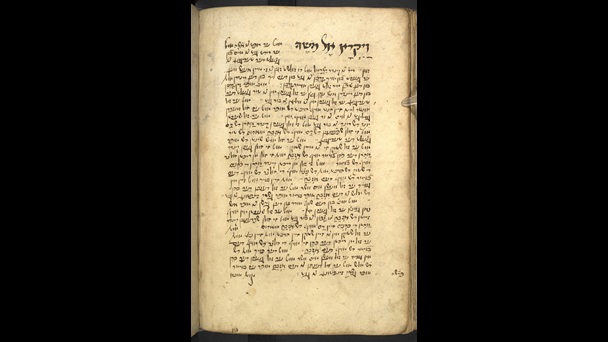 In our brief survey of Jewish Bible translations, we see that whilst they vary enormously in style, canonical status and function, they all share a conscious desire to identify as Jewish and offer a specifically Jewish interpretation and tradition.