Translations of the Bible in Eastern Christianity

Dr Erica Hunter explores the multiple translations of the Bible made in Eastern Christianity, including those in languages such as Syriac, Coptic, Armenian and Ge’ez.

When Reformation scholars decided to translate the Bible into vernacular languages, or the languages spoken by everyday people in Europe, in a way they ‘re-invented the wheel’. The idea of the Bible being written in the languages that people actually understood and could read was not new at all.

What language was the Bible written in?

Although the transmission history of the Old Testament is long and complex, spanning many centuries, it was always written in Hebrew since this was the language that most Jews knew and understood.[1] However, in the 1st centuries CE the Jews living in Alexandria had become mainly Greek-speaking, prompting the translation of the Old Testament from Hebrew into Greek and producing the Septuagint (designated as LXX).

Reflecting their circulation in the gentile world, the Four Gospels that collectively form the New Testament, together with the Epistles of Paul, were written in koine or ‘peoples'’ Greek, which was widely spoken throughout the Middle East. Although Jews living in Palestine spoke Hebrew and dialects of Aramaic, the gentile populations in the great cities of Alexandria and Antioch and throughout Syria and Asia Minor (now modern Turkey) spoke and read Greek. It was natural that the New Testament Gospels would be written in the everyday language that people readily understood. It was for the same reason that Paul wrote his Epistles – or letters – in Greek in the 1st century.

When was the Bible translated?

As Christianity spread in the Roman Empire, translations of the New and Old Testaments were made into the everyday languages that were spoken by the common people. In the late 4th century, Jerome produced the Latin Version, known as the Vulgate (from the Latin versio vulgata, ‘popular version’), that was widely used in the western regions of the Roman Empire; it was eventually affirmed as the official Latin Bible at the Council of Trent (1545–1563).

In the Eastern Roman Empire, from the 2nd century, translations of the Bible were being made in Syriac, alongside the gospel texts in Greek. Syriac, a dialect of Aramaic, was commonly spoken by the gentiles of Syria and Mesopotamia (modern northern Iraq and the KRG administered region of Kurdistan) who were turning from paganism to Christianity.

Did the translations ever change the text?

One of the earliest, and the most curious, Syriac gospel-texts was the Diatessaron (a Greek word meaning ‘through [the] Four [Gospels]’) which ‘harmonised’ the Gospels into a single continuous story. It streamlined the life of Jesus, removing duplications between the different Synoptic Gospels and amending some details. It was composed in the 2nd century by Tatian, who came from northern Mesopotamia, but since only one single fragment of this work has survived scholars are still debating whether the Diatessaron was written in Syriac or Greek. Although this ‘Gospel harmony’ was suppressed in Syria in the 5th century and many copies were destroyed, it was nevertheless very popular and was translated into Latin, medieval German, Flemish, Old Italian and Middle English, as well as Arabic, Coptic and Persian.

The Vetus Syra or ‘Old Syriac Gospels’, the four separate gospels that were in Syriac, were probably written around 200 CE in Syria and used at the same time as the Diatessaron. However, it fell out of use and this version of the New Testament was not known in Europe until the middle of the 19th century when the British Museum (now the British Library) acquired a manuscript from the monastery of Mary Deipara in the Nitrian Desert of Egypt. The Curetonian manuscript (named after its discoverer William Cureton, assistant keeper in the Department of Manuscripts) has the sequence of Matthew, Mark, John and Luke, thus differing from the normal sequence of Matthew, Mark, Luke and John. Dated to the early 5th century, the Curetonian manuscript has only half the original number of leaves, the rest having been irrevocably lost.

The Syriac New Testament was revised several times over the centuries. In the first decades of the 5th century, Bishop Rabbula of Edessa (d. 435) made a new version of the separate gospels in Syriac called the Peshitta (Syriac for ‘simple,’ or ‘common’). It was intended to replace the Diatessaron which Rabbula suppressed since he considered it deficient in biblical authority. The Peshitta was widely used and became the Syriac equivalent of Jerome’s Vulgate. Today, it is still used as the official New Testament by various churches where Syriac is the language of the liturgy. The British Library has one of the oldest copies of the Peshitta, it is dated to 463/4 but there are many later copies in existence. Interestingly, the Peshitta version of the New Testament does not include the seven Catholic Epistles (James; I and II Peter; I, II and III John; Jude). 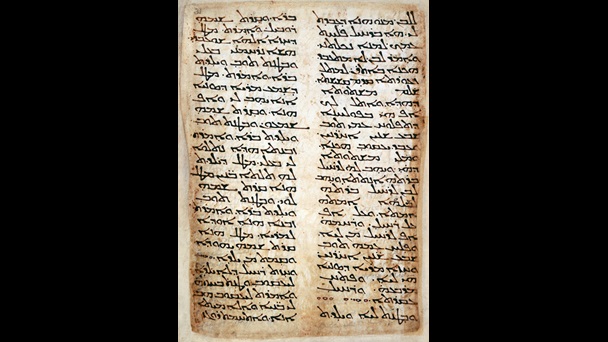 Were the Bible translations in local vernacular languages?

Greek was the official language of the Byzantine Empire and the language of the various ecumenical church councils that were held in the 4th and 5th centuries. Greek had been widely used in Syria and Palestine, as well as in Egypt, but over the centuries began to decline as many of the populace only spoke vernacular or local languages. In Syria and Mesopotamia they largely spoke Aramaic. In Egypt, Coptic (a Semitic language descended from pharaonic hieroglyphics) was widely spoken, especially in the southern regions. Armenian was extensively spoken in the Caucasus, and the language of Ethiopia was Ge’ez. These languages would play significant roles in translations of the Bible.

When the 451 Council of Chalcedon produced the Creed of Chalcedon, after intense debate and definition about its phraseology, matters came to a head. Written in Greek, this Creed was intended to unify disparate interpretations about the two natures of Christ. In reality it did the reverse, and as a direct result three sister churches emerged in Egypt, Syria/northern Mesopotamia and Greater Armenia (covering the region of Eastern Turkey) which refused to acknowledge the authority of the Church of Byzantium. Subscribing to a Miaphysite theology, which maintained the unity of the divine and human natures in the person of Jesus, these churches replaced the Greek Bible with versions written in their own vernacular languages. These linguistic fissures had tremendous ramifications for Bible translations.

In Syria, a new version of the Syriac New Testament was prepared in 508 for Philoxenus of Mabbug (Membidj in modern Syria), who was an influential bishop of the Syrian Orthodox Church. Named after Philoxenus, it was used exclusively by the Miaphysite Church in Syria until its revision in 616 by Thomas of Harkel. Whereas the only extant books of the Philoxenian New Testament are some of the Catholic Epistles and the Book of Revelation, the Harklean Gospel survives in considerable numbers – including a copy in the British Library dated 935–36, which was written in the Convent of St Mary Deipara in the Nitrian Desert, Egypt.

In Egypt, the Miaphysite Coptic Orthodox Church elected to use Coptic in their liturgy and in Bible translations. Of course, there had already been several versions of the Bible that had been translated from the Alexandrian Greek version and were written in the various dialects of Coptic. Texts as early as the 3rd century were written in Bohairic, a dialect of Coptic that was spoken in and around Memphis in the delta region of the Nile. Today it is the preferred language of the Coptic Orthodox Church. At Thebes, where the Sahidic dialect of Coptic was spoken, the first versions of the New Testament had already appeared in the 2nd century because knowledge of Greek was less well-established in southern Egypt than in the northern regions. However, after the 9th century Sahidic Bible translations waned and eventually were lost. It was only in the 18th century that manuscripts written in this dialect were rediscovered. 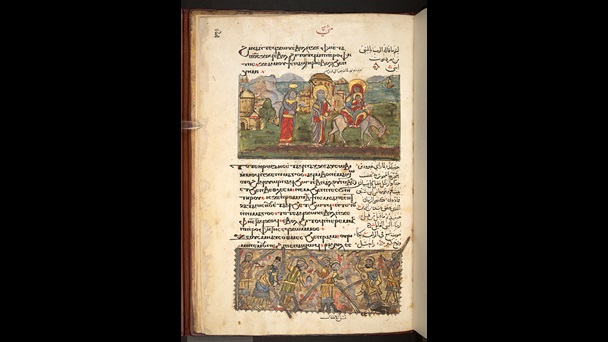 The flight into Egypt.

The translation of the Bible into the Armenian language was deliberately orchestrated in the early 5th century as an expression of regional identity. Prior to that point the scriptures had been written either in Greek or Syriac since Armenian was only an oral language. Mesrob, who was responsible for the translation with support from the ruling royal house of Armenia that had converted to Christianity in 330, created a script of thirty-six characters in order to write down the Armenian language. He began by translating the Old Testament of the Syriac Peshitta and also used Greek texts from Alexandria, completing his project around 434. Mesrob must have been a very talented linguist, for he was also responsible for the creation of the Georgian and Albanian alphabets that appeared in the 5th century and led to translations of the Bible into those languages. 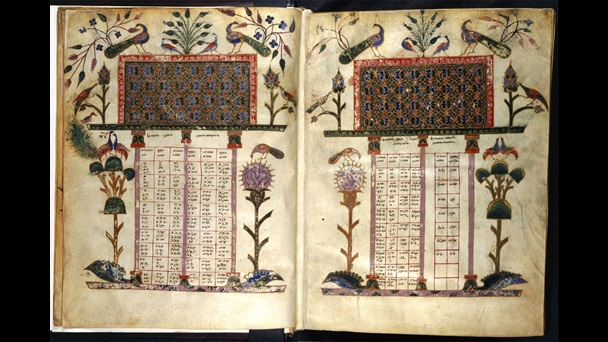 In Ethiopia, the translation of the Bible into Ge’ez also began in the latter part of the 4th century, following the conversion of Ezana to Christianity at the hands of Frumentius, a slave who impressed the king. The process of translation from Greek into Ge’ez continued in the 5th and 6th centuries with the arrival of the ‘Nine Saints’ who are traditionally linked with Syria. The Ethiopic Bible is distinguished by its unique inclusion of I Enoch, a book that is found in no other Bible tradition, after the 5th century, suggesting that I Enoch was translated from Greek into Ge’ez before this time. In the 19th century, the Bible was translated into Amharic, since most modern Ethiopians no longer understand Ge’ez, the liturgical language of the Ethiopian Tewahido Orthodox Church. 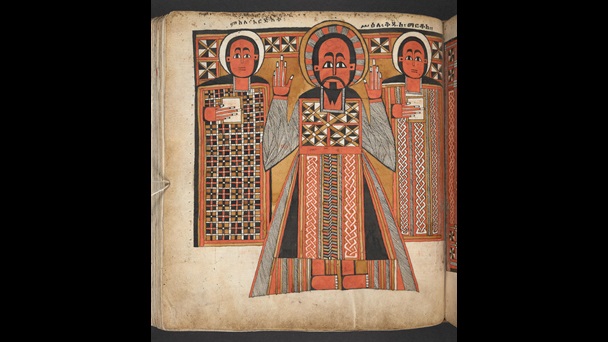 Gospel of Mark with the Evangelist’s portrait.

Translations of the Bible are still on-going today and are very valuable in transmitting oral languages into written form. In the 19th century, the spoken language of the Arunta aboriginal tribe in central Australia was written down for the first time when Lutheran missionaries, the most notable being Karl Strelow, painstakingly translated the Bible. Efforts such as these helped to preserve aboriginal languages and provide the basis for modern linguistic studies. Similarly, the ancient fragments of Bible texts translated into different languages give us a window into long-gone worlds that would otherwise have been lost.

https://sounds.bl.uk/resources/discovering-sacred-texts/C1658_2_s1_Syriac_liturgical_music_RC_edit.mp3
Update Required To play the media you will need to either update your browser to a recent version or update your Flash plugin.

Live recording of liturgical chant sung by Syriac Christian monks at the Mor Gabriel Monastery in Tur Abdin, southeast Turkey. There are very few recordings of the liturgy of the Syriac Orthodox Church made in situ, even though it is one of the oldest forms of music in the world, and the finest exhibition of the Syriac language. Explore this recording further.