Women have played an important role in the history of Christianity. Indeed, the first visual images of Jesus’s Resurrection to appear were in fact of women finding the tomb empty (Mark 16. 1–8; cf. Matthew 28. 1–10; Luke 24. 1–12) rather than of the risen Jesus.[1] The women, who came to anoint Jesus’s dead body with spices, instead encounter a ‘young man’ (Mark) or ‘angel’ (Matthew/Luke) who informs them that Jesus has risen.

What role did women play in discovering Jesus’s Resurrection?

There is notable ambiguity amongst early commentators concerning the presentation of the women at the empty tomb. Key features in the Markan account that are often noted include: (i) the significance of the women’s intention to anoint Jesus’s dead body; (ii) their interaction with the ‘young man’ at the tomb; and (iii) the women’s fearful response to the news of Resurrection. Often, the women are appealed to as examples to be followed, as illustrated by the following homily of St Gregory the Great (c. 540–604):

We too, who believe in him who died, approach his sepulchre with spices if we are strengthened with the sweet smell of the virtues, and if we seek the Lord with a reputation for good works.[2]

However, the women’s actions were not uniformly interpreted positively, as indicated by the critical comments of Peter Chrysologus (c. 400–450), the 5th-century bishop of Ravenna:

In this text [Mk 16. 1f.] the women hasten with feminine devotion; they bring to the tomb not faith in One who is alive, but ointments for one who is dead; and they prepare for the duties of mourning for one who is buried instead of preparing for the joys of divine triumphs for One who is risen.[3]

The significance of these women, as the first witnesses of the Resurrection, has continued to be recognised across the centuries. For example, the ‘holy women at the tomb’ feature in the Shaftesbury Psalter, a 12th-century prayer-book thought to have been produced for a female patron. 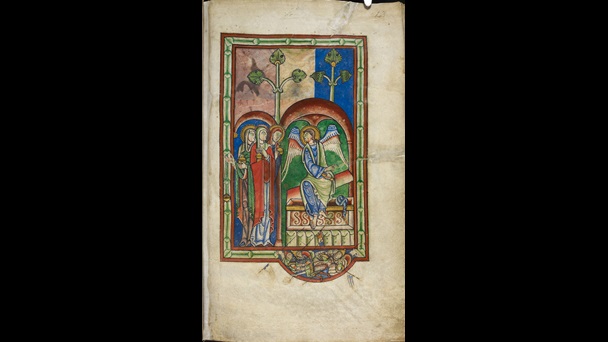 A representation of the ‘holy women at the tomb’, from the Shaftesbury Psalter.

Similarly, Hildegard of Bingen (1098–1179), a 12th-century Benedictine mystic who experienced a vision revealing to her the meaning of Scripture, included amongst her homilies on the Gospels one interpreting the Markan narrative of the women at the empty tomb (Homily 28).

St Mary Magdalene is often singled out as a particularly significant witness to Jesus’s Resurrection (based on the account found in John 20. 1–2, 11–18), as illustrated in the Holkham Bible Picture Book. 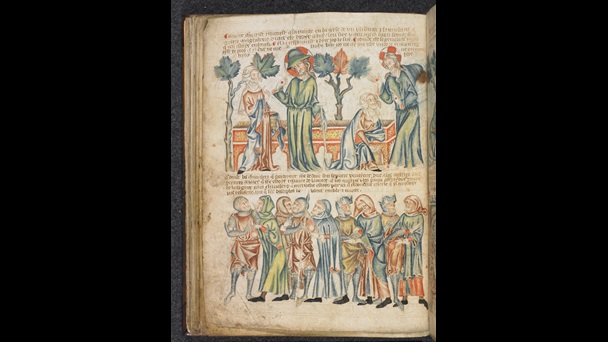 The ‘holy women’ discover an angel at Christ’s empty tomb.

The Johannine account describes St Mary Magdalene’s encounter with Jesus after the Resurrection, when at first she does not recognise him and thinks he is a gardener. After she subsequently recognises him, he tells her not to touch him (noli me tangere in the Latin translation of the text). The Holkham Bible Picture Book harmonises several different Gospel Resurrection accounts, including both a group of women going to the tomb (Mark 16. 1–8) and a portrayal of St Mary Magdalene encountering Jesus (John 20. 1–2, 11–18).

How is the Virgin Mary, Jesus’s mother, presented in the Gospels?

A particularly iconic female figure in Christianity is Jesus’s mother, the Virgin Mary. A key moment from the Virgin’s life frequently represented and discussed is the Annunciation (Luke 1. 26–38), where the Angel Gabriel announces to Mary that she has been chosen to give birth to the child Jesus.

Whilst often associated with her role as mother, sometimes the Virgin’s significance is portrayed in other ways, not based on the New Testament, as illustrated in the 14th-century Yates Thompson manuscript. 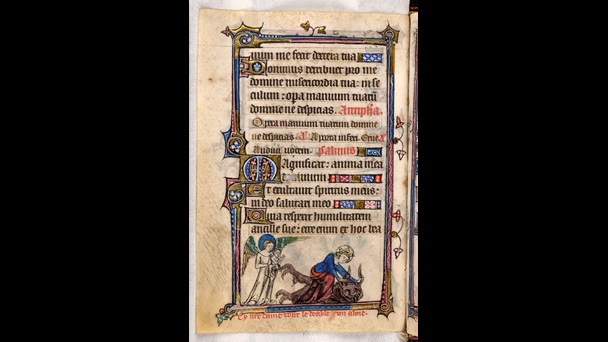 A representation of the Virgin Mary, pulling on the horns of a vanquished devil, from the Taymouth Hours. Minor female figures in the Gospels

Other women appear in the Gospel narratives, such as Jairus’s daughter and the woman with haemorrhages (Mark 5. 21–43), whom Jesus healed during his ministry. They have attracted less attention but have nevertheless featured in some illustrated manuscripts. The history of these women are included in the many and varied translations of the New Testament that were produced in the medieval period, such as Tyndale’s New Testament. 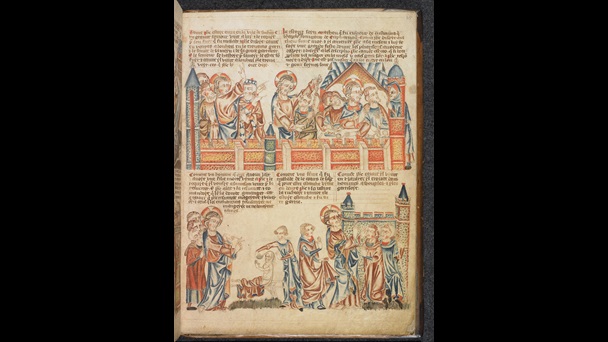 Illustrations of Christ raising Jairus’s daughter and healing the woman with haemorrhages.

Some of the women mentioned in the Gospels have functioned as distinctly negative examples. The daughter of Herodias (Mark 6. 17–29), often referred to as Salome (though she is unnamed in the New Testament), has had a particularly influential impact. Renowned for dancing before Herod and asking for the head of John the Baptist on a platter by way of reward, the dance itself is not described in the New Testament, but the girl has been widely interpreted as a femme fatale by artists and commentators reflecting on the narrative. Salome dances before Herod, and the death of John the Baptist, from the Holkham Bible Picture Book.

What do the apostolic letters say about the role of women?

Alongside the aforementioned women who appear in the New Testament Gospels, significant attention has focussed on the Apostle Paul’s comments about the roles and duty of women when assessing their place in Christianity. Much ink has been spilled assessing whether St Paul was countercultural in his attitude towards women or whether he conformed to the patriarchal structures of his day, endorsing the subordination of women to men. In fact, both views have been substantiated with reference to his letters. For example, St Paul’s countercultural approach has been supported with appeal to passages such as Gal 3. 28:

This has been described as radically egalitarian in its portrayal of the Christian community where gender differences no longer exist. Others, however, have questioned whether the androgynous implications of this passage are really to be celebrated as egalitarian at all.

Another Pauline passage frequently cited to support St Paul’s countercultural position is Romans 16, where a host of women are commended to the Church at Rome (including Phoebe, Prisca, Mary, Junia and Julia). Particularly significant amongst these is Phoebe, who is described as a ‘deacon’ of the Church at Cenchreae (Romans 16. 1). This detail has been cited by those suggesting that Paul endorsed women holding leadership positions, though there has been much debate about precisely what the term ‘deacon’ actually signified.

In contrast, passages such as I Corinthians 14. 34–35 appear to contradict this affirmatory position, with its clear directive that ‘women should be silent in the churches. For they are not permitted to speak … For it is shameful for a woman to speak in church’. Does this indicate irreconcilable differences in the way that women are understood in different parts of St Paul’s letters? It may be argued that there are tensions even within a single letter, for I Corinthians 11. 5 accepts that women may pray and prophesy but they are mandated to do so with heads covered. Some scholars have therefore argued that St Paul’s letters should be regarded as ad hoc writings, addressing specific circumstances and problems in particular churches. This would explain the variety of positions which can be identified in St Paul’s letters, some of which are in direct tension with each other.

Another key text that often features in debates about attitudes towards women in Christianity is Ephesians 5. 21–33, with particular emphasis placed on Ephesians 5. 22 (‘Wives be subject to your husbands as you are to the Lord. For the husband is the head of the wife just as Christ is the head of the Church’). Since this letter is widely classified as Deutero-Pauline (that is, not written by the Apostle Paul), some therefore do not adhere to its authority, suggesting that St Paul nowhere commands wives to be subject to husbands. Nevertheless, since I Corinthians 11. 3 also asserts that ‘Christ is the head of every man, and the husband is the head of his wife and God is the head of Christ’, the implications of subordination cannot be entirely avoided (though some would argue ‘head’ here should be interpreted as ‘source’ rather than ‘authority’). However, the context of these passages is often ignored in the process of using them to proof-text various positions about women in the Church. For example, Ephesians 5. 21 (‘Be subject to one another out of reverence for Christ’) is frequently ignored.

What about women in Christianity today?

When assessing female leadership in contemporary Christianity, it is important to distinguish between different denominational positions (for example, the Church of England adopts a different stance to the Roman Catholic Church, and even within the Anglican Communion different positions are held). The first ordination of women to the priesthood in the Church of England was on 12 March 1994, following legislation passed by the General Synod in November 1992, ratified by Parliament in 1993. This was eventually followed by another vote in 2014 to allow the consecration of women bishops. Both these developments met with significant opposition before they were successful. Arguments both in favour and against women’s leadership in the Church were often supported with reference to particular biblical texts. The rising prominence of social movements for gender equality certainly added momentum to the arguments in favour of allowing female priests and bishops. 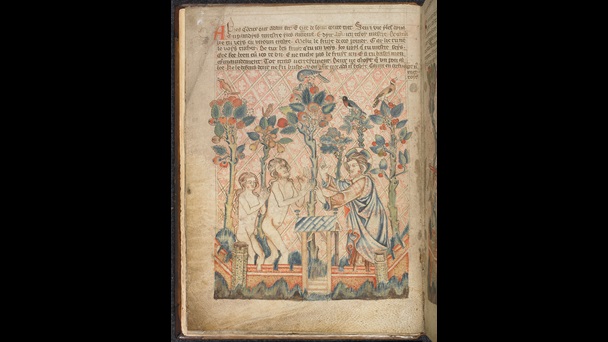 Depictions of Adam and Eve.

In contrast to the Church of England, the Roman Catholic Church still restricts the priesthood to men alone. Pope John Paul II’s 1988 apostolic letter Mulieris dignitate (‘On the Dignity and Vocation of Women’) acknowledged the growing need to address the role of women in the Roman Catholic Church, and concluded that women are equal to men but different. He affirmed the important place of women with extensive reference to key roles played by female figures in the Old and New Testaments. He merged Adam and Eve myths with the bride/bridegroom image from Ephesians 5. 22–33, emphasising mutual submission. The Pope maintained that Genesis 1. 27 is ‘the basis of all Christian anthropology’. He then goes on to explore the parallels between Eve, being ‘the mother of all the living’ (Genesis 3. 20), and ‘witness to the biblical “beginning”’, and Jesus’s mother the Virgin Mary, as ‘the witness to the new “beginning” and the “new creation” (cf. II Corinthians 5. 17), since she herself, as the first of the redeemed in salvation history, is “a new creation”’. 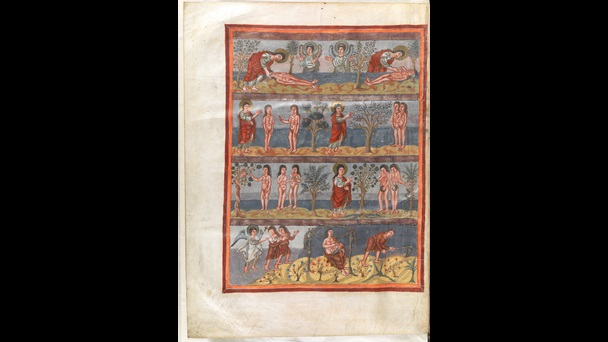 An illustration of Adam and Eve expelled from Eden, Eve nursing her child and Adam tilling the soil.

Nevertheless, despite such positive affirmations, he concluded that:

In calling only men as his Apostles, Christ acted in a completely free and sovereign manner. In doing so, he exercised the same freedom with which, in all his behaviour, he emphasized the dignity and the vocation of women, without conforming to the prevailing customs and to the traditions sanctioned by the legislation of the time.

The Pope went on to affirm the position of the declaration Inter Insigniores with regard to the admission of women to the priesthood, asserting that in the sacramental ministry of the Eucharist ‘the priest acts “in persona Christi” and it must therefore be performed by a man’ (Mulieris dignitate, p. 26). Notwithstanding this position, there remain a significant group who continue to campaign for women priests in the Catholic Church.

This brief survey has focussed heavily on significant New Testament female figures because the debate about women’s place in Christianity is often based on the interpretation of authoritative Christian sacred texts. However, as my analysis has demonstrated, these are often open to different interpretations and therefore cannot be conclusively appealed to for conclusive evidence to defend or undermine an attitude of radical equality towards women.