Women and gender in the Hebrew Bible

Rabbi Debbie Young-Somers takes a look at women within the Hebrew Bible, traditional and modern Jewish interpretation of the scripture and womens’ relationship with biblical education.

Women and gender in the Hebrew Bible

During the first half of 2012, we were trying to pick a name for our as yet unborn daughter. At first our favourite name was Yael; she is, biblically, inextricably linked to the prophetess Deborah (my own name). But on reflection, the thought of naming a baby after a woman who slays a man – after seducing him – by driving a tent peg through his head wasn’t actually that appealing. It quickly became obvious that there were very few biblical women that offered us ideal names to honour: jealousy, competitive baby-making, rape, gossip, manipulation… but then again, the men tend to be just as flawed. This is one of the parts of the Hebrew Bible that is perhaps most relatable – none of the role models we read about are presented as perfect paragons of humanity. Even Moses, arguably our greatest leader in scripture, makes mistakes, and thus we are reminded that we too, in all our imperfection, might be able to make a contribution in the world.

How are women presented in the Hebrew Bible?

So the women (and men) we are presented with in the Hebrew Bible and beyond, into rabbinic literature, are complicated human beings, imperfections and all.[1] Some may be archetypes, and many biblical women are only known by their relationships to men. For example, in Exodus 6. 23 we learn that ‘Aaron married Elisheva, daughter of Amminadab and sister of Nahshon, and she bore him Nadab and Abihu, Eleazar and Ithamar’ – she is a wife, daughter, sister and mother; we know nothing more about her. Even women with important roles to play in the narrative of the Torah remain unnamed – such as Pharaoh’s daughter, who rescues Moses from the reeds in the Nile and names him (Exodus 2. 10). This is much less frequently the case with male figures (although lists of names that are both male and female are a frequent, rather dull feature of biblical storytelling). 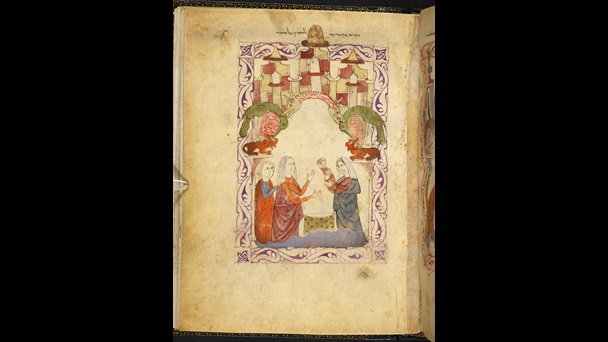 The Hispano-Moresque Haggadah is the service book used in Jewish households on Passover Eve to celebrate the Israelites' deliverance from Egyptian enslavement as described in the Book of Exodus. Depicted here is the discovery of baby Moses.

Of course there are incredibly important female figures in the Hebrew Bible, from Eve to the matriarchs in Genesis (Sarah, Rebekah, Leah and Rachel, who are now included in Progressive Jewish liturgy when the Patriarchs are mentioned) and Miriam, Moses's sister. Beyond the Torah there are impressive women, such as the prophetess Deborah in Judges and Queen Esther in the Book of Writings, but ultimately, ‘The power of ancient biblical narratives is often marred … by the peculiar voicelessness of the women, Matriarchs powerful enough to deflect the course of covenantal succession, yet almost never the enactors of narrative’.[2] That is not to say that the women of the Hebrew Bible do not take up crucial parts; indeed they are often seen at work behind the scenes moving the narrative along and fulfilling God’s will.

Does God have a gender?

Mary Daly famously wrote in Beyond God the Father that ‘If God is male, then the male is God’. In the West, our language and images of the divine have overwhelmingly fallen into the male sphere over the centuries, and this has not been helped by the Hebrew language. In Hebrew every significant word has a gender, for example, a book isn’t usually gendered in English, but Hebrew makes 'book' a masculine word. Most Jews would tell you that God is neither male nor female, yet the names used to describe God in the Hebrew Bible are masculine names. The exception being within the rabbinic tradition that developed after the destruction of the Temple in 70 CE, where a female name for God was introduced (Shekhinah, representing the immanent presence of God that dwells among the people). In the 20th and 21st centuries women have embraced these small opportunities to find the feminine in the Hebrew Bible and the traditions that grew out of it, from commentaries interpreting the biblical narrative, to midrashic storytelling, to illustrations in manuscripts.

How has Judaism interpreted the Scripture?

Ultimately, how the Jewish community understands the stories of the Hebrew Bible is not just a simple reading of the book. The scriptures are read through hundreds of years of interpretation and storytelling, allowing us multiple interpretations and lenses from which to learn and explore. One excellent example of this is Queen Esther. 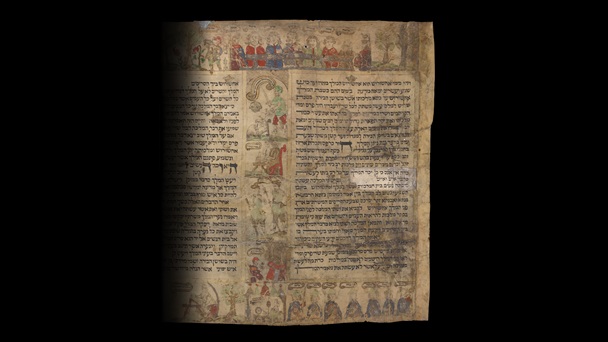 Megilat Esther (the Book of Esther) is a short book within the Hebrew Bible. It tells the story of a Jewish maiden called Esther saves the Jews of Persia from an annihilation plot, and is crowned Queen of Persia.

On reading the Book of Esther we are presented with a society where women who say no to men’s whims are exiled, beauty is prized above all else in a wife, and is then used by said wife to manipulate (and win over) her husband. I was once asked to present a Jewish perspective on beauty, and was given the text of the beauty pageant from the Book of Esther. However, this is not the Jewish approach to beauty, partly because it is just one of many stories and is not set in a Jewish context, but also because we read Scripture through the lens of interpretation.

In the Talmud (Megilla 13a), the rabbis are having a discussion about why Esther was called Esther. The conversation helps us understand that the name ‘Esther’ itself suggests something was being hidden, and ties her into the surrounding culture, with Esther being connected to Ishtar. We also learn that Esther was her Persian name – and her Hebrew name was Haddassah (Hebrew for Myrtle):

Rabbi Neḥemya concurs and says: Hadassah was her real name. Why then was she called Esther? This was her non-Hebrew name, for owing to her beauty the nations of the world called her after Istahar, Venus. Ben Azzai says: Esther was neither tall nor short, but of average size like a myrtle tree, and therefore she was called Hadassah, the Hebrew name resembling that myrtle tree. Rabbi Yehoshua ben Korḥa said: Esther was called Hadassah because she was greenish, having a pale complexion like a myrtle, but a cord of Divine grace was strung around her, endowing her with a beautiful appearance.

Part of a Babylonian Talmud 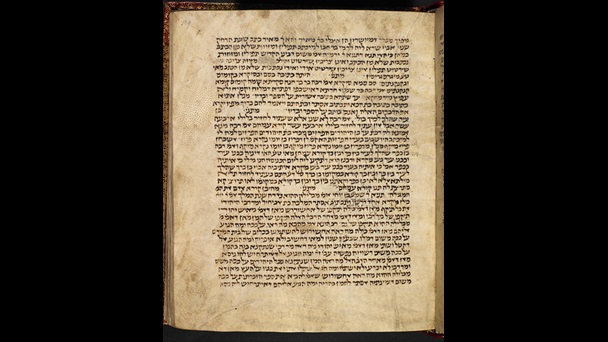 Fragments of the Babylonian Talmud, featuring the rabbinical discussion about Esther.

In other words, Esther wasn’t quite the beauty queen one might imagine: she was pretty sallow looking, and of average height, but she won the pageant because her inner beauty shone through. From the biblical narrative, which focusses on the superficial (and becomes almost farcical), the rabbis find many different ways of adding, deepening and extracting meaning from the Book of Esther. This helps us as modern readers to continue that tradition and follow the rabbinic model of turning to the text again and again to find how it will speak to us in each generation. For example, during the festival of Purim in 2018, when the #metoo movement was gaining followers, groups of women supported charities such as Jewish Women’s Aid by purchasing ‘Vashti #metoo’ t-shirts. Vashti is a character in the Book of Esther, which is read during the Purim festival; she was the first wife of the king in the story, and was exiled after refusing to display her beauty and the royal crown in front of the king’s friends at a big feast. Revisiting the narrative with a new lens offers the chance for us to learn about what sexual violence occurs, or does not occur, in the Book of Esther, and what that means for our tackling such abuse today. Jews famously do not necessarily agree with one another in their interpretations, and this example is no exception! The gaps left by the text, and the ability of humanity to continually find new meanings and extract new interpretations is key to the Jewish textual tradition and how it develops beyond the Hebrew Bible. Thus a simple reading of any of the characters, male or female, in the Hebrew Bible is always accompanied by interpretation. This is a process that we are continually invited to be a part of, and one that in every generation we can use to bring new life and deeper meaning to the biblical text, helping it speak to us with something fresh for today.

Women and the Talmud

Women have historically had some access to this learning, but not always without controversy. In the Talmud (Sotah 21b), there is a discussion about the test of the Sotah (Numbers 5) from Torah, which is where a woman suspected of adultery is given a strange drink that will kill her if guilty, but not if she is innocent. Rabbi Eliezer, discussing this case, is frequently cited as a source to suggest that women shouldn’t learn: ‘Rabbi Eliezer says: Anyone who teaches his daughter Torah is teaching her promiscuity’. The insinuation is that teaching a woman Torah will help her cheat the test, and thus allow her to be promiscuous. However, people often fail to cite the entire passage – a great example of selective reading of texts. When one reads the whole it is clearly not as simple as Rabbi Eliezer’s approach:

Ben Azzai states: A person is obligated to teach his daughter Torah, so that if she drinks and does not die immediately, she will know that some merit of hers has delayed her punishment. Rabbi Eliezer says: Anyone who teaches his daughter Torah is teaching her promiscuity.

There is of course broader context and discussion, but many commentators have agreed with the 12th-century scholar Moses Maimonides, who taught that women who were ignorant would trivialise the Torah’s wisdom. 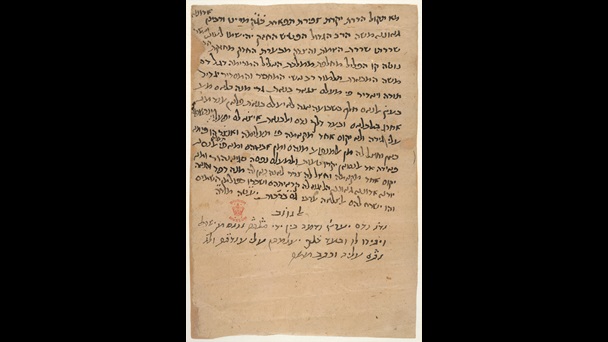 Moses Maimonides’ autograph responsum (reply) to a question referred to him by a rabbinical court. The case referred to Maimonides concerns a teacher who had sworn not to teach the daughters of a certain man, but who had ultimately regretted his act.

In fact, it seems that throughout Jewish history women were more likely to read about the biblical characters and stories than to study the Talmud. Women were homemakers, like many of their biblical matriarchs, but they were also business women, educators, and makers of ritual in the home.

However we have only really begun to see the emergence of female equality and parity in the last 100 years, and there is still work to be done. Women have themselves begun to add their voices to the thousands of years of commentary on the Hebrew Bible, unpacking and expanding our understanding of not just the women, but the rich narratives, challenges and learning embedded in the Five Books of Moses, Prophets and Writings. When half of the population are excluded from having their voices heard, we miss out on half of the wisdom of humanity. However, we are at an exciting time in history today, where the continual process Jews have always engaged in to understand the Hebrew Bible can be enjoyed by both men and women, and our collective learning and growth is enhanced. We understand more about what the women in the Bible can represent and teach us, and we learn more about how to engage with the texts broadly as modern readers. Judaism is in a constantly evolving process when it comes to reading the Hebrew Bible, and it is a huge blessing when all can participate.

[1] It is worth noting that the Hebrew Bible is pretty binary about gender; however, rabbinic texts do explore multiple places along a gender spectrum.