Women have played a central role in the development of Islamic history and theology. This role is often overlooked, both by Muslim patriarchal societies and the Western media. However, women have featured in Islam’s primary and secondary sources, weaving a rich tapestry of life and roles.

What does the Qur’an say about women?

Women are expected to perform all the religious duties of prayer, fasting, pilgrimage, paying alms, encouraging the good and forbidding the wrong. However, there is a marked differentiation that the Qur’an makes when it comes to social roles. It assigns financial responsibility to men as maintainers of the family unit. This does not preclude women from becoming the breadwinners or contributing but there is no theological expectation of this under Islamic law: that is only assigned to the male family members. The Qur’an was reflecting its society when stating these laws. Even today globally most of the world's societies are patriarchal and men remain in positions of authority and financial control. The Qur’an took reality and converted it into a male duty.

Islam privileges the family unit as society’s foundational building block. Hence it lays down detailed laws on marriage and divorce. Women must be paid a dowry at the time of contracting marriage. 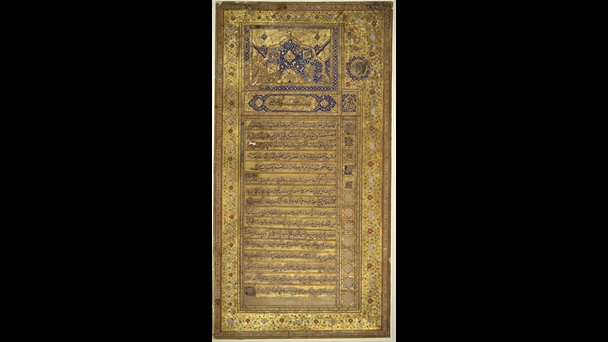 This lavish certificate records the marriage of the last Mughal ruler, Bahadur Shah II (r. 1837–1857) to Zinat Mahal Begam in India on 18 November 1840.

Equally, divorce cannot be arbitrary: there must be three monthly periods with three divorces, to allow for a cooling period, reflection and reconciliation. Divorced women must be paid maintenance for children. As for inheritance rights, these are also given to women. What is revolutionary and worth noting is that Islam gave women the right to own property in their own name, and this did not pass onto their husbands on marriage.

Are there women in the Qur’an?

Several women are referred to in the Qur’an and hailed as role models for both women and men. Eve is referred to as Adam’s mate, in whom he finds comfort. At no point is she blamed for tempting Adam. In fact, Islam does not accept that Adam and Eve fell from God’s grace, but instead suggests that they came to earth as part of the grand divine plan. The mother of Moses receives divine inspiration to put the babe Moses in a basket in the river, and is then led by God to become his wet nurse once he has been adopted by the Pharaoh and his wife. The wife of Pharaoh, the greatest tyrant of his time, is indeed one of the most revered women in the Qur’an: she believes in God, is tortured as a result and killed by Pharaoh, but her faith remains unmoved. The Queen of Sheba encounters Solomon and commands great respect from her ministers and subjects. She, however, submits to God when shown His glory through Solomon. The mother of Mary is presented as a very pious woman devoted to God. However, the only woman named in the Qur’an, after whom a chapter is also named, is Mary, mother of Jesus: she is devout, pious, infallible and pure.

Indian Qur'an from the 16th century 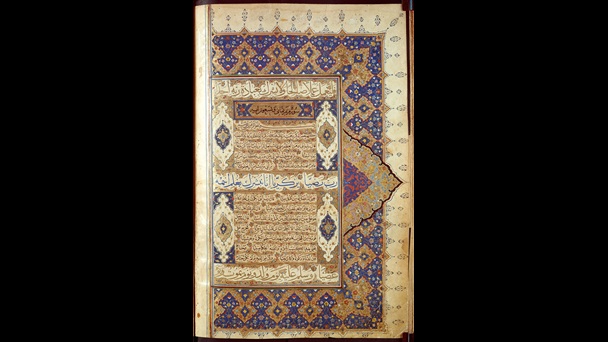 The Prophet is central to Islam, as are his progeny. However, although they are not named in the Qur’an, there are several verses that according to commentators from both Shi‘a and Sunni sources, relate to specific women. For example, Chapter 108, ‘Abundance’, al-Kawthar, relates to the Prophet and his daughter Fatima. Likewise, God rewarding goodness with goodness (Qur’an 55.60) refers to the Prophet’s first wife Khadijah and her monetary support of the faith in its early years. Equally, however, God does not shy away from reprimanding two wives of the Prophet (Aisha and Hafsa) who conspired against him and hurt him, which thus resulted in God chastising them and threatening them with divorce (Qur’an 66.1). God told all the wives that if they do good their reward will be double that of other women (Qur’an 33. 28–31). So women from the Prophet’s family are referred to in the divine text, albeit indirectly. 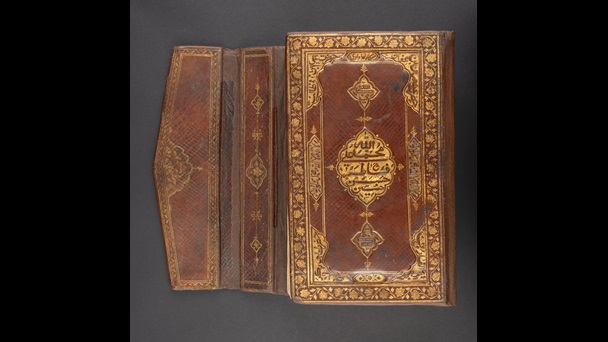 The bindings of Tipu Sultan's personal Qur'an, showing the names of God, Mohammed, his daughter Fatimah, and her sons, Hassan and Hussein, stamped in a medallion on the middle of the cover.

Who are the important female figures in Islam?

There are four women in Islamic sources, both Shi‘a and Sunni, who are given the status of the most revered women in Islam: Asiya wife of Pharaoh, Mary mother of Jesus, Khadija wife of the Prophet and Fatima, the daughter of the Prophet and Khadija. Apart from these women, for Sunnis, Aisha the wife of the Prophet is revered as a role model and narrator of hadith (Prophetic narrations). For Shi‘as, of these four, Fatima occupies a higher status as the mother of the Infallible Imams. Shi‘as also revere the mother of Ali, the Prophet’s successor, cousin and son-in-law, because she gave birth to Ali in the Ka‘bah itself: he is the only person in Islamic history to be born in the Ka‘bah, and his mother Fatima bint Asad is the only woman in history to have given birth in the Ka‘bah.

Sources of Islamic law, both primary (Qur’an and Sunnah) and secondary (biographies of prophets, theological legal texts) contain many narrations from women. In Sunni traditions, many of these narrations can be traced back to Aisha, especially on private female matters. In Shi‘a sources, many are traced back to Fatima: while she only lived ninety days after the Prophet’s death, she narrated many hadiths. In both schools of thought, other women continued to play significant roles throughout history. Karima al-Marwaziyya was considered a great commentator in the 11th century of the Bukhari hadith collection. Rabia al Adawiya is revered as a great Sunni Sufi. 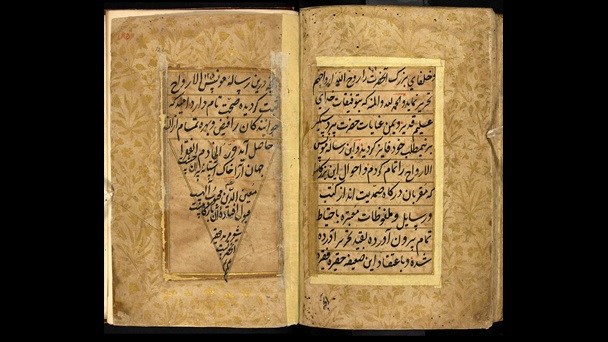 An autograph copy of the Mughal Princess Jahanara’s Muʼnis al-arvāḥ (‘The Confidant of Spirits’), a biography of the famous Sufi saint Muʻin al-Din Chishti. A devoted Sufi, she was also an accomplished scholar.

Within the Shi‘a tradition, the Prophet’s granddaughter Zaynab, who witnessed the massacre at Karbala in 680, was one of the early authorities on Islamic history. The Prophet’s wife Khadija features extensively in early sources as the richest businessperson of her time, foremost amongst all of Arabia’s entrepreneurs. The Prophet’s wife Umm Salama is also a narrator of hadith traditions.

Islam is a textual religion, that is, daily Muslim life is regulated by laws found in divine scripture. These laws go as far as to dictate how a Muslim should dress. There has been a lot of focus in recent years on Muslim women’s dress. The Qur’an, however, rules on both male and female apparel, and addresses men before it addresses women on this issue. Men are told to lower their gaze and guard their modesty. Women are also told the same, with the addition of extending their headscarves over their chest. Islam believes that moral societies can only be achieved by regulating the extent to which non-related men and women may mix freely, and while societies need not be entirely segregated (due to the practicalities of business, schooling and medical needs), dress laws will allow for a form of segregation.

However, as most Muslim societies are patriarchal, the God-given rights enshrined in the Qur’an are not always honoured, and women’s rights have been eroded on many levels. Some modern-day Muslim societies are repressive of women’s rights. Access to education, for example, is not given to women on the same level as men in deprived societies such as Pakistan. In feudal areas, property is almost inevitably usurped by male family members. Saudi Arabia, up to now, has not legally allowed women to vote, drive or go out of the house without a chaperone. Egypt has very poor health services in rural areas, which affects women the most due to poor gynaecologic and obstetrics provision. Iraq has many female-headed family units living under the poverty line due to war, so women in effect have to become the breadwinners rather than retain their income as personal wealth, as per the Qur’an. Hence, while Islam as a faith gives women many legal rights, social realities often erode these. Some Islamic societies, on the other hand, show the opposite tendency. Malaysia has excellent female representation in business, education and employment and Iran has more women at universities than men.

Muslim women’s rights advocates and Muslim feminists argue that the erosion of God-given rights does not justify or necessitate external Western interference, but rather requires the societies themselves to return to God’s laws. These, however, are open to interpretation. Conservatives from literalist Salafi Sunni theology and the political Muslim Brotherhood demand that women should retreat to domestic home-based roles. But modern and interpretive theological groups believe that women’s roles vary according to the demands of the time: for Shi‘as women should play an active role in participating in political dissent against injustice; women should lead as teachers, scholars and government advisors, such as the Iranian Zohreh Sefati. In the West, Muslim Sunni feminist scholars such as Amina Wadud and Riffat Hassan lead on theological discourse that is determinedly inclusivist. Certain women converts have also stood out in the pages of history, such as Lady Evelyn Cobbold, a Scottish noblewoman who converted in 1933 and went on to perform pilgrimage and write about her experiences. On a grassroots level, Musawah is a global movement advocating for equality and justice in the Muslim family. Hence new readings reflecting equity are constantly being undertaken by both Muslim men and women who take equal rights and God-given human dignity very seriously.