A close reading of Donne’s ‘Song: Go and catch a falling star’

Toby Litt shows how Donne creates a mischievous relationship with his readers, as the poem builds energy and plays around with time and space.

Let me start with something that could not be more obvious. When he wrote his song ‘Goe, and catche a falling starre’, John Donne was alive. 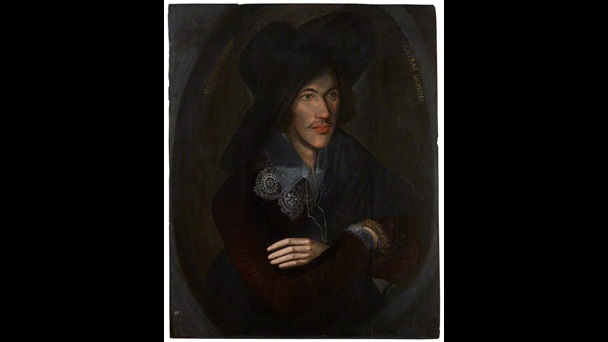 The poet, when he was a young man of around 24 years old.

I don’t mean that as a human being he only felt truly alive when writing poetry (though that’s probably true).

What I mean is more basic: that a man called John Donne was a living, breathing, changing, reacting being when he dipped his quill into an inkpot and first wrote these lines – lines we can read over three hundred years later. 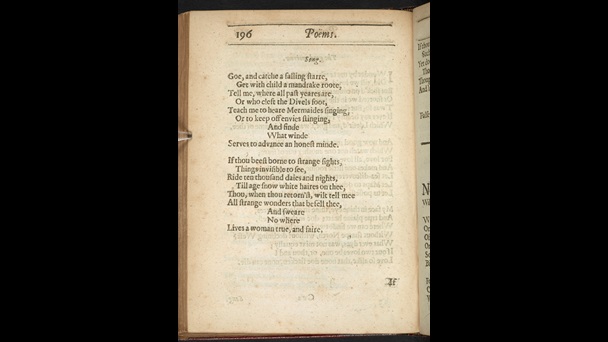 ‘Song, Go and catch a falling star’ was first printed, after Donne’s death, in this 1633 edition.

It is possible Donne had dreamed the whole poem up weeks before he wrote it down, and had thought of it, now and again, to tinker with it, as he walked or rode a horse or lay in bed. Yet at one point in its making, the latest word he scratched onto the parchment was wetter and darker and less absorbed than those preceding it, and his breath coming warmly down helped that word to dry.

Books are dead, and words are inanimate, and sometimes writers make a virtue of this. Some writers want to address the reader not from the position of a fallible person but from that of a perfect text. In this poem, and in many others, Donne wants to be as humanly present as he can be. Like he’s in the room with us, having an effect on us. And so, Donne keeps telling the reader what to do. He starts by telling them to:

If the poem ended here, the reader would have received a direct order, in the imperative, and would be left wondering where exactly the poet had meant them to ‘Goe,…’

Here, Donne immediately establishes a living relationship between himself and the reader.

Works by John Donne and Ben Jonson in the Newcastle Manuscript 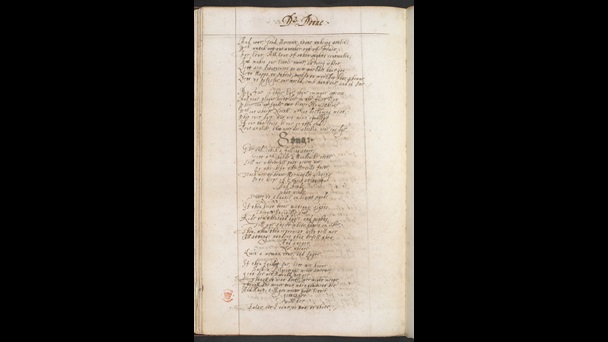 In Donne’s day, readers often copied his poems into personal anthologies like this one. This manuscript, containing the ‘Song’, was owned by Sir William Cavendish, the first Duke of Newcastle.

‘Goe,…’ doesn’t just demand engagement in the space the reader occupies, it commands movement away from that space. And the thing is, the living reader could obey – they could, because they are alive, go, in the moment that follows the order. But Donne is not just very bossy, he is also very mischievous. No sooner does he make a demand on the reader than he undoes it by making that demand impossible.

...and catche a falling starre,…

The comically super-obedient reader, halfway out the door, or mentally readying themselves for departure once they hear where they should go, is halted and a little humiliated.

In terms of space and time, what Donne orders the reader to do is very complicated. Think about it. To even try ‘to catche a falling starre…’ would require the reader to spend night after night looking up at clear, starry skies in hopes of seeing a falling star to then hopelessly sprint off after.

I began by reminding you that Donne was alive when he wrote his poetry. I’m going to continue by reminding you that you are alive as you read it. These are the givens of the situation of a poem on the page seen by eyes looking down – as your eyes are looking across or down at this screen – at words in a language they understand. But these givens can very easily be covered up or ignored.

If a poem describes a beautiful flower, it doesn’t insist on anyone’s being alive. The most such a poem does is say, ‘If you can apply these words to a flower you’ve seen, feel free to do so.’ What it certainly doesn’t do is boss the reader about. It doesn’t say, ‘Goe!’

Donne’s next order also involves travel, and a lot more than travel:

Get with child a mandrake roote,

‘Get with child’ means impregnate. A mandrake is the root of a variety of plant. Enough said.

For the next lines, the reader is expected to be back in the room with Donne, having completed the research and taking time out to

Tell me, where all past yeares are
Or who cleft the Divels foot

Then some kind of journey together, a sea voyage of poet and reader, is expected.

Teach me to heare Mermaides singing

The next demand is more like an emotionally needy request

Or to keep off envies stinging

We seem to be back in the same room with Donne, but the final lines take us out to sea again:

And finde
What winde
Serves to advance an honest Minde.

At least in anticipation, Donne is pinging his reader and himself around in time and space almost as frantically as Steven Moffat does Doctor Who.

In the second stanza, Donne acknowledges that only certain people, and he doesn’t know if the reader is one, would be capable of such impossibilities:

If thou beest borne to strange sights,
Things invisible to see,
Ride ten thousand daies and nights,
Till age snow white haires on thee,
Thou, when thou retorn’st, wilt tell mee
All strange wonders that befell thee,
And sweare
No where
Lives a woman true, and faire.

In comparison to the first stanza, this transforms the reader into a fairytale figure setting off on a magical quest (a male figure, a Handsome Prince, because a Beautiful Princess could not possibly be imagined to ride that far). 10,000 days is just over 27 years, so although it sounds very long it’s not beyond a human life-span.

Only in the final line of the second stanza do we arrive at the real subject of the poem – the question it has been aiming for all along. Is there a woman both true and fair? This is an entirely conventional question for Elizabethan love poetry.

In the third stanza, we reach the point that I – in emphasizing Donne’s aliveness as he wrote and your aliveness as you read – have been aiming for along. But first I need to mention my third really obvious thing: some poetry, including this poem of Donne’s, rhymes.

Now, there have probably always, in all cultures, been bards and rappers who could spontaneously compose verses, but they tend for simplicity’s sake to make these verses rhyme aa bb cc or aaaa bbbb. Donne’s rhyme scheme is ababccddd – probably within the capabilities of a really good rapper, but quite a stretch to do it three times in a row, and hit all the right beats.

In other words, there’s no way that this is an entirely spontaneous utterance. It has taken time to make the rhythm and the rhyme. I have been reading the poem as if Donne’s orders came out one after the other, just so. But they are clearly crafted. He has had at the very least a few minutes to change them. So why, in the third stanza, do we come to this moment:

If thou findst one, let mee know,
Such a Pilgrimage were sweet;
Yet doe not, I would not go,…

The whole poem has been building energy, tending faster and faster towards a journey off to meet the woman true and fair. But Donne in three words says that even if such an impossible person exists, he isn’t bothered to meet her. Huh?

Bathos is the technical term. But what I want to point out is that this is the moment where the poet, even in a crafted and rhyming poem, is most spontaneously alive. Because he changes his mind. With ‘such a Pilgrimage were sweet’ he’s packed and heading off to the Holy Land. With ‘I would not goe’, he’s sulking in his closet.

Though at next doore wee might meet,
Though shee were true, when you met her,
And last, till you write your letter,

Compare this to the balanced, image-heavy lines of the first stanza – it really wants to seem like the most offhand thing a person could say. The lines are deliberately scrappy; two in a row begin with ‘Though’, ‘meet’ is varied only as ‘met’. Every word is monosyllabic between ‘Pilgrimage’ and ‘letter’, and after that the rest of the poem is also desultory monosyllables. It also concludes by rhyming on ‘eee’, the easiest, laziest of all English rhymes, as every parent who’s heard their child compose an ‘Ode to Wee’ will know. The syntax is scrabbled, self-correcting:

Though shee were true, when you met her

is far less elegant than the obvious

Though when you met her shee were true

Having shown he can change his living mind, Donne now changes the moment by moment meaning of what he is saying. From the very few lines left, the reader knows the poem is ending soon. He shifts his tone, becomes despairing, then sarcastic, then outrageously cynical.

Though she were true, when you met her,
And last, till you write your letter,
Yet shee
Will bee
Falfe, ere I come, to two, or three.

Donne’s living attitude has shifted, by the end of the poem, from bossiness to cynicism. By changing his own mind, on paper, he’s messed with the reader’s head.