An introduction to the poetry of Aemilia Lanyer

Aemilia Lanyer was one of the first Englishwomen to publish a volume of original verse. Christina Luckyj analyses her long religious poem Salve Deus Rex Judaeorum, the bittersweet ode 'The Description of Cooke-ham' and the ways in which Lanyer presents herself as a poet.

It is perhaps inevitable, if ironic, that Aemilia Lanyer has long been linked to William Shakespeare. Four years his junior, Lanyer at age 18 became the mistress of Henry Carey, Queen Elizabeth’s Lord Chamberlain, the very man who later became the patron of Shakespeare’s theatre company. Like Shakespeare, she lived in London on the fringes of the court and cultivated the favour of powerful people. Historian A L Rowse made a case for her as the beautiful but treacherous ‘dark lady’ of Shakespeare’s sonnets, and theatre director John Hudson has even proposed her as co-author of Shakespeare’s plays, Emilia in Othello serving as ‘a contemporary allegory’ for Lanyer herself. Yet Lanyer could not be further from either Shakespeare’s sensuous dark lady or his Emilia, whose ‘feminist’ defence in the 1623 Folio claims for women a sexual appetite and capacity for ‘revenge’ equal to men’s (4.3.85–102). Unlike Shakespeare’s Emilia, Lanyer exalts female spirituality and virtue. Unlike Shakespeare, she is a serious devotional poet whose poetic ambitions invite comparison with John Milton. Intensely conscious of her unusual status as ‘A Womans writing of divinest things,’ Lanyer boldly transforms biblical sources to rewrite the place of women in history and culture in Salve Deus Rex Judaeorum, her lengthy religious poem published in 1611 together with a set of other verse. 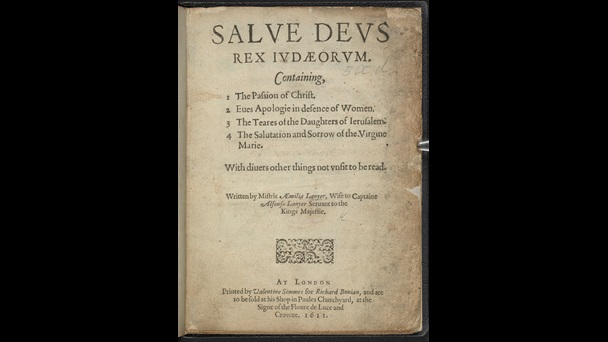 Daughter to Venetian-born court musician Baptista Bassano and his English wife Margaret Johnson, Aemilia Lanyer grew up as a member of the minor gentry with access to the royal court. As a child in the household of Susan Bertie, Dowager Countess of Kent, Lanyer probably benefitted from a classical humanist education including studies in history, rhetoric, arithmetic, geometry and astronomy. Orphaned at age 18, she was soon ‘maintained in great pomp’ by Henry Carey Lord Hunsdon, a man 45 years her senior. Pregnant with his child (named Henry after his father), she hastily married her distant cousin Alphonso Lanyer, another court musician intent on making his name as an adventurer and speculator. Her ambitions clearly matched her husband’s: when she consulted astrologer Simon Forman in 1597, she worried not only about her repeated miscarriages but also about the couple’s prospects for advancement at court. The following year she gave birth to a daughter, Odillya, who lived only nine months.

In 1604–05 Lanyer may have served as music tutor to Anne Clifford, teenage daughter of the eminent Puritan Margaret Clifford, Countess of Cumberland. Estranged from her husband before being widowed in 1605, Margaret fought a long and bitter battle against men – including her husband and King James I – to regain her daughter’s rightful inheritance from the male relations named in her husband’s will. Her struggle, as well as her political and religious views, undergird the poetry Lanyer produced in her honour. For it was probably while sojourning with the Cliffords in 1604–05 at Cookeham (an estate leased to Margaret’s brother) that Lanyer composed her 2000-line poem Salve Deus Rex Judaeorum at Margaret’s request. When the poem was printed six years later, Lanyer added ten prefatory dedications to powerful female courtiers and a concluding 200-line elegiac paean (lyric poem) to the women’s time at Cookeham.

The central poem, Salve Deus Rex Judaeorum, a meditation on the Passion of Christ, allows the poet to conflate the sufferings of Christ on the Cross with those of both Margaret Clifford, ‘plunged in waves of woe’ (p. 52), and the poet herself, ‘clos’d up in Sorrowes cell’ (p. 8). Just as Christ’s sufferings are ultimately redeemed, so Margaret’s ‘patience, faith, long suffring’ will be rewarded with ‘comforts from above’, promises the poet. ‘All those that feare him shall possesse the land’, she asserts boldly, while God’s vengeance will ‘burne up all his en’mies’ (pp. 54–55). The struggles of the Clifford women against the patriarchal system are reflected in the poem: Lanyer’s Passion narrative builds creatively on biblical accounts to present tyrannical men (Caiaphas, Pilate, Herod) as entirely responsible for the Crucifixion, while women (Pilate’s wife, the Daughters of Jerusalem, the Virgin) merely plead, cry, or mourn during the terrible event. Lanyer’s inventive defence of Eve, meanwhile, roots her sin in her guileless simplicity and praiseworthy desire for knowledge. 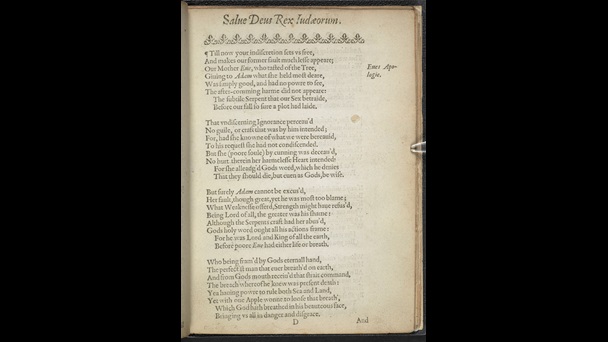 In the section of the poem referred to as 'Eve's Apologie in defence of Women', Lanyer writes: ‘But surely Adam cannot be excus’d, / Her fault, though great, yet he was most too blame; / What Weaknesse offerd, Strength might have refus’d, / Being Lord of all, the greater was his shame’.

John Lydgate, The Fall of Princes 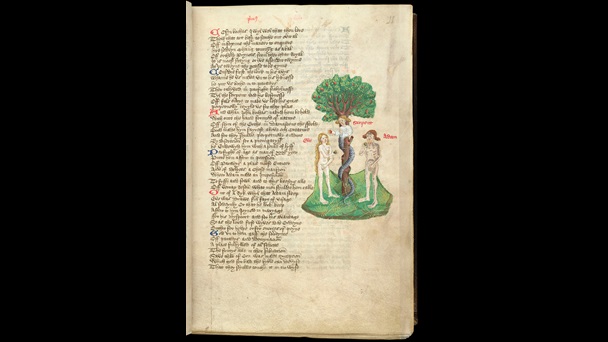 A medieval depiction of the serpent tricking Eve into disobeying God and eating the fruit from the Tree of Knowledge.

This spirited acquittal of women places the poem in the popular genre of the querelle des femmes (meaning ‘the woman question’; a controversy that generated both attacks on and defences of women). Such pro-woman works could also have political meaning at a time when a misogynistic, quasi-tyrannical king was imposing his arbitrary will on Church and state. In this way, Lanyer’s work pays homage to Margaret Clifford’s Puritan concerns both with the unmediated relationship between Christ and faithful believer, and with the necessary limits on monarchical power that can too easily turn to tyranny.

In the preceding dedications to powerful women of the court (including Queen Anne), Lanyer strategically presents herself as unlearned. This invokes both the modesty claimed by classical authors as ground for authority and the Christian virtue of humility. Much like Christ himself, who appears ‘naked, poore, and bare’ (p. 109), the poet/speaker presents her work ‘in poore apparel, shaming to be seene’ (p. 6). Yet, just as Christ’s human abjection coexists with his divine glory, the poet’s feminine weakness makes her a fit vessel for the ‘powerfull Grace’ that infuses the work that she believes she was ‘appointed to performe’ by God (p. 139). Lanyer’s claim to divine grace becomes a powerful means of persuading other women to reveal their own state of grace by granting their ‘grace’ – favour – to Lanyer herself, i.e. to patronise her. If they support a divinely chosen poet to write their ‘never-dying fame’ on earth (p. 51), they can advertise their own spiritual election to receive salvation.

Yet despite the compliments she showers on her dedicatees, Lanyer never merely flatters them. Figured as a ‘mirror’ of her patrons’ minds and virtues, her work shows them a reflection not only of who they are but also of who they should be. As Christ is ‘the mirror [model] of Martyrs’ (p. 79), so the poem presents an ideal of virtue to be imitated. In Lanyer’s dedication to Anne Clifford, for example, the young woman is urged to live up to the virtues of her noble ancestors (pp. 43–44). Lanyer continually instructs her patrons even as she praises them. 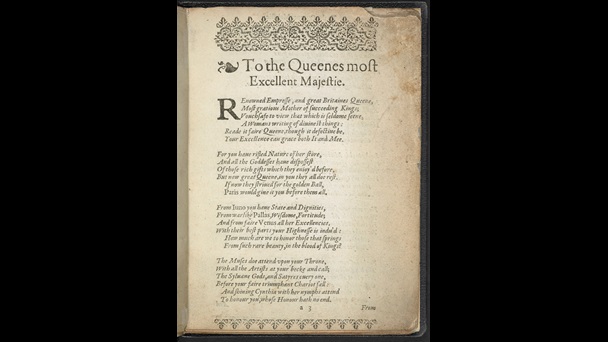 ‘The Description of Cooke-ham’: A bittersweet ode

The concluding poem, ‘The Description of Cooke-ham’, adopts quite a different form and tone. Written in rhyming couplets rather than the main poem’s eight-line stanzas of ottava rima, ‘Cooke-ham’ is Lanyer’s bittersweet ode to the intellectual and spiritual pleasures she shared with Margaret Clifford and her daughter. Unlike Ben Jonson’s ‘To Penshurst’, a ‘country house poem’ that celebrates the worldly power of a generous landowner, Lanyer’s poem praises the spiritual power of a woman for whom the Creator is the ultimate landowner. As a female Moses or David – or as a new Eve in a garden of redemptive knowledge – Margaret Clifford communes with Christ, represented by the ‘stately Tree’ that serves as her refuge in the spiritually infused pastoral landscape (p .132). Yet Lanyer’s praises of Margaret Clifford and this Edenic ‘Paradice’ (p .52) are haunted by an elegiac sense of loss tinged with resentment. 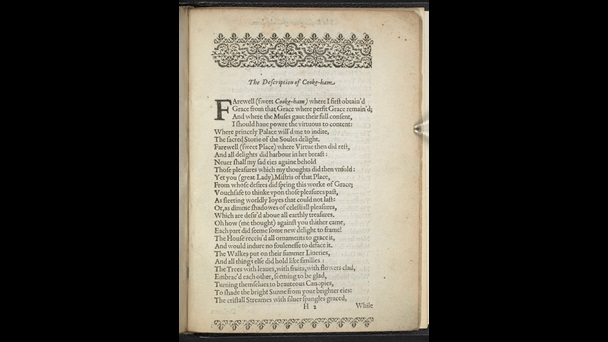 ‘Farewell (sweet Cooke-ham) where I first obtain’d / Grace from that Grace where perfit Grace remain’d’: the beginning of 'The Description of Cooke-ham'. 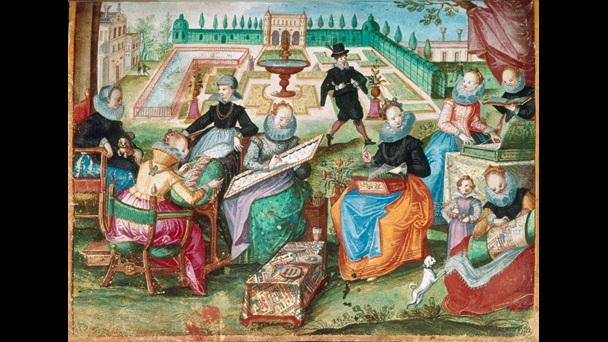 Early 17th-century painting of women socialising and embroidering together in a garden belonging to a country house.

Whereas at Cookeham the poet ‘did alwaies beare a part’ in the women’s shared pleasures (p. 135), she now writes from the position of one who, like the house and the landscape, has been cast off. Recounting a curious incident in which Margaret, at her departure, mournfully bestows a kiss upon the tree rather than the poet, Lanyer wreaks her revenge by stealing the kiss and refusing to return it (p. 137). While outwardly blaming mutability, Fortune or the class system for driving a wedge between them, Lanyer indirectly warns Margaret of the dangers of neglecting her. Although the poet initially identifies herself with Ovid’s Philomela, the ravished woman transformed into a nightingale that ‘warbles forth her paine’ (p. 8), she is by the end of the poem silenced, ‘Drownd in dead sleepe, yet can procure no pittie’ (p. 138). Lanyer’s threat of self-erasure serves to remind Clifford of the poet’s power to immortalise her name and advertise her virtues, lodged in the poet’s ‘unworthy breast’ and recorded in the public text of the poem. Though we have no evidence that the Clifford women heeded her call for patronage, Salve Deus Rex Judaeorum remains a monument to Aemilia Lanyer’s extraordinary poetic skill and ambition.