Using a close analysis of the characters’ traits, actions and language, Carol Atherton considers how Shakespeare presents Goneril, Regan and Edmund as the villains of King Lear.

King Lear is, at its heart, a play about the relationships between two powerful men – King Lear and the Earl of Gloucester – and their ungrateful children. The play’s chief irony is that the children that Lear and Gloucester believe to be ungrateful are actually loyal, while those whom they believe to be loyal are plotting against them. Goneril and Regan, King Lear’s two elder daughters, and Edmund, Gloucester’s illegitimate son, are the children who turn against their elderly fathers. Their actions, in both the main plot and the sub-plot of the play, run in parallel with each other, and bring about the downfall and eventual death of both Lear and Gloucester.

Photographs of John Gielgud as Lear, 1955 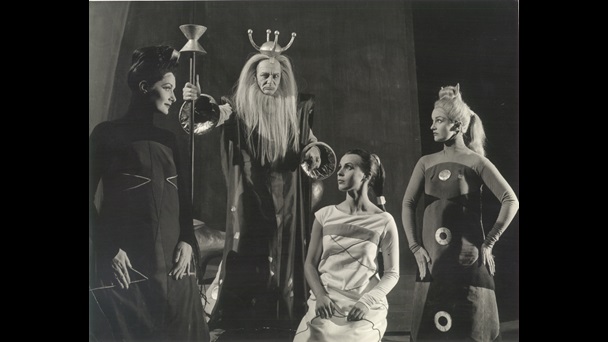 How does Shakespeare present Edmund, Goneril and Regan as villains?

When King Lear invites his daughters to tell him how much they love him, Goneril and Regan are only too willing to play along. Nevertheless, they are clearly mistrusted by their younger sister Cordelia, who asks ‘Why have my sisters husbands, if they say / They love you all?’ (1.1.99–100). After her banishment, Cordelia commends her father to her sisters’ ‘professèd bosoms’ (1.1.272) – a clear sign that we are not meant to take their words at face value. Kent shares Cordelia’s lack of trust, hoping that Goneril and Regan’s ‘large speeches’ (1.1.184) will be matched by their deeds.

It is not long before the sisters’ self-interest starts to show itself. In Act 1, Scene 3, Goneril instructs her servant, Oswald, to be rude to Lear, and it is her attempt to persuade Lear to reduce the number of knights in his retinue that precipitates Lear’s descent into madness. The elderly king looks to Regan for sympathy, but receives none. And when the agonised Lear goes out into the night, Regan insists that the gates of Gloucester’s castle should be barred against him despite the impending storm, commenting of ‘wilful men’ that ‘The injuries that they themselves procure / Must be their schoolmasters’ (3.1.303–304). In other words, Lear must learn from his mistakes.

Both sisters are also cruel in their treatment of other characters. Regan insists that Kent should stay in the stocks all night, rather than just until noon, as Cornwall originally intends. Both are quick to suggest how Gloucester should be punished for his supposed treachery:

Goneril   Pluck out his eyes.

Regan eggs on Cornwall in carrying out Goneril’s suggestion, plucking Gloucester’s beard in a further sign of disrespect. She also stabs the servant who kills Cornwall. Goneril, meanwhile, treats her husband, Albany, with contempt, and makes no secret of her lust for Edmund and resentment of her sister’s newly widowed status.

Perhaps fittingly, it is the sisters’ rivalry over Edmund that brings about their eventual deaths. Edmund swears his love to both, and says, in a soliloquy, that ‘Neither can be enjoyed / If both remain alive’ (4.7.58–59). The envious Goneril poisons Regan, and then stabs herself. Jealous and self-seeking, both are guilty of wanting more than they are truly entitled to. Ultimately, it is their own villainy that consumes them.

Edmund’s main personality trait is his capacity for duplicity. He schemes against both his father and his half-brother, Edgar. We are told of his status as Gloucester’s illegitimate son at the beginning of Act 1, Scene 1, and in Act 1, Scene 2, we are given a clear picture of the resentment that Edmund feels at not being his father’s legitimate heir. Shakespeare makes his manipulative nature completely unambiguous, showing Edmund tricking Gloucester into thinking that Edgar is plotting against him, pouring scorn on Gloucester’s superstitious fears about the breakdown of society, and taking advantage of the unwitting Edgar by telling him that his father has turned against him. In Act 2, Scene 1, Shakespeare even shows Edmund wounding himself and lying to Gloucester about Edgar’s actions – a shocking indication of Edmund’s calculating personality.

Edmund is often presented as an attractive, charismatic character, and his magnetism draws the attention of both Goneril and Regan, bringing about a love triangle that will lead to the deaths of both sisters. Yet the audience is always aware of Edmund’s potential for evil. In Act 5, it is Edmund who has Lear and Cordelia imprisoned, and orders that Cordelia should be hanged. In the last moments of his life, after he has been fatally wounded by Edgar, Edmund retracts this order, in an indication that he may possess some shred of humanity – but it is too late, for Cordelia has already met her death.

King Lear Weeping over the Dead Body of Cordelia, by James Barry 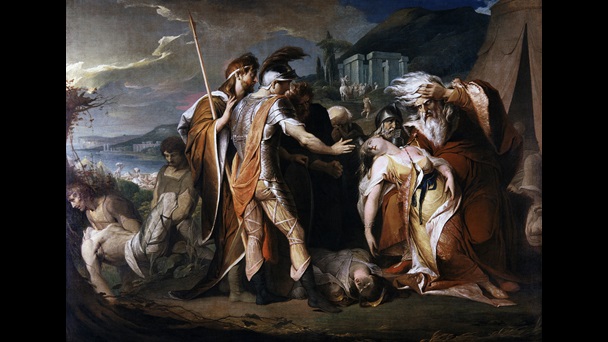 Act 5, Scene 3: while Lear weeps over Cordelia little remorse is shown for the deaths of Edmund (far left), Goneril and Regan (centre).

All three of the villainous children in the play are characterised by their flair with language, in contrast with their less articulate siblings. In the love-trial of Act 1, Scene 1, both Goneril and Regan make huge claims about their love for their father, claiming that it surpasses any other kind of happiness they can imagine:

Goneril Sir, I love you more than [words] can wield the matter,
Dearer than eyesight, space, and liberty,
Beyond what can be valued, rich or rare,
No less than life, with grace, health, beauty, honour;
As much as child e'er lov'd, or father found;
A love that makes breath poor, and speech unable:
Beyond all manner of so much I love you. (1.1.55–61)

Regan  I am made of the self metal as my sister,
And prize me at her worth. In my true heart
I find she names my very deed of love;
Only she comes too short, that I profess
Myself an enemy to all other joys
Which the most precious square of sense [possesses],
And find I am alone felicitate
In your dear Highness' love. (1.1.69–76)

Their verbose declarations, spoken in long, fluent sentences, make Cordelia’s inability to express herself all the more striking.

Edmund, meanwhile, uses his quick-wittedness to outsmart his father and brother, dominating the scenes in which they appear. He also speaks the play’s first soliloquy, a complaint about his status in which he plays with the concepts of ‘bastardy’ and ‘baseness’ in a series of angry rhetorical questions:

Illegitimacy in Shakespeare’s time was viewed as a sign of degeneracy and corruption – the sins of the parents leaving an indelible mark upon their offspring. Edmund, however, tries to assert an alternative morality. He believes that he was conceived in more honest circumstances than his legitimate brother, with his own birth being the result of ‘the lusty stealth of nature’ (1.2.11) rather than the tired conventions of marriage. As a result, he appeals to Nature to be his ‘goddess’ (1.2.1), and to the gods to ‘stand up for bastards’ (1.2.22), rejecting the ‘plague of custom’ (1.2.3) that declares him to be inferior. 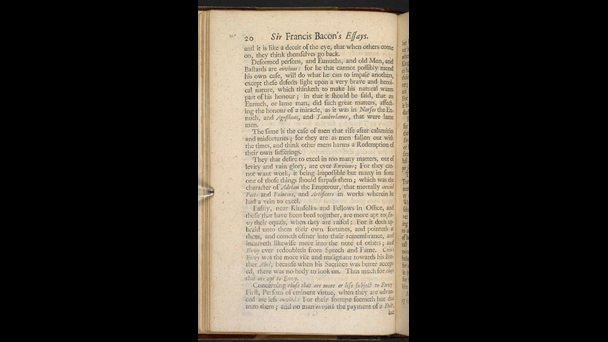 Francis Bacon, the celebrated philosopher and statesman, wrote about the envious and often villainous nature of bastards in his Essays.

The actions of Goneril and Regan play a key role in Lear’s tragic downfall. During Lear’s confrontation with Goneril in Act 1, Scene 4, we see the first indications that Lear is aware of what he has done wrong – in other words, the first signs of Lear’s anagnorisis (a critical moment of realisation in a play). Regan’s insistence on barring the gates of Gloucester’s castle, meanwhile, ensures that Lear is shut out on the heath in the storm – leading to the central scenes in which he rages at the elements and gains a new perspective on human existence.

Edmund, meanwhile, is a classic example of the Machiavel, a character named after the Florentine statesman Niccolò Machiavelli (1469–1527). The Machiavel uses his cunning to manipulate others and ensure that he gets what he wants, being driven entirely by self-interest. Edmund takes advantage of the credulous natures of both Gloucester and Edgar, and revels in the fact that he is able to do so. Significantly, Edmund is fully aware of his unscrupulous nature, and sees it not as a result of his illegitimacy but simply as who he is:

Edmund  I should have been that I am, had the maidenliest star in the firmament
twinkled on my bastardizing. (1.2.131)

It is possible to interpret all three characters in ways that challenge the simple category of ‘villain’.

Many feminist critics have explored the patriarchal society in which Goneril and Regan have grown up. Cathy Cupitt draws attention to the oppressive nature of this society, and asks ‘Surely there must be consequences to this kind of oppression, however benign? Is it really so surprising that people who seem to have had little power in either the domestic or political spheres should behave inappropriately when power is given to them?’ Coppelia Kahn, meanwhile, offers a psychoanalytic reading, seeing Lear’s anger with his daughters in terms of a child’s desire to control his world. When Lear does not get what he wants he explodes with ‘childlike rage’, casting his daughters in the role of his long-dead mother.

Explorations of Edmund’s character have focussed on his exclusion from the social order. A Marxist interpretation of Edmund would focus on the injustice of the laws of inheritance, and might also see his Machiavellian scheming as reflecting the fact that Edmund has only himself to rely on. Michael Gould, who played Edmund in the Globe Theatre’s 2001 production, said that ‘The fact that Edmund is an illegitimate child is his identifying feature in the world of the play and he is angry with this. On one level he is admitting that this is his identity and he does not care what anyone thinks, but I do think he is damaged by it’.