Clothing and transformation in The Taming of the Shrew

Emma Smith explores how clothing complicates ideas about gender and social status in The Taming of the Shrew.

Among the varied cast of characters across Shakespeare’s plays, there are two representations of tailors. One, Robin Starveling, joins his fellow craftsmen in rehearsing ‘Pyramus and Thisbe’ in the woods outside Athens in A Midsummer Night’s Dream. The other professional clothes-designer and maker appears in the comedy most insistently concerned with issues of dress, status and gender: The Taming of the Shrew. In Act 4, Scene 3 the Tailor is brought to the house of Petruchio as part of his extended humiliation of his new wife Katherine. She has been denied food and sleep, and now the final necessity to be weaponised in their marital warfare is clothing. While Katherine approves of the Tailor’s work, suggesting that ‘I never saw a better-fashioned gown, / More quaint, more pleasing, nor more commendable’ (4.3.101-102), Petruchio theatrically rejects this ‘ruffling treasure’ (4.3.60). In the course of his denunciation of the Tailor’s work, he reveals an unexpectedly detailed appreciation of fashionable women’s garments:

The man who 'lackey' (3.2.65) arrived at his master's wedding as ‘a very monster in apparel’ (3.2.70) declaring ‘To me she’s married, not unto my clothes’ (3.2.117) turns out to have both a distinct sensibility for fabrics and cuts and a finely calibrated understanding of the social sign-system of clothing. Having refused the new gown, he announces that the newlyweds will return to Padua in ‘honest mean habiliments’ (4.3.170): for, preaches Petruchio cheerfully as they set out on foot through the night, ‘’tis the mind that makes the body rich’ (4.3.172). Petruchio arrives at his own wedding, zanily dressed in ‘a new hat and an old jerkin’ and ‘a pair of boots that have been candle-cases’.

Clothing is thus one expression of the gendered social battleground that is Petruchio and Katherine’s relationship. When Petruchio wears a zany outfit to his wedding, just as when he rejects the Tailor’s work on Katherine’s wardrobe, he is furthering his own controversial programme of training and bullying. Costume functions as a visible indicator of social convention or transgression. Petruchio’s technique is to play off, and against, custom: bringing the unruly Katherine into line through behaviour that is itself challengingly confrontational. When he suggests that their clothing is ultimately unimportant, the ‘madcap ruffian’ (2.1.288) shows himself to be at odds with a world in which Bianca is sold off to the highest bidder, even as he himself admits he has come to Padua to find ‘one rich enough to be Petruchio’s wife’ (1.2.67).

That outward appearance, and particularly costume, symbolises authority and power is not confined to the Tailor’s scene in the play. Everyone, from the elderly suitor Gremio boasting to Bianca’s father of his riches in ‘costly apparel’ (2.1.352) to Tranio, the servant dressed as his master in ‘a silken doublet, a velvet hose, a scarlet cloak, and a copatain hat’ (5.1.66–67), communicates through dress. From its opening, when the drunken tinker, Christopher Sly, is tricked into believing he is a lord, The Taming of the Shrew uses costume to signal hierarchies and to impose authority. The play begins with upper-class huntsmen encountering Sly unconscious outside a tavern, and deciding ‘to practice on this drunken man’ (Ind.1.36) to see if a change of environment would change his nature. Clothing is crucial to this social experiment, and as Sly is carried off to be washed and changed, a page named Bartholomew is to be ‘dress’d in all suits like a lady’ to play his noble wife (Ind.1.106). The stage direction in the First Folio – the first printed text of the play – instructs the scene of transformation: ‘enter aloft the drunkard with attendants, some with apparel, Bason and Ewer’. As Sly attempts to assert his true identity, he does so through resistance to this lavish new wardrobe: ‘Ne’er ask me what raiment I’ll wear, for I have no more doublets than backs’ (Ind.2.8–9). As he is persuaded, however, he and his wife settle down to watch a comedy: the inset play ‘The Taming of the Shrew’. 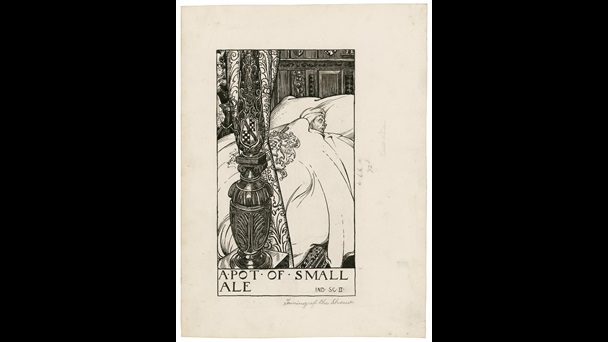 Sly, the drunken tinker, is ‘convey’d to bed, / Wrapp’d in sweet clothes’ to convince him he is a ‘mighty lord’, though they really think he’s a ‘swine’.

In one way, this use of clothing to signal status is entirely orthodox. Throughout the Tudor period, sumptuary laws attempted to dictate the fabrics and styles of clothing permitted to different social ranks. These laws had the dual aims of protecting English industries from fashionable foreign imports, and of making social status visually apparent. Gold, silk, velvets and taffeta were among the restricted fabrics, and by the end of the 16th century, permitted women’s clothing was separately itemised. But clothes also circulated: they were frequently listed in wills as items to be left to family members; servants would receive cast-offs from their masters; theatres acquired costumes so that low-born men could pass as nobles. The very portability and transferability of garments was the heart of the problem of status that they encoded. Sly, a tinker who becomes a nobleman by wearing the appropriate apparel, is the dangerous obverse of the conservative sumptuary rules, apparent proof that clothing bestows, rather than merely reflects, status. Perhaps it was less that barons were entitled to wear tinselled satin, and more that it was luxury fabric itself that made men into barons. If Tranio, the servant, can make a convincing impression of his master Hortensio simply by exchanging clothes with him and wearing a ‘color’d hat and cloak’ (1.1.207), the basis for their difference of rank looks rather uncertain. 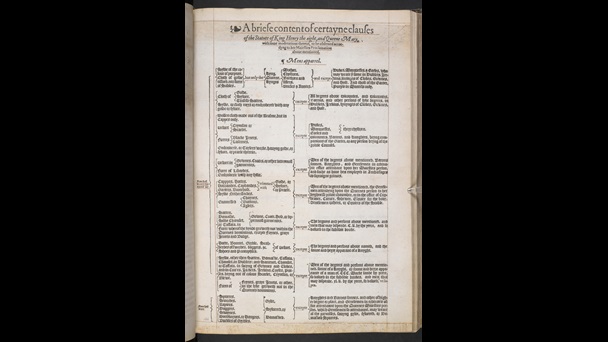 Elizabeth I issued numerous proclamations about clothing. This edict, from 1574, details the colours and fabrics people could wear according to their social rank. Only barons and others of high degree could wear 'golde' or 'tinseld sattern'. 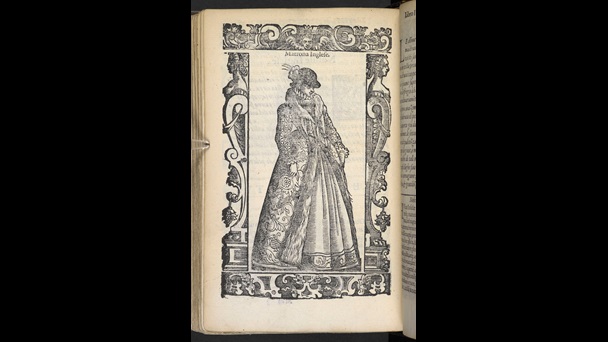 A married English noblewoman in a feathered hat, from Cesare Vecellio’s guide to global fashions, 1598. Costumes varied according to status, age, gender and local region.

As in the theatre, clothes make the man: Sly is of course an actor playing a tinker playing a nobleman (perhaps the player named William Slye in the list of the Chamberlain’s Men in the First Folio might have been cast as his namesake), just as the actor playing Bartholomew is an actor playing a man playing a woman. The role of this frame story with which Shrew begins has been much debated: does it serve as a sort of ironic quotation mark around the story of Petruchio and Katherine, encouraging us to see it as fiction, or does it amplify the force of social coercion by showing it operating on grounds of status as well as gender? Modern performances sometimes either dispense with it entirely or import a closing frame from an earlier, related but anonymous play called The Taming of a Shrew (published in 1594), in which Sly, stripped of his fancy clothing, awakes from his sozzled bender and promises to go home and tame his own wife too. 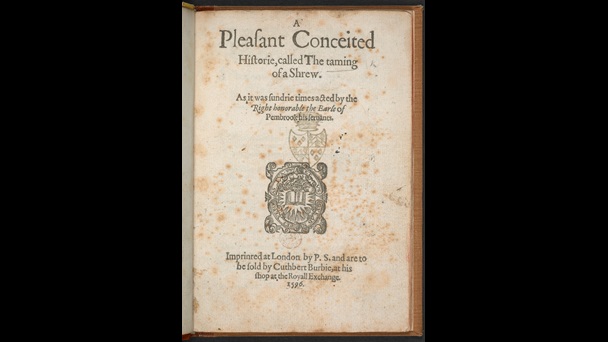 At the end of this anonymous play, Sly is stripped of his fancy clothing and goes home to tame his own wife.

The constructedness of identities

But the framing narrative complicates the play’s use of costume as a mark of social status. While in the outer play – the frame story of Sly – these impersonations through costume and gesture are laughable, in the main story of Katherine and Petruchio, they seem to work differently. Bartholomew the page may well have doubled as Katherine or Bianca in the play proper, drawing attention to the fact that these women, too, are a matter of convincing costume and the willingness of their audiences to believe in them as women. The theatres were a site of obvious and sustained transgression of the sumptuary laws: working men who ought to have been wearing russet cloth dressed themselves in the lavish costumes of kings and noblemen, and male bodies were decorated with gowns, cowls and kirtles to appear as women. 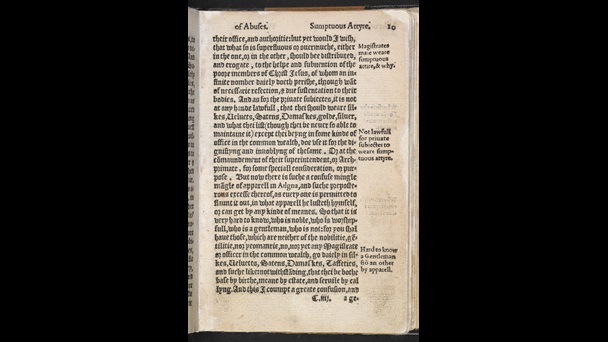 This puritanical pamphlet warns against the ‘mingle mangle of apparell’. When people wear clothes too ‘gorgeous’ for their ‘state’, it’s impossible to tell who’s really noble.

The medium disrupts the message here. Actors dressing in the clothing of their social superiors are not best-placed to police the costumes appropriate to different ranks, just as the all-male theatre was not best-placed to suggest fixed and hierarchical differences between men and women. The theatre draws cheekily insistent attention to the constructedness of identities based on outward appearances, presenting a popular idea of social status and gender as a matter not of essence but of costume.

Photographs of Dugald Bruce-Lockhart and Simon Scardifield in all-male production of The Taming of the Shrew, 2007 The conclusion of The Taming of the Shrew continues to fascinate. Summoned from her women friends to her husband, Katherine’s appearance again becomes a marital combat zone: ‘Katherine, that cap of yours becomes you not; / Off with that bauble, throw it under-foot’ (5.1.121–22). To the scorn and surprise of the other brides, Katherine obeys. Is her spirit broken, or has she learned to manage her husband in public to her own private advantage? Have the free-spirited couple united together against a conventional Paduan society, or do they continue at odds? Should we understand their antagonistic conversations as displaced erotic energy or supreme emotional incompatibility? What kind of reply should Petruchio’s famous ‘Come on, and kiss me, Kate’ (5.1.180–81) receive?  Productions and readings of the play will continue to argue. But perhaps in returning to the vexed question of the play’s gender politics, we ought to be more alert to its slyly deconstructive attitude to personal identity. If we are what we wear in The Taming of the Shrew, the play’s class and gender politics become more ambiguous, but also more radical. 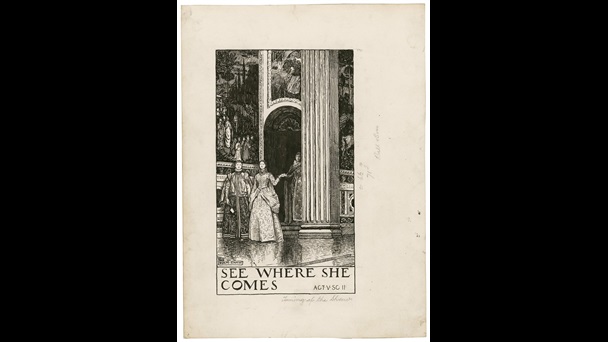 Katherina comes when Petruchio calls, and tramples her cap ‘under-foot’.